I was faced with a job that needed to heat a bit of metal to forge it to shape. The part is of a size rather on the limit of what my MAPP gas handheld torch can manage to heat to forging temperature.

The obvious answer was a blacksmiths hearth. Except that nobody sells those on a Sunday.
So I ended up trawling the shops looking for inspiration.

Eventually, from Poundland I bought a couple of dog bowls of different sizes that fit inside each other. 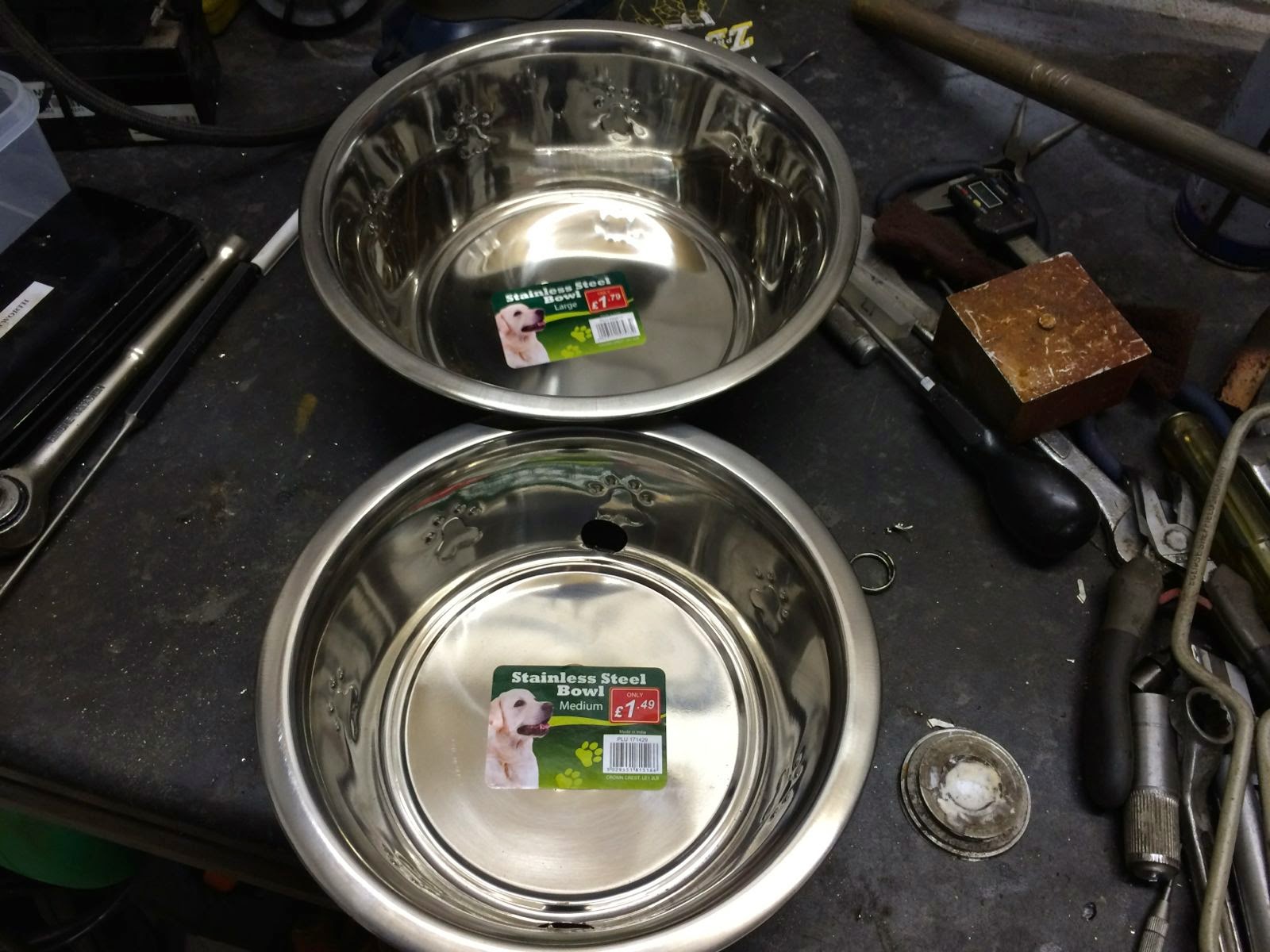 Then from B&Q I bought a couple of tubs of fire cement. I already had some steel tube, but B&Q sell that too. Ikea is a good source of stainless steel tubing too, they call it Grundtal.
It turned out that one of the pots of Fire cement had cracked and the cement was hardened, so I also ended up using some Vermiculite which I found in the shed. (B&Q also sell that but more fire cement would have worked too.)

For a blower I went to Go-Outdoors and got an airbed inflator. Poundland had those too, but the Go-Outdooors one was 240V powered.

So, I drilled a hole through both sides of the small bowl and one side of the big one. Then pressed-flat a dollop of fire cement in the bottom of the large bowl, then squished the smaller one in until the holes all lined up and I could put the tube in.
I then filled up the gap round the outside with vermiculite: 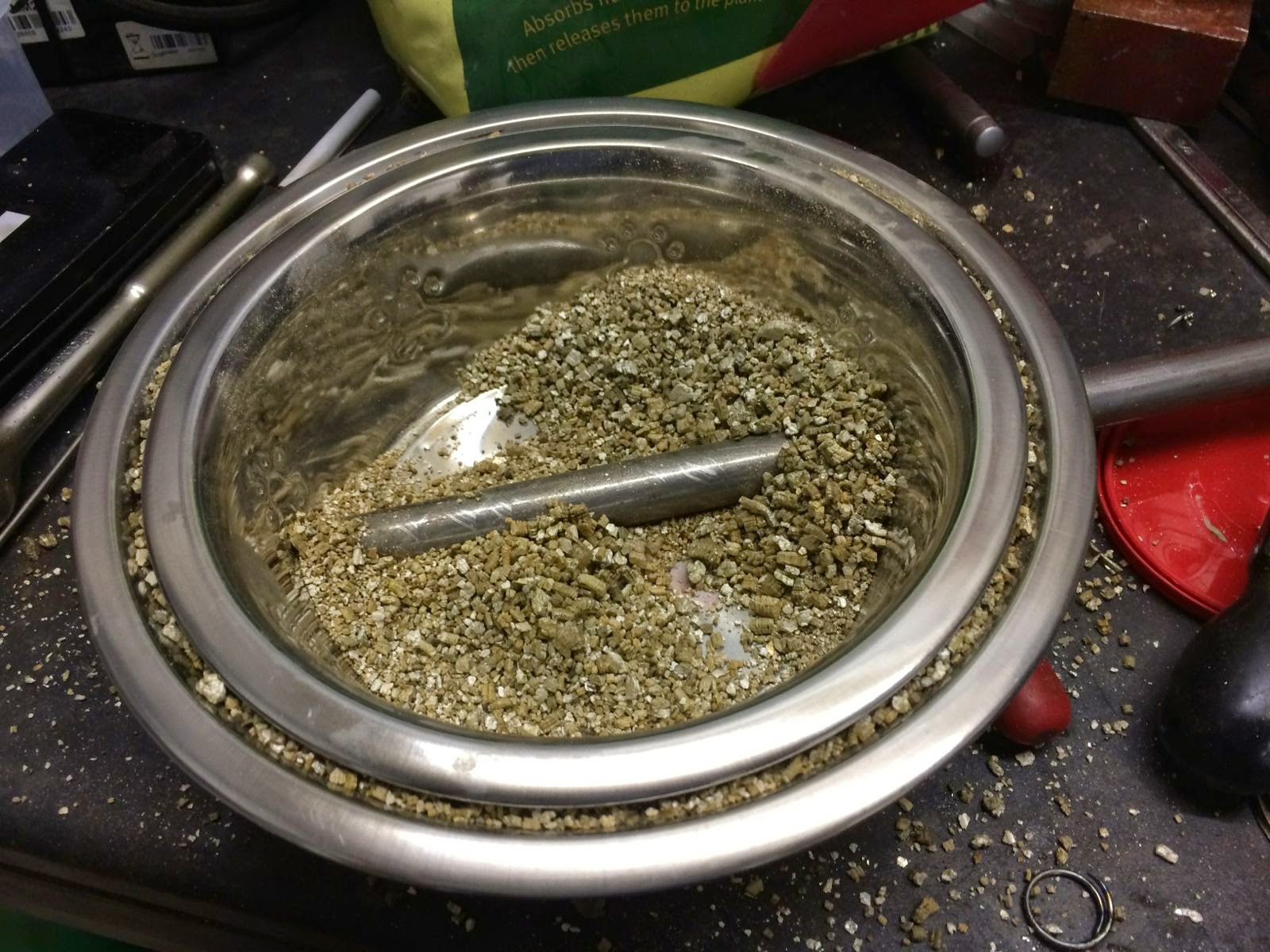 Then sealed the top edge with the remaining fire cement. I drilled 4 x 6mm holes to let the air out.
I welded on three little legs to keep it off of the workbench, but that would not be necessary if you were working on a heat-proof surface. 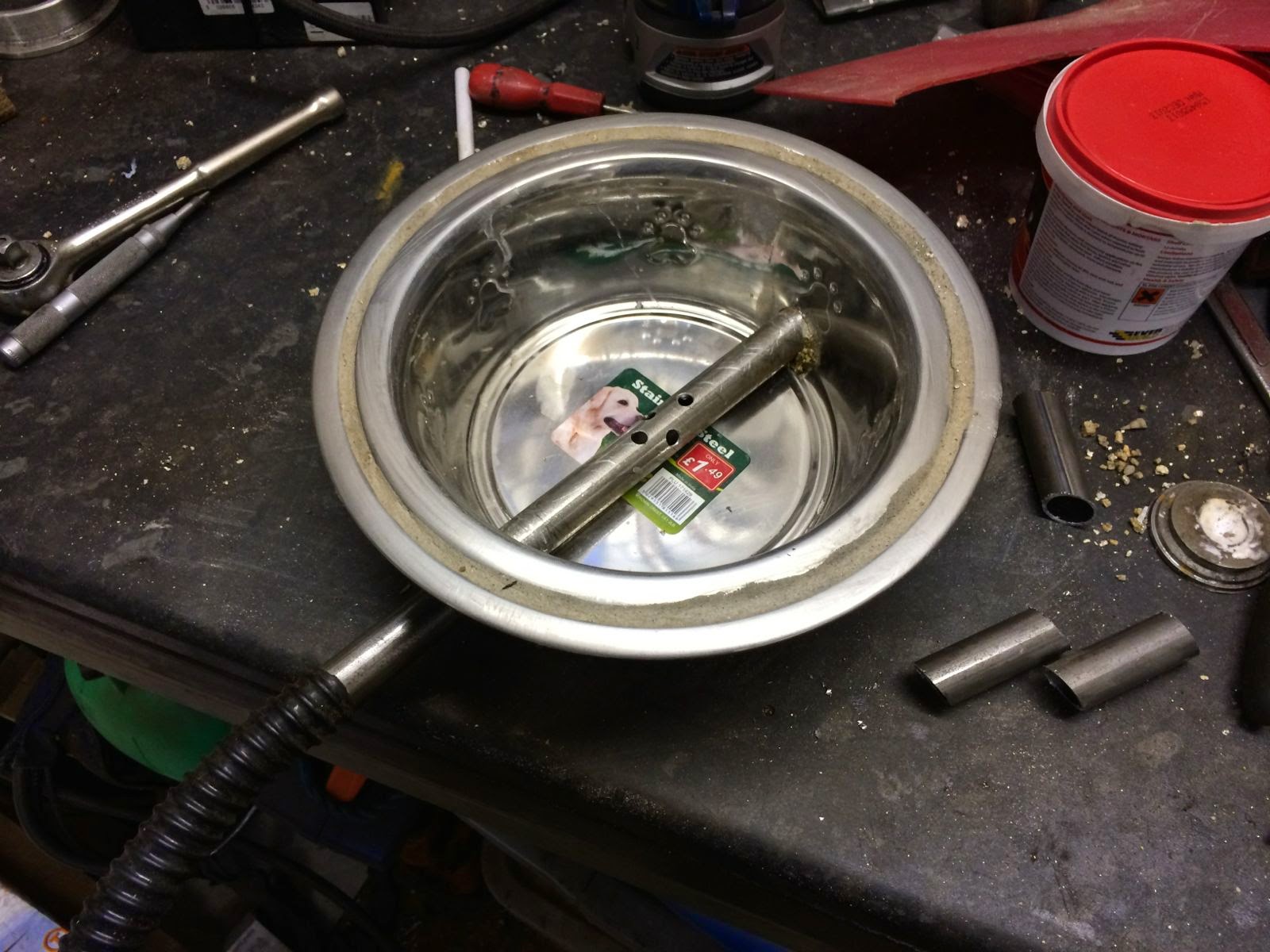 I then filled it with self-lighting barbecue charcoal, and lit it with a blowtorch. The charcoal I got was meant to be ignited in the bag, but I didn't wan't such a big fire. 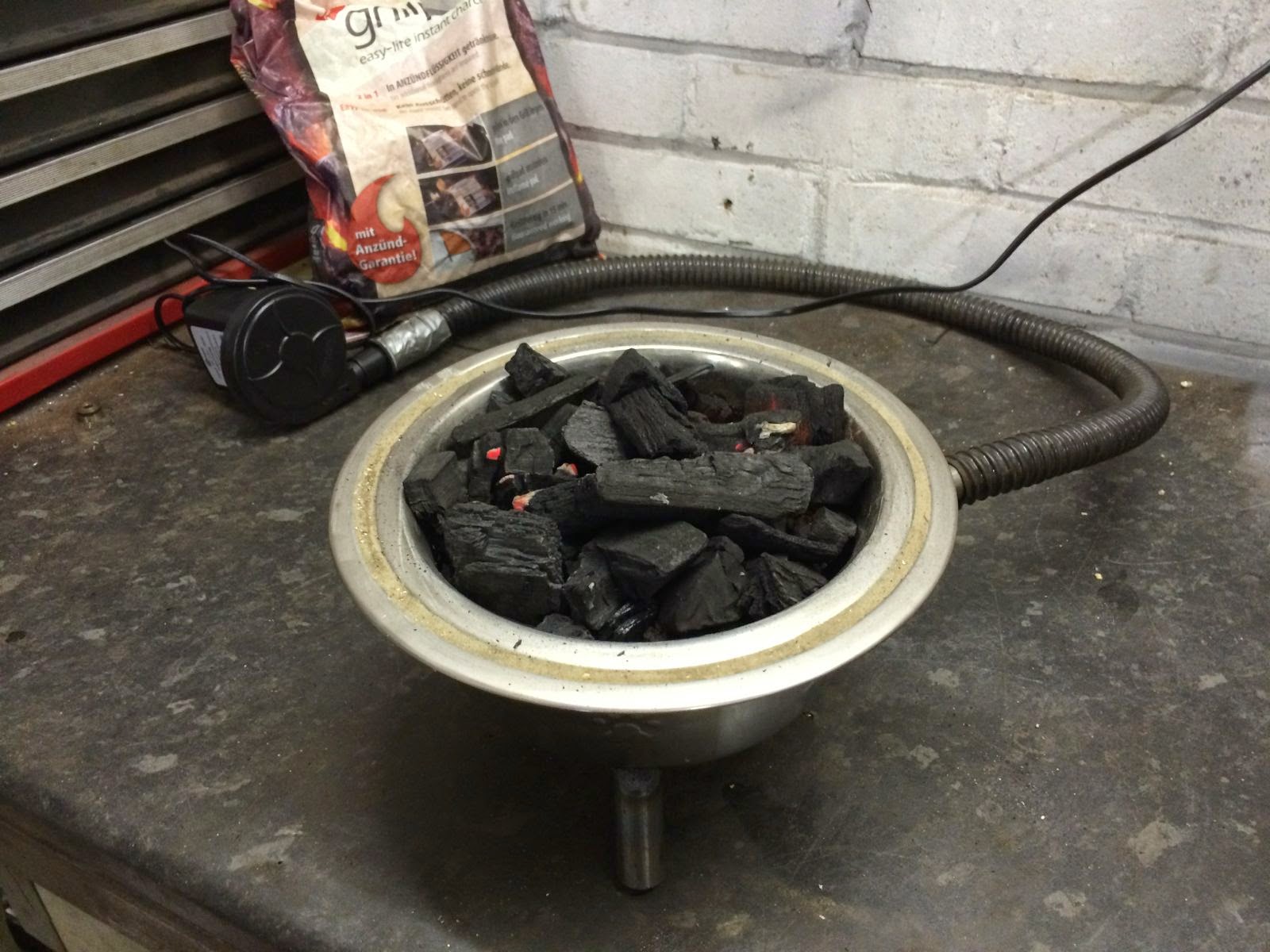 With the blower on, it got properly hot. It also made quite a lot of sparks. I don't really think it was a good idea to do this in my garage, but it was a bit late by the time I realised this. I also needed the vice close to hand, so didn't have all that much choice about where the fire was lit. 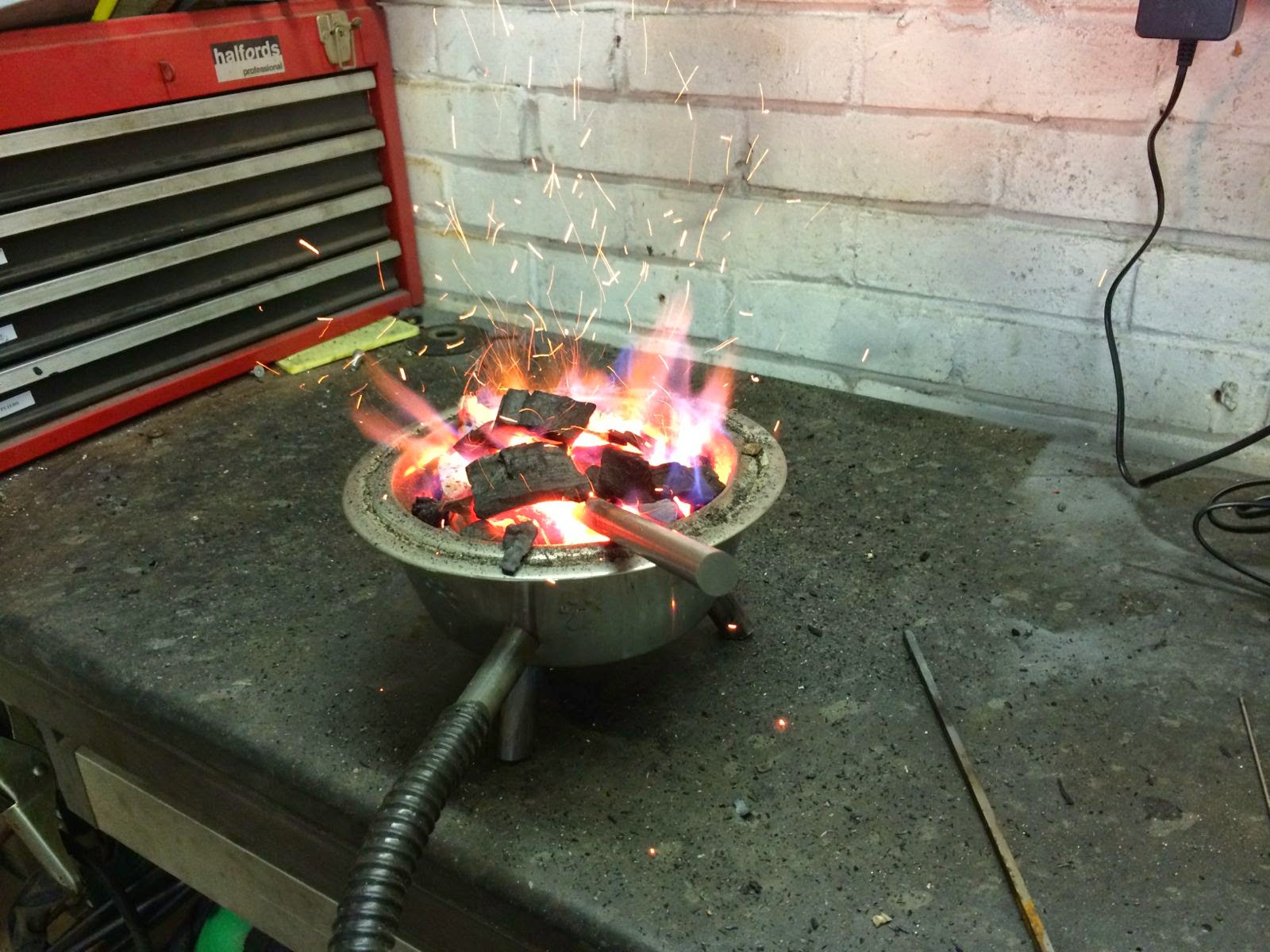 And here is what I made. The ball and stem were machined on my lathe, the forge was only for making the two bends.
Yes, it is actually exactly what it looks like. But not for a real one. 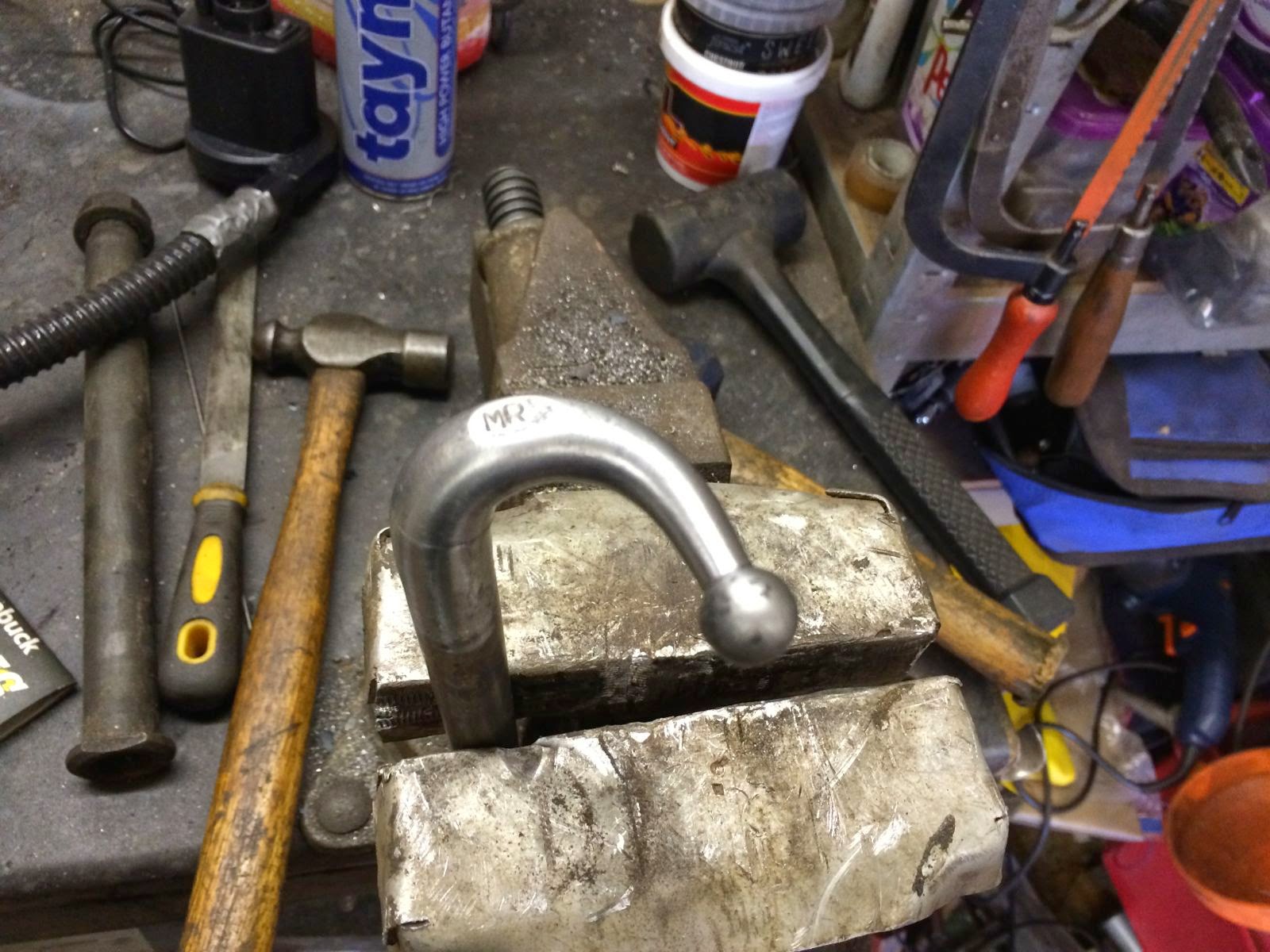