Much to my chagrin, the Ner-a-Car has not actually run since I took it on a trip to France. I have occasionally had an idea, tried it (replacing the capacitor with a modern one, for example) failed to make the bike run, and given up.
With a vintage vehicle day at work, and the Banbury Run looming in the near future I decided it was time to consider the bike again.
The spark seems very weak, and it wasn't all that weak before, so I wondered if perhaps the magnets had lost their magnetism. There isn't really much reason for them to, and I had them re-magnetised during the rebuild, but I speculated that perhaps the bike had been parked for a long time without the magneto armature being in the right place to act as a keeper. (it's a 2-stroke single, there are not many things that are capable of stopping it working).

Lots of people have build magneto chargers before, but nearly always for the usual horseshoe-shaped magnets that are found round the outside of the typical unit magnetos. The Ner-a-Car has the magneto magnets as part of the flywheel, which apart from anything else means that the magnetiser needs a bigger than normal span.
Initially I was planning to make a magnetiser almost exactly the same shape as the magneto armature, but after thinking it through I decided that a conventional layout would work, and would be adaptable for other types.

It seems to be agreed that you need 20,000 Ampere-turns to remagnetise a magneto. I did some calculations in Excel during my lunch-hour. I attempted to optimise for the minimum mass of wire.
I figured out some numbers and bought 1kg of 1mm wire and then waited for it to arrive. I then realised that I had made an error in my calculations, and had been under-estimating resistance by a factor of 10. This meant that my 20A 240V coil would actually be a 200A coil, and that seemed like a bad idea.
So, I had a bit of a re-think and decided that I would use 2 x 12V coils in parallel. These would take 60A, but anyone with a vehicle that doesn't rely on a magneto and generator has a suitable supply in the form of the battery.

So, I ordered 1kg of 1.4 mm (diameter) wire.
The coil formers are 25.4mm mild steel bars, machined to a length of 86.5mm with 5mm plastic end-caps pressed on. The windings are 7 layers of wire @ 50 turns per layer for a total of 350 turns per coil. 30A through each coil is 21,000 Ampere-Turns.
The coils are linked and mounted by a mild-steel bar, 35 x 20mm. I made some top pieces out of the remainder and the thing is assembled with M8 screws.

When I wound the magneto itself there were 20,000 turns to wind, and I did it on the lathe under power. However this wire was a lot stiffer, and was going to need more attention to persuade it to lie straight, so I mounted the bars on a threaded stub in the chuck of my Rivett lathe, and mounted a winding handle on the other end. Then I wound the coils by hand with the lathe drive disconnected.

The wire terminates at 1/4" copper tags fitted into slots machined in the end-caps and secured by an M2 countersunk screw. One end of the wire was filed clean of varnish and tinned, then soldered to the tag. Then the assembly was carried down to the lathe, mounted and wound. At the end of layer 7 the wire was cut, tinned and soldered to the other terminal tag.

Once assembled I used a small current-limited PSU to identify the N and S poles, using a device that I got from eBay.  testing with my magneto (which has a clearly stamped "N" on one pole I was able to determine that with my pole finder the red end points to N.

Something that hadn't been 100% clear to me prior to building this device is that when magnetising a magneto the N of the magneto magnet sits on the S of the charger. (which I think is somewhat the reverse of the situation with a battery charger) 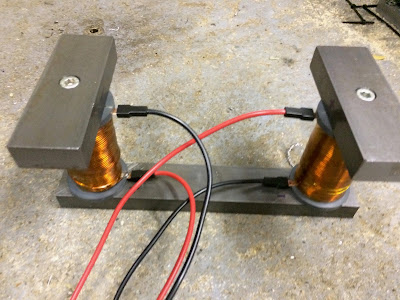 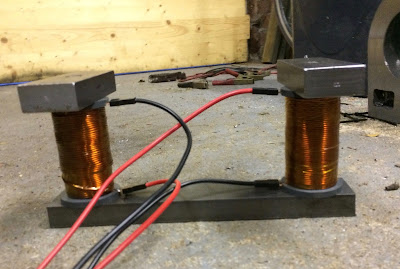 The magneto is simply placed on top of the charger and the other ends of the wires held against the battery terminals for a few seconds. The coils became warm but not hot in that time-scale. 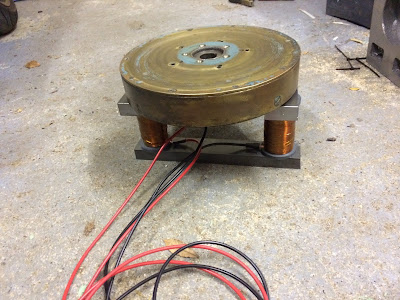 Did it work? I am not 100% sure. But I did get to ride the bike round the block early this afternoon.