The Ner-a-Car that I am rebuilding has a riveted-together chassis. I have removed all the rivets in order to perform repairs, and now I am faced with the job of reassembling with 100+ rivets.
I am reasonably prepared to hand-pein the rivets, but there is a problem with that approach, as many of the rivets have no access to the back for the dolly. Furthermore I am not at all sure how I would suspend the chassis in the right place to hold everything correctly.
I had considered making a floor-standing dolly and suspending the chassis from adjustable straps in the roof, but that still doesn't avoid the access problem (unless I was to make a very special-shaped dolly.

Having looked on the internet for ideas I saw that air hammers are sometimes used for home-build aircraft assembly, but having bought a very cheap air hammer (£12) from Screwfix I found that such a device isn't really up to the job of installing 3/16" steel rivets.

I found a number of pneumatic and manual squeezers for sale in the US, but for large amounts of cash, and they are only rated for 3/16" in aluminium and (sometimes) 1/8" in steel.

I then tried a different search and found lots of designs of hydraulic cable crimpers on eBay. They come in closed-anvil and C-anvil styles. I eventually settled on a closed-anvil style one, rated at 12 tons,  taking a gamble that the end would unscrew from the cylinder. At £40 it didn't seem like a huge gamble, I am sure I can find some cables to crimp.

It arrived and, much to my relief, the end does indeed unscrew. A quick test squashing a rivet in the smallest hex-die indicated that it was easily capable of the job, so the next stage in converting it to my will was to change the end to a C-frame to reach around the chassis.

I had a spare kitchen cutting mat lying about (part of a fish/veg/meat set, but I don't use meat, or fish), and by cutting that to shape I was able to develop a C-frame design that would access all the rivets on the chassis. I was going to mill this from some 20mm mild steel, but I didn't have anything suitable, and a lump from a supplier would cost a fair bit, so it was easier for me to have the shape I needed cut out by a local laser cutting company, albeit at not a lot less than the crimper cost. 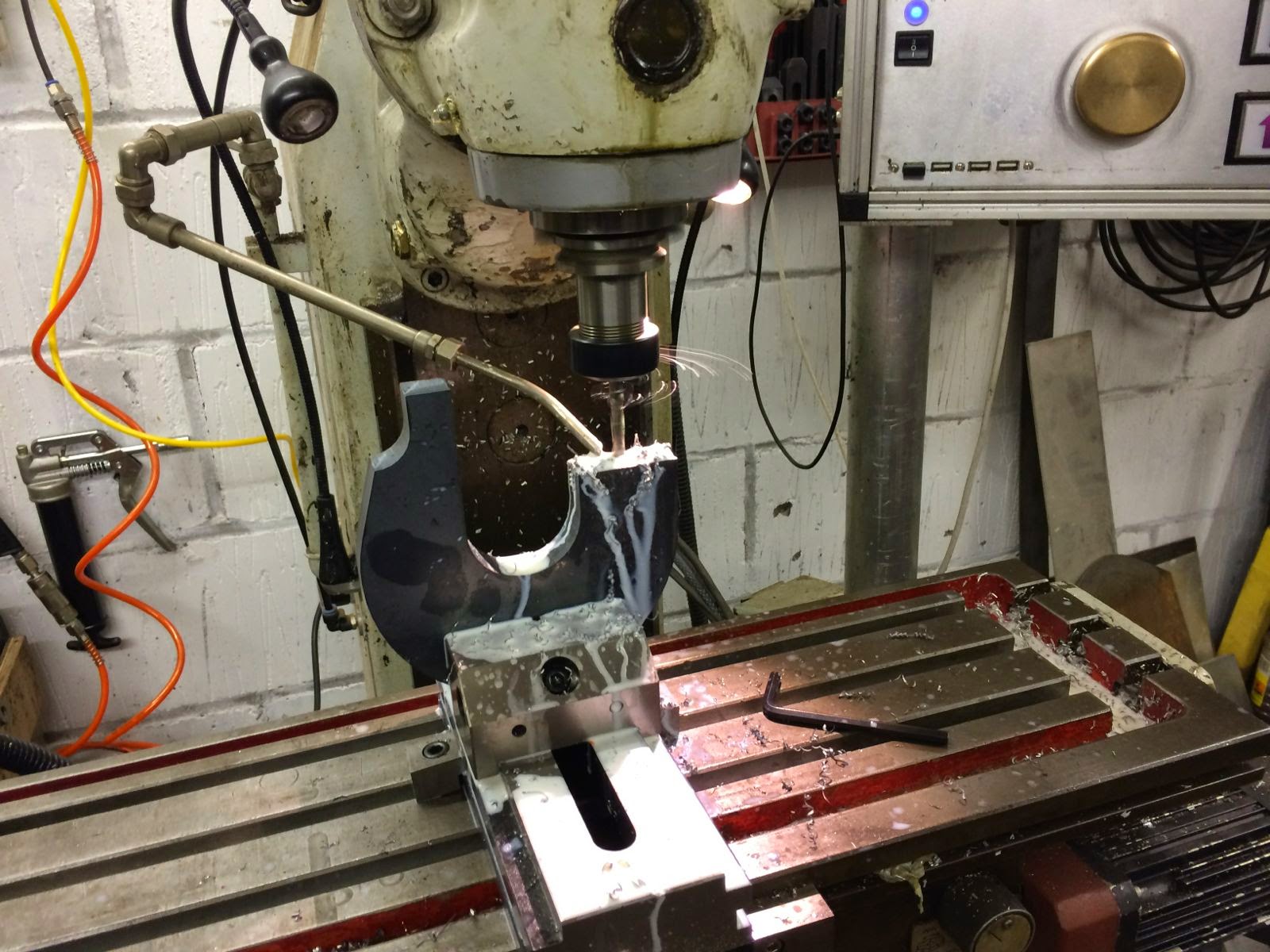 The picture above shows it looking rather like a home-made micrometer, being machined for the mounting bolts.

I made a screw-on adapter copied from the original crimper head, and bolted that to the C-frame: 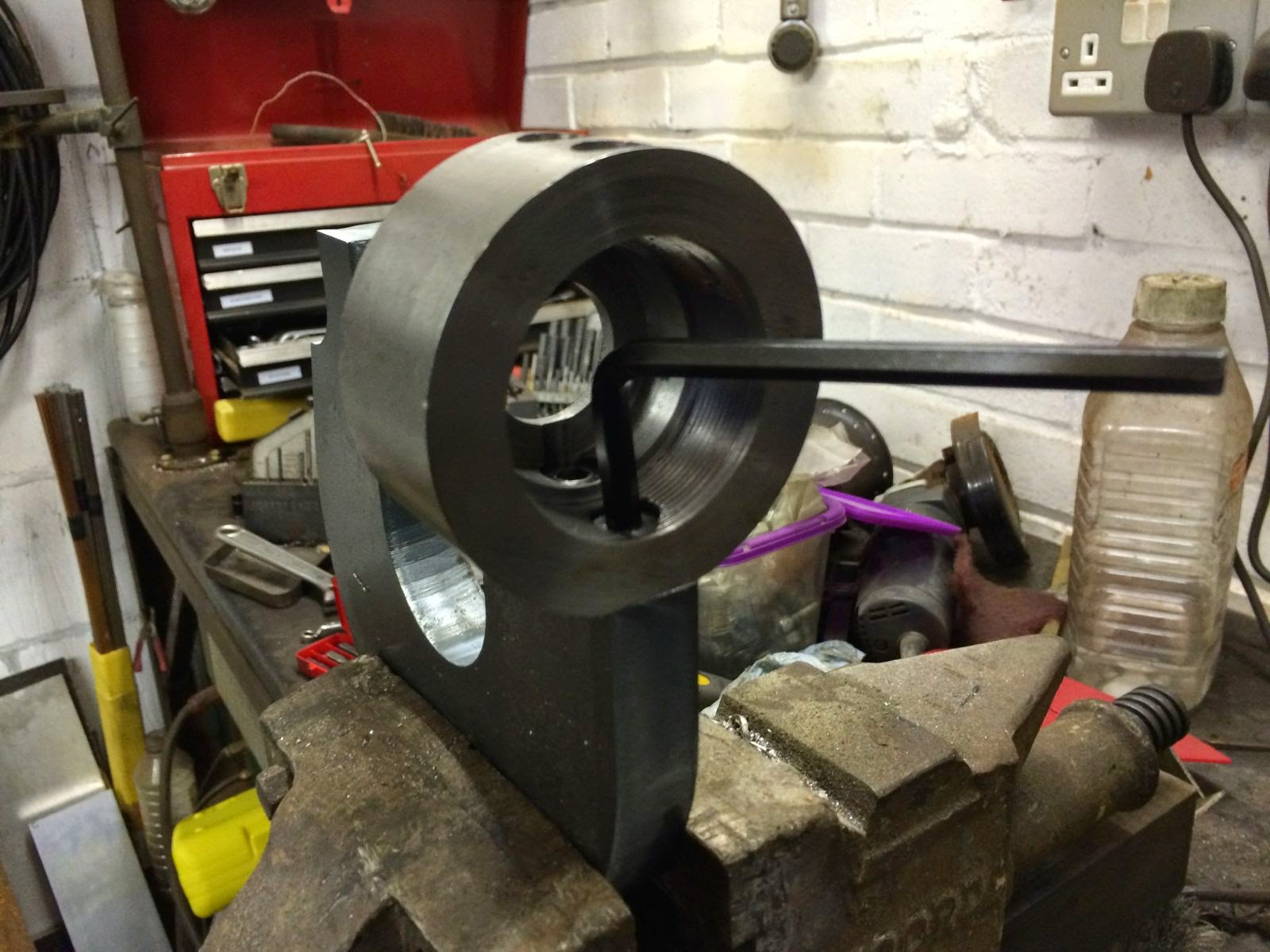 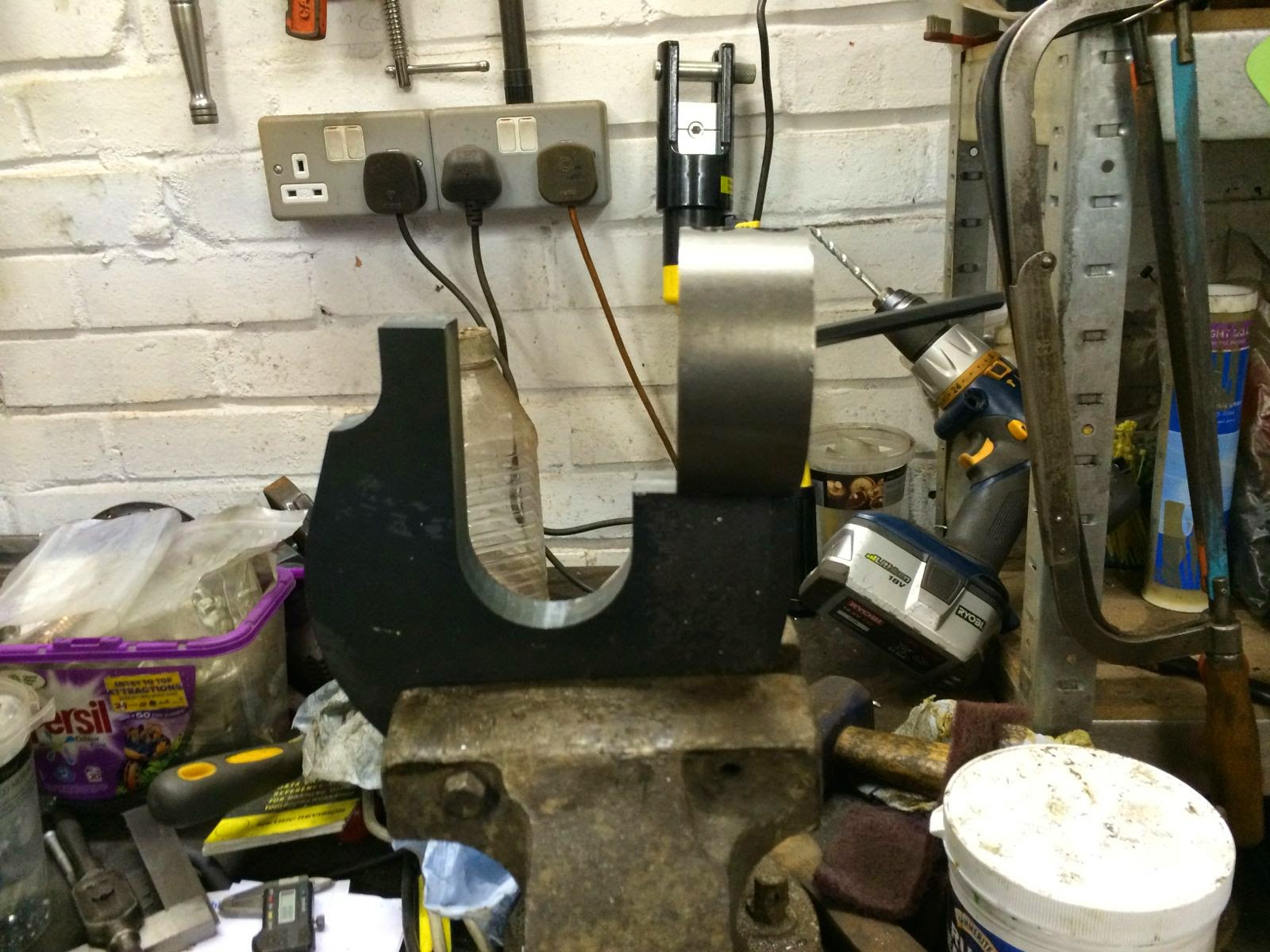 And the whole thing assembled, it almost looks like it was meant to be: 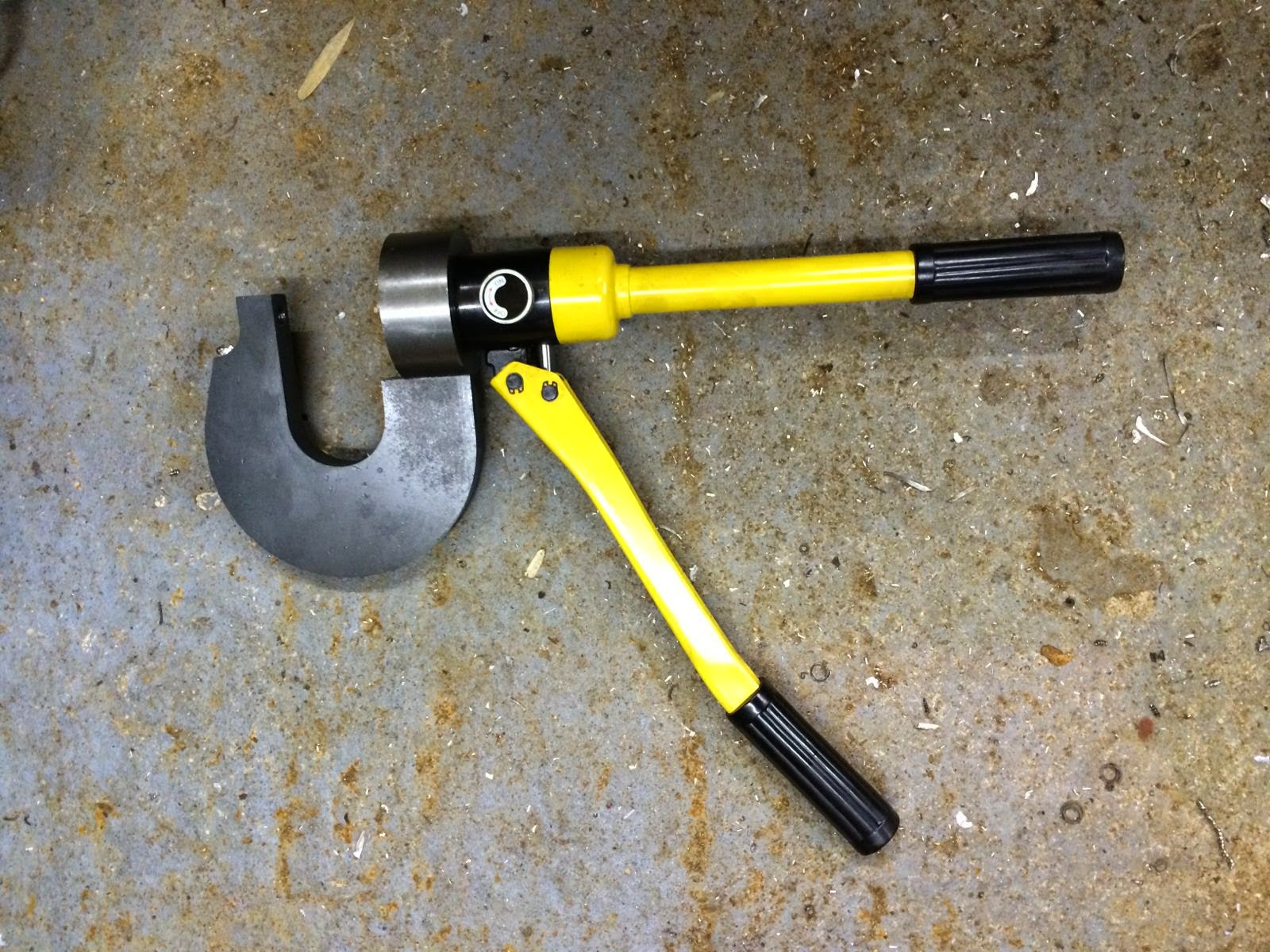 I was worried that the hydraulic plunger might be hard, but it seemed unlikely at the price, and it turned out not to be even slightly difficult to drill and tap it to take the rivetting anvils.
The anvils are made from 12mm silver-steel, threaded for adjustment and with a rivet cavity made with a ball-end milling cutter in the lathe.

Here we see it in action on a test piece: 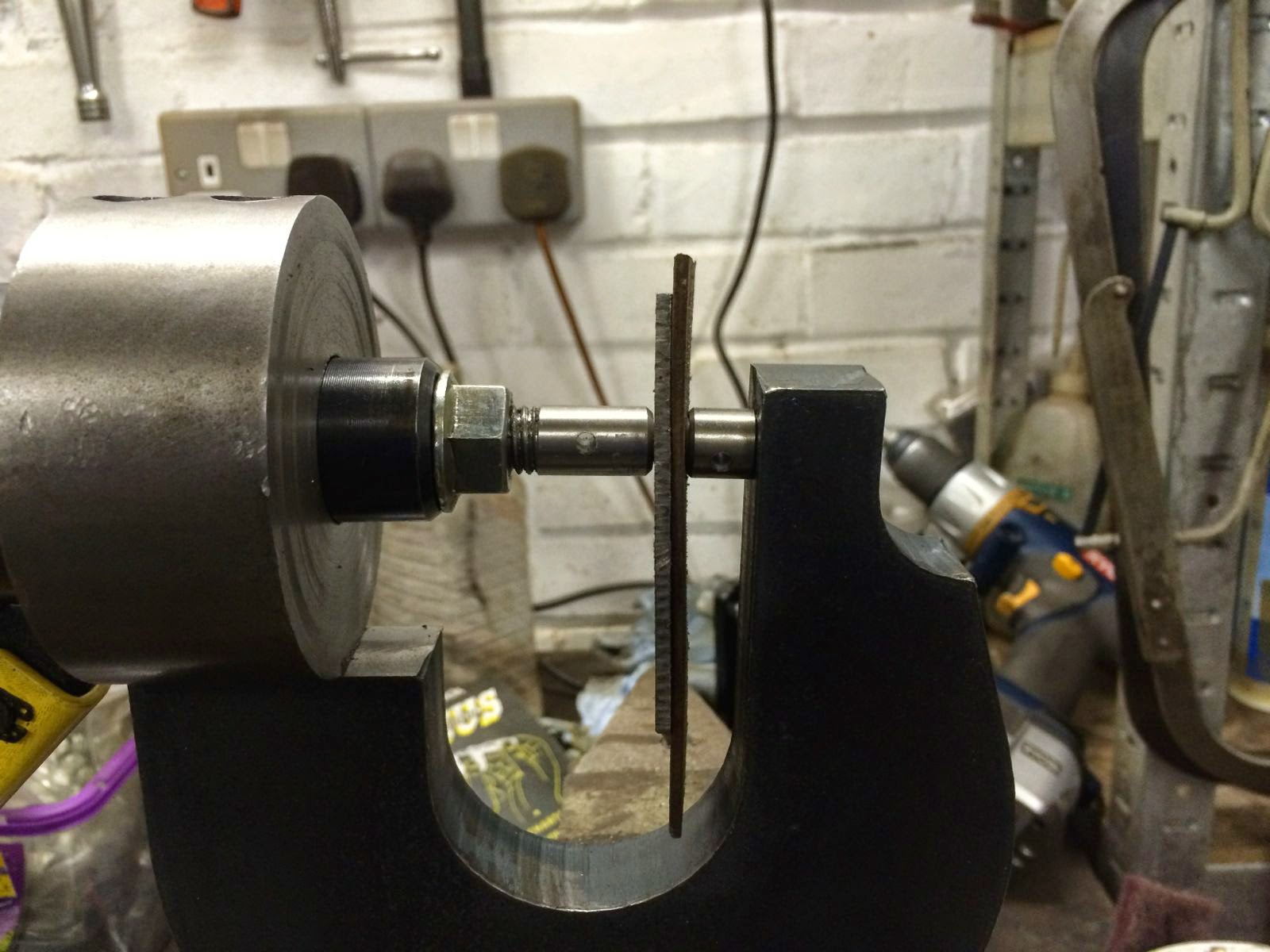 And the finished rivets: 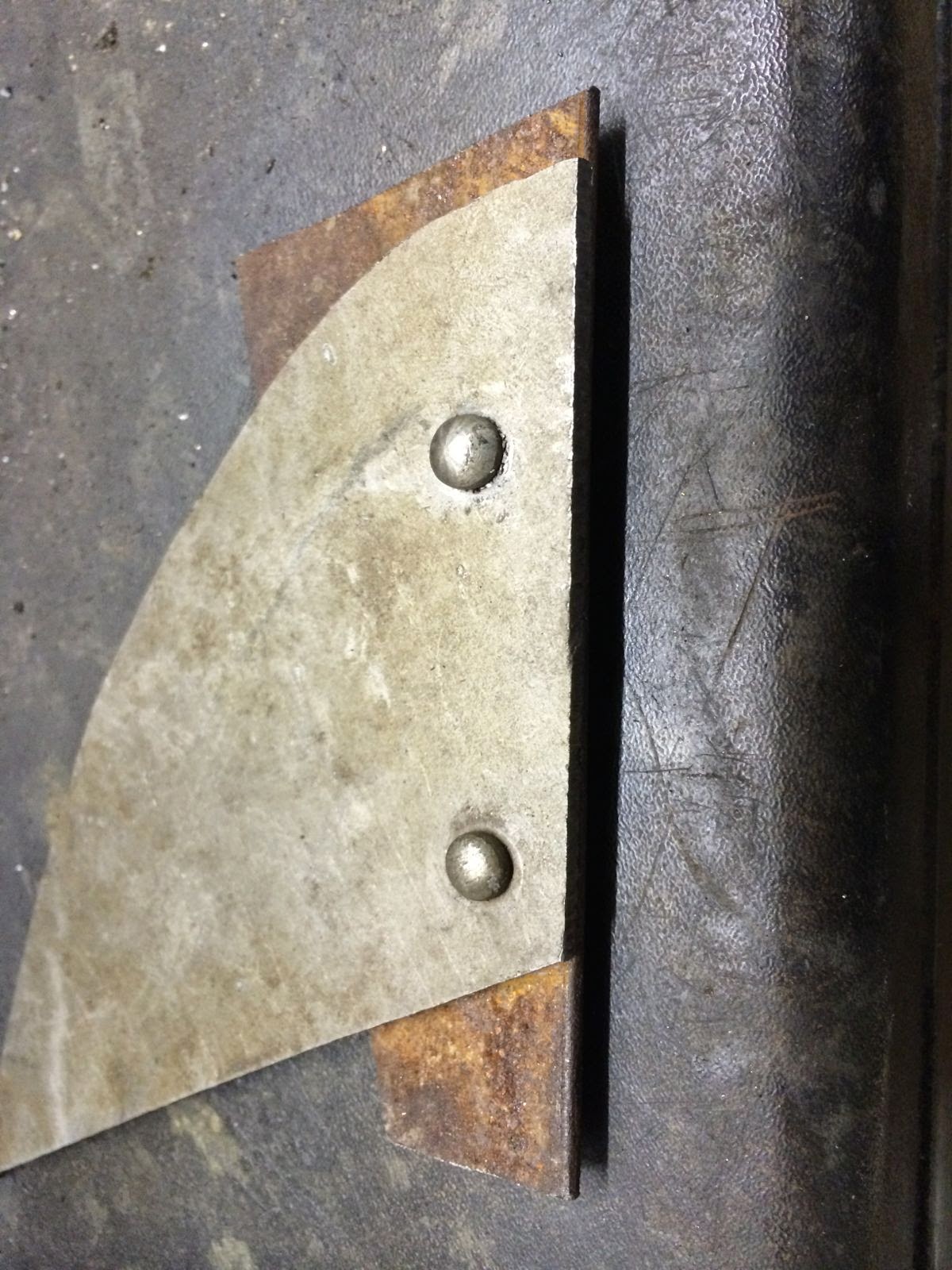 I was hoping for a more complete head, but these actually did have the dies fully bottomed out, so perhaps I need to work on the shape of the die cavities a little.

Even if I don't get the heads any better, this will be quite adequate for the job at hand. They are not going to be falling out.

After using the device in anger to install 70+ rivets in the Ner-a-Car chassis, I have learned a few things.
1) I had to weld the collar to the C-frame. The force was far too much for the 2x8mm bolts I used.
2) I used silver-steel for the dies, intending to harden them, but didn't get round to it. I probably should have. Not that there was a lot of wear to them, but the long one got rather bent. Using high-tensile bolts would probably have achieved the same result.
Posted by bodgesoc at 17:18

Email ThisBlogThis!Share to TwitterShare to FacebookShare to Pinterest
Labels: Tools