My Ner-a-Car kit came with three engines, none of them functional. They all have 3-digit numbers making them pretty early. Not that Ner-a-Car ever got beyond 4 digits.

Of the engines the best bet was also the oldest. It was free, and clean, and looked fairly intact. Of the others one was free with a broken crank-case, and the other was very complete, but very seized up.

The best engine was, curiously, mounted in a custom-made stand, and had had the magneto removed. Interestingly the outside of the (brass) flywheel was quite highly polished.

It seemed wise to have a look inside, and when I did that I found two interesting things.
Firstly (and not shown in the photo) an aluminium base-gasket had been fitted that deliberately blocked the transfer port, and (more annoyingly) the piston was rather broken.

My conclusion is that someone tried to use the engine as a compressor, hence the stand, the flywheel being polished from use as a pulley, the blocked transfer port and (I later found) more than the expected amount of oil in the crankcase. I can't imagine it worked even a little unless he had some valves too, which I could see no evidence for. 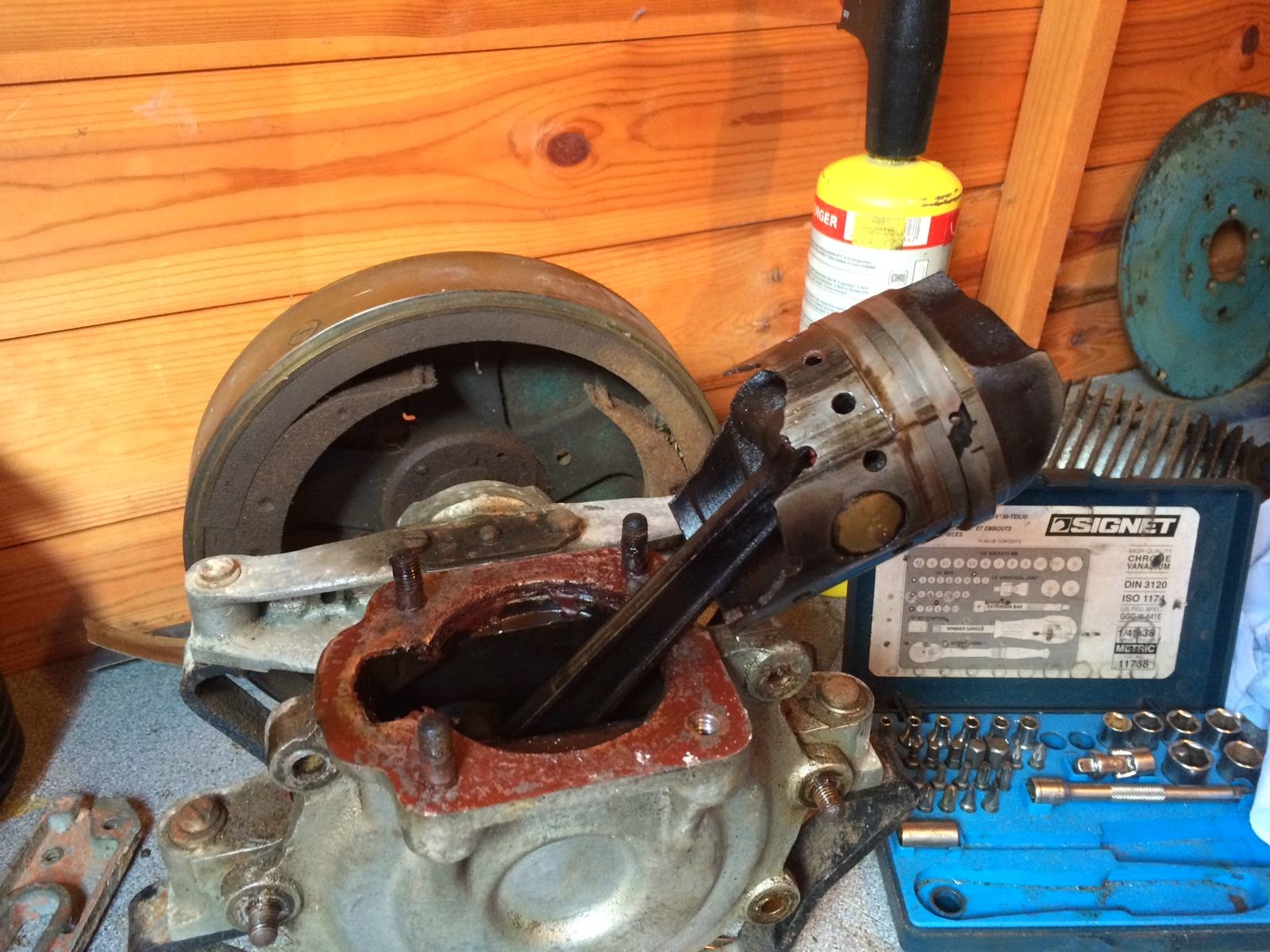 So, on to Engine 2. This one has a broken crank-case, but was free. Unfortunately it also had a broken ring and a missing ring-location pin. 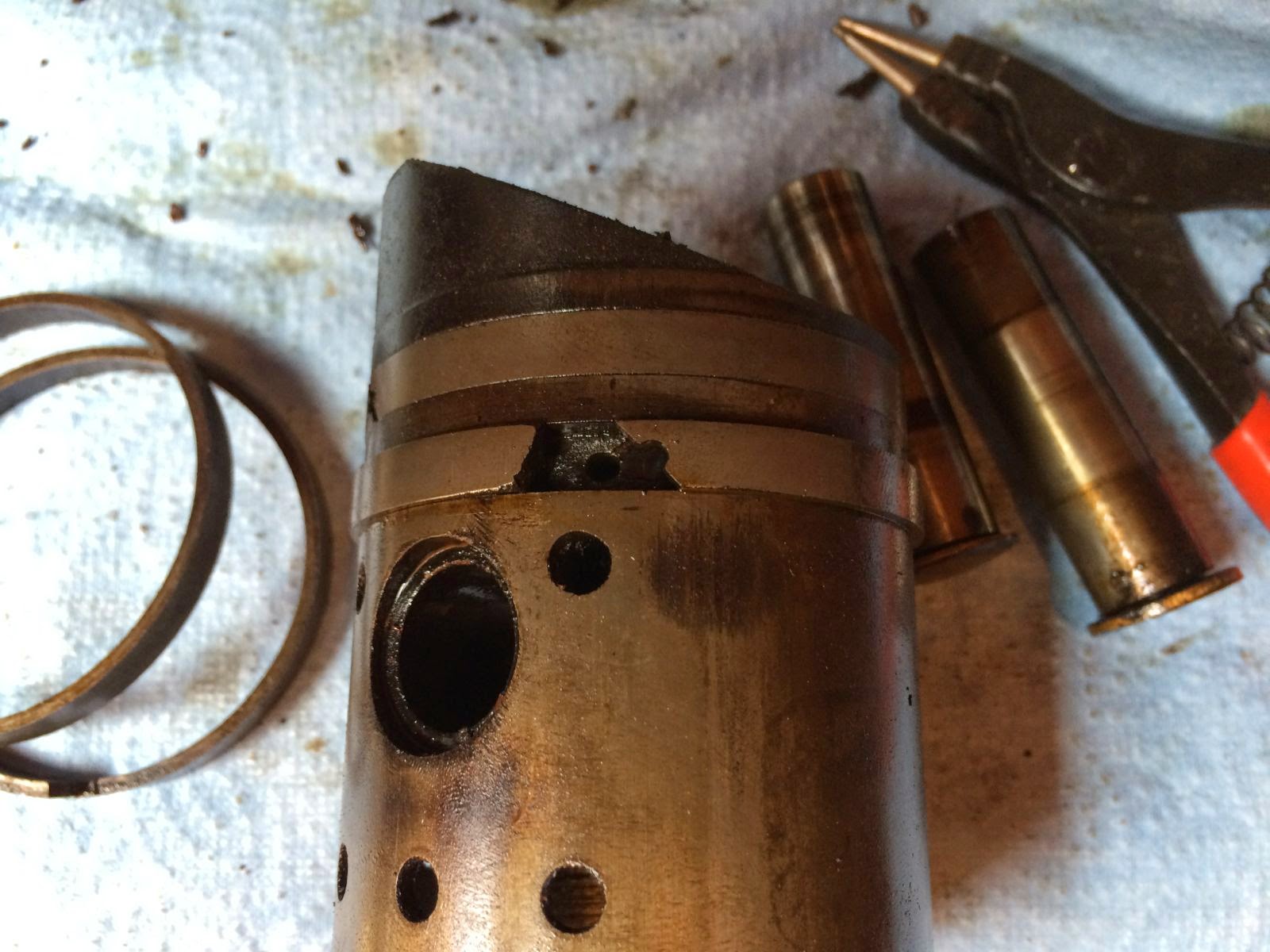 The broken ring wasn't a huge problem, it seemed unlikely that the other piston would be needing the ones it had ever again. And it wasn't a big job to make some new location pins. (the one that was still there was loose) 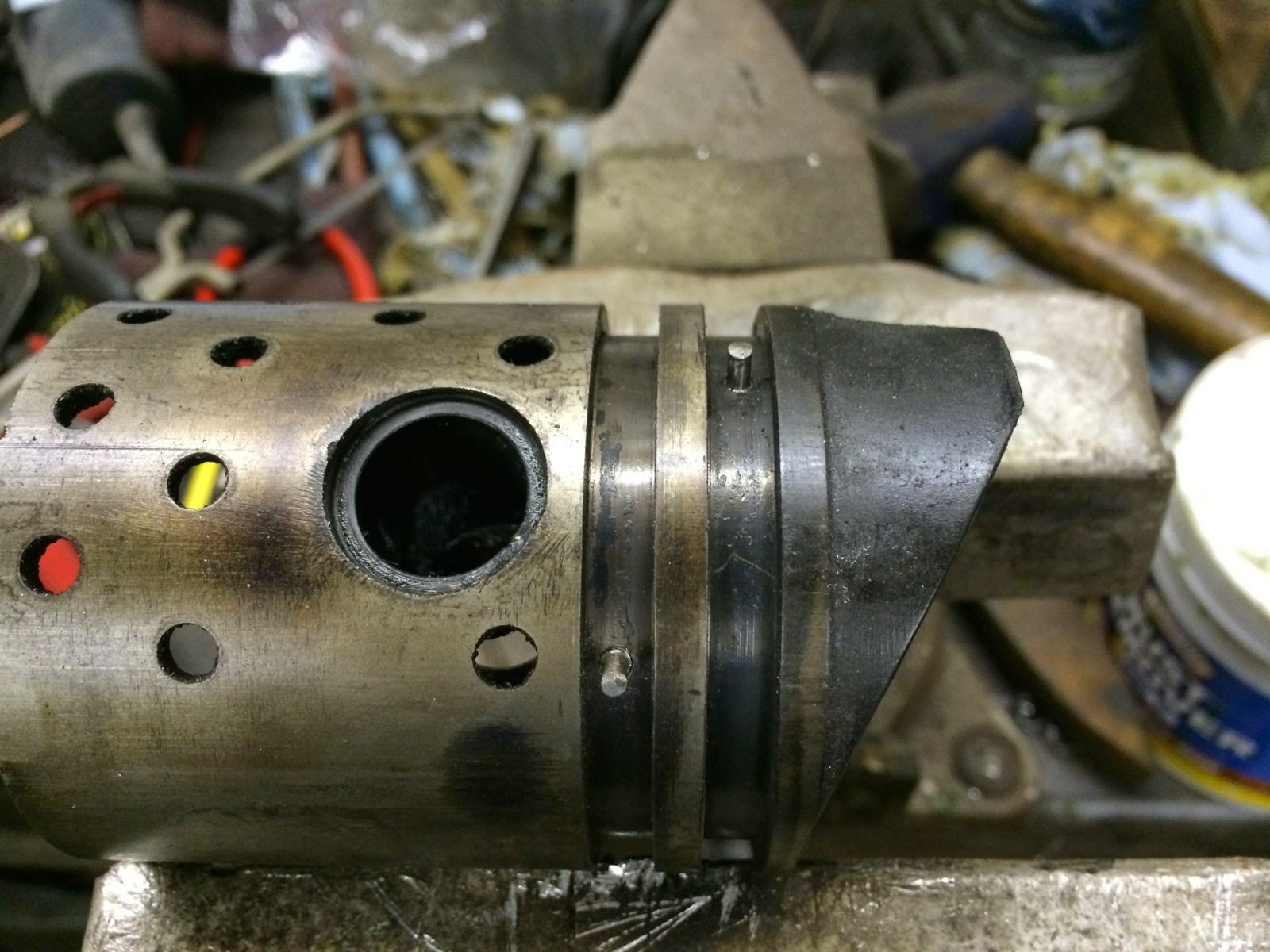 Unfortunately the broken and not-located rings had rather badly scored the bore of that cylinder, so some degree of mix-and-match seems inevitable. I probably need to measure some stuff to see if the piston fit is anything like usable.

Of course there is always the other engine, but that is so far remaining resolutely very stuck, despite heat, soaking with lubricants, and being clamped to a mill table for purposes of heaving on stuff: 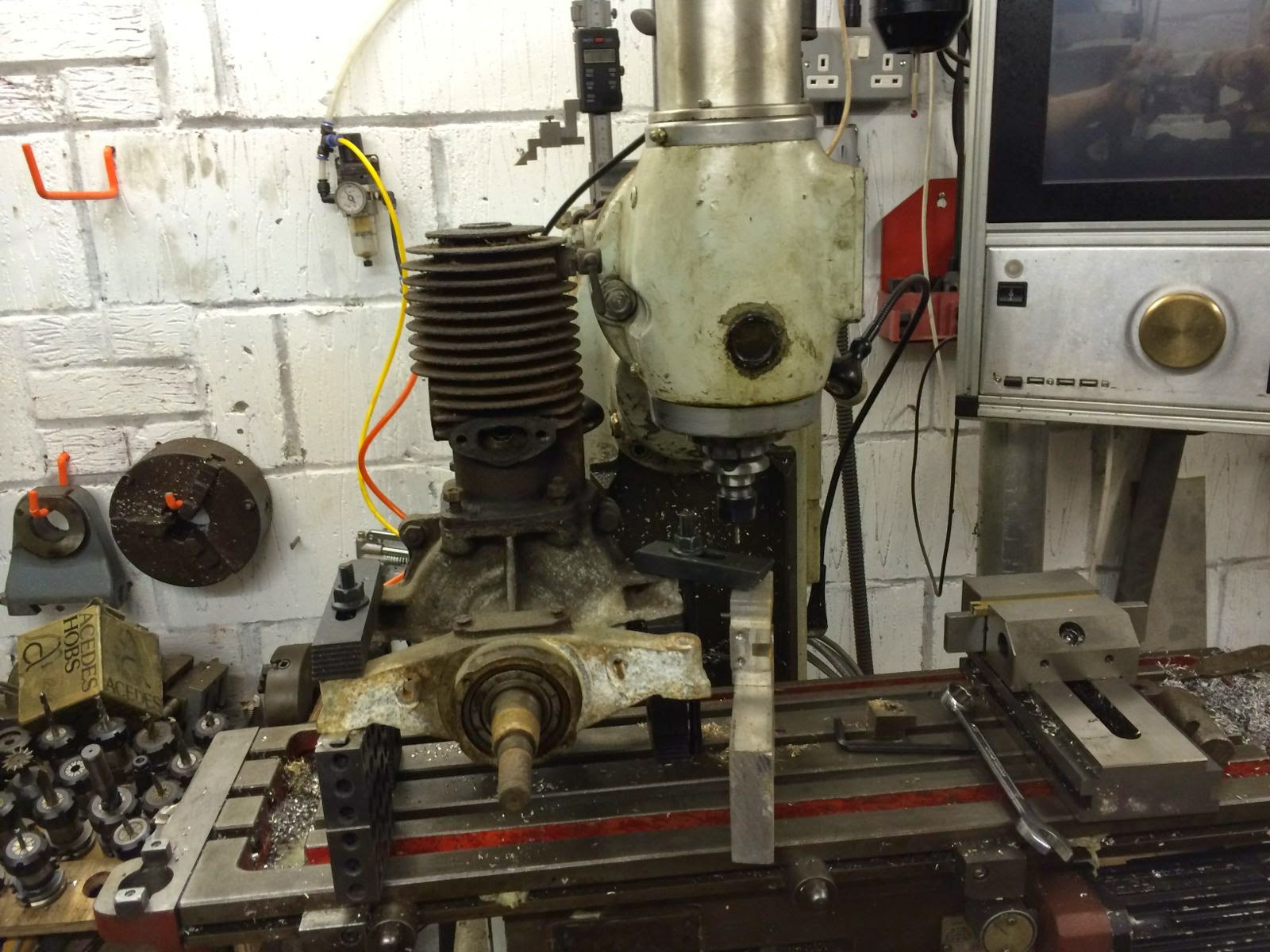 The design of the engine means that the piston, rod and cylinder can be removed as a unit, and I think that will be the next thing to try. Perhaps hydraulic pressure into the cylinder might be worth a try too. Ideas welcome.

Having decided that I probably had a cylinder and piston, and that the crank was OK, the only missing parts of the 2-stroke cycle are a spark and some fuel. I decided to look at sparks first.
The Ner-a-Car has a flywheel magneto, which also has a 4V AC coil for lighting.  Fortuitously the siezed engine had a complete, intact mageneto, and the broken engine had a set of points (it looks a lot like it had been converted to coil ignition). Getting to the magnetos to do the swaps wasn't especially easy, I had to make a puller as the flywheel has 5-fold symmetry and you need to pull on the 5 x 2BA bolts. 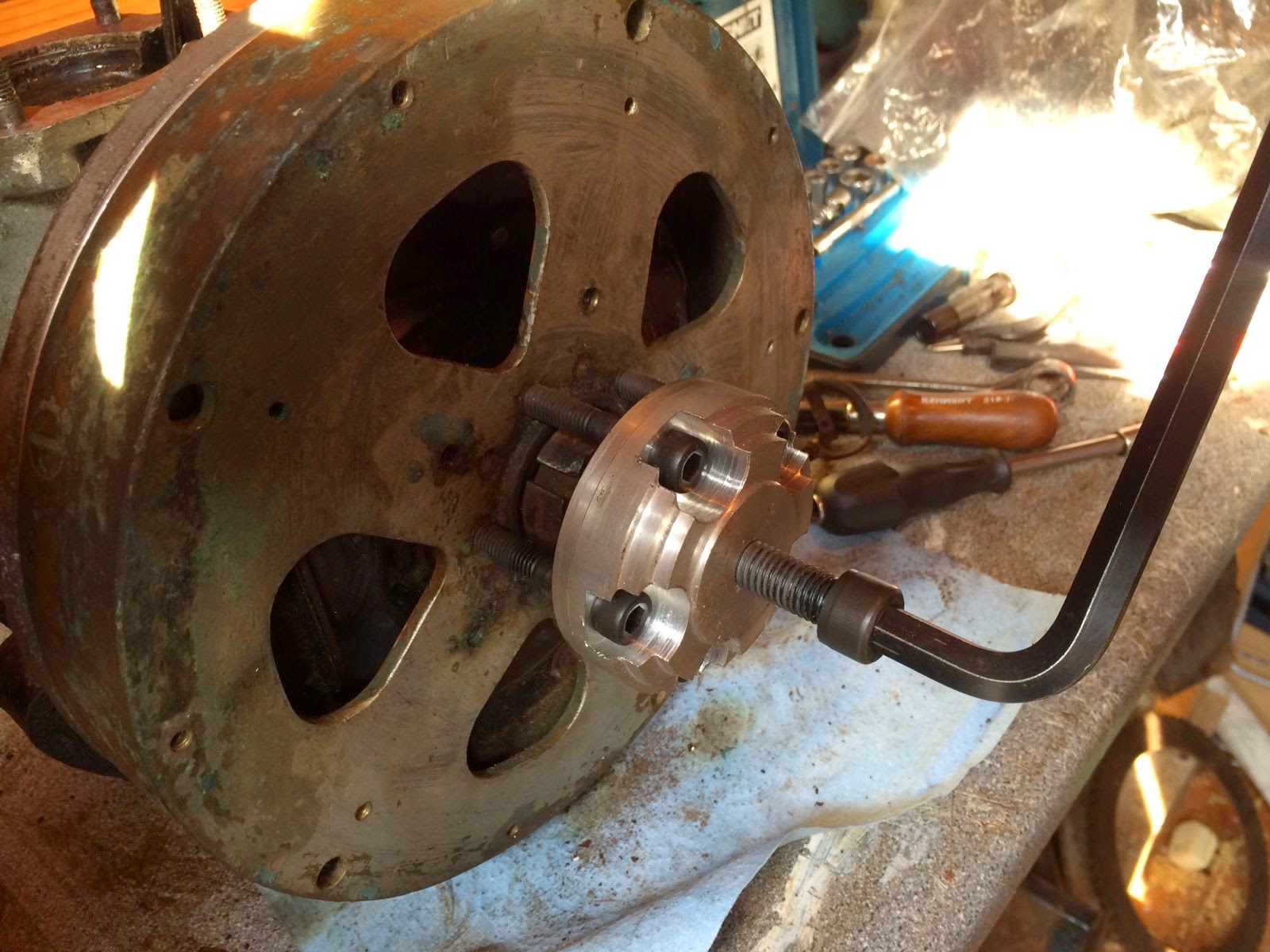 The observant will note that the allen screws look bigger than 2BA. And in fact they are M8, but I machined down the end 1/2" to 2BA. They just happened to be long enough and available.

I don't have many pictures of the magneto, but it does have a very interesting condenser: 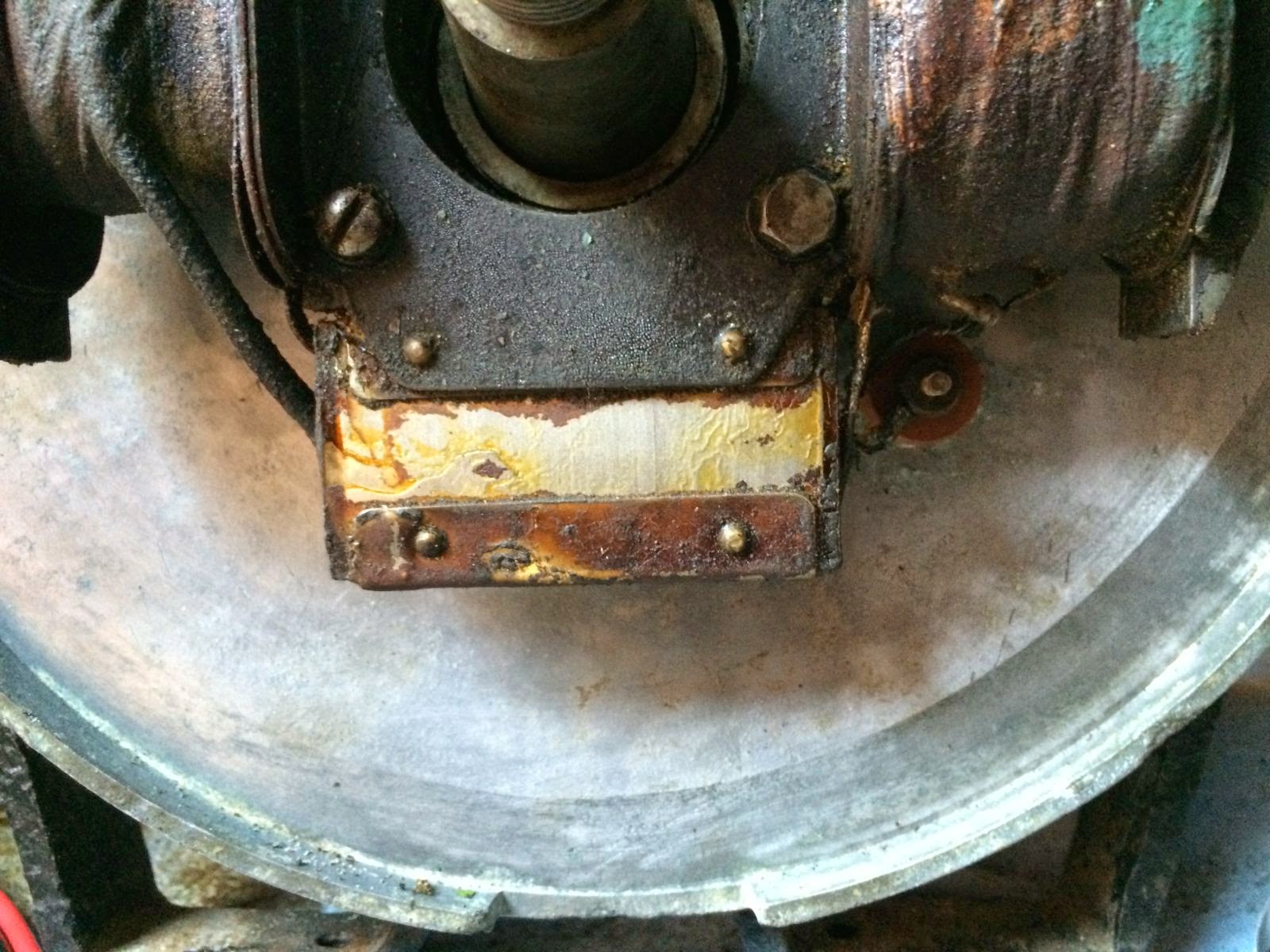 What it doesn't seem to have is any sparky-nature. There is no continuity in the secondary, so it looks like I will be learning how to rewind magnetos soon too.

By this time the hydraulic cable crimper that I bought from eBay had arrived, and converted into a rivet squeezer. This is the subject of another blog entry.

It didn't take very long at all to reassemble the chassis. Partly by taking the chassis to the rivetter: 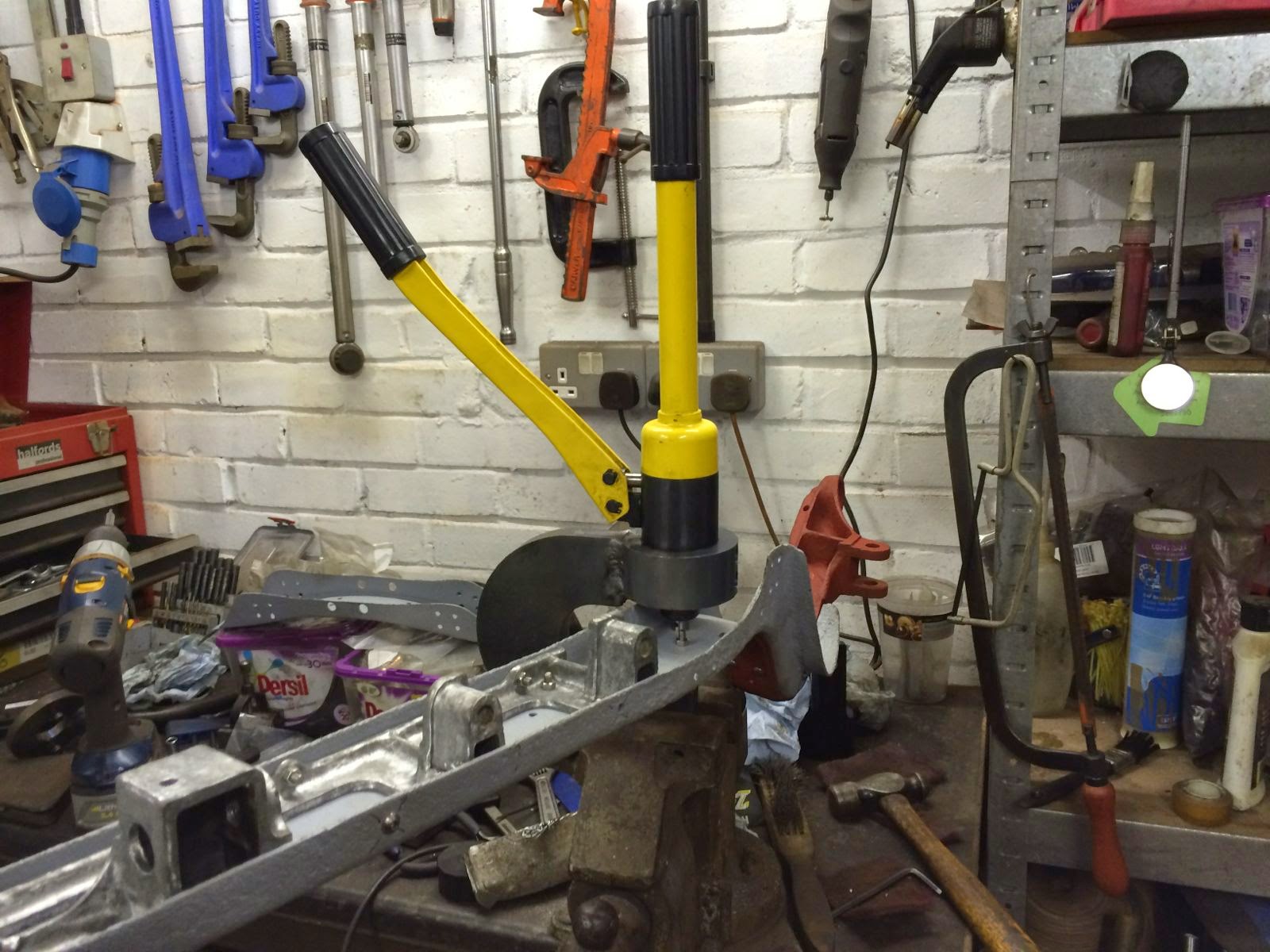 And partly by taking the rivetter to the chassis: 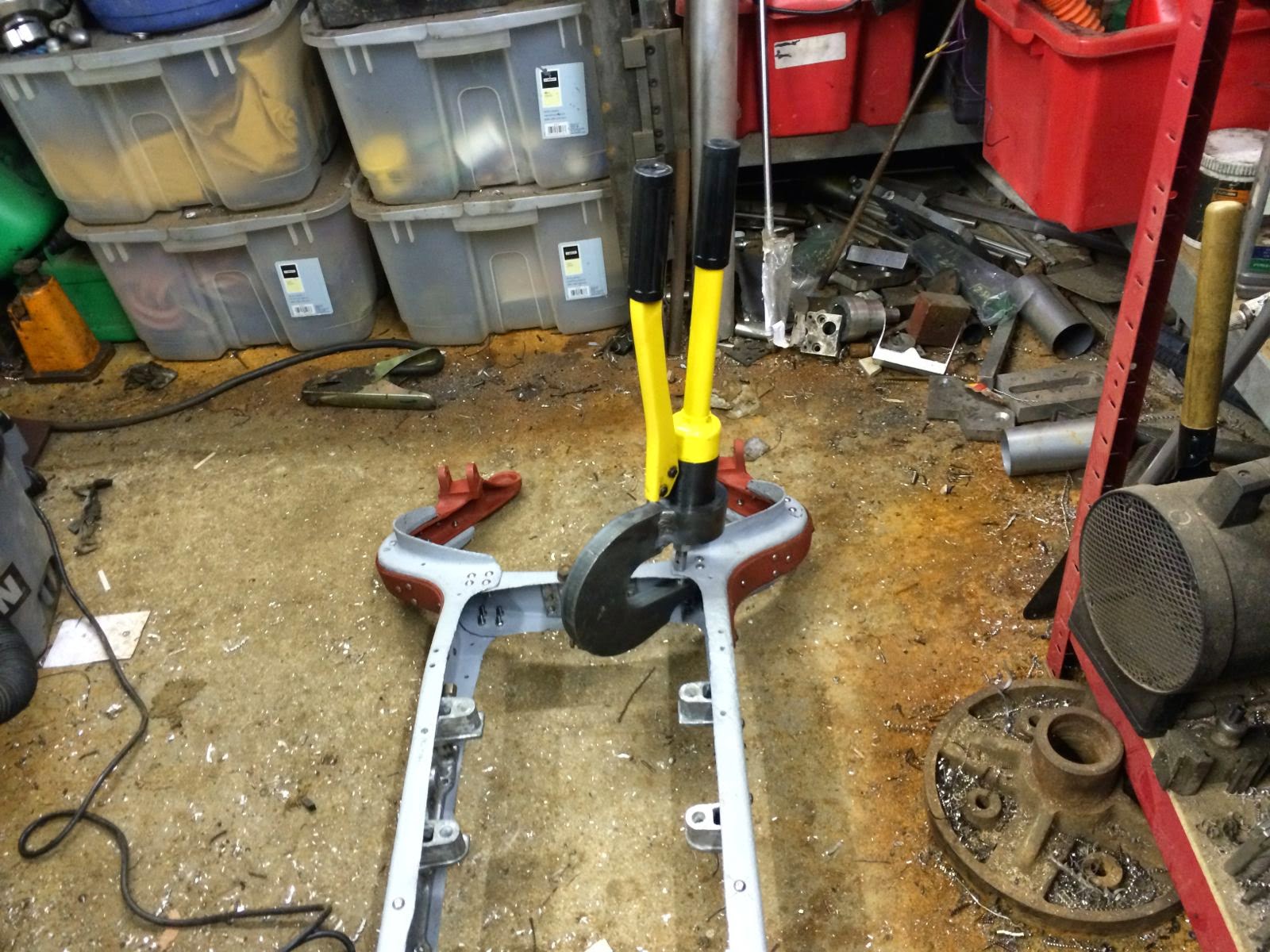 I had read on the internet that the correct length of stem to leave for heading is 1.6 diameters. The Ner-a-Car drawings call out lots of lengths, in 16ths. But now it seems that you have to buy either 1/2" or 1". I made a little 1.6 x diameter gauge for marking the rivets at the right length: 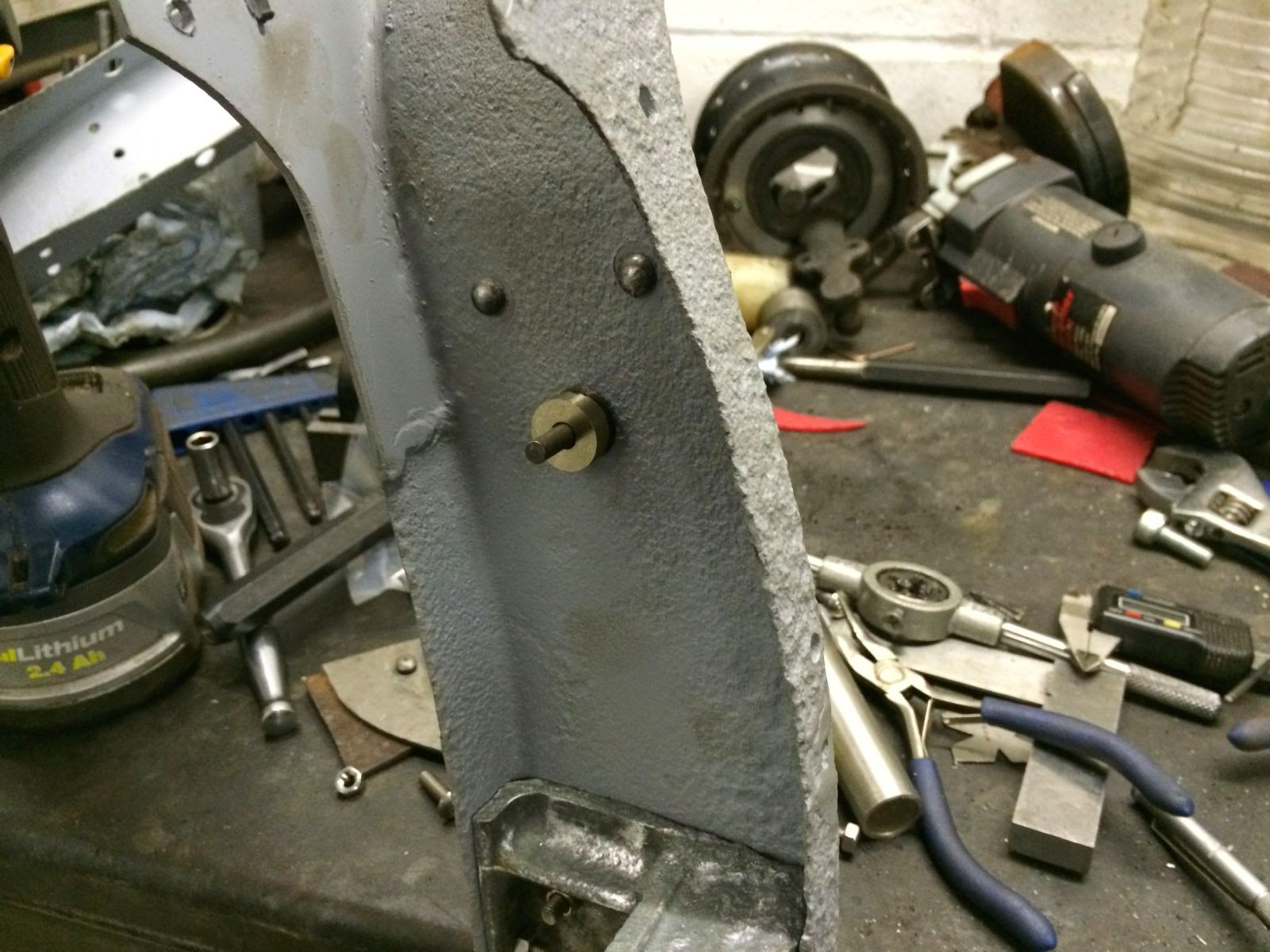 The vice was in use at this time, but I found another way to hold rivets for sawing that might actually have been better than the vice. I held them in the tailstock chuck of my lathe. 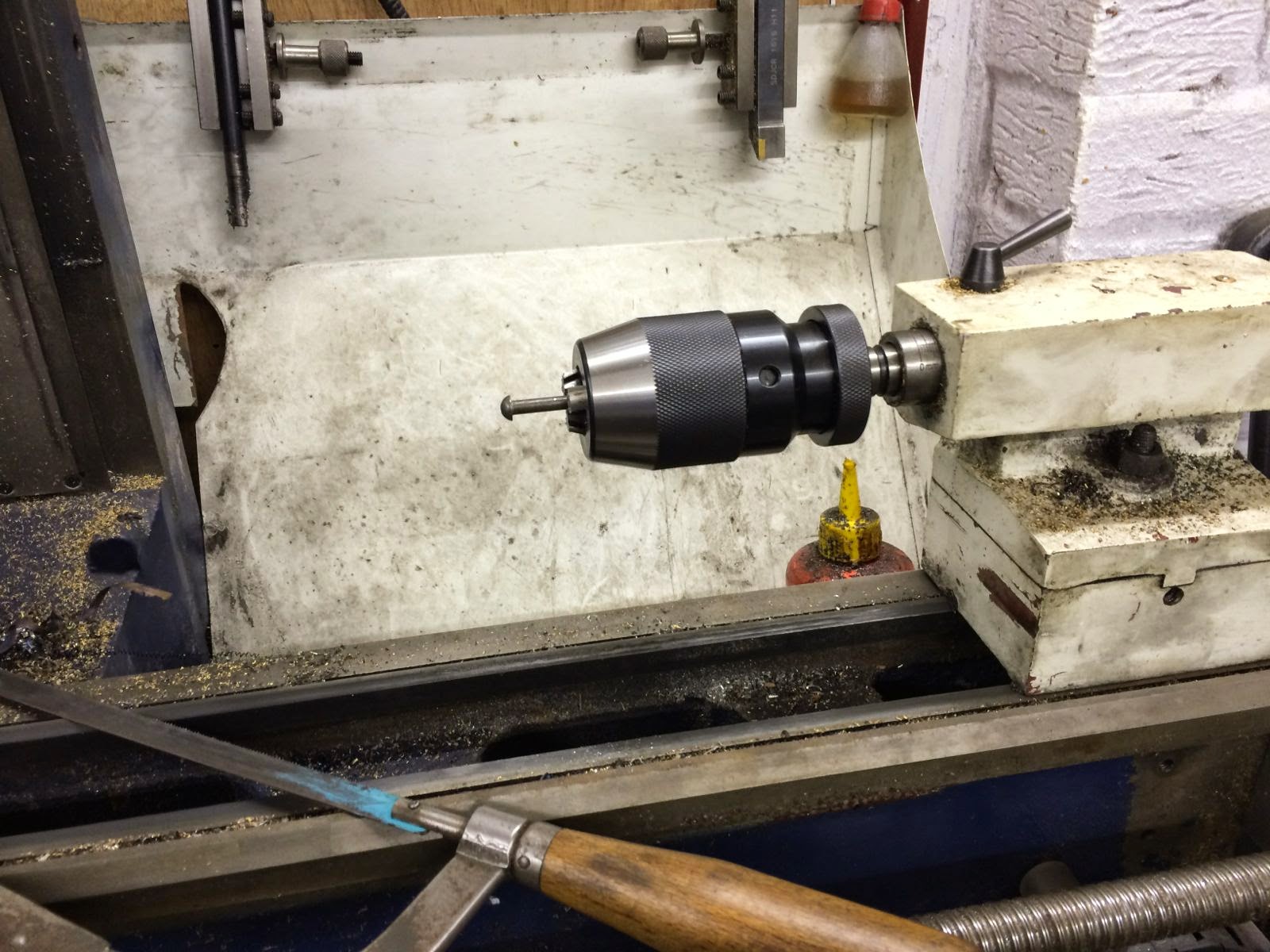 And now some gratuitous shots of rivetted joints :-) 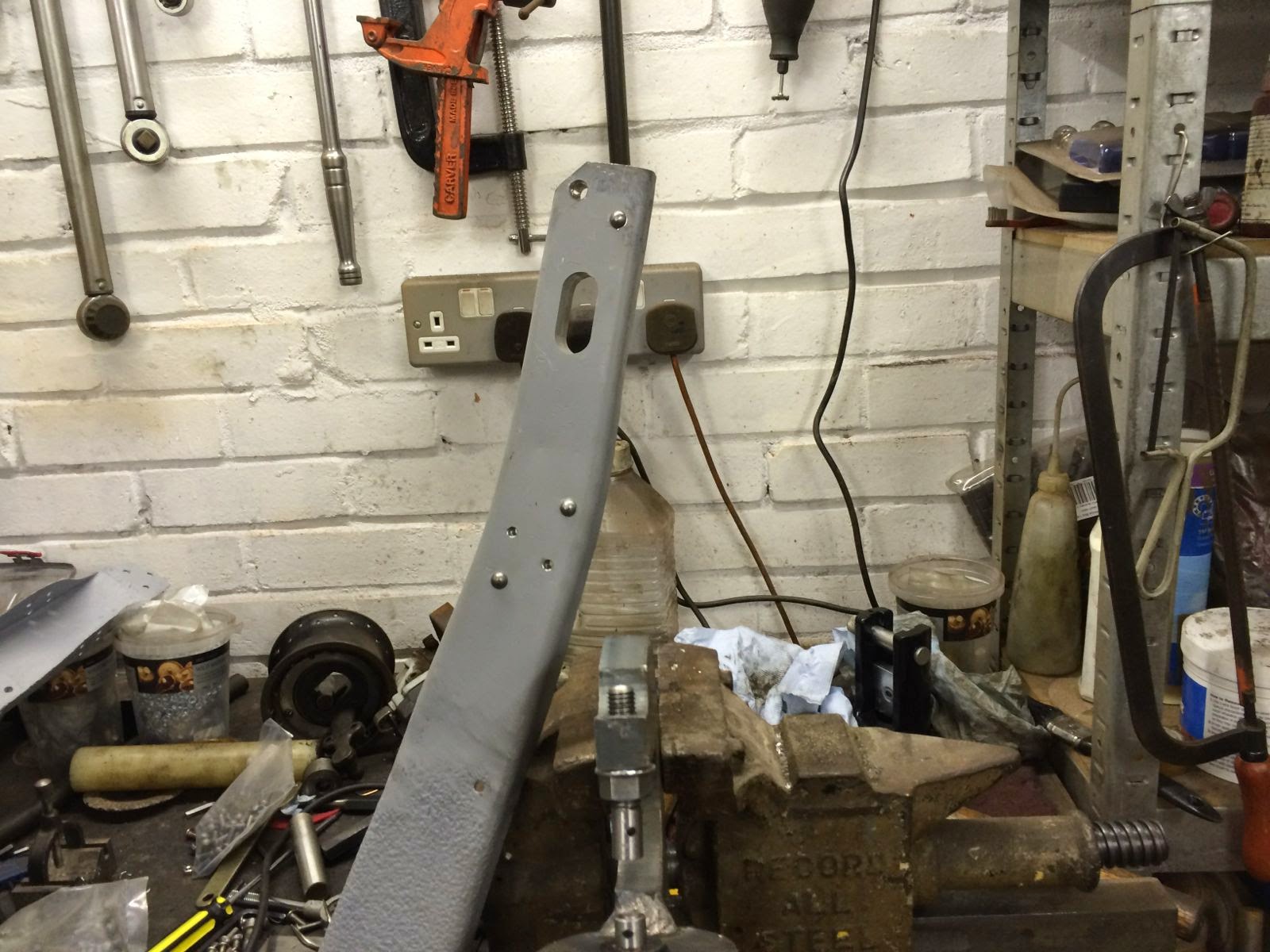 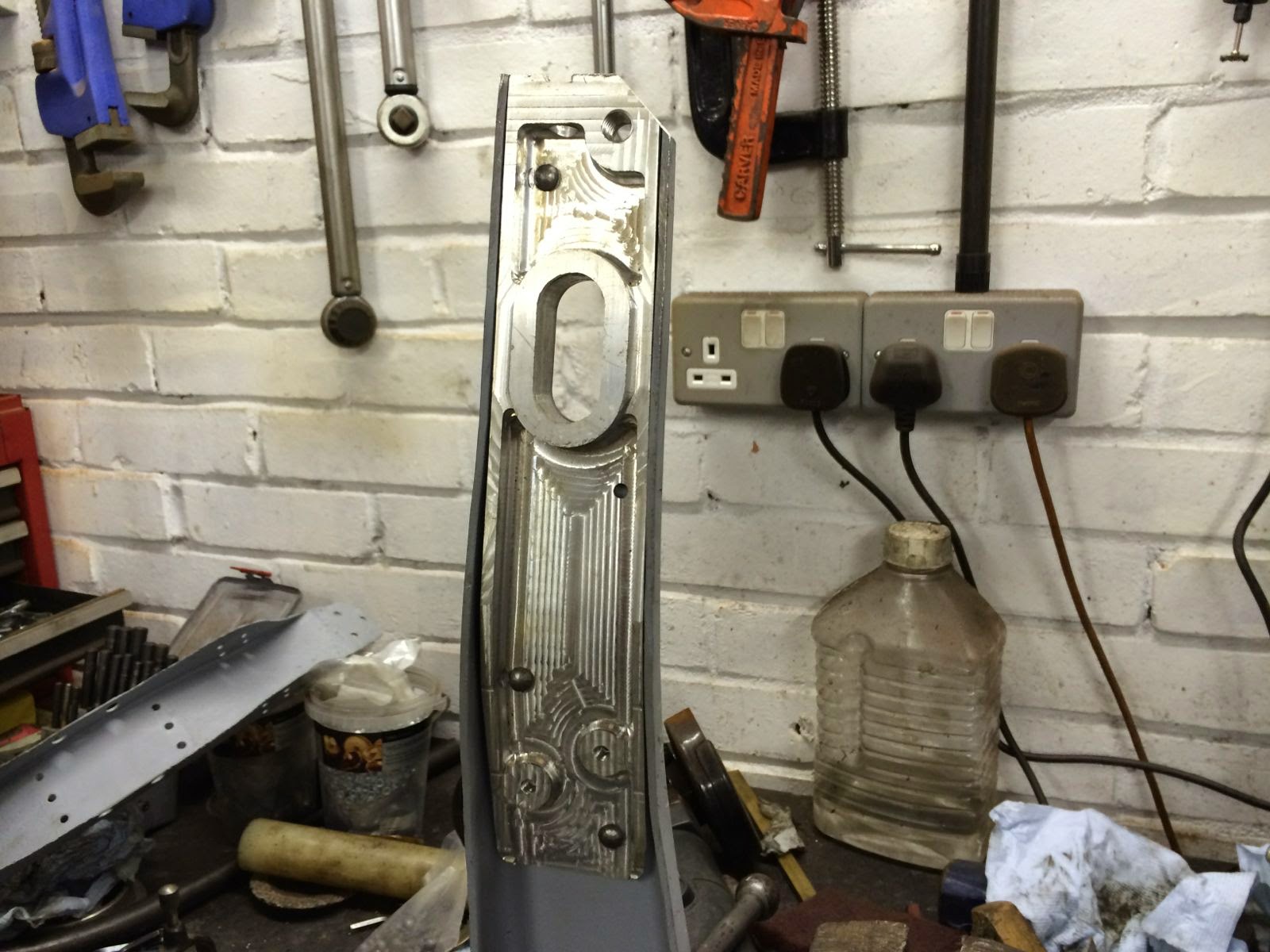 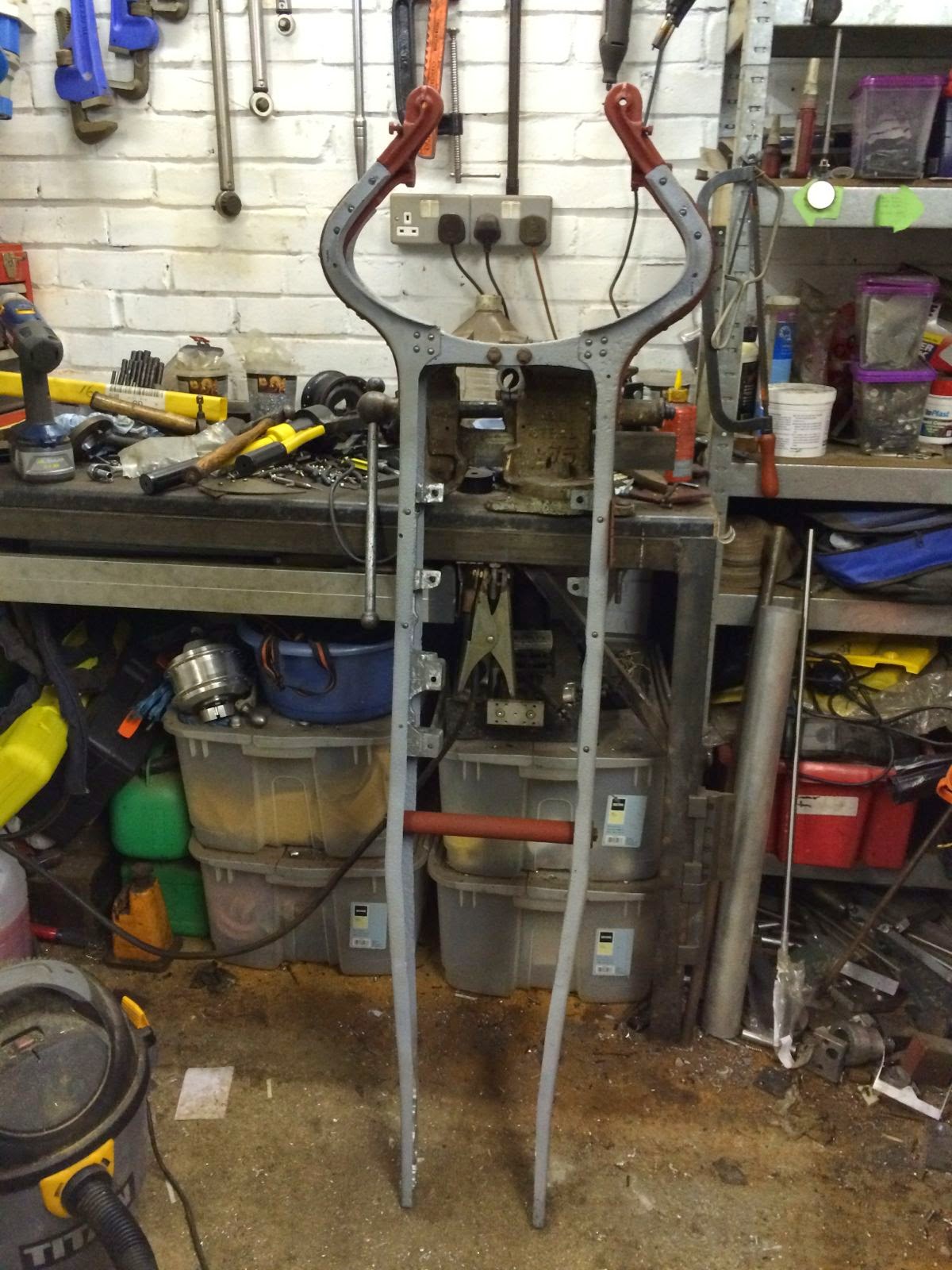 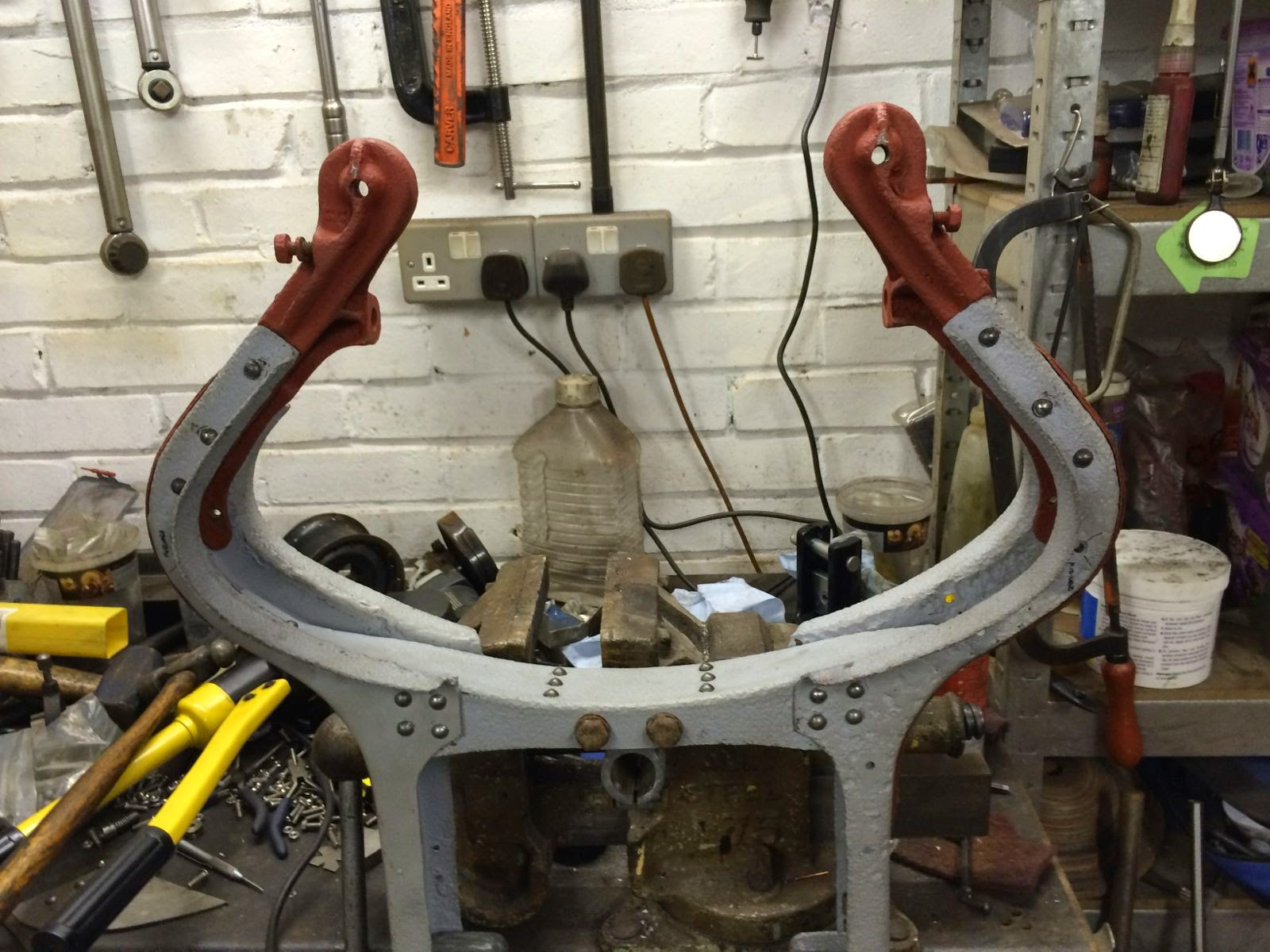 Two Wheels on my Wagon.

Both of the wheels had broken and/or rusty spokes. I didn't fancy trying to use them, so I ordered a new set of spokes and nipples from Central Wheel Components. I had never tried wheelbuilding before, but a couple of youTube videos went a long way to dispelling any fears I might have that it was complicated. If you can centre a 4-jaw chuck then you can true a wheel, and the spoke pattern on a standard wheel is fairly easy too, the spokes only reach the correct holes.

I just snipped through the existing spokes to remove them, they weren't worth keeping. I was surprised to find that the rear hub fell apart into 5 parts when the spokes were removed, but that appears to be intentional.

Not that I am tight-fisted, but I made my own truing stand: 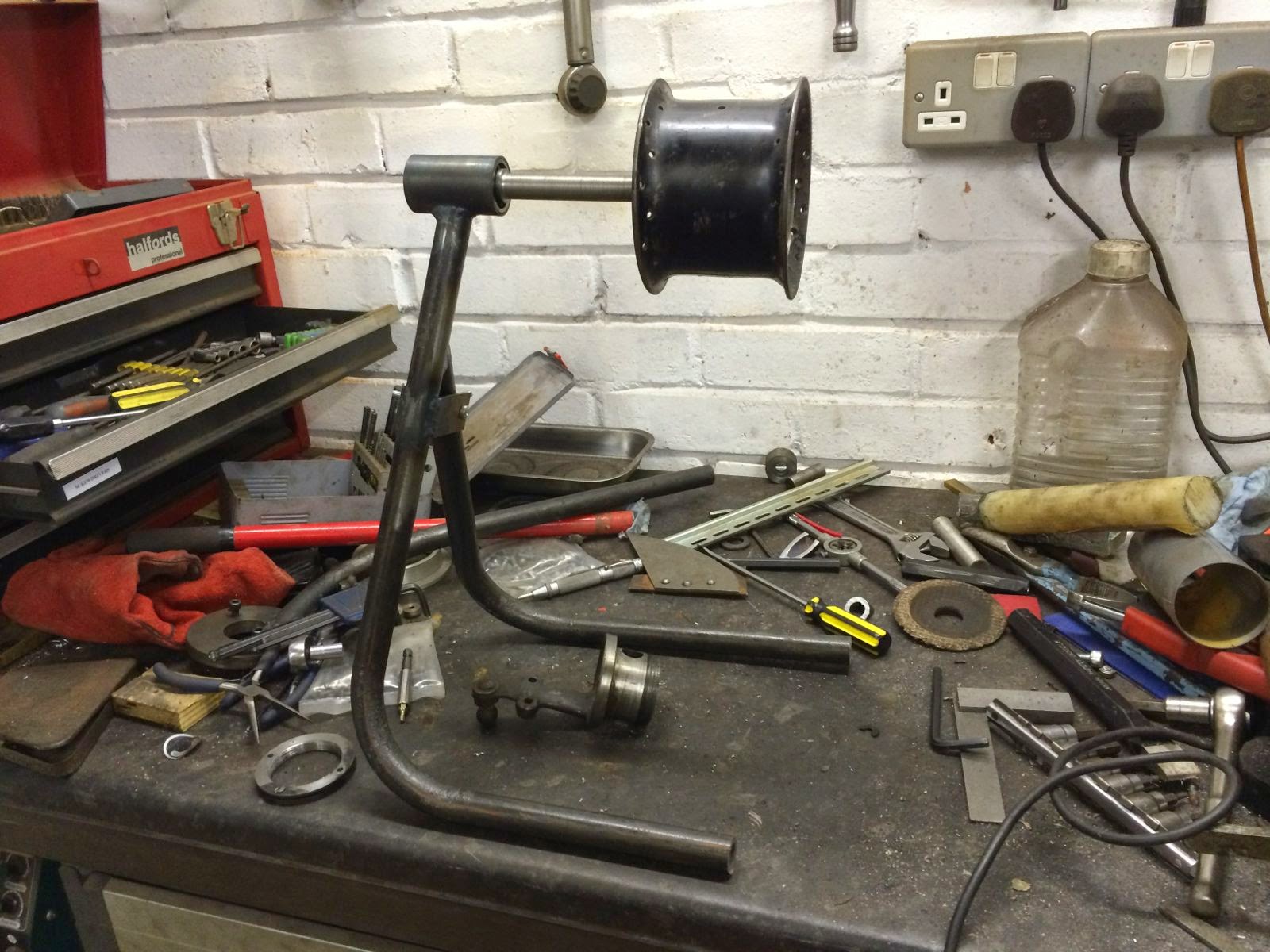 And, in fact, my own nipple spanner. 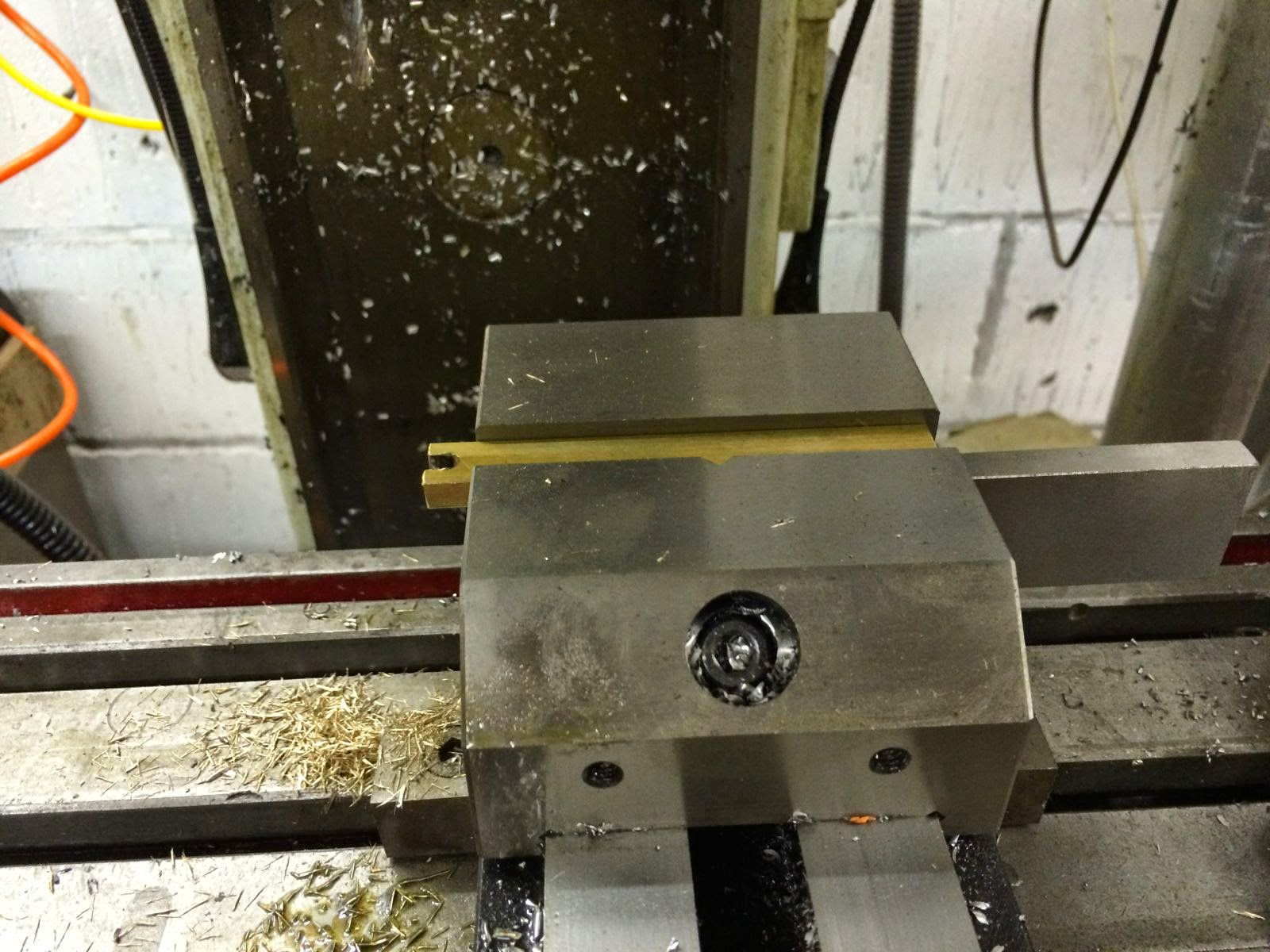 One complication in the Ner-a-Car rear wheel is that the spokes go in from the brake drum, and it's a bit tricky to arrange them. I ended up inserting them all, then taping the crossovers so that I could flip things. 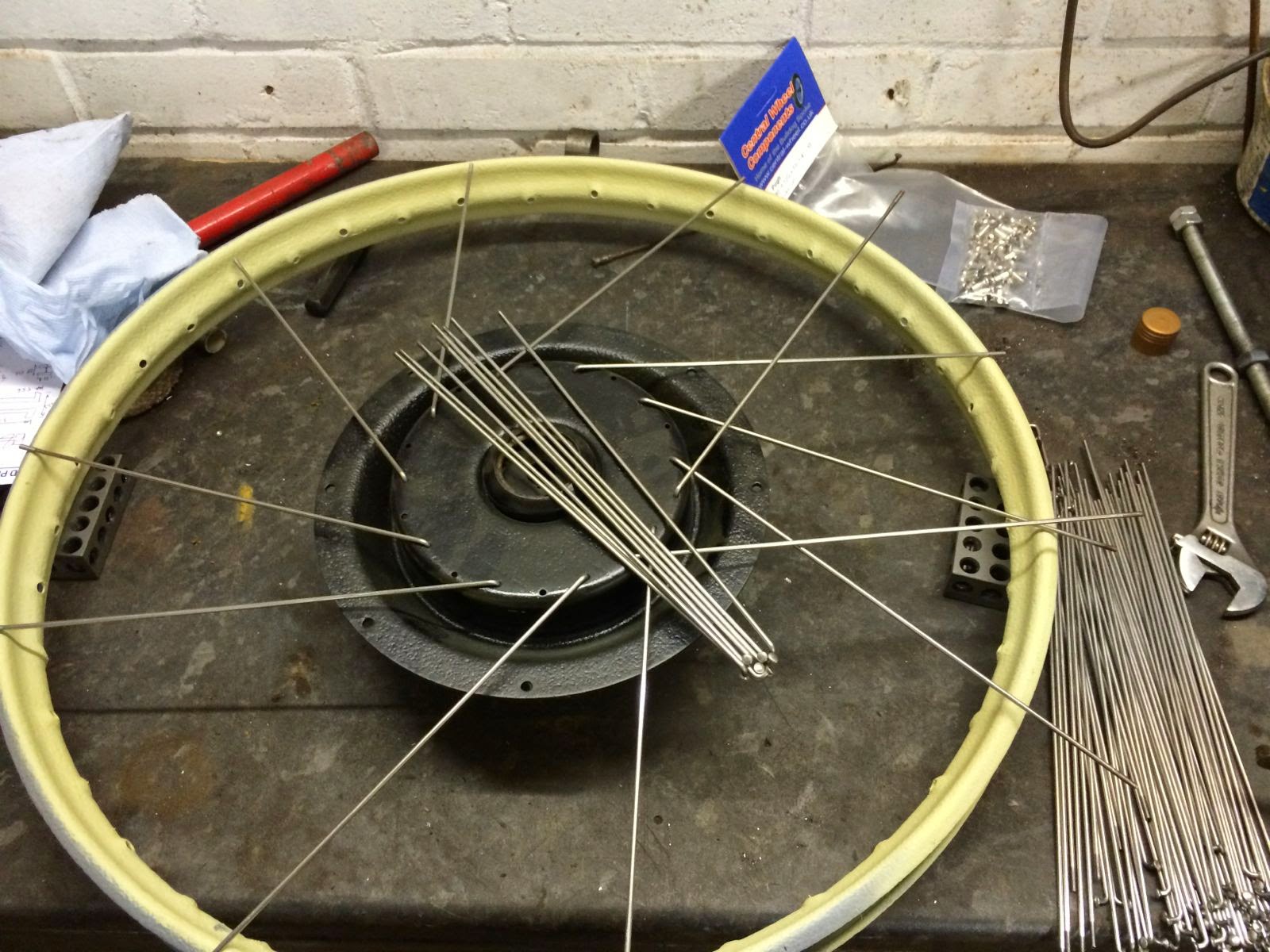 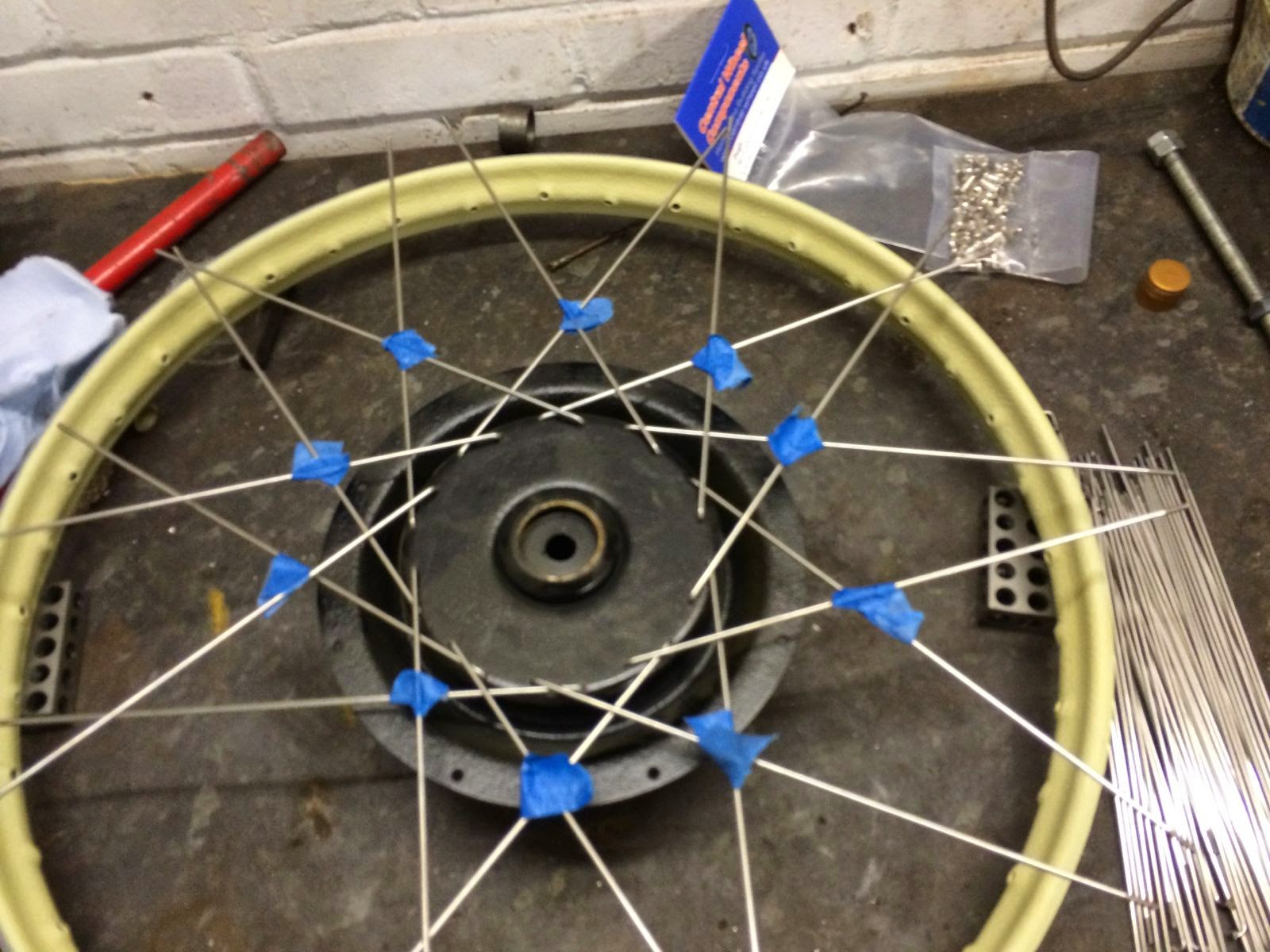 In only many hours I had a pair of wheels ready to fit, complete with a set of beaded-edge tyres from a nice man on eBay. 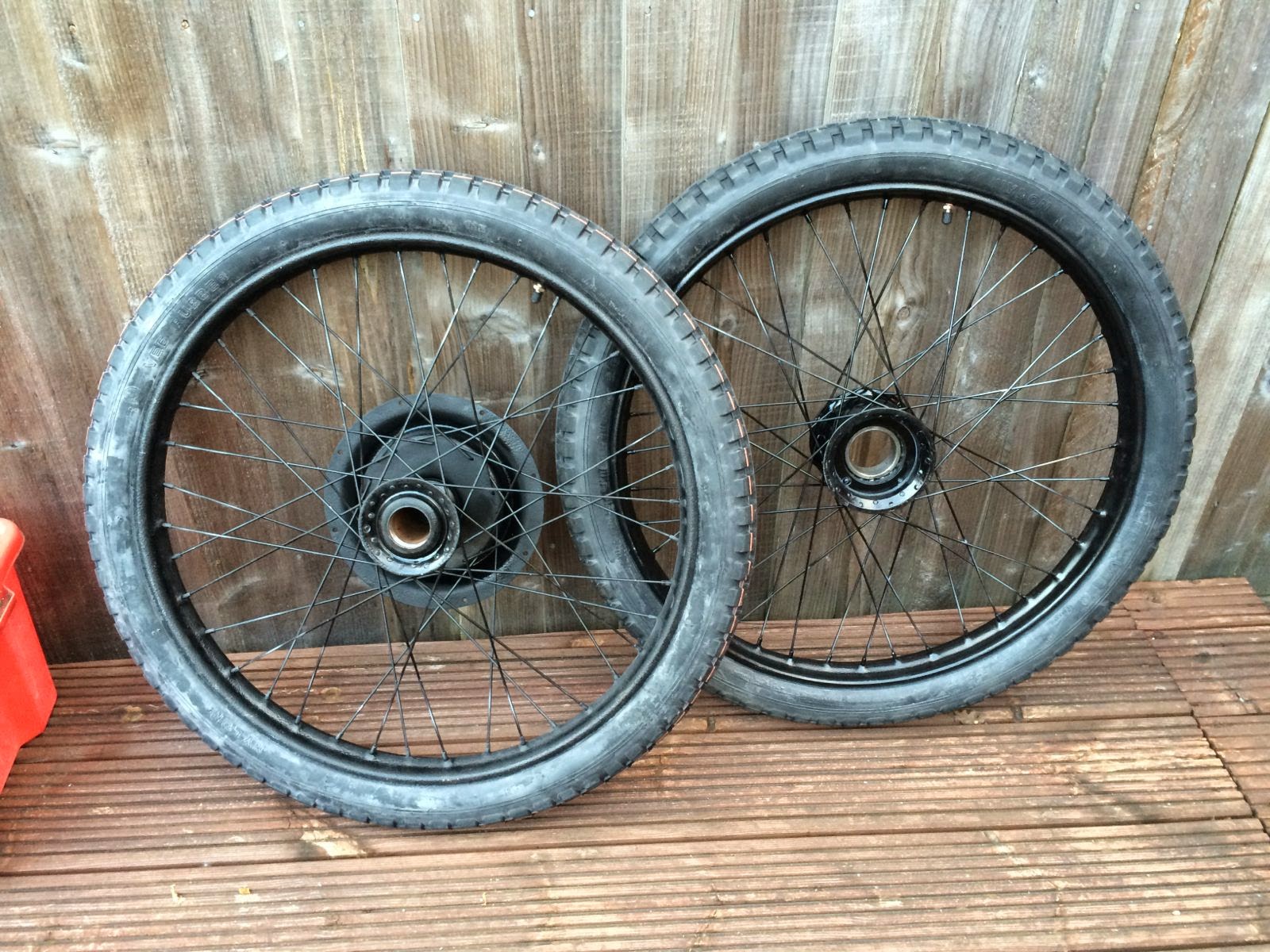 The Ner-a-Car has a very odd arrangement of wheel bearings. The whole hub just falls apart without the spokes, and then the wheel spindle sits on a couple of aluminium bungs, and then the whole thing is tightened up by a long stud and two nuts. The excellent Ben Geutskens site has the drawing. I didn't have quite a few of the parts involved

Luckily I enjoy working on my lathe, and I could make parts 350, 361, 362, 356 and 371 quite easily. I like the lathe so much that sometimes I make parts on it that anyone else would mill. Part 351 is a case in point. It's the right-side tensioning widget, and it is also necessary as otherwise there is no way to get the rear hub assembly in to place. Once you have removed that then you can drop the wheel off of the brake plate. In fact you can leave the brake-plate in-situ, which I suppose is quite nice.
This is the part taking shape in a 4-jaw chuck. There is a vaguely sensible reason for this, the lathe makes it easy to generate the radiuses. 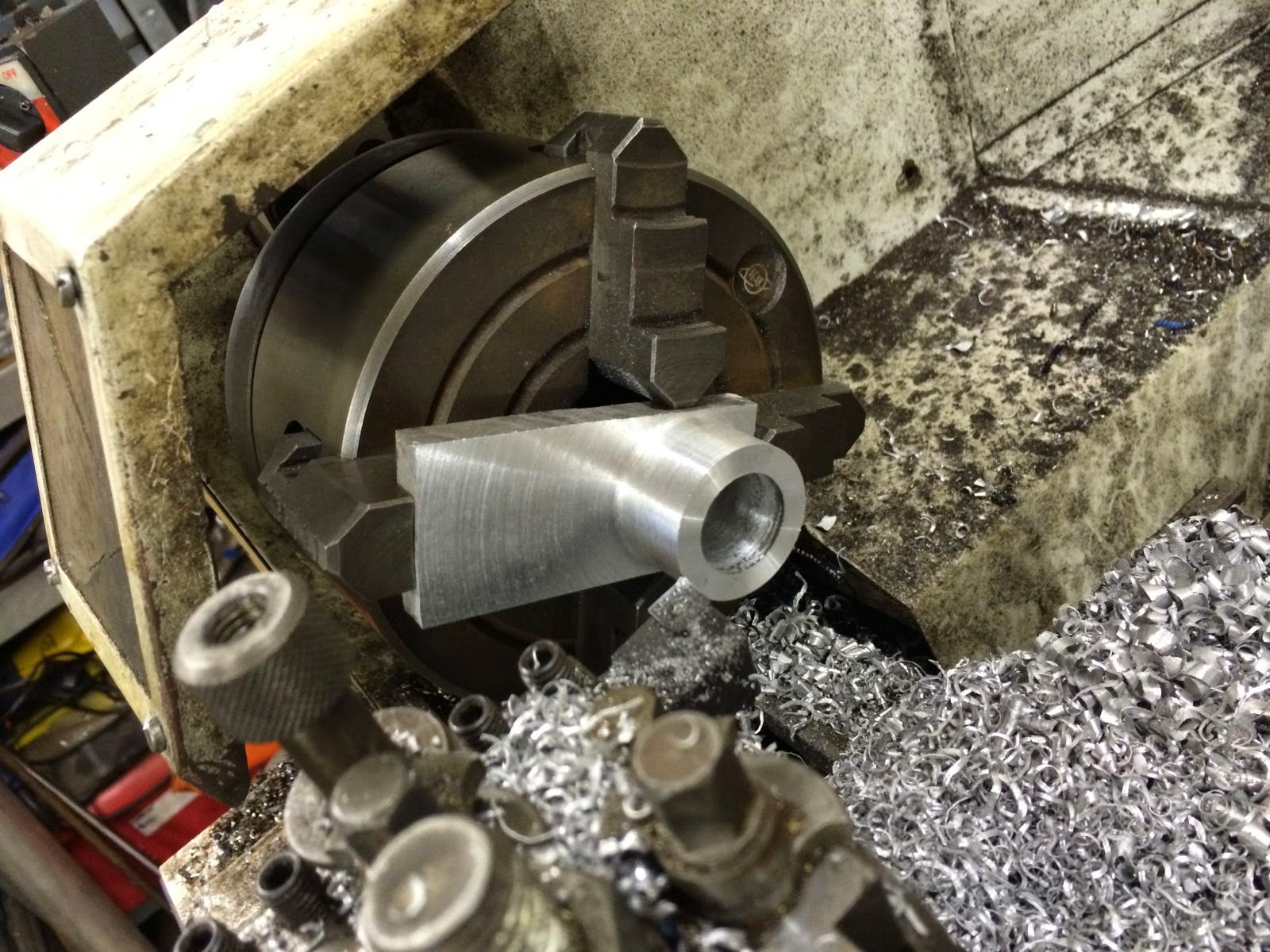 But some things are just much easier with a mill, especially a CNC one. 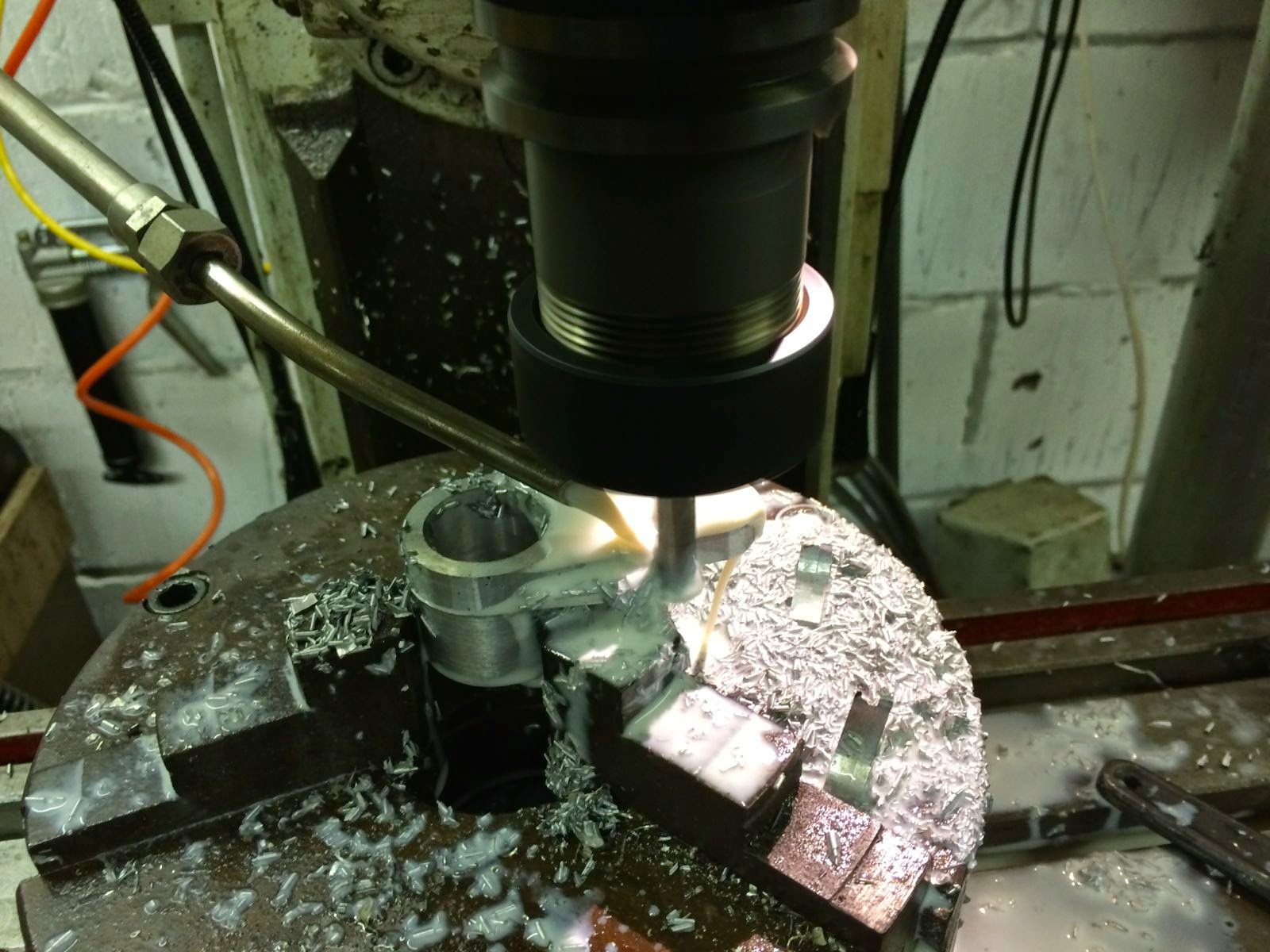 This picture shows most of the spindle components. It lacks the through-bolt and the bevelled washers, and the nuts. And the balls. But other than that, and the wheel, it is complete. 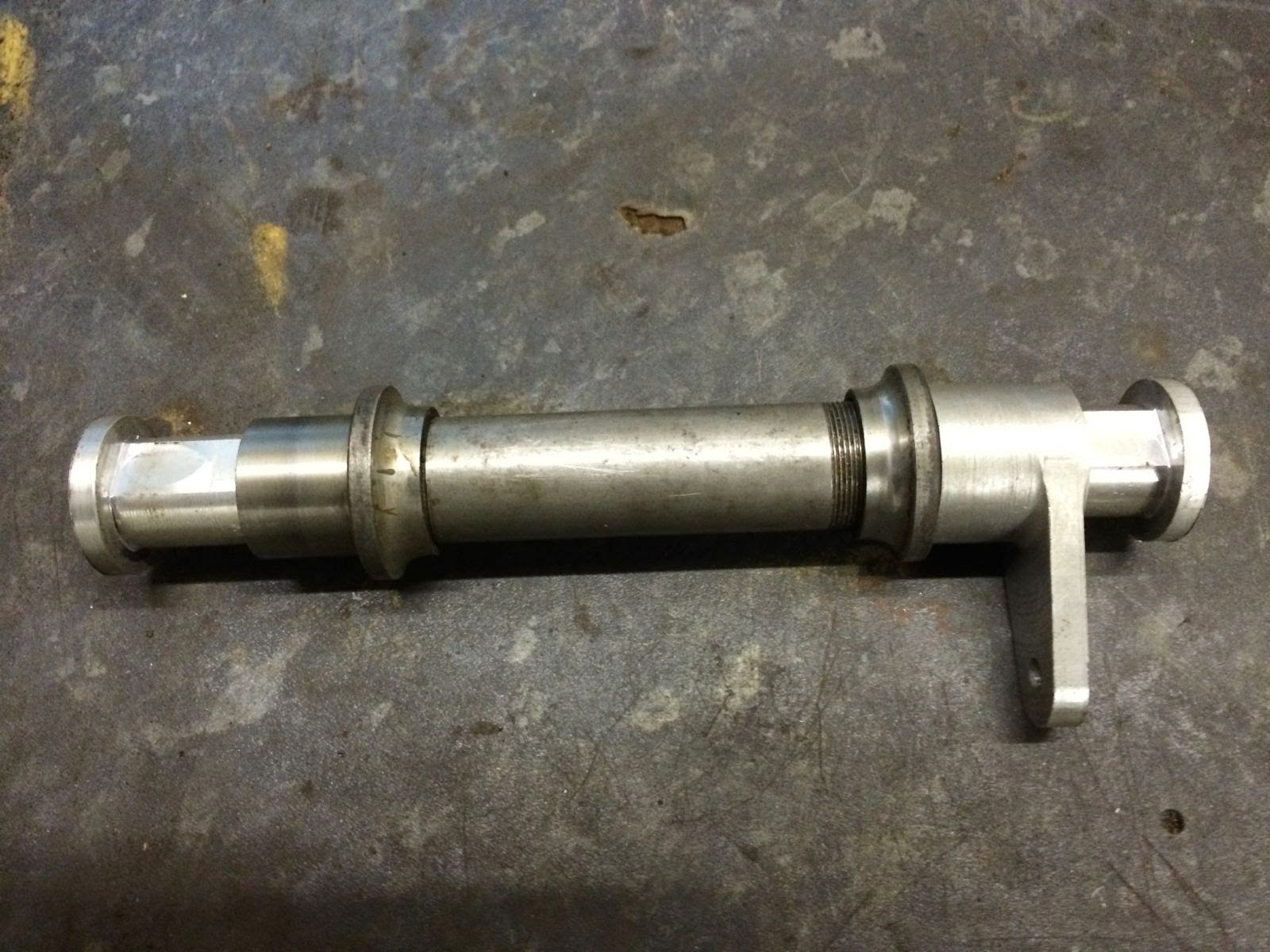 I couldn't resist a trial assembly, and now I can claim to have an actual "Rolling Chassis" (I have also spent a lot lot time priming, filling, sanding, and re-priming the front mudguard). 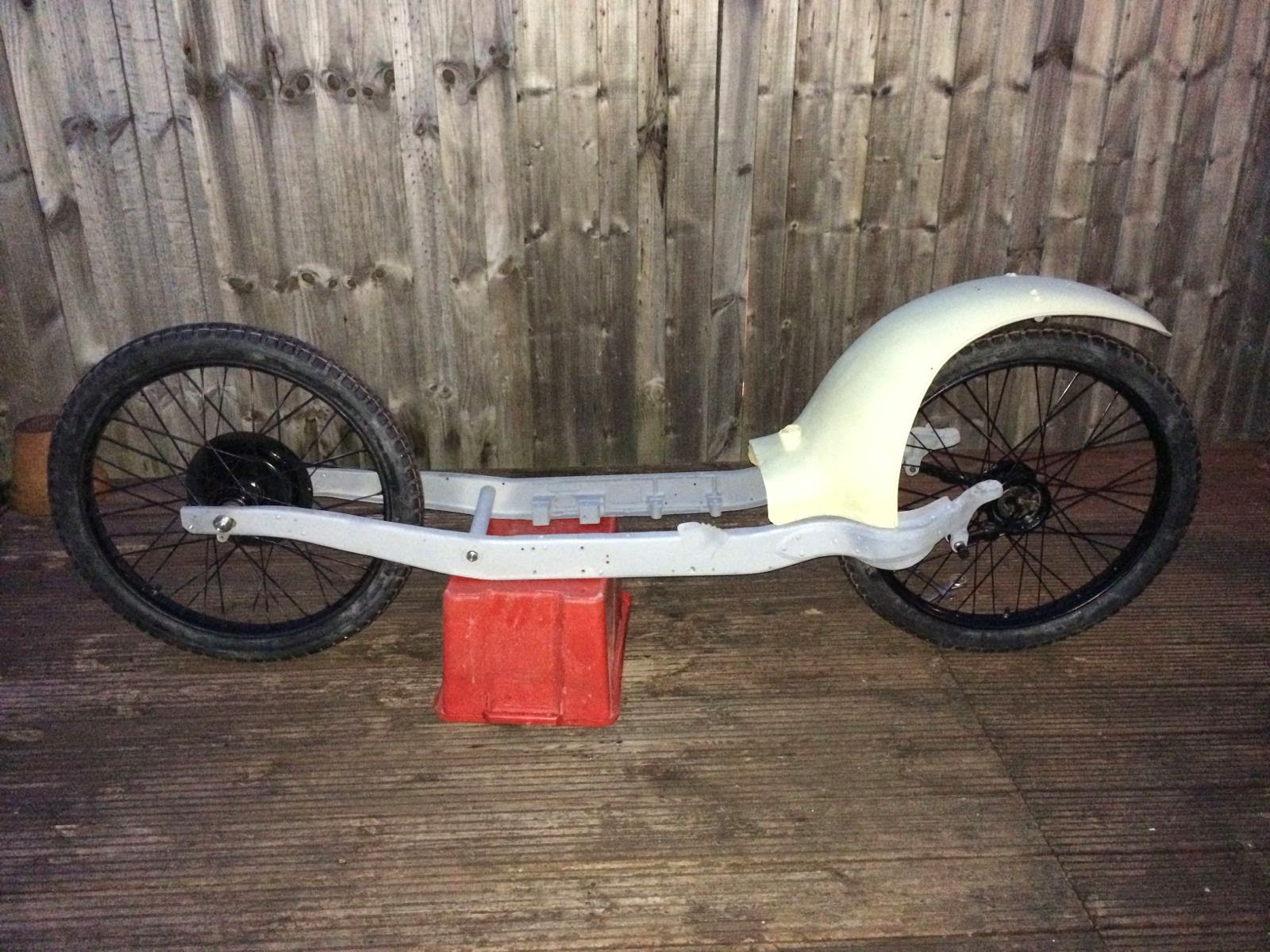 At this point I couldn't help plonking on an engine and some of the tinwork: 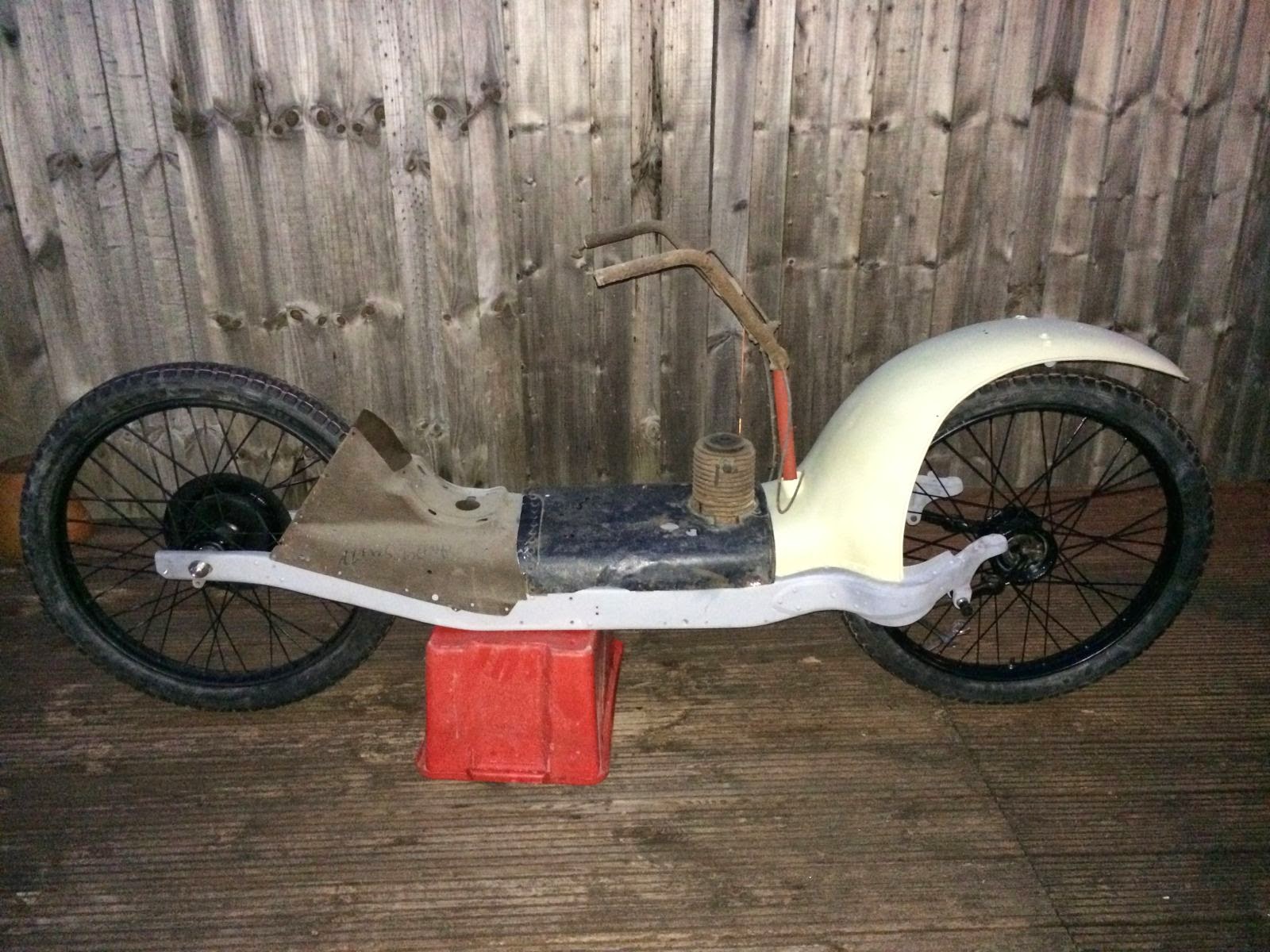 If it wasn't for the magneto, it would be rideable :-)