In the last thrilling instalment of the Blog I had made the fuel tank almost impermeable. Only two problems remain, the big hole in the top, and the absence of a small hole in the bottom.

The former problem was addressed by making a new filler cap. The filler cap is rather odd, as it supports the weight of the riders saddle. (On the US models this is not the case, they have a seat-support widget in the middle, and the filler off to one side.
Because the seat sits on top of it, the filler has the standard central hole, and then another off to one side that the seat won't block.
Inside the cap is a perforated brass widget which holds (according to the original drawings) a "hair packing". Looking at photos of original caps it really does seem to be filled with horsehair.
Once the lathe is programmed for a job like this it doesn't make much sense to only make one, so I made three in case someone else wanted one.

As they came off the lathe (machined or metal-spun, depending on the part) 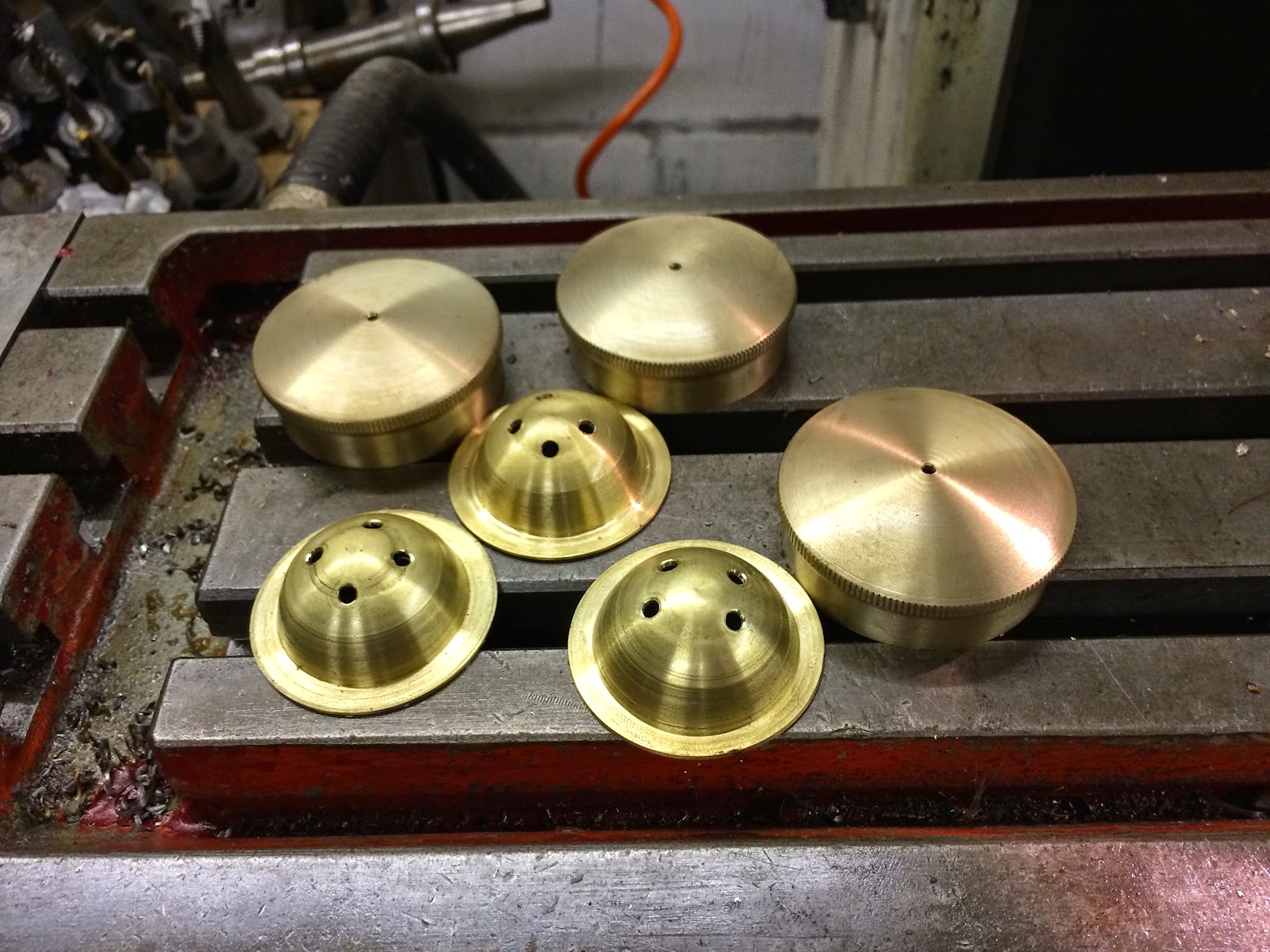 And as they looked after Nickel plating (ooh! Shiny) 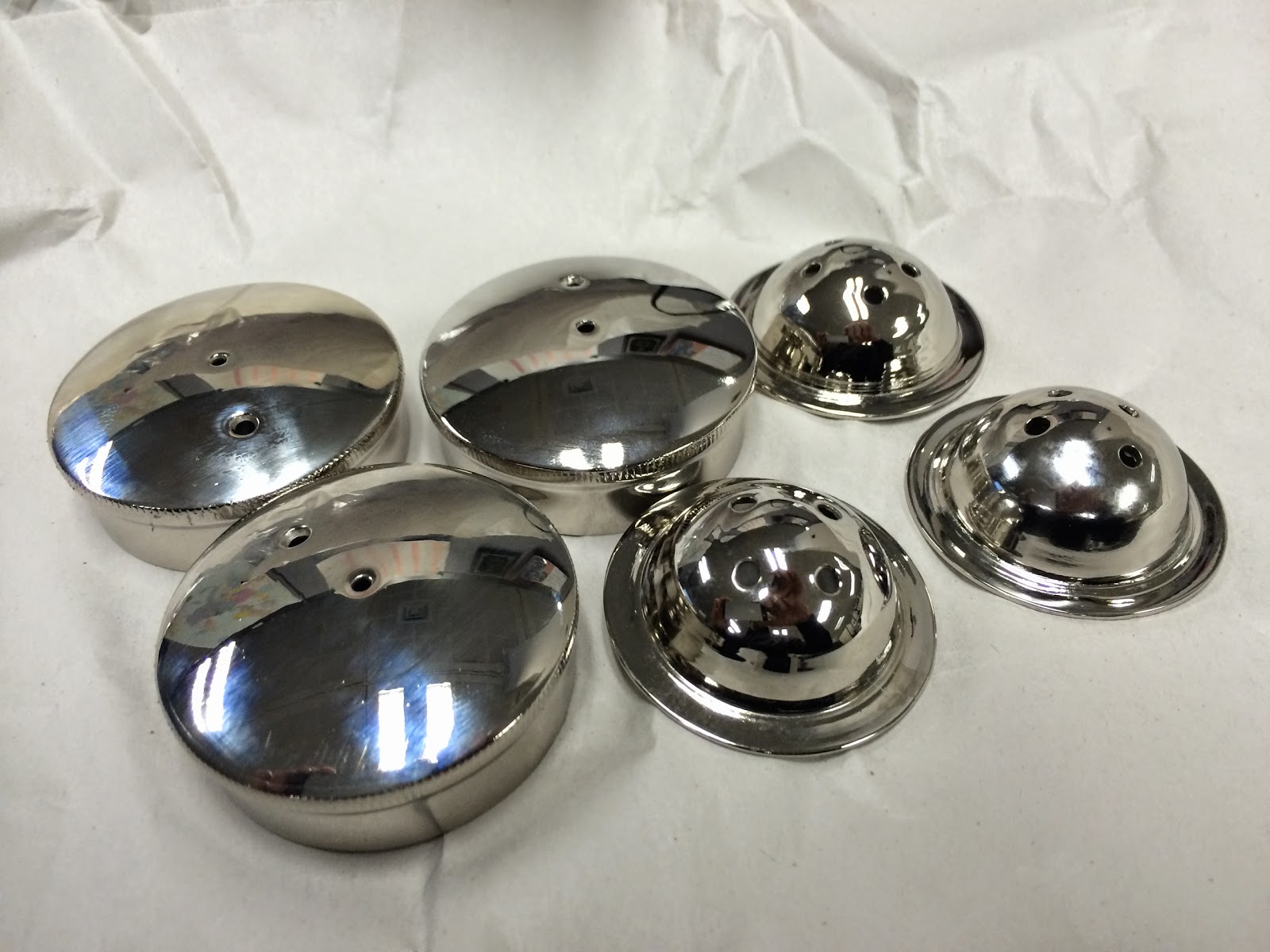 I bought a rear mudguard from a company I found on the interweb, auto-cycle engineering.  Apparently the picture of the mudguards they sell is deliberately illegible, as they prefer folk to contact them and discuss their requirements. Seems a strange way to carry on, to me. But after a rather protracted buying process the mudguard duly arrived. It's a tad narrow (this was known) but seems to fit the rear valance thingy pretty OK. With the mudguard to work from I could then start on the saddle/rack supports. These are 7/8" wide, and my metal strip was 1", so I had to machine it down on the mill. It took a few bites, as the strips are longer than the travel of the mill, and much longer than the width of my vice. 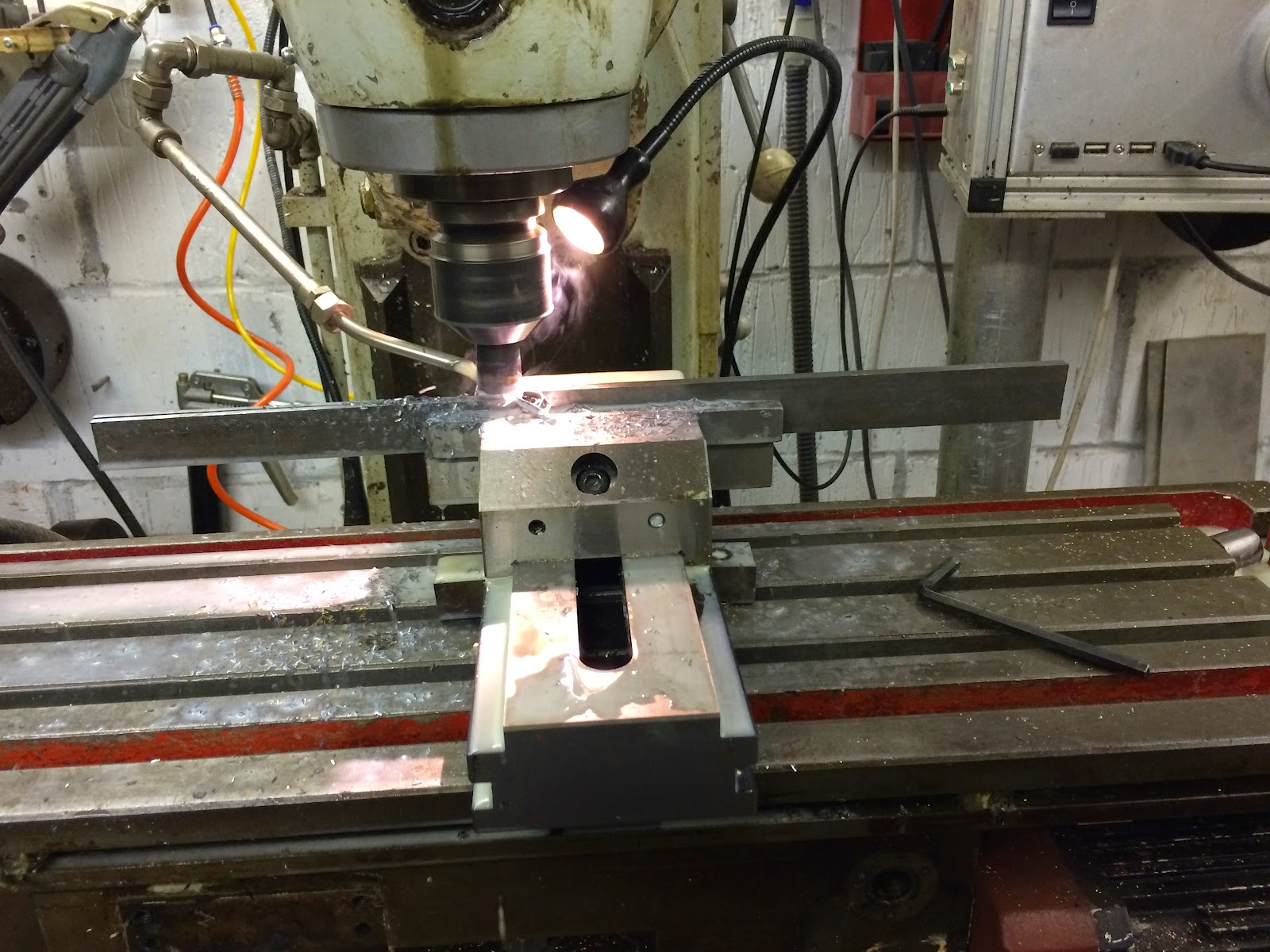 A bit of bending and hitting, and a bit of heat for the sharp bend, and we have: 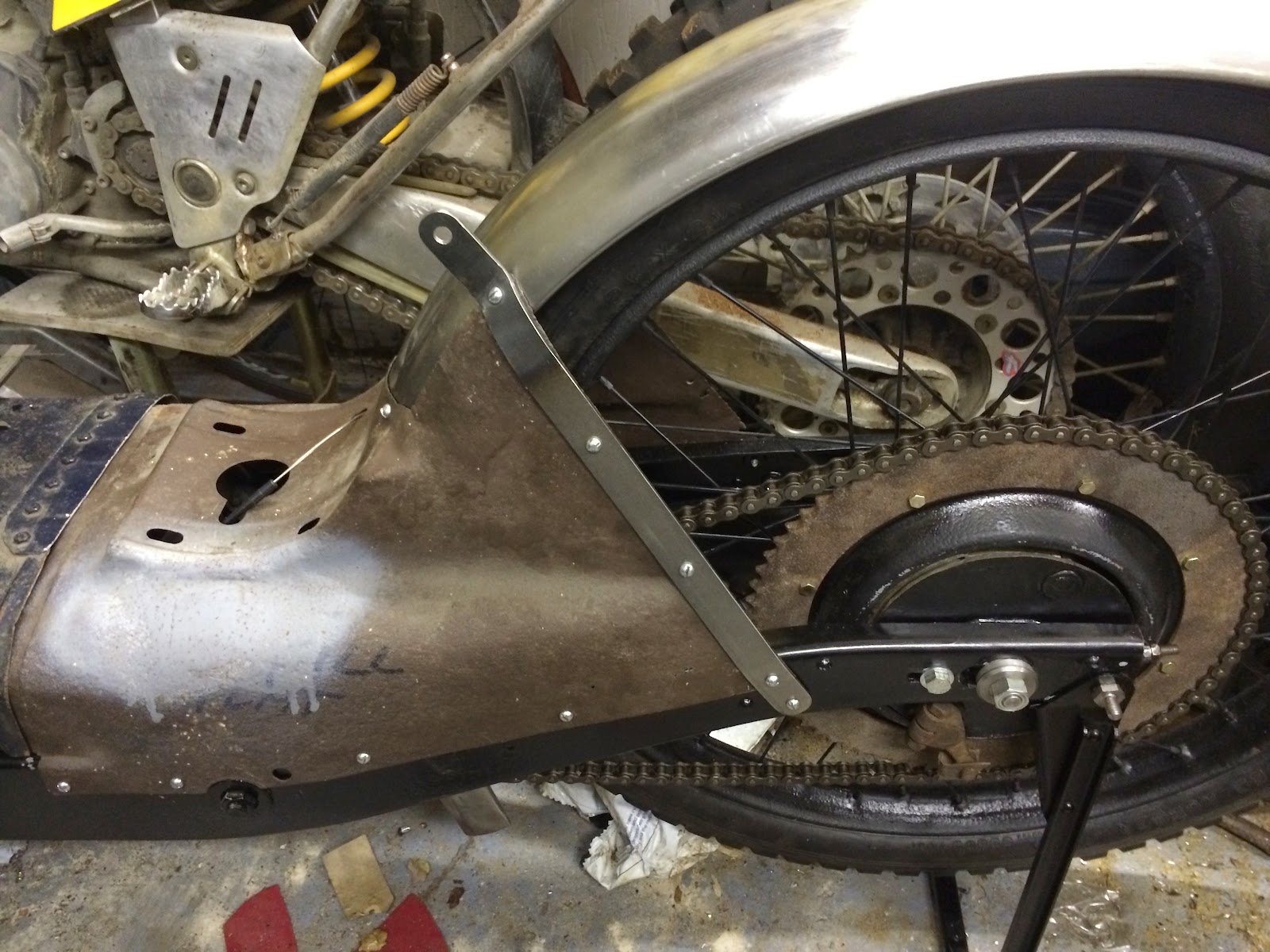 The rear stays are tubular, but just squashing a tube to make a boltable end doesn't give the right effect, so I made a tool to give a more original-looking treatment to the tube ends. Just a couple of U-shaped slots of the right width with the corners softened a bit with a file. 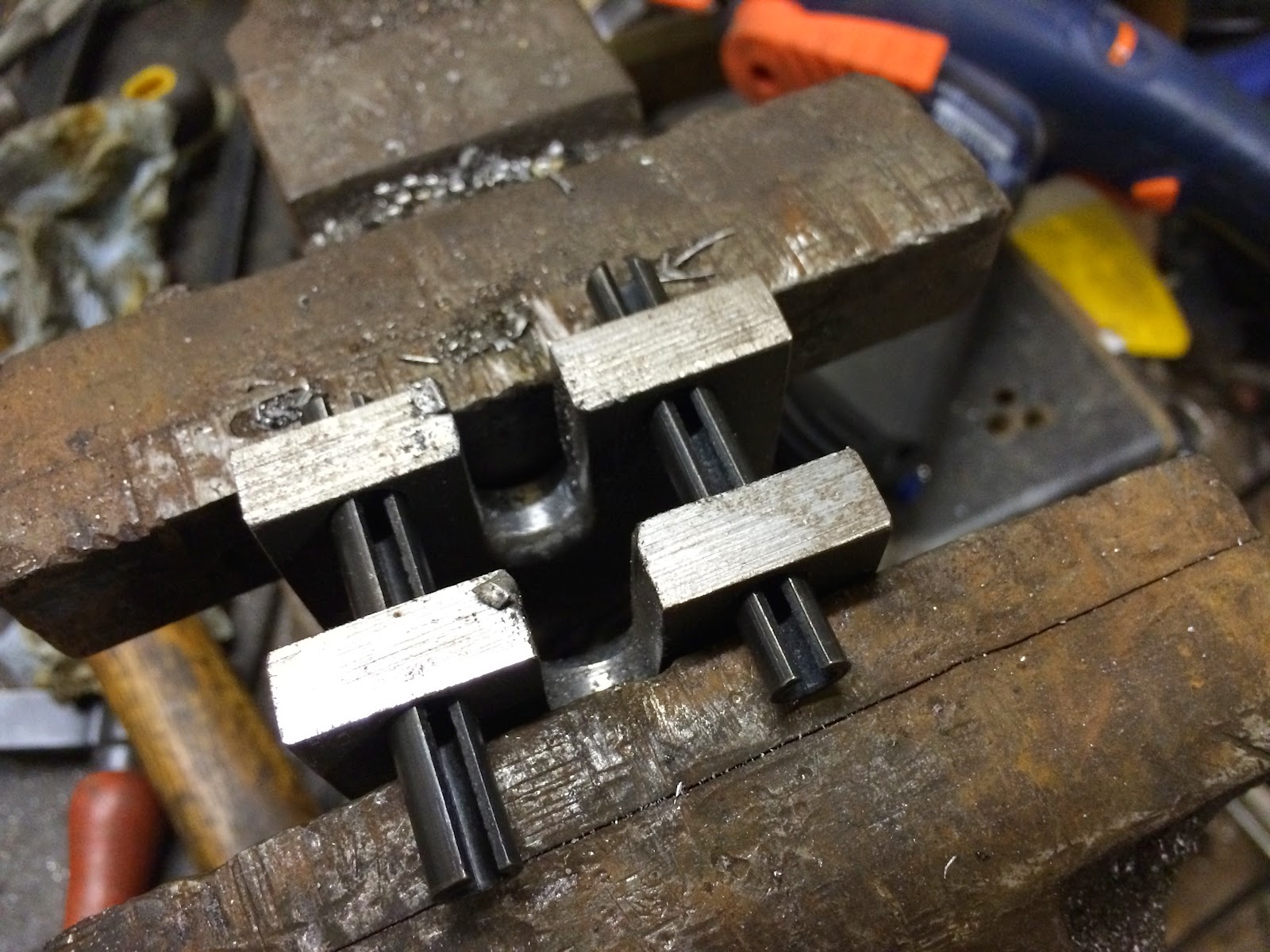 And this is what the result looks like. Some folk have commented that I seem to delight in making a special tool, then using it once. Well, this tool got used 4 times :-) 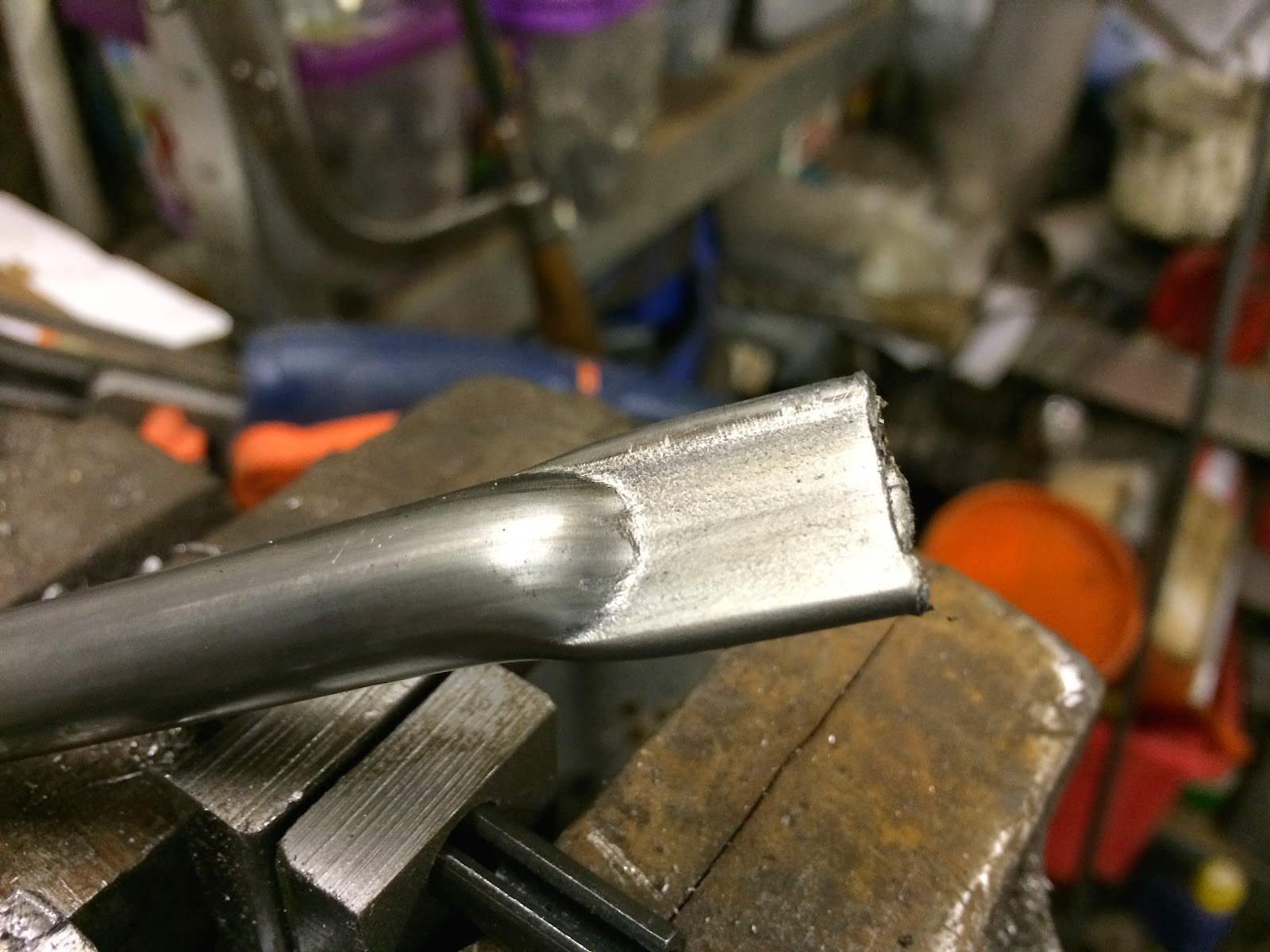 As far as I know all UK model Ner-a-Cars had a rack (it is hard to see how the rear end would hold together without one). It is made from surprisingly slender material considering the heft of the bits it bolts to. So far I don't think I have found any welding on the Ner-a-Car, and the original racks appear to be silver-soldered, so that is how I made my replica one: 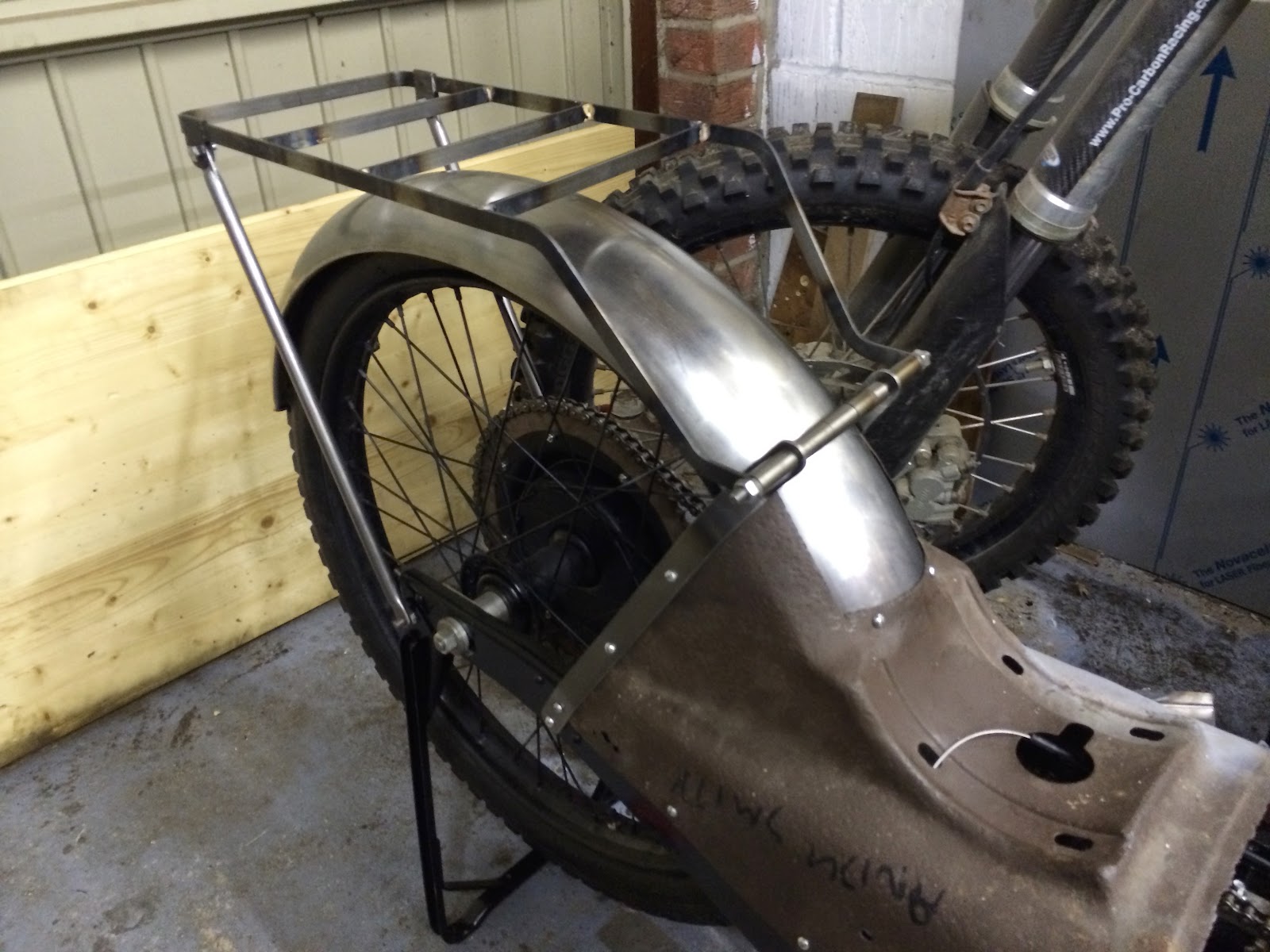 From the rack to the mudguard there are two strangely hefty braces, with a stiffening feature in them. It took me a while to figure out a way to put the stiffener in, but then I realised that I could use the hydraulic crimper that I bought to make the rivet squeezer. I turned up a short bit of bar with rounded ends, and slowly worked down the strip. 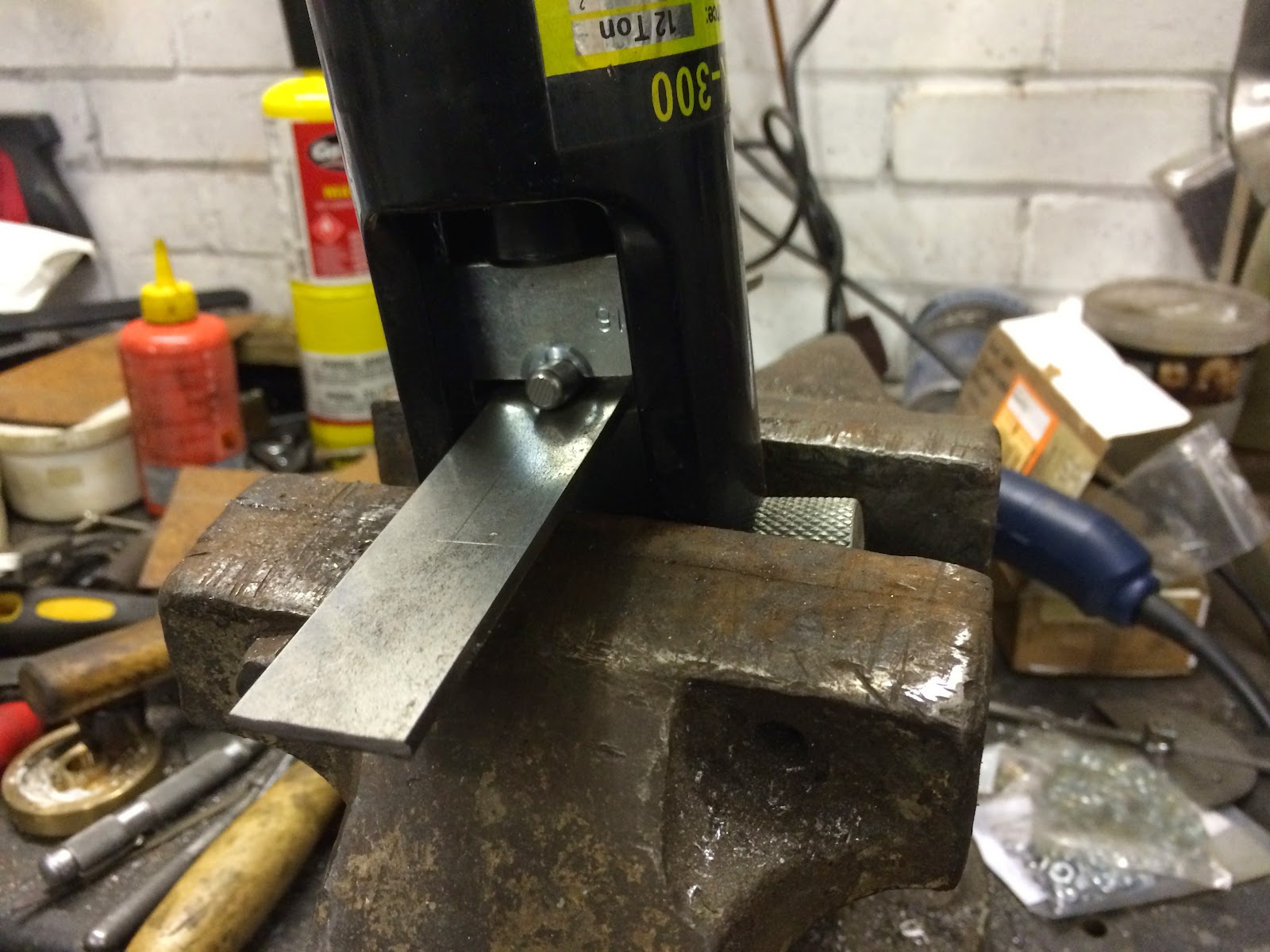 Not exactly like the factory, but adequate, I think: 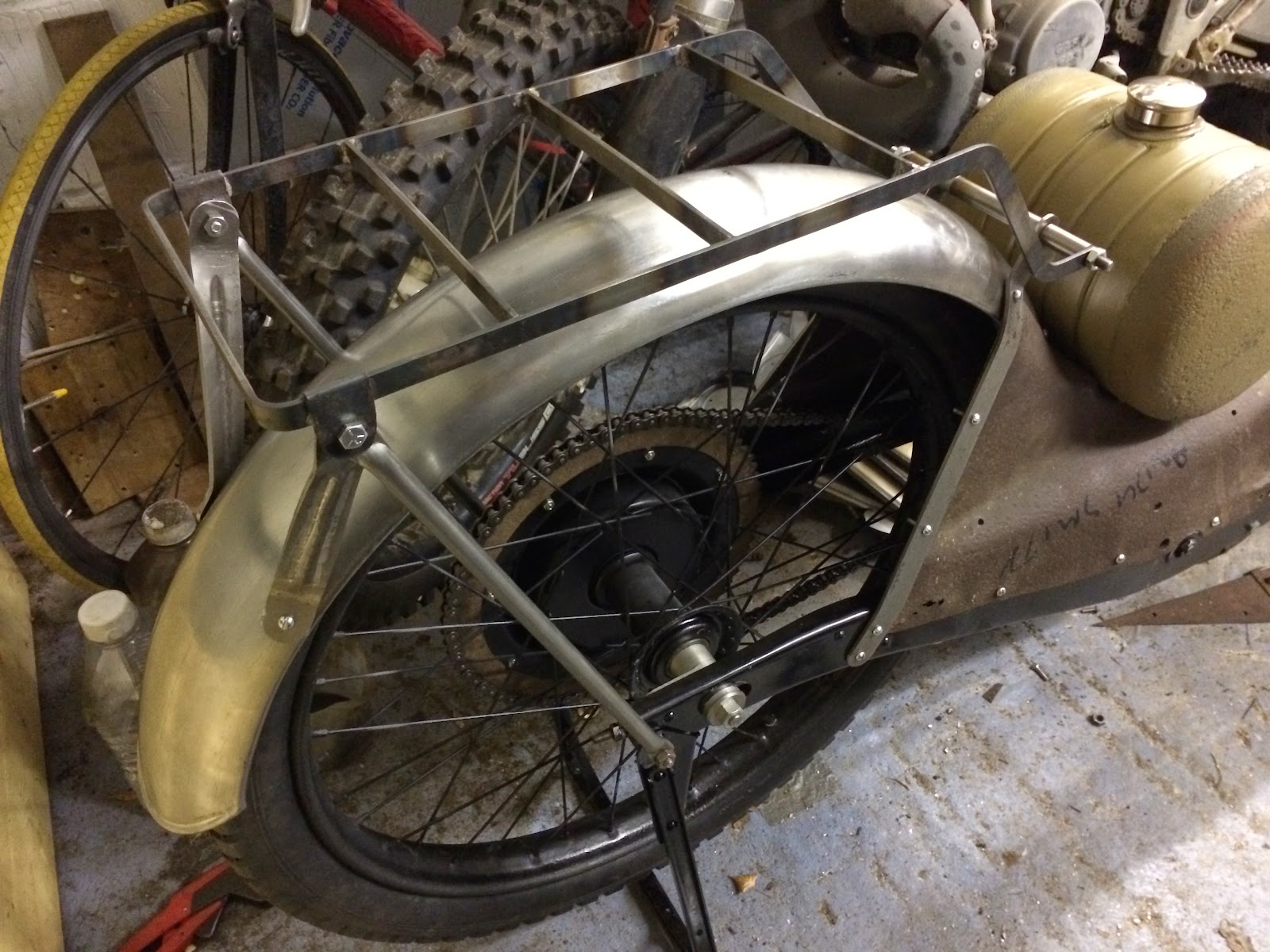 With the back end of the bike rapidly approaching, it was time for the number plate. I made a replica of the one on Ben Geutsken's site, even down to the rust :-)
Actually, the rust is because I am using old Imperial-gauge steel that has been lying about for a long time. But actually I don't see this as a bad thing as it matches the other metal better when de-rusted. 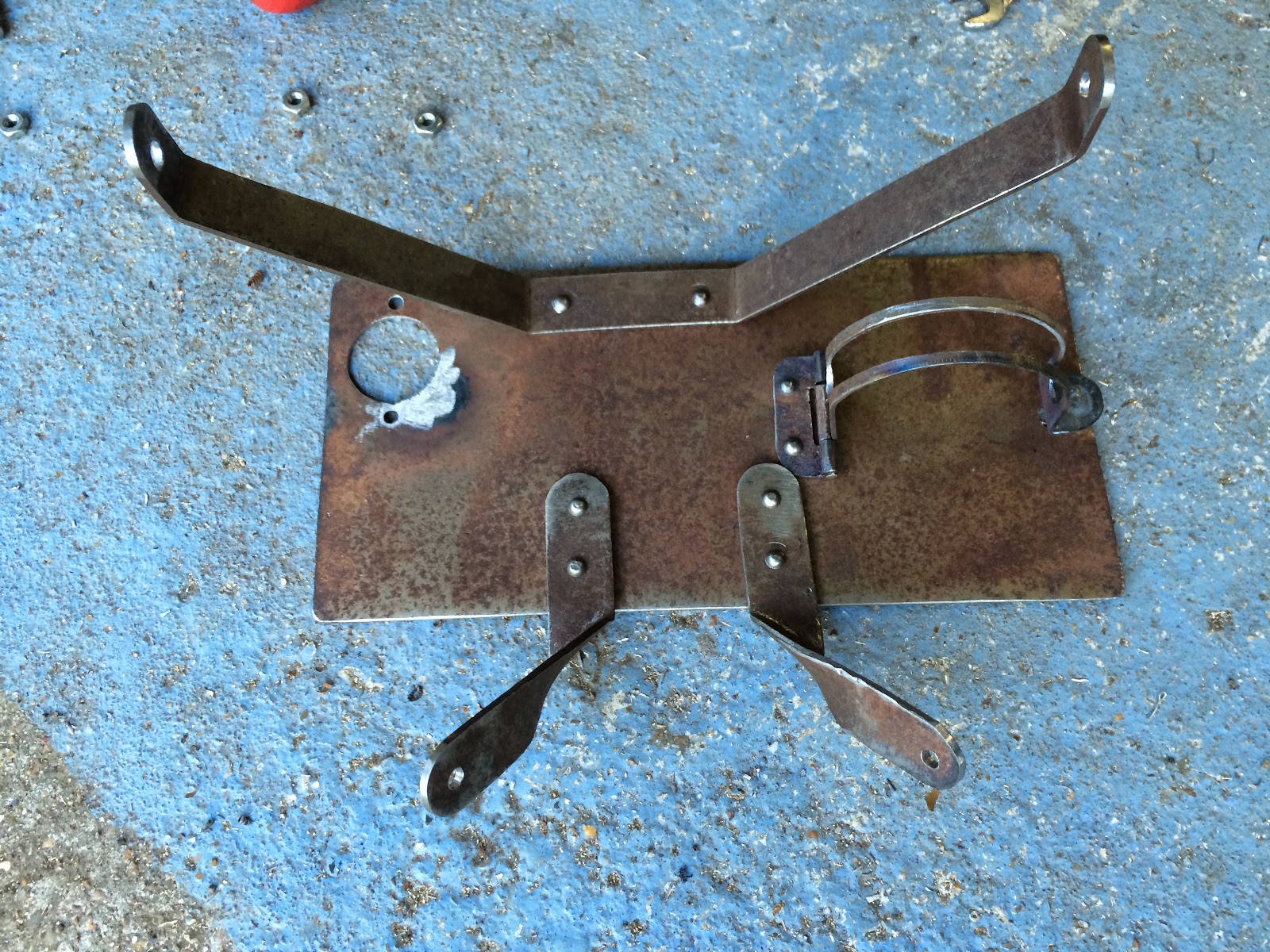 The two little brackets at the bottom were surprisingly awkward to get right. Each took many trips between the bike and the vice before the fit was right.
I couldn't resist a trial-fit of the genuine rear light I got from eBay.
It's a bit special, a combination electric and acetylene light. I believe that the acetylene lights were only intended for use when parked. It wasn't cheap, but then how many of them are there  out there now? 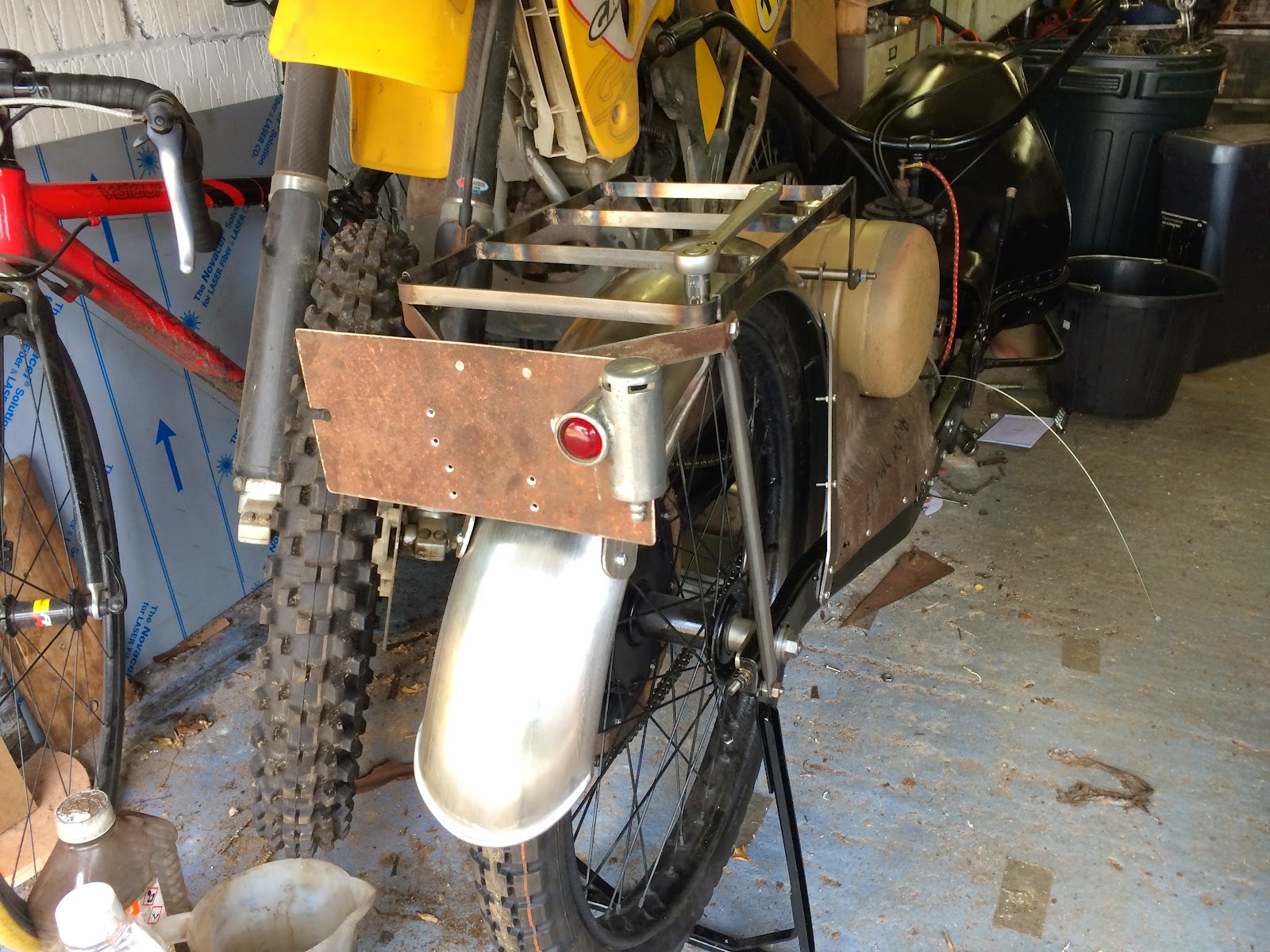 One thing very much missing from this picture is an actual registration number. I have written to the VMCC to ask them to certify that the bike really is a Ner-a-Car and not (for example) a Transit van owned by a chancer hoping to avoid road tax. Things seem to be moving a bit slowly, though.

At this point the bike is effectively complete. There is a lot of painting to be done, and some repairs to the original tinwork, but I have just about finished making parts now.

Well, other than the saddle, and that looks like being a real adventure.