Some years ago there was a film made with the title "I bought a Vampire Motorcycle", though I never got round to watching it. Last weekend, rather than working on the Ner-a-Car I went to WorldCon and found that since the last time went to an SF Con (in 1998) there has been an upsurge in the Steampunk aesthetic. It was there that I realised that "I am restoring a Steampunk Motorcycle"; Rivets, lumps of brass and odd spoked wheels whirling in weird and different directions. Exposed 40kV electrodes between the riders knees. It has it all. It even has gaslights!

Anyway, back to the real subject of the blog.

The fuel tank that I had wasn't only missing important bits of metal that should be keeping fuel in. it was also lacking the bit of metal that lets the fuel out. The original Ner-a-Car fuel tap is a bit odd, as it has a big circular flange that solders to the bottom of the fuel tank. I had a bit of a look around, but couldn't find one to buy, so I made one.

The first stage was to model the original in CAD, scaling from the original drawings. Then machine the shape out of a lump of brass using CNC. 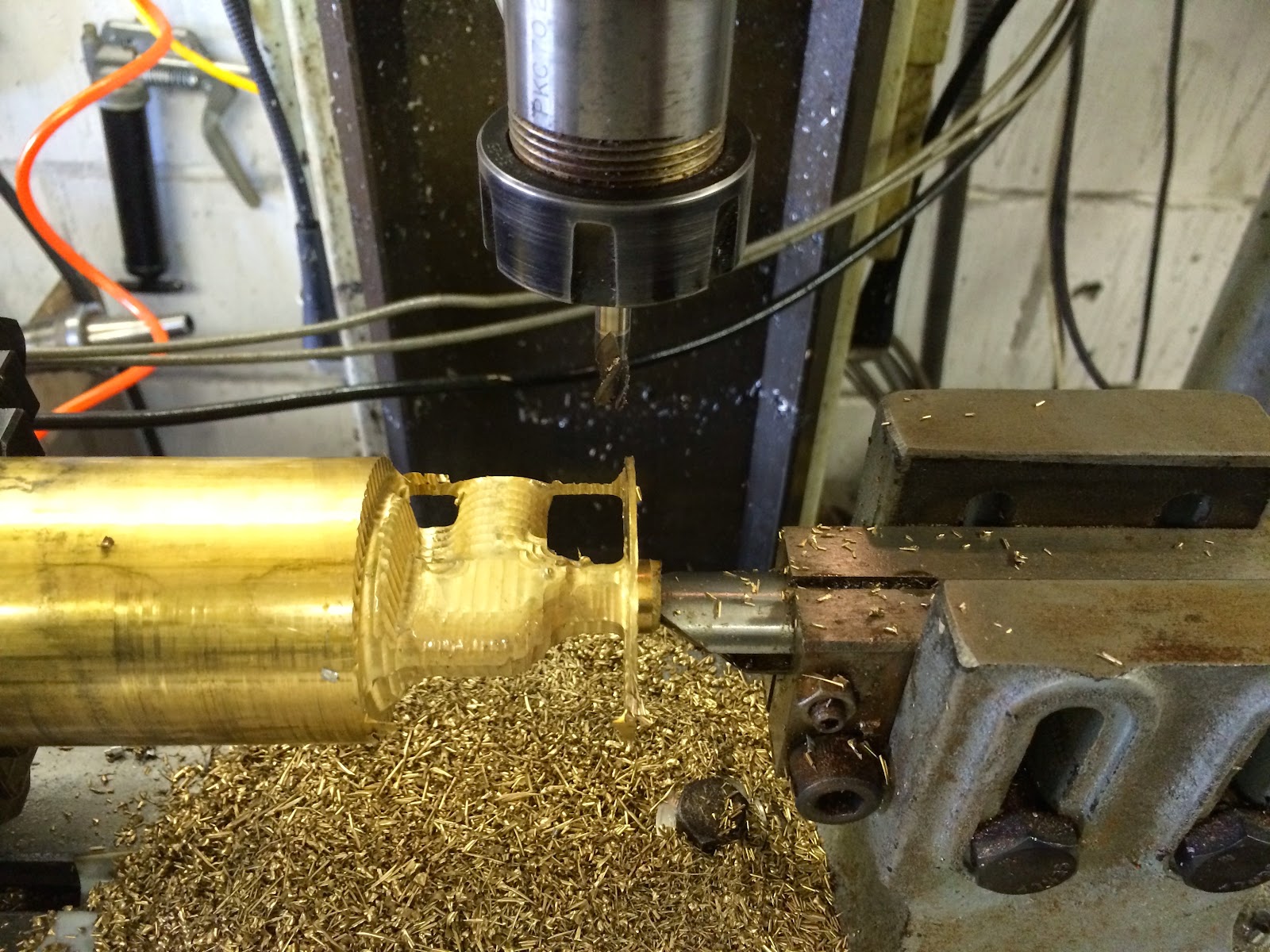 I then did some inverted-turning using my lovely Wohlhaupter boring head, and then used the same head and the G33.1 cycle to invert-turn a thread for the packing gland. 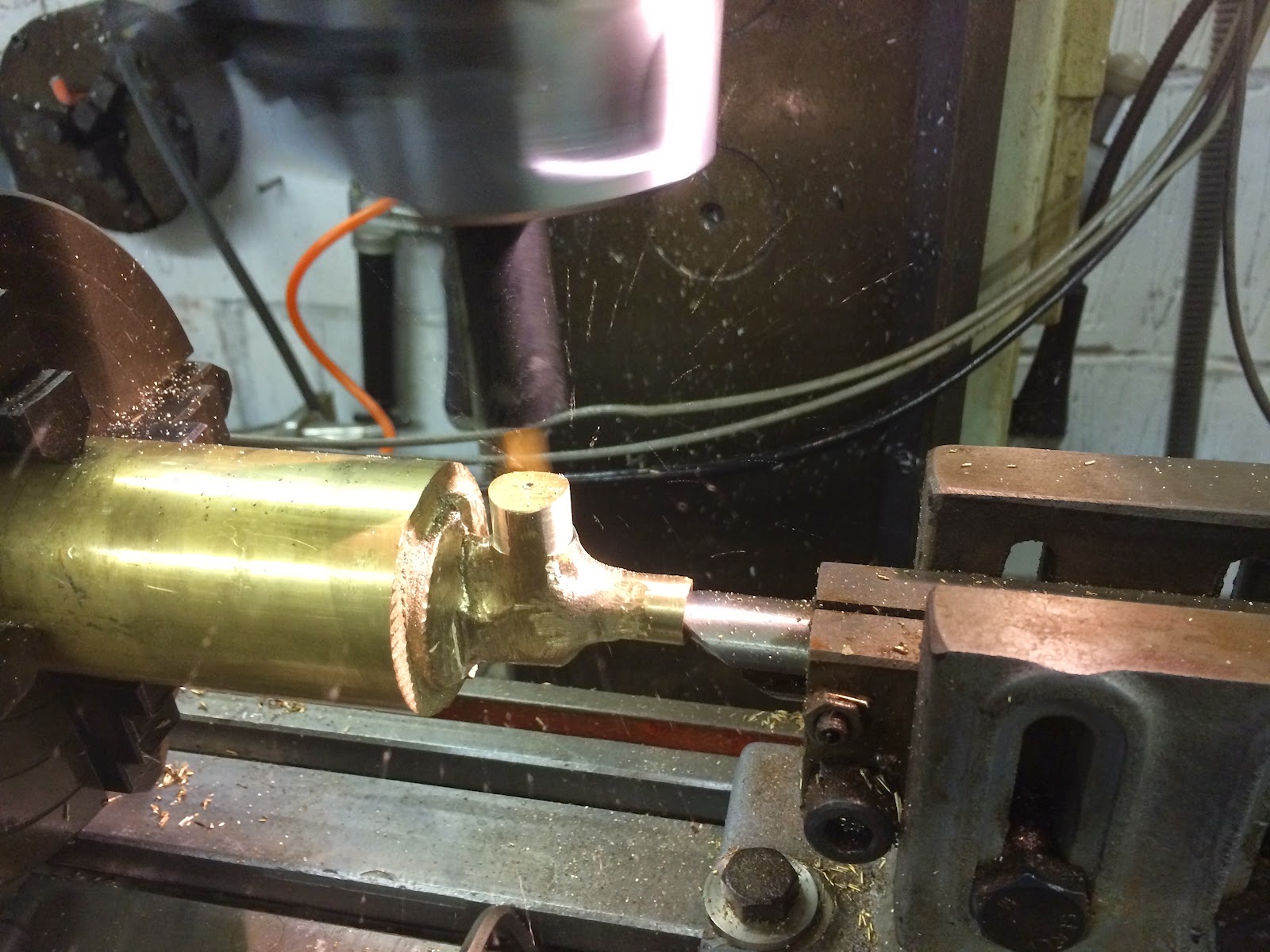 This didn't turn out to be the best thread I have ever made, so I cleaned it up with a die nut. I soldered it on with an attachment that I have for my blowtorch, originally bought for making some stained-glass windows. In fact the same (cat food) box is where the solder I am using came from. 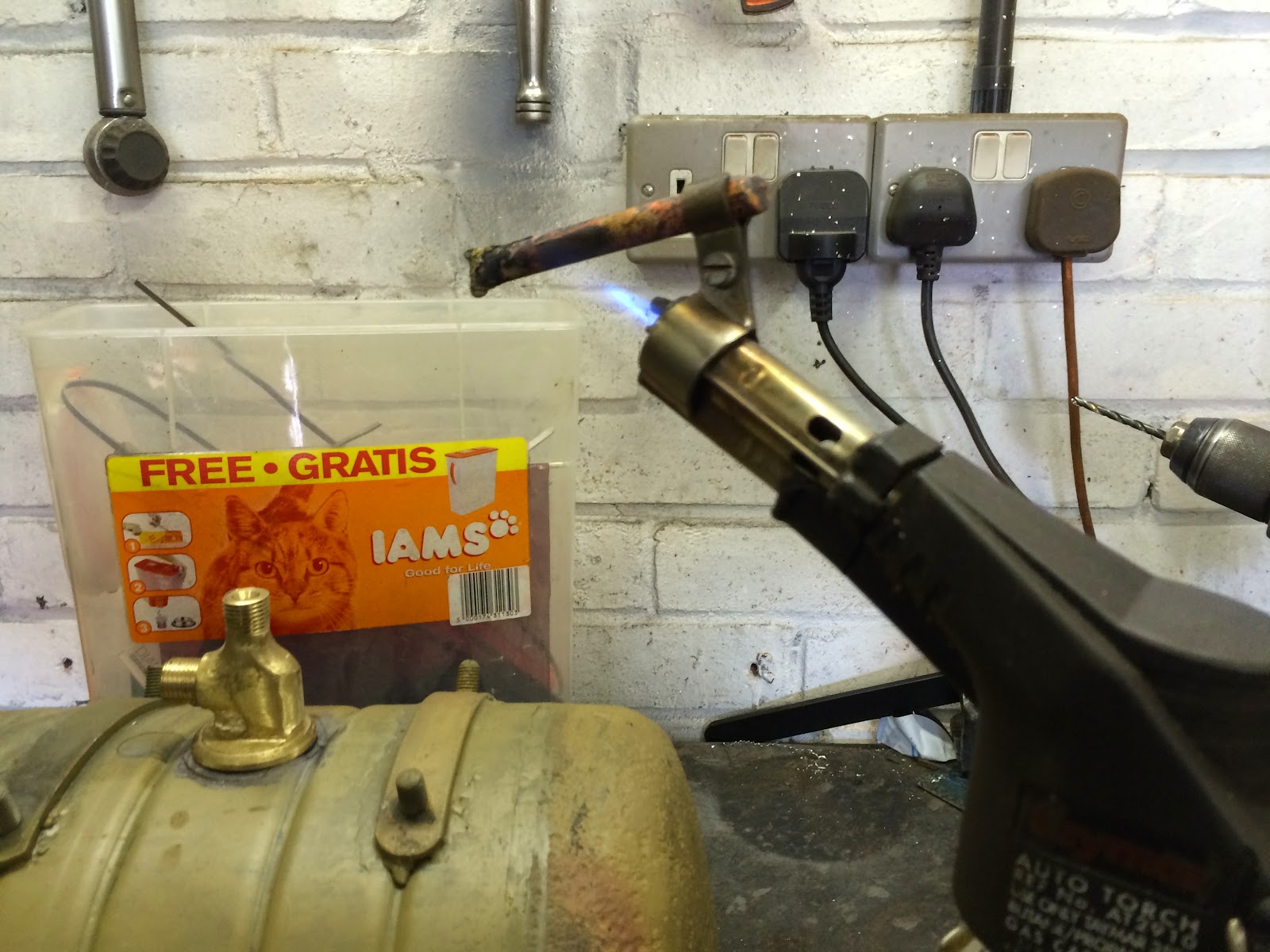 Here is the valve painted and with a set of unions from the Complete Automobilist.  I was a bit surprised to find that the plumbing and hydraulics shops I went to had no idea what I was on about when I asked for solder-nipples. Even after drawing diagrams. The picture shows a special short valve screw for purposes of marking the exit hole, because for some reason a previous owner had welded up the hole. 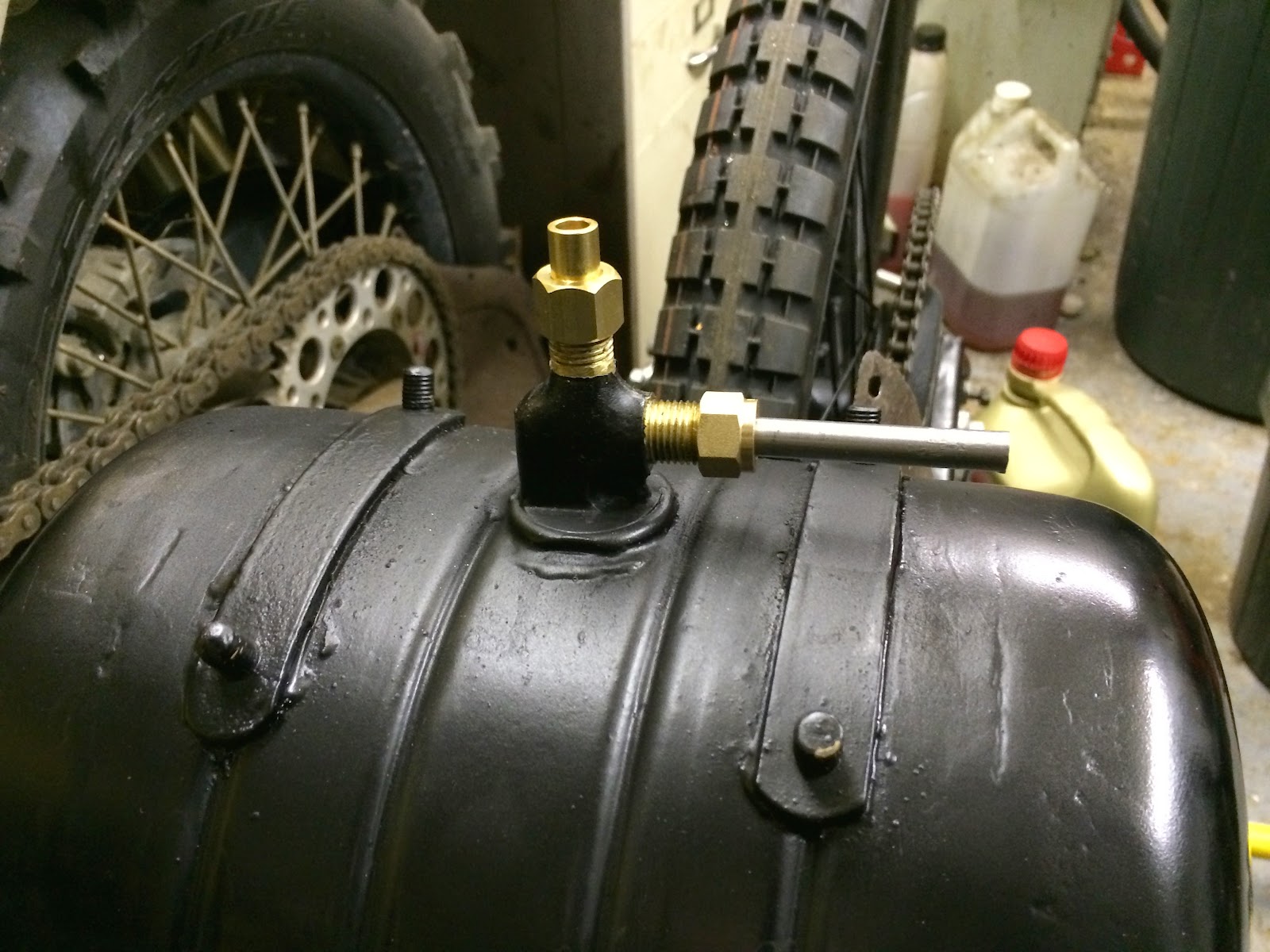 And here is the full-length valve screw with the handle solver-soldered in poking through the new hole. 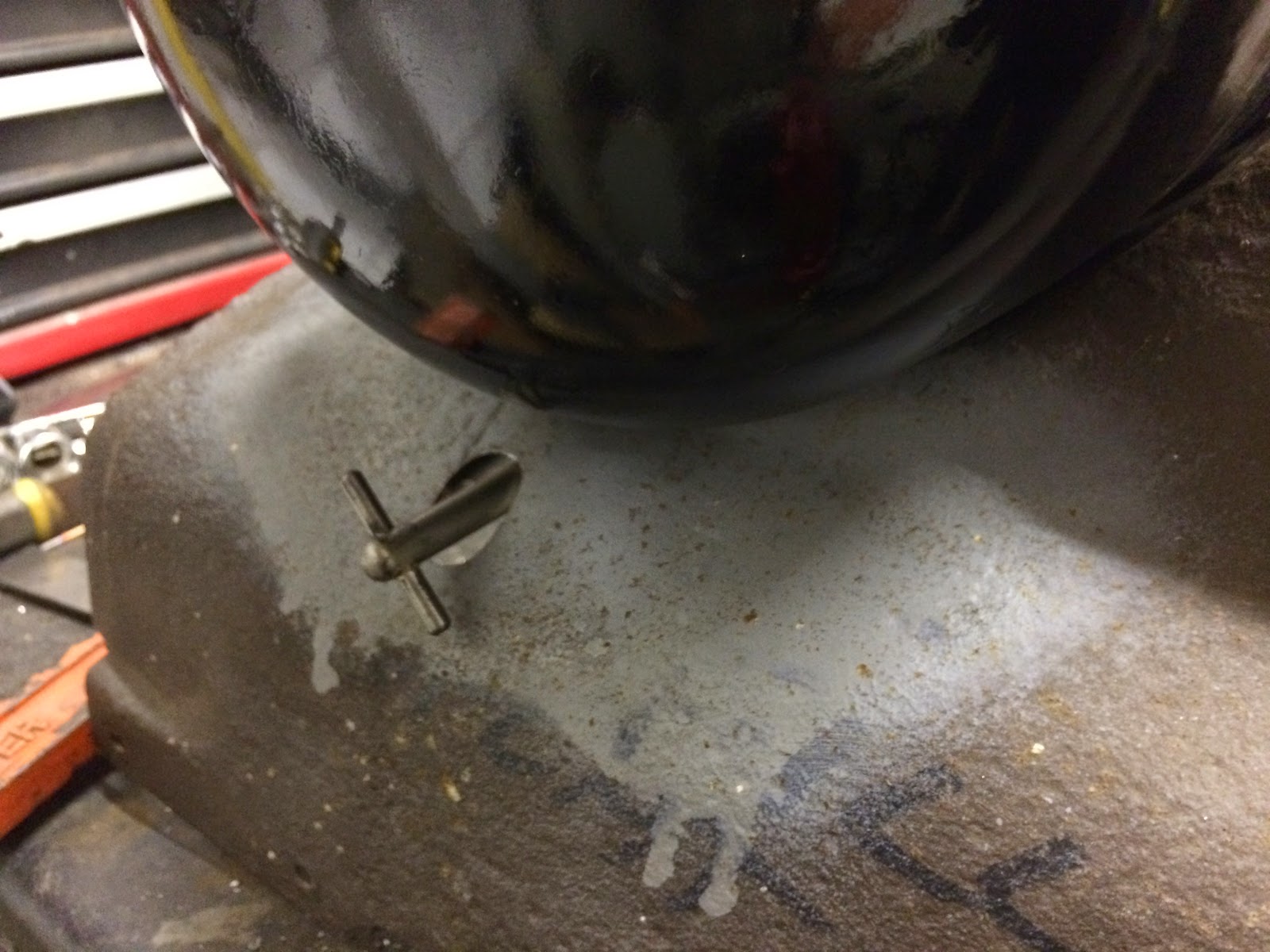 Carrying on downstream towards the carb I needed to make a new fuel line. I copied the routing shown in the original drawings, though I have never actually seen a real machine with the same routing. Rather annoyingly the union on the carb was not 1/4" BSP and a 60 degree union as I had guessed, it is a curiously fine thread (9/16" x 25 tpi) and a 12.5 degree union. You can buy these but I decided to just make them. The fuel line has a filter in it (rather than the filter being in the tank) and luckily you can buy these, but I had to make the outer body to hold it. 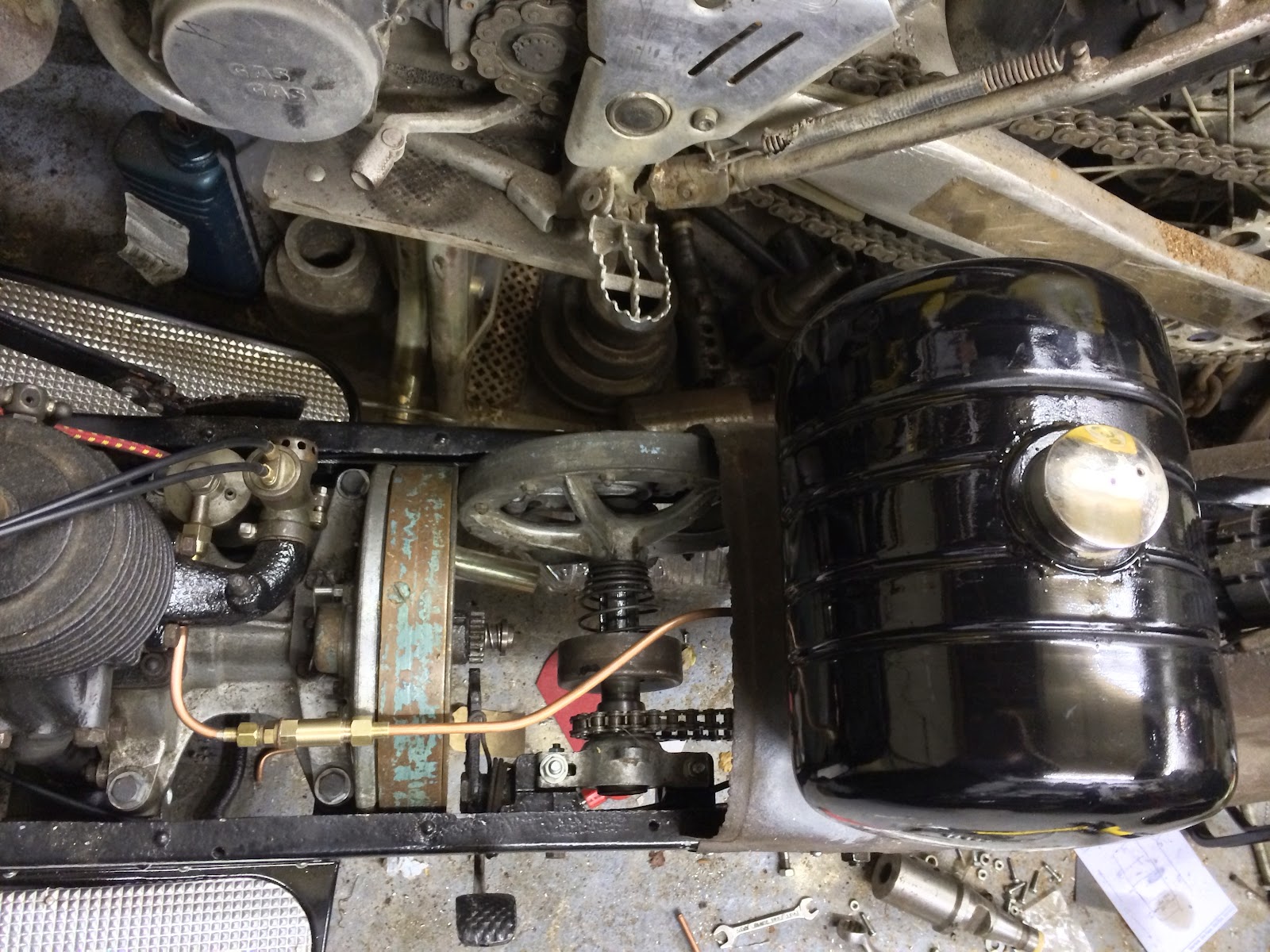 The left-side footboard I had came with the pedal and pedal bracket but not the foot pad. This was probably originally a forging, or maybe a casting. But for a one-off it is easier to just cnc mill it. So, again, I modelled it in CAD, then made a CNC program to carve the bottom, then the top 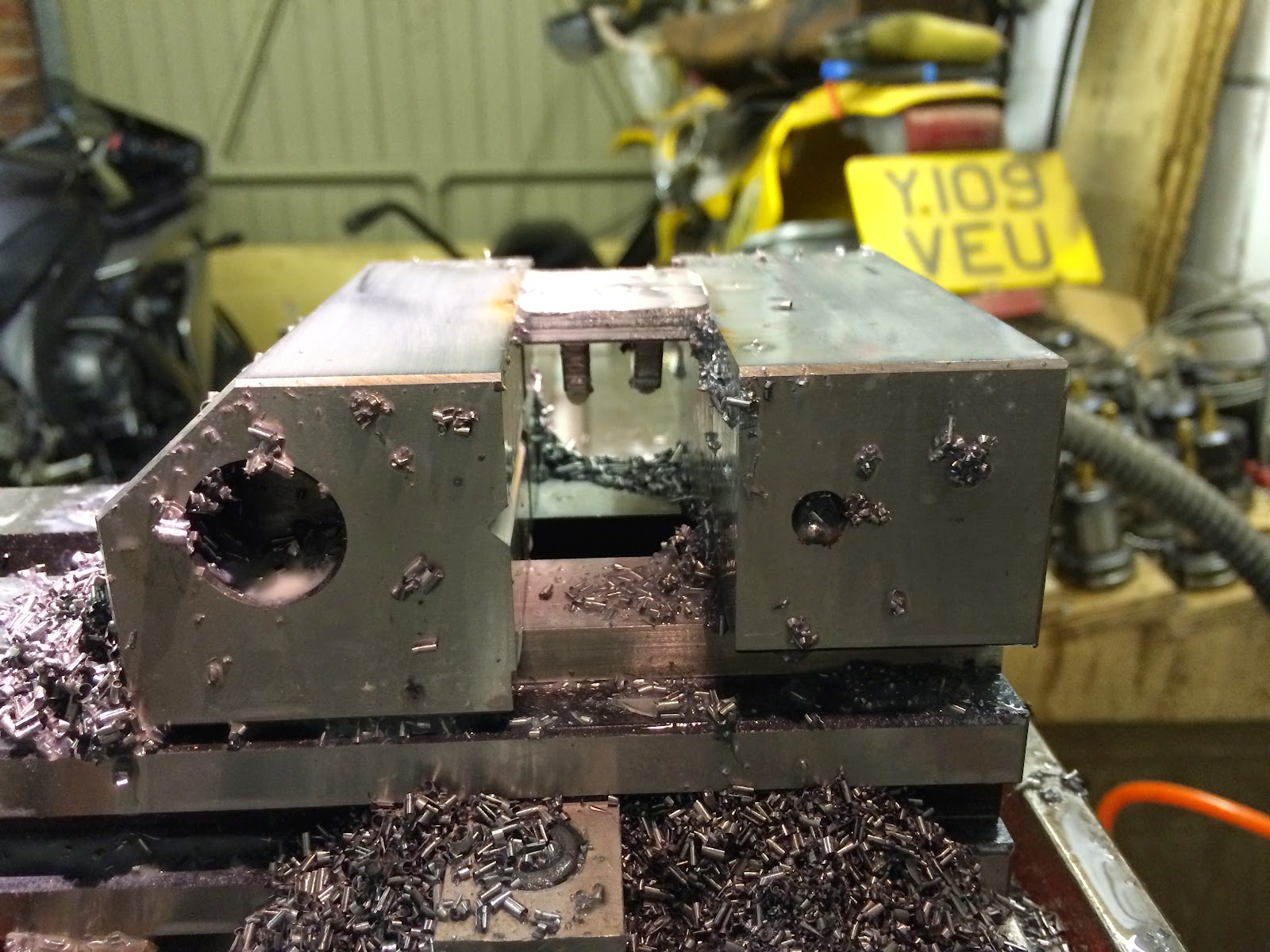 And then a third program to engrave the diamond grip pattern in the top. I am really rather pleased with how that came out. 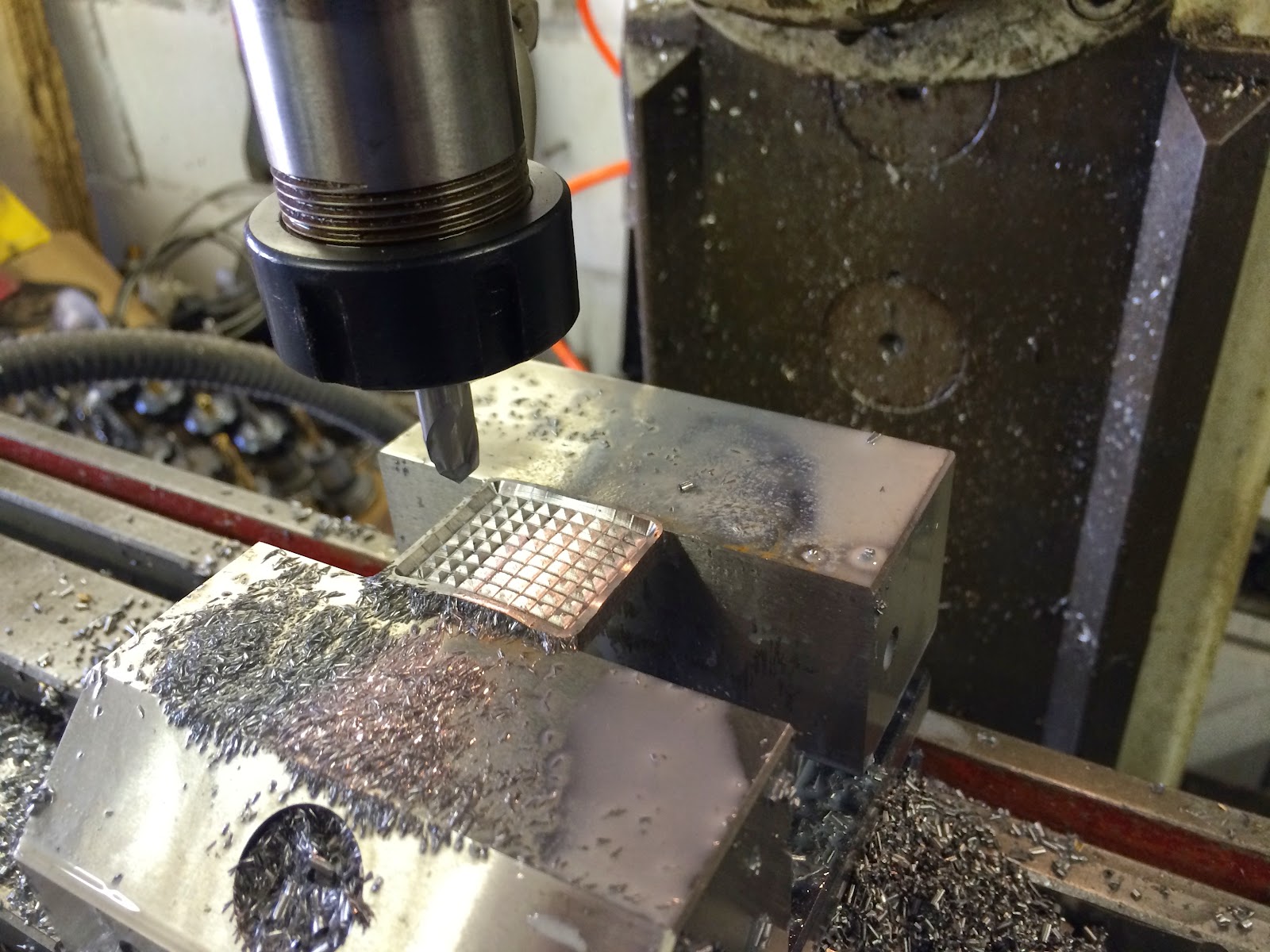 The pad attaches with a pin and a split-pin and then pulls a cable to operate the rear brake. I got the cable from B&Q and made brass nipples for each end which were silver soldered on. I bought a cable turnbuckle for the adjuster from a yacht chandlers rather than invest in a left-right pair of taps to make my own. This was crimped onto the cable using the crimper that I had previously re-purposed as a rivet squeezer. It worked a treat.
So, for the first time since I got it, the bike has the ability to stop.

Before I could fit the brake pad I needed to fit the footboard mats. I had previously obtained the correct pyramidal aluminium from Ben Geutskens. I needed a compass to draw the shapes onto a template, and ended up buying a set of mathematical instruments from Staples. I couldn't help myself after finding that exactly the same set was still on sale as those that I was given when I went to secondary school 35 years ago. 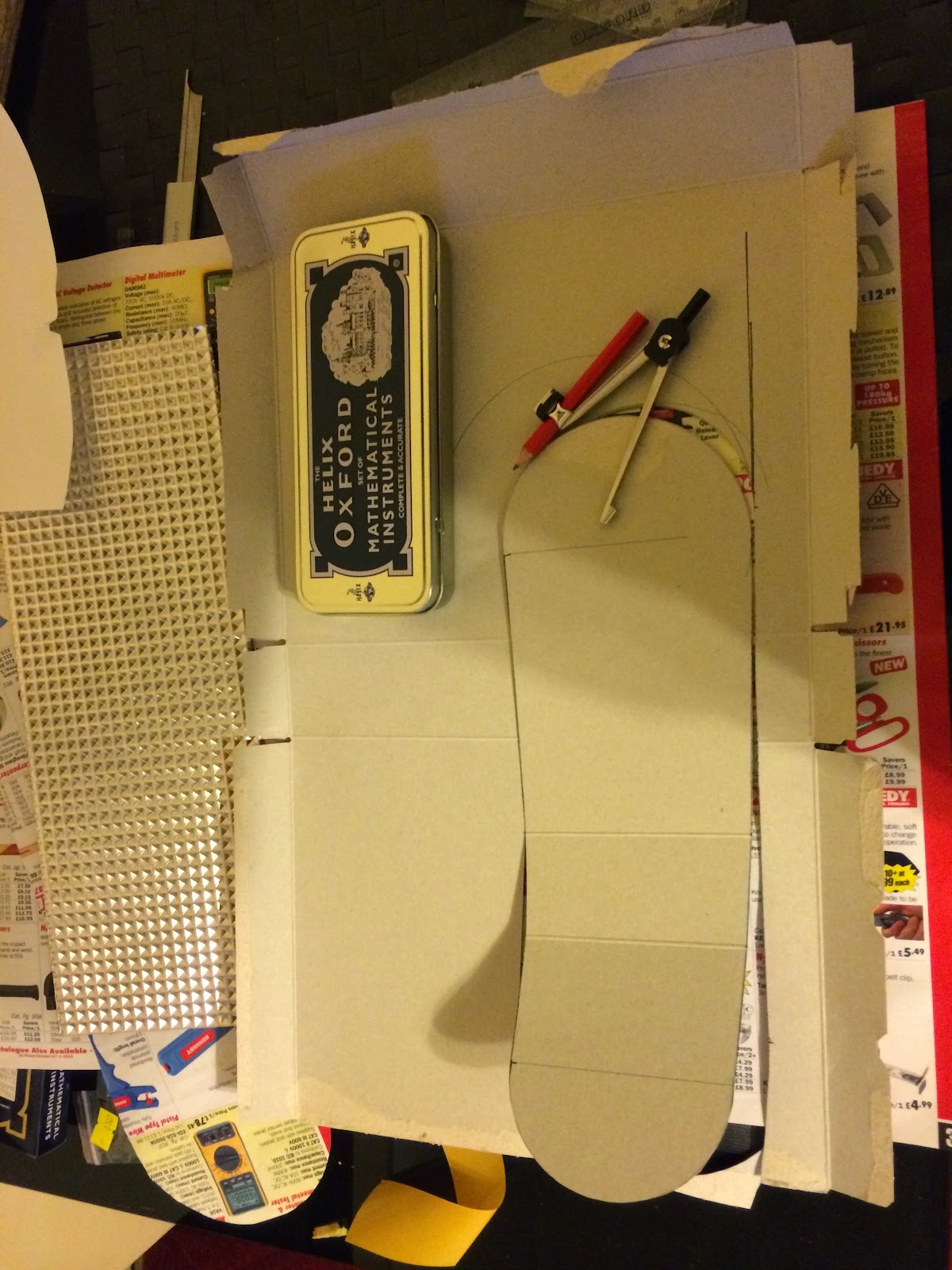 I cut out the shape using a really rather handy and inexpensive roller shear. It's a lot more useful than it ought to be for the price. It is much better at cutting curves than a conventional shear. The spec says that it will cut 1/16" and I have cut slightly thicker than that. It even made a start on some 2.5mm, but then stopped working and I found that the discs no longer met because I had distorted the frame. I managed to squeeze it back into shape again, though. 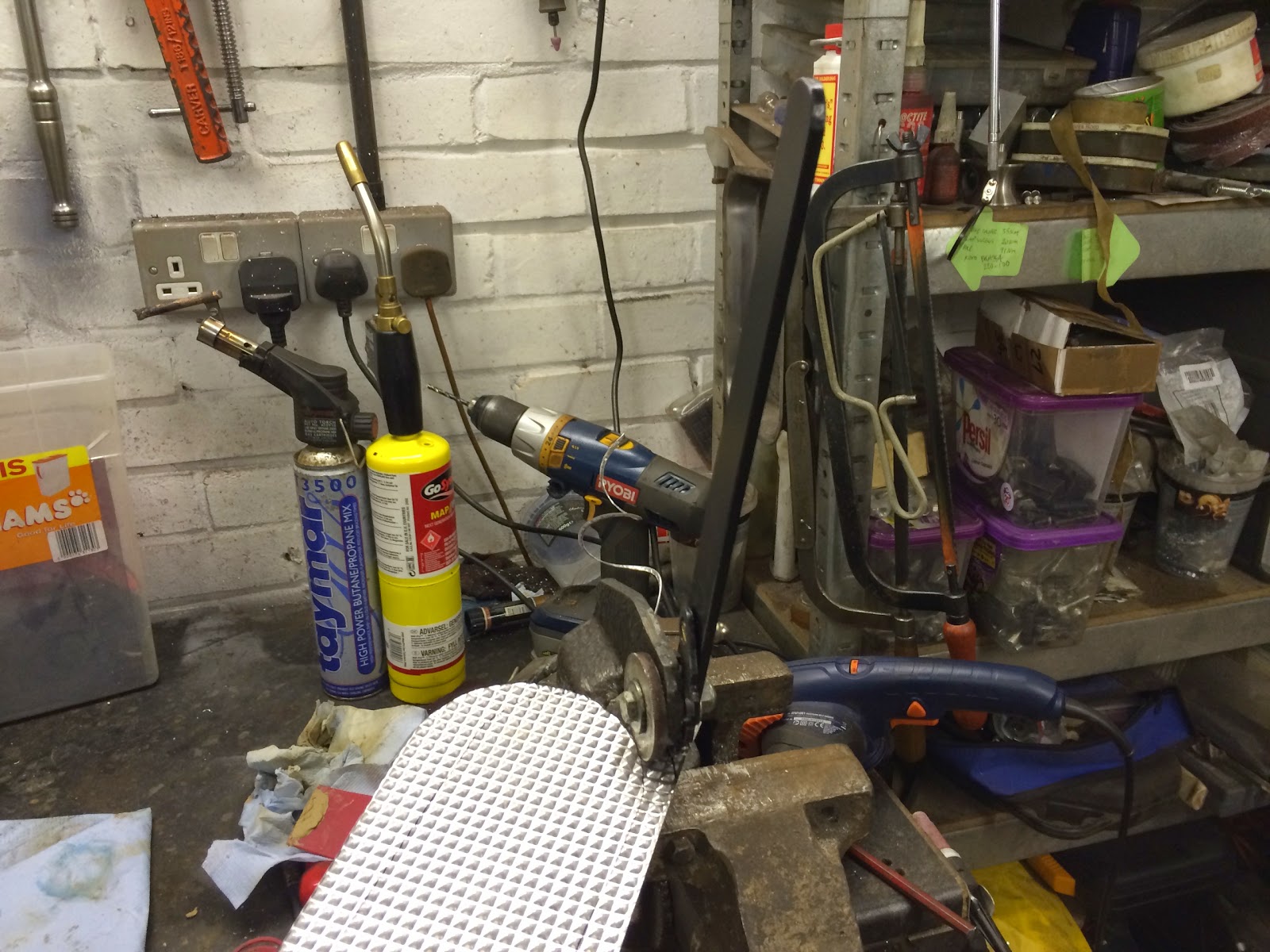 And finally, the mats are attached with split rivets (eBay) and the brake pad attached. 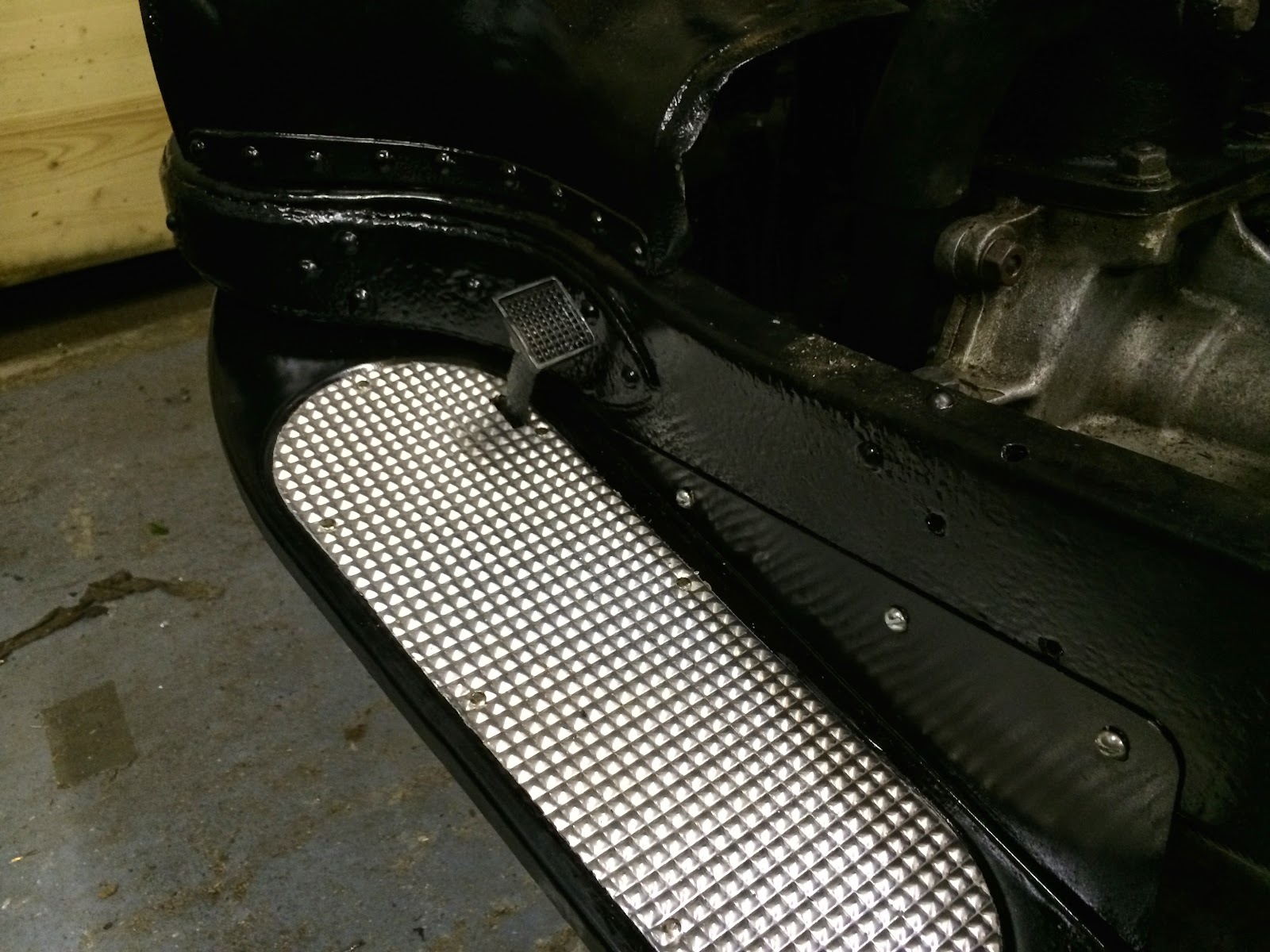 The Joys of Spring

The seat on the Ner-a-Car is suspended on a long leaf spring which is supported (bizarrely) by the filler cap at the front and by two tension springs at the rear.
I made the leaf spring out of a bit of ground flat O1 tool steel stock. It was readily available in the right size, and whilst not actually a spring steel as such, it should be possible to heat-treat it if it proves to be to weak in the current temper. A temper which I have rather spoiled by "blacksmithing" the eyes into the ends. If I get that sinking feeling as I ride down the road then I will have to look into making something to heat-treat it with as it is too big for a gas torch, or for my little charcoal forge.

The coil springs were the next challenge. These are a left-right pair, and are a little unusual in that they work in tension with a push-rod down the middle. You can buy spring wire in 1m lengths from eBay, but not at 1/4" diameter, and these springs contain a bit more than 2m of wire each too. I contacted a wire manufacturer (Fox Wire) who could not sell to me directly, but put me on to a retailer who could. (Stride Supplies) I found myself in the typical "minimum order" situation, so I ended up buying 20m of wire. I am sure it will come in handy for something.

The first task on each spring was to make the top eye. I ended up making a simple little bender for this: 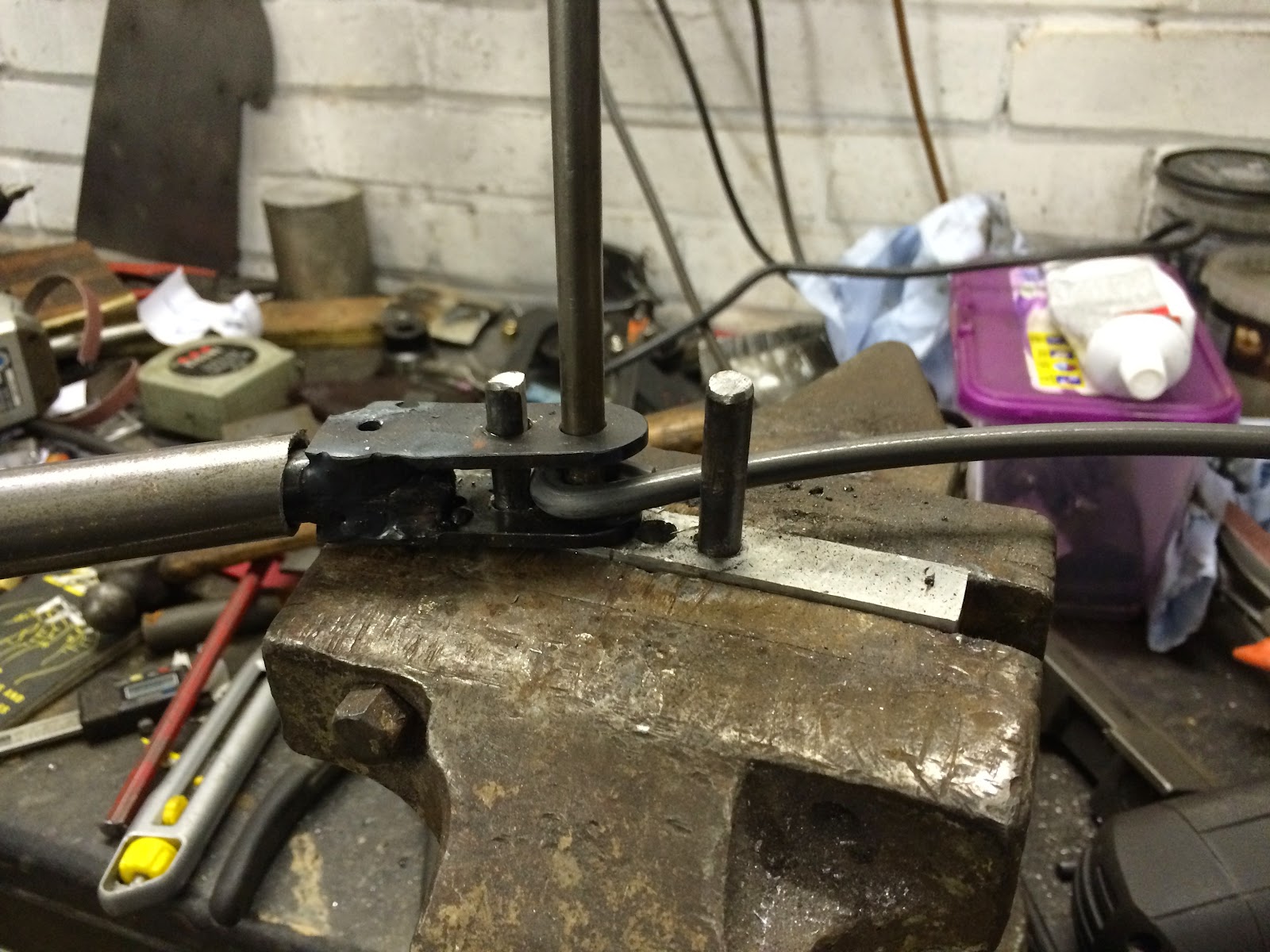 Then the next process was winding the coil. For this I used my milling machine in horizontal mode again. I never imagined that you could use one for so many things, or how grateful I would be for the 45rpm bottom speed range. (Though with the VFD I was actually running much more slowly still).

This is the winding rig in action. The reel of wire was so stiff and springy that I had no choice but to sit it on top of the mandrel, that was where it wanted to be, and I didn't really have the strength to argue with it. 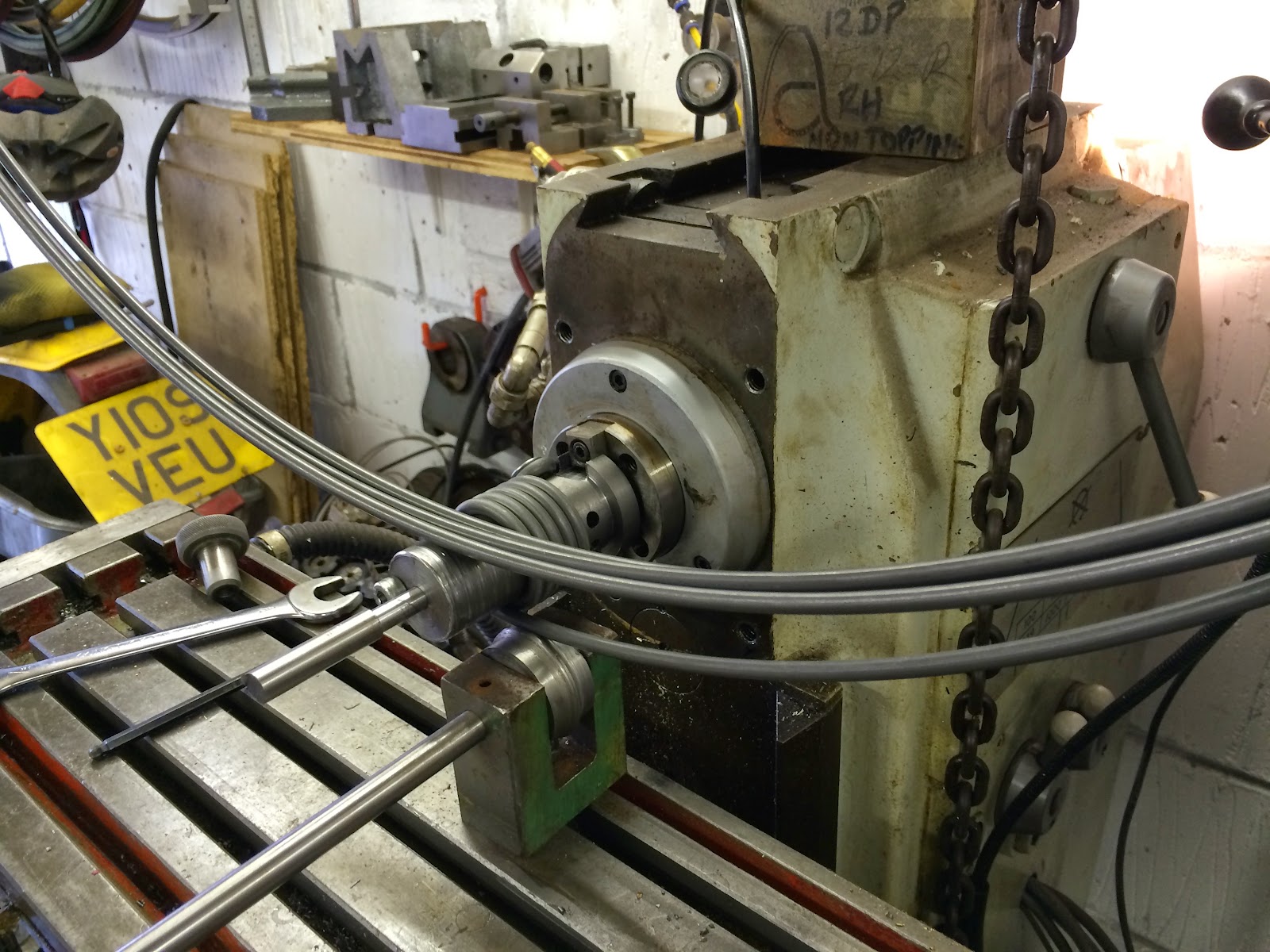 And here is a short YouTube video of the process.


The guide roller moves along synchronised to the spindle rotation by the magic of CNC (a G33 move). The idea of the bolt in the end of the mandrel is that that would make the final bend, then the little 3/8 mandrel in the end would make the bottom eye. The main winding process went well, but the bottom forming part went a lot better in my imagination than on the machine. I am sure it is something that could be set up to work perfectly every time with infinite wire and hundreds of spring to make. In the end I decided that I had one of each type "good enough" after some manual reworking after making 6 springs: 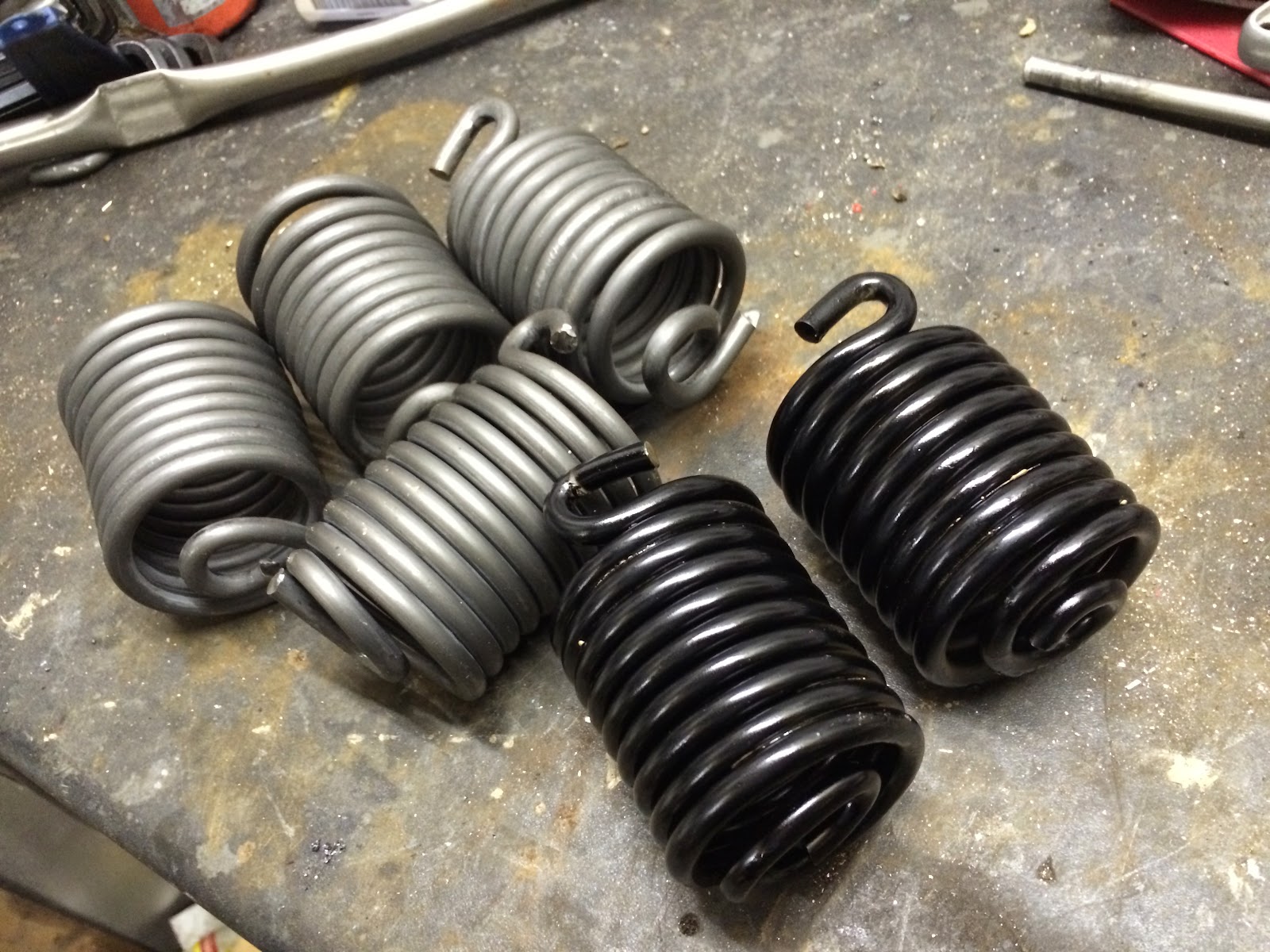 If anyone out there needs a pair of springs and is willing to do some re-working themselves, then my rejects are available to anyone who wants to ask.

A little bit of welding on the rear valance: 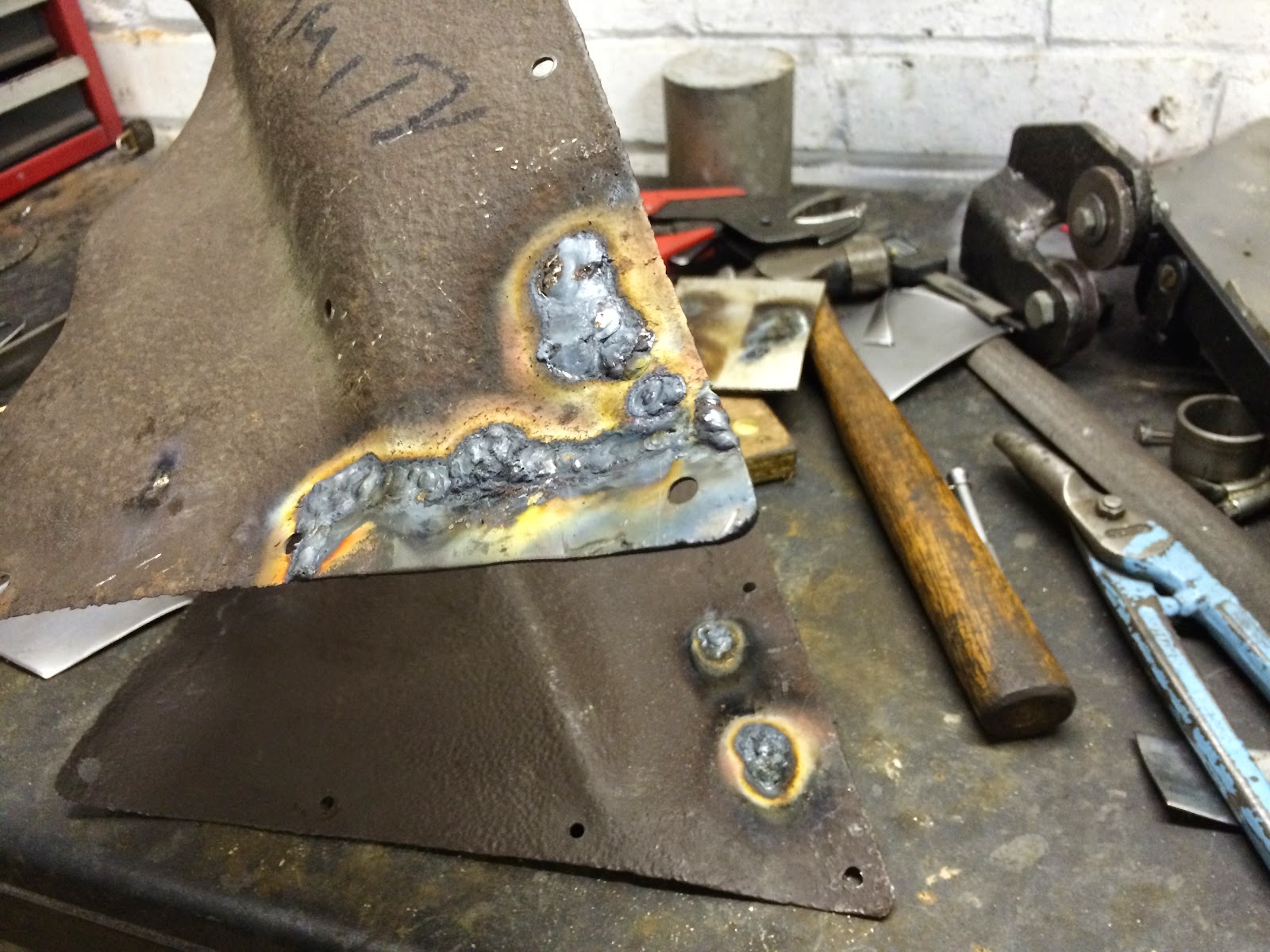 And then a lot of painting (no pictures) and many hours of assembly (including shortening 20+ 2BA screws) leaves the Ner-a-Car now looking like this. 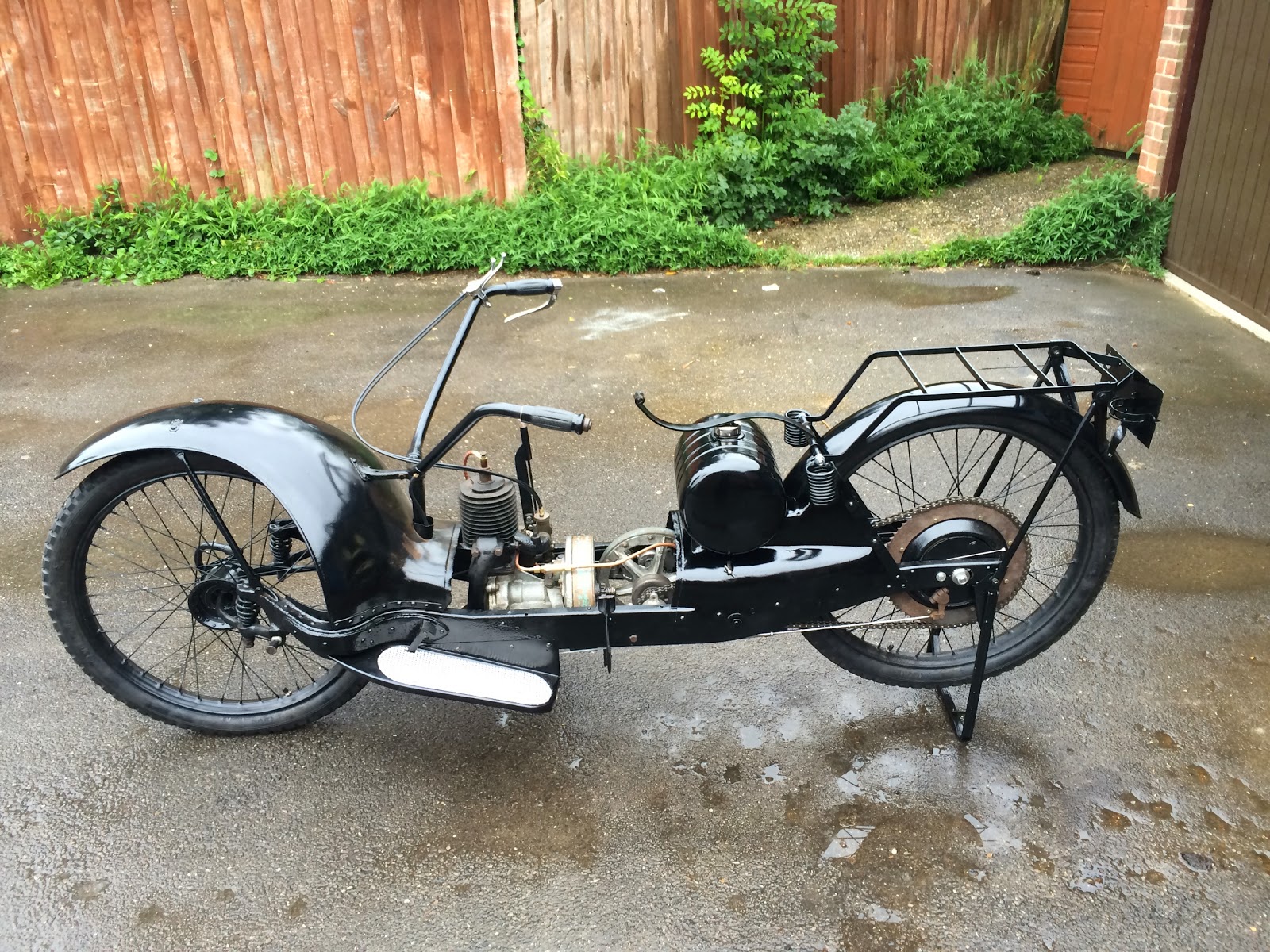 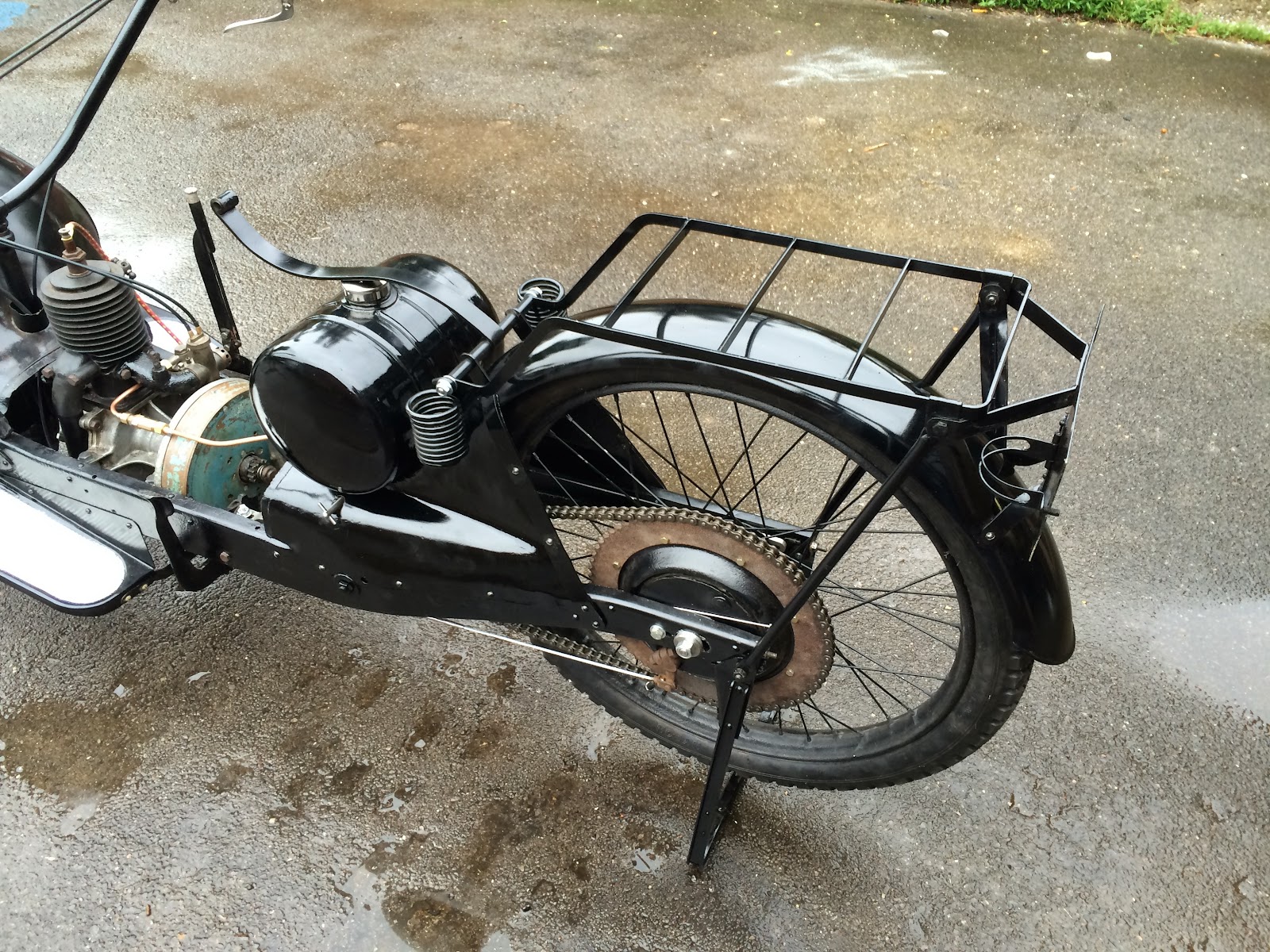 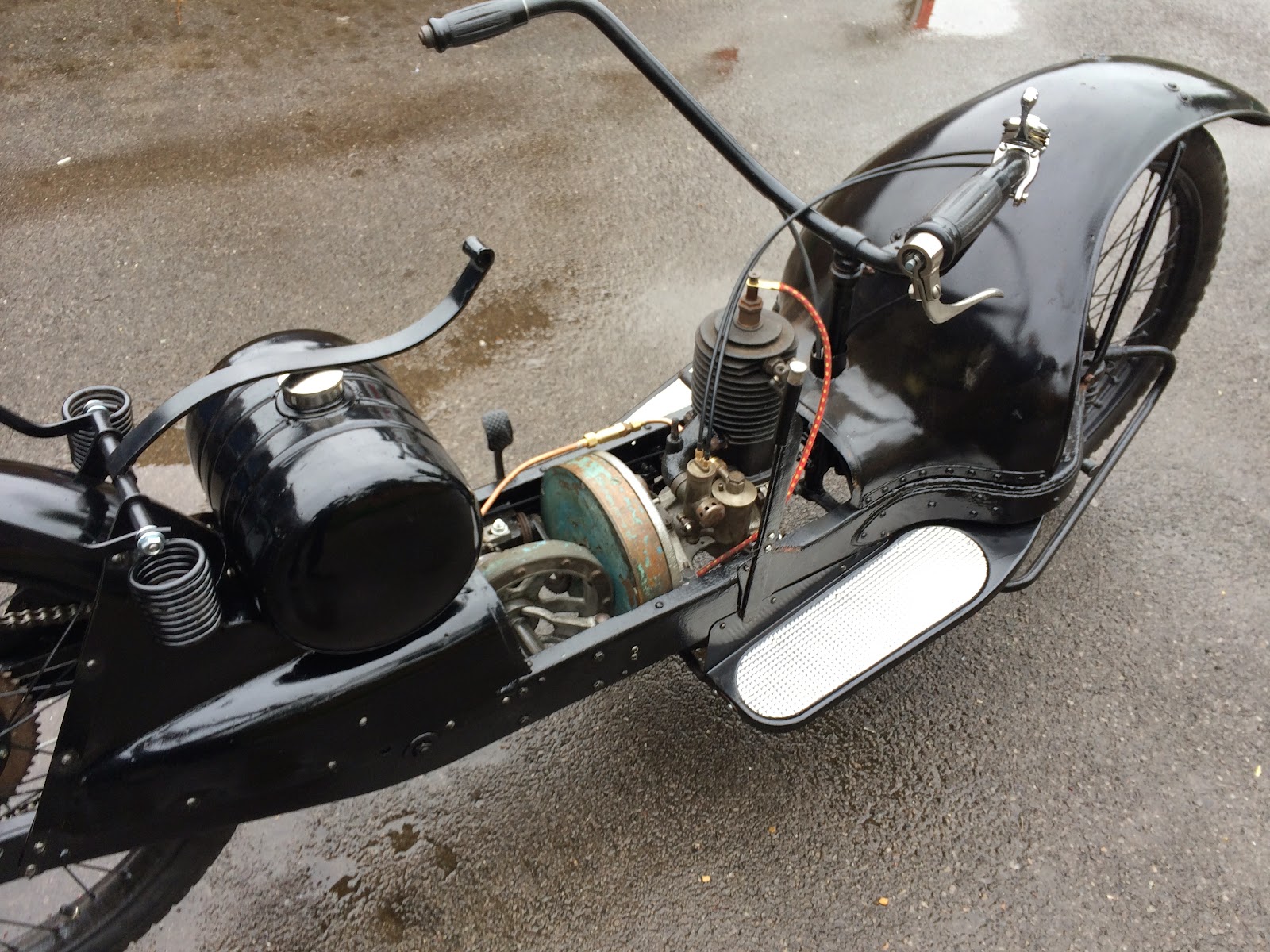 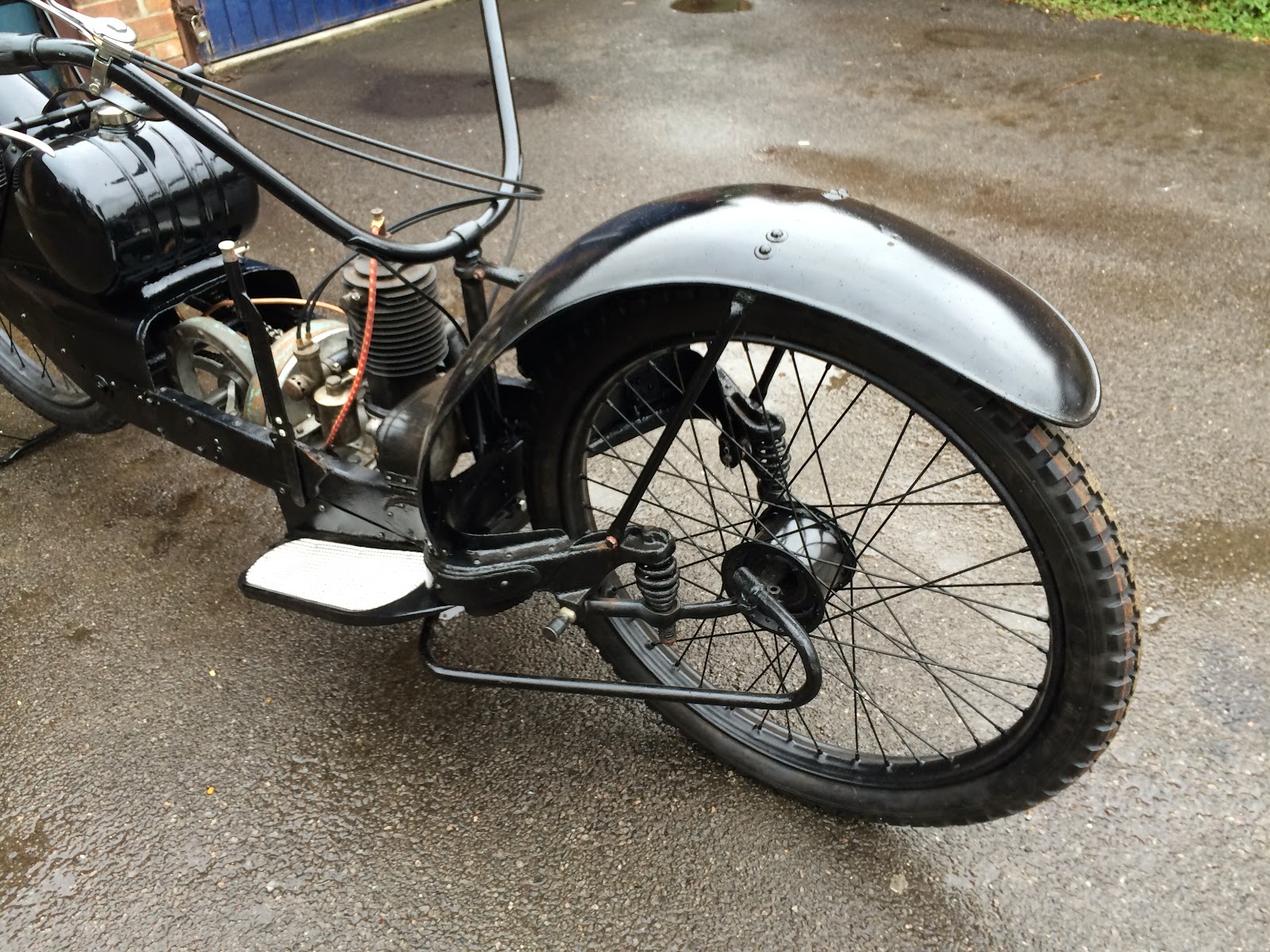 Yes, it really is very nearly finished. The eagle-eyed might notice one critical component that is conspicuously absent, and that is the seat. I was going to make one (despite not really wanting to be soaking, forming and sewing leather, at least partly as I am vegetarian) but then someone pointed out that Ner-a-Car used Mesinger and Gough's saddles interchangeably, and the the former are available as replicashttp://www.oldtimerservice.net.pl/seats_saddlebags.htm. So I decided to buy one of them, though the guys are really _very_ slow to reply to emails. There are other suppliers, including one chap in the US who was willing to supply, but I have been bitten by import fees enough times to know that it will cost about 40% more than quoted price to buy from the US so the Polish source looks more sensible.

The seat doesn't come with the Ner-a-Car specific mounting hardware, so I made that: 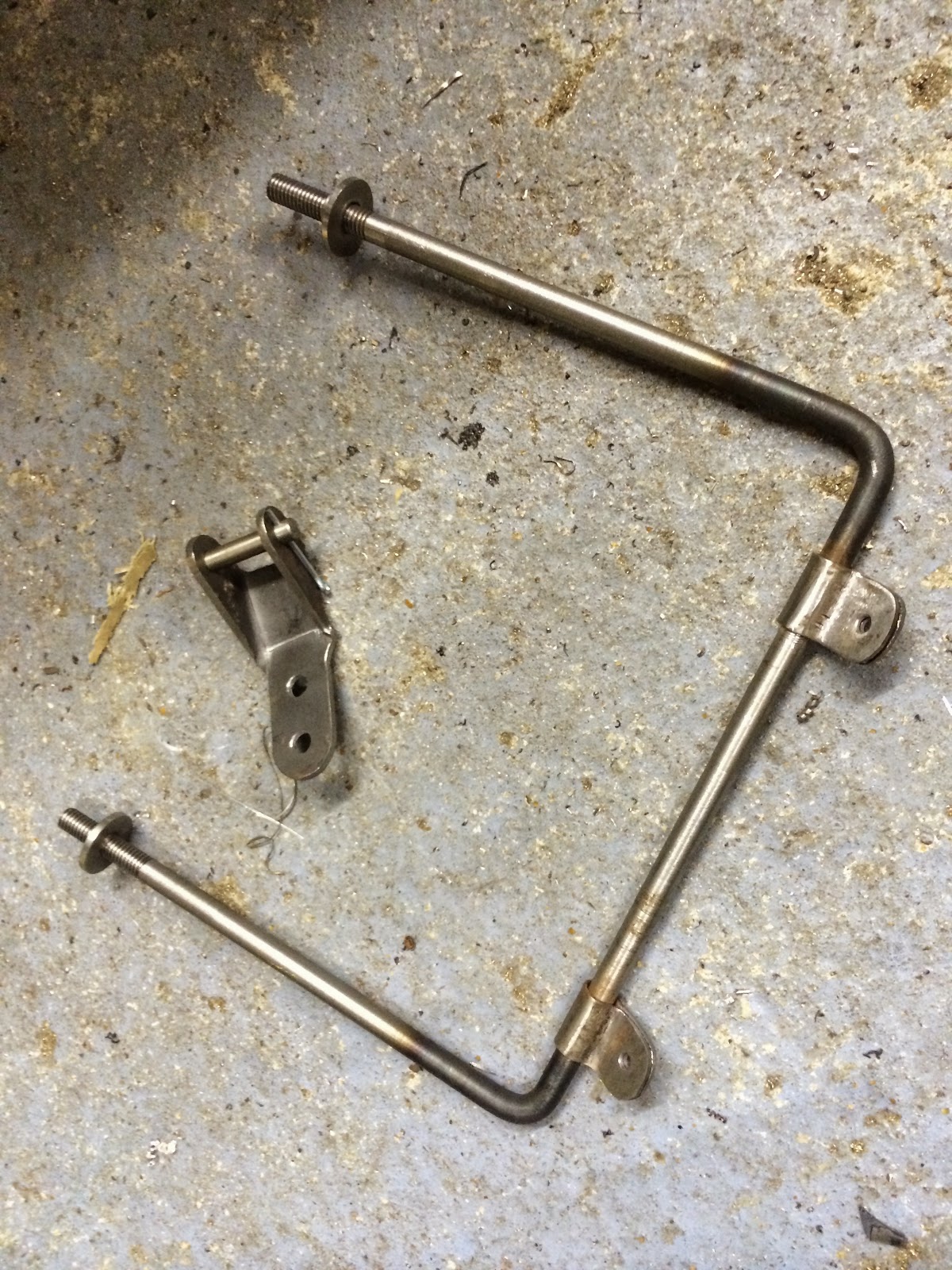 I didn't fancy waiting for the seat to arrive from Poland before the bike would be ridable,  so I made an improvised seat so that I can at least see if the bike works. You might have heard of bikes seats being metaphorically compared to planks of wood, well this one really is: 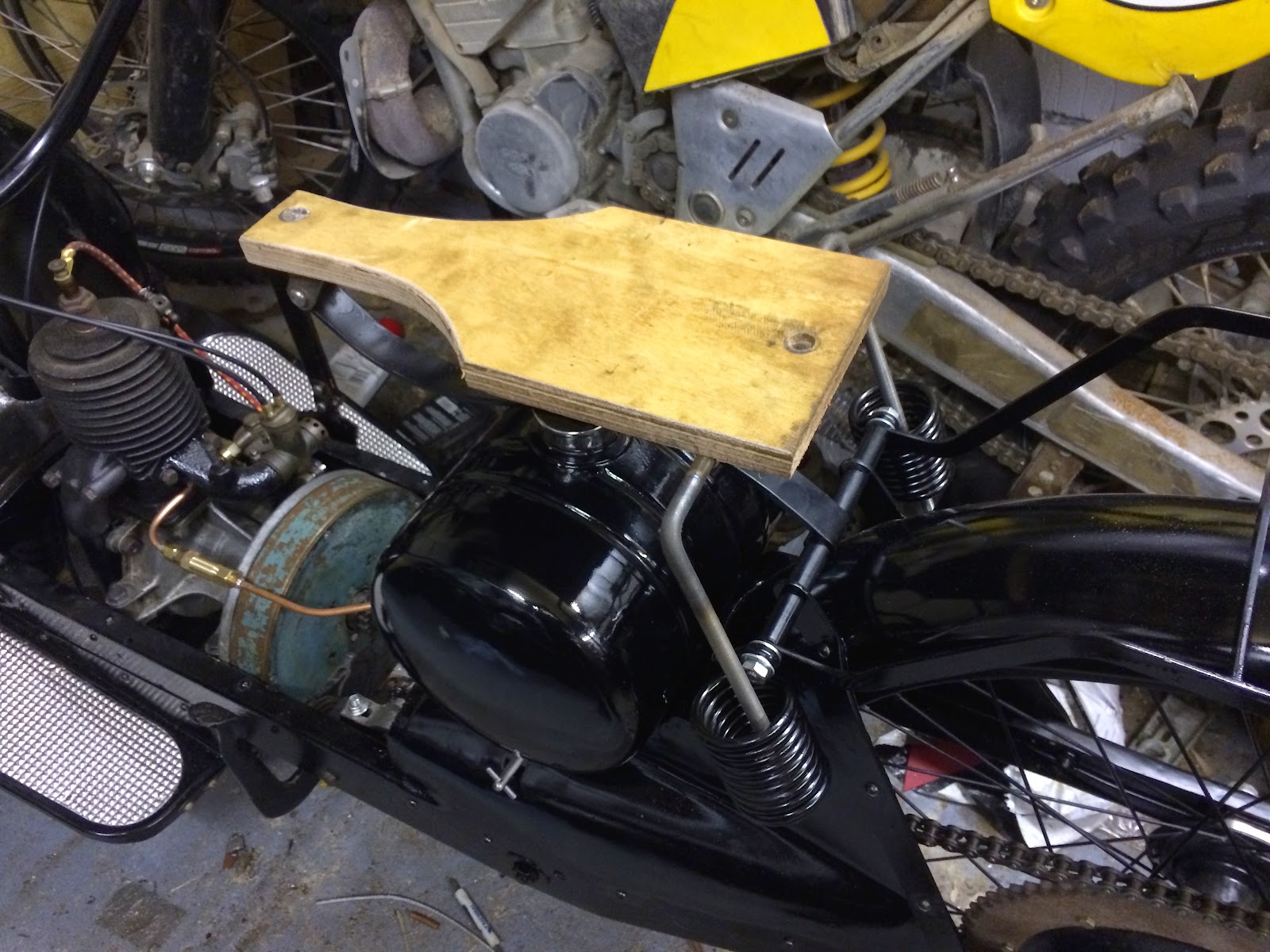 I was hoping to ride the bike for the first time today, but it has been raining heavily all day, shows no signs of stopping, and it was dark by the time I reached the stage of screwing the "seat" on.

It shouldn't be long now, though. The list of outstanding jobs is:
Transmission brake
Engine cover
Under cover
Headlights
Light switch.

None of which (except maybe the second brake) are 100% necessary. What is really holding me back at the moment is the paperwork required to get the machine registered.