Shortly after the last instalment I actually got the bike working :-)

I wanted to capture the moment on camera, but there was so much faffing about involved that the SD card in the camera filled up.
I found that the engine would run for about 6 firing strokes then foul the plug. In fact there were droplets of fuel bridging the contacts on the plug (a pretty Lodge CV Detachable). After much looking at things, and thinking about float heights I eventually tried the other plug (NGK AB-6) and the bike fired and ran first kick.

So, here is a dramatical reconstruction of the first running of the bike, with the tedious messing about removed for the modern audience.

It has been commented by at least one person that they would like a more detailed description of some of the processes, rather than just "I made one of these". So I am going to describe in rather more detail the manufacture of a single part.
The Ner-a-Car Model A has two brakes. The foot brake operates a conventional drum brake in the rear wheel. But the hand brake, on the right handlebar, operates an external contracting band brake on the transmission shaft. This is rather unusual for a motorcycle, but was fairly common automobile and truck practice. The brake is mounted, rather strangely, on the side of the front chain guard. The chain guard is moderately important as it prevents chain lubricant getting on the friction disc of the flywheel. I suppose this is clever. If the chain guard falls off, then the brake falls off, so you can't stop, but you can't go either.

I started with the bracket that connects the chain guard to the bearing housing. I basically did this by eye, cutting a rectangle of metal out, bending down the mounting tab, then drawing an outline with paint-pen and cutting it out with a hacksaw and files. 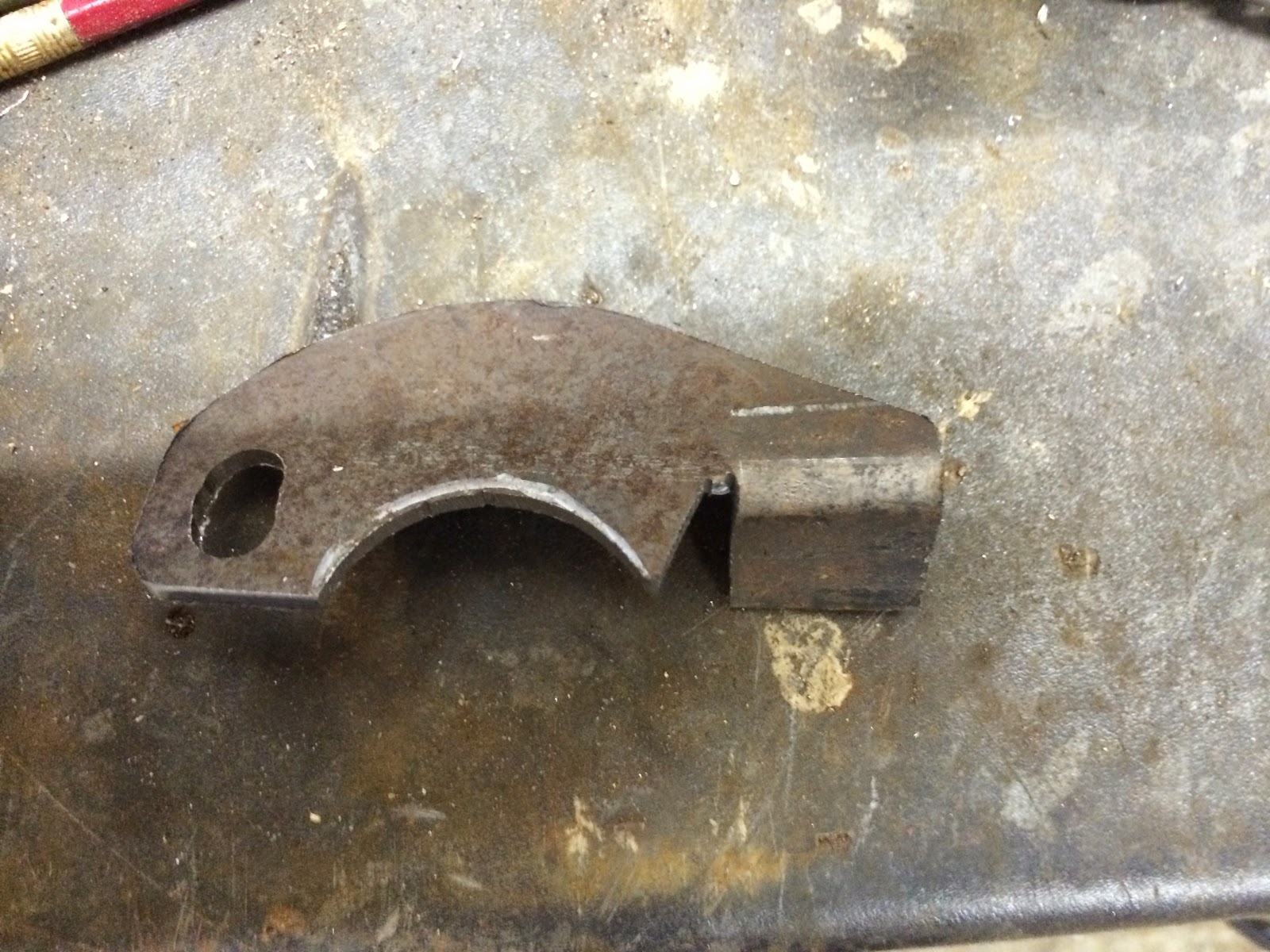 Next came the brake band itself. I cut a 1" wide strip of 16-gauge 12" long with the rotary shear mentioned earlier, and then bent it round a former by hand. The picture below just shows how to set up a strip and former in a vice to make a curve. You can do multiple turns this way, if you really have to. 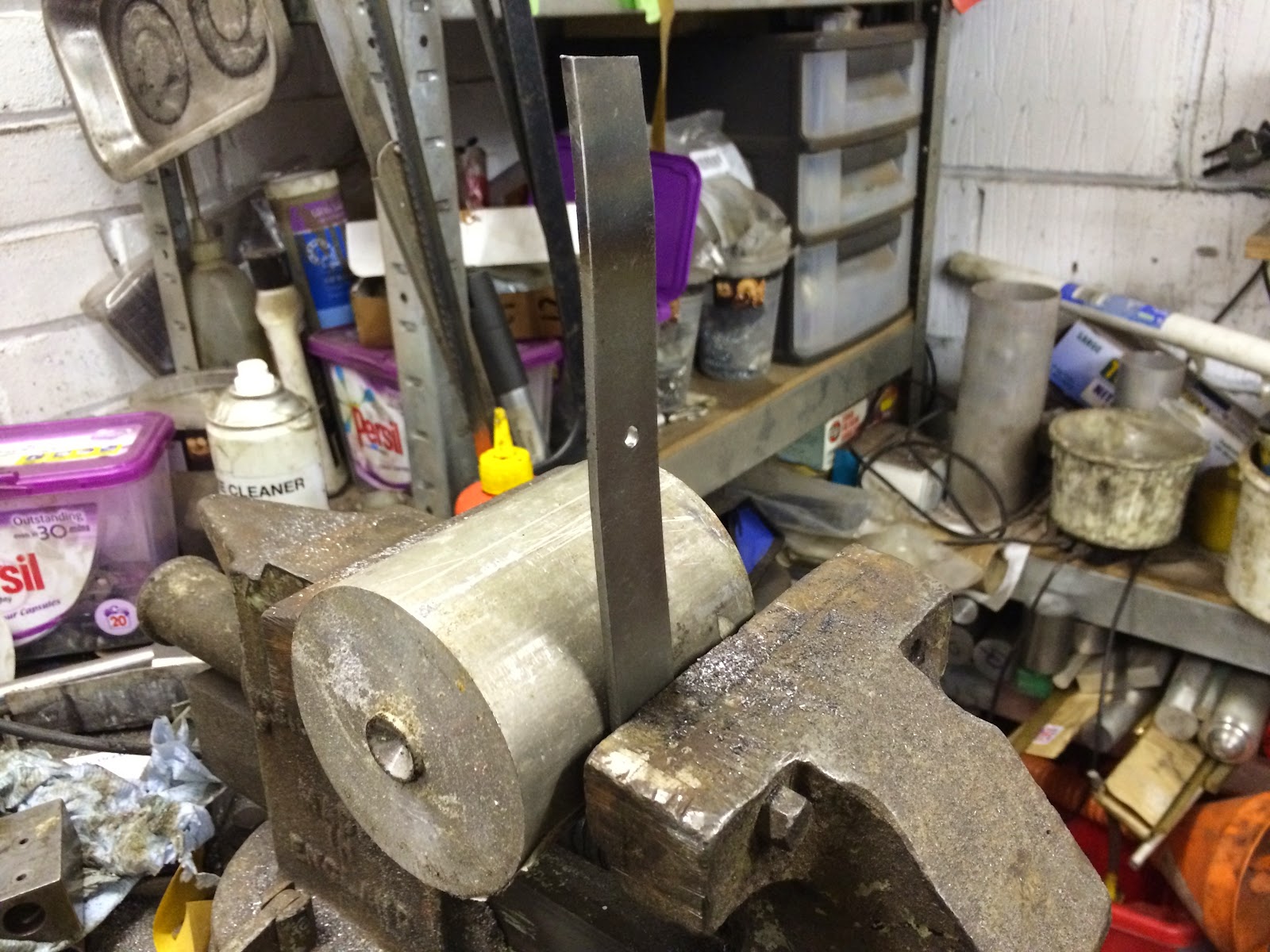 The material being bent here isn't the brake-band at all, this is part of the end casting pieces for the brake band, parts 435 and 436. Two short curved pieces were cut out and a couple of cylindrical parts machined on the lathe. One threaded for an adjuster and one just drilled for the nipple. At this point they were left as complete rings, the slot for the cable was cut after welding. I filed a slot in the little plates with a round file to get the bits to sit at the correct angle, then welded them on. (TIG) 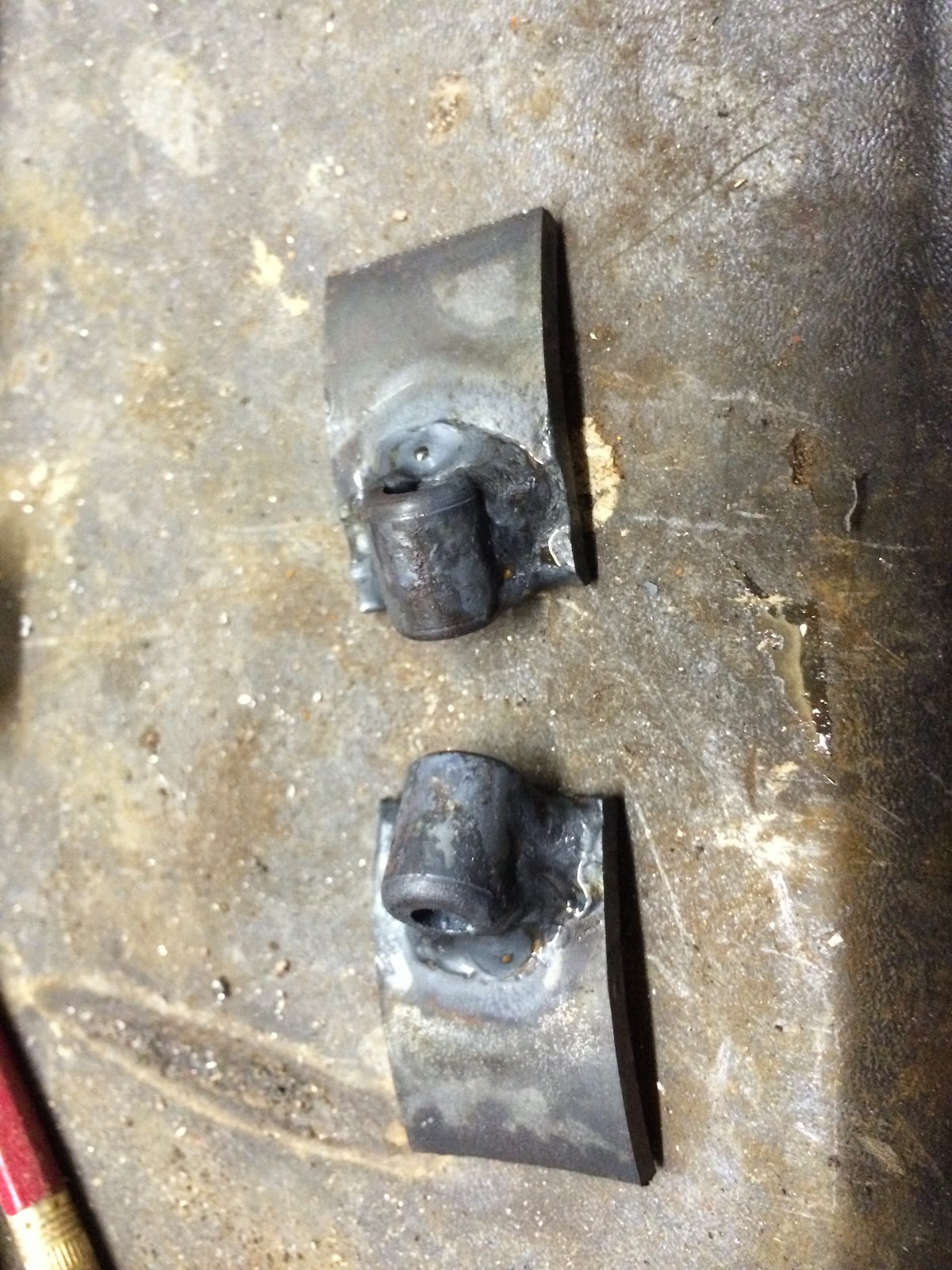 A bit of filing and grinding had them looking quite a lot like the original parts. The slot for the brake cable was cut by putting two blades side-by-side in the same hacksaw frame to cut a double-width slot.
I then rivetted the parts together with the rivet squeezer: 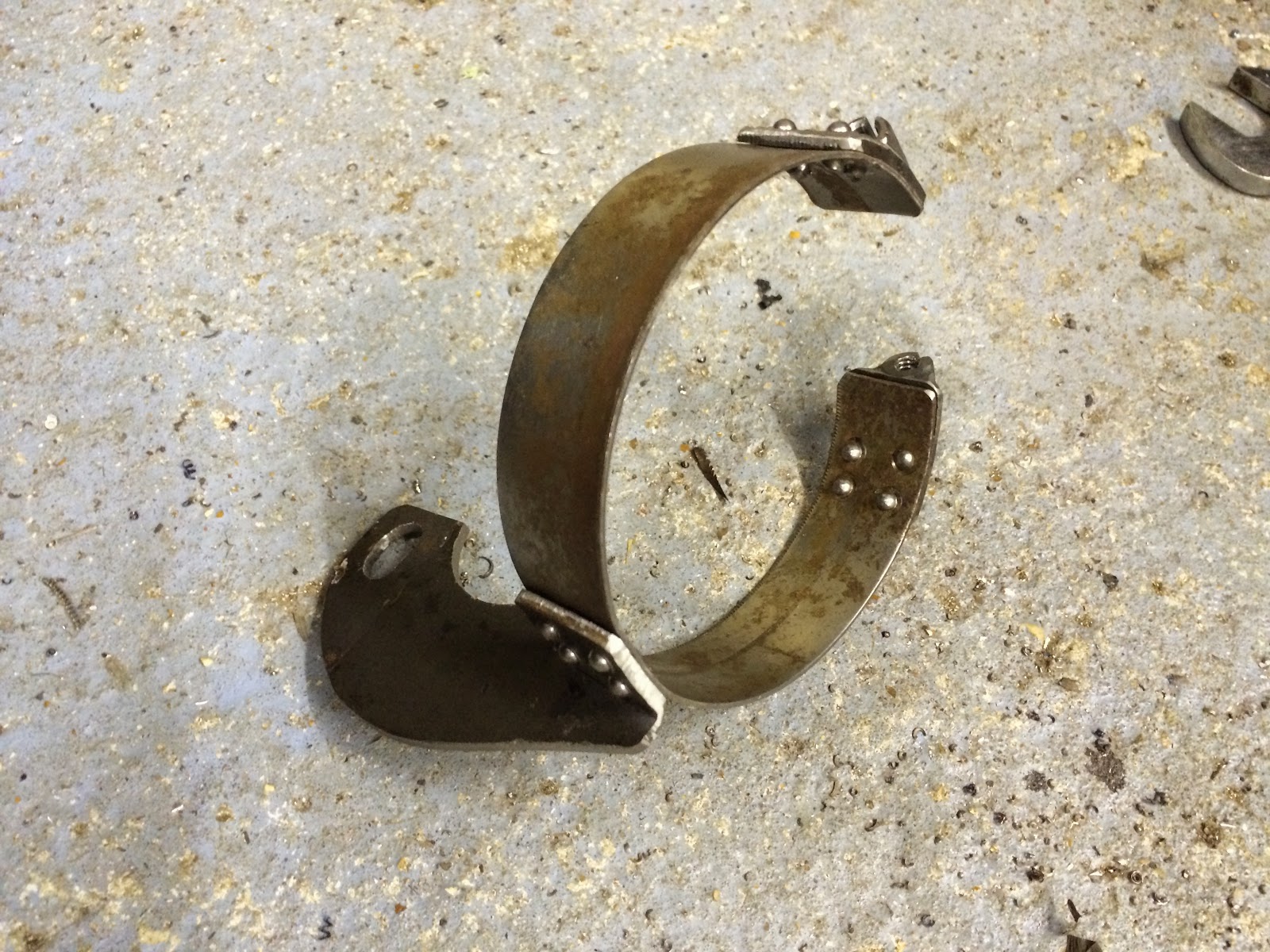 Then came a trial-fit to make sure it all looked plausible. The adjuster was a fairly straightforward bit of lathe work. The hex wasn't machined in this case because I forgot to do it before cutting the thread and then had no easy way to hold it. So I made it by simply copying the locking nut flats with my electric belt sander/file thingy. 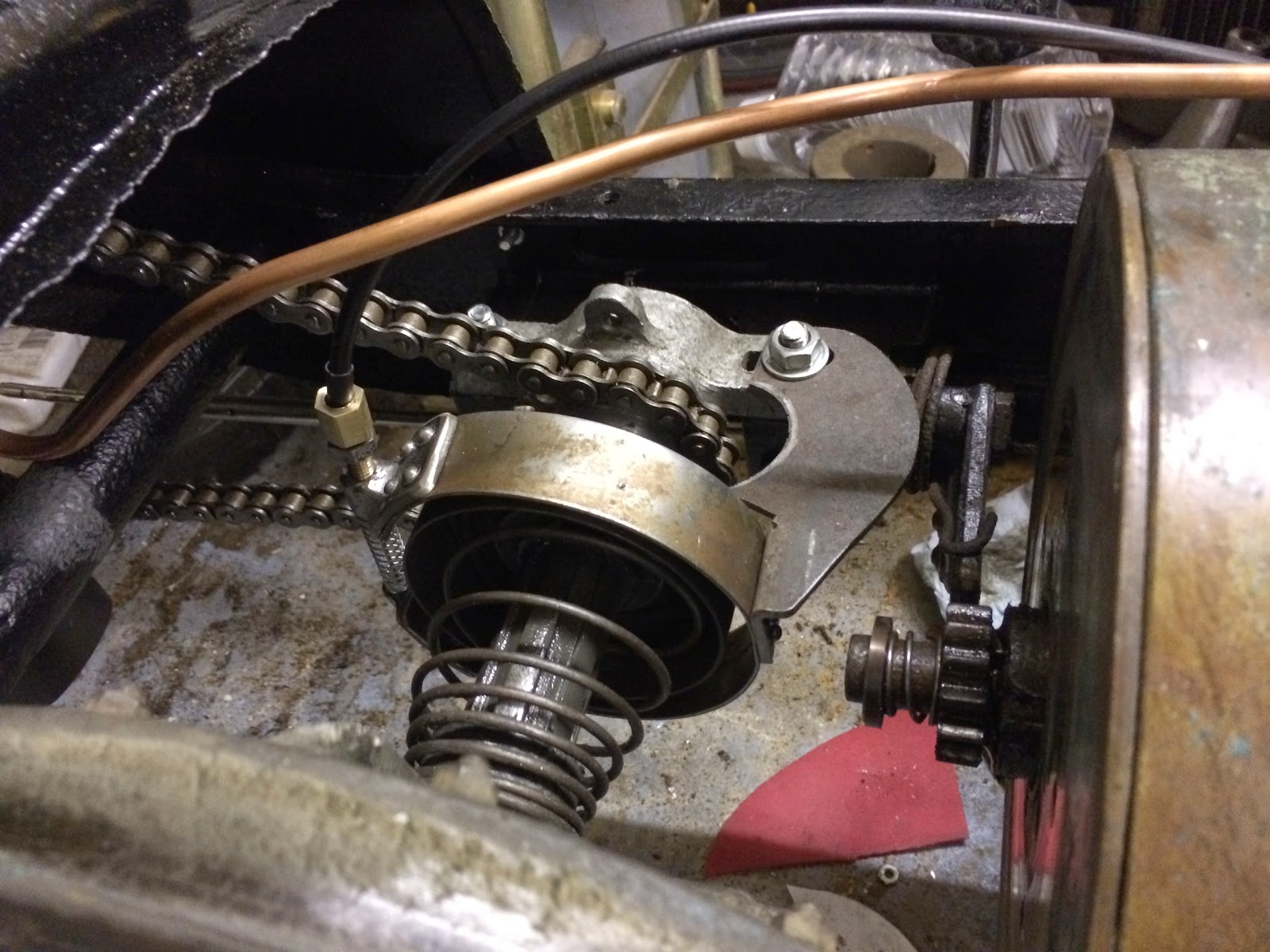 I have been thinking of ways to make the tin guard for months. Ideas have included metal-spinning, making a press tool, welding sheet to some thick-wall tube and then bending it in a hydraulic pipe bender before cutting it off again. In the end I decided to go back to basics and try panel beating. ie, just hitting the metal with a hammer until it was the right shape.

First I made a guide out of plywood in an attempt to ensure that I could make two vaguely similar halves: 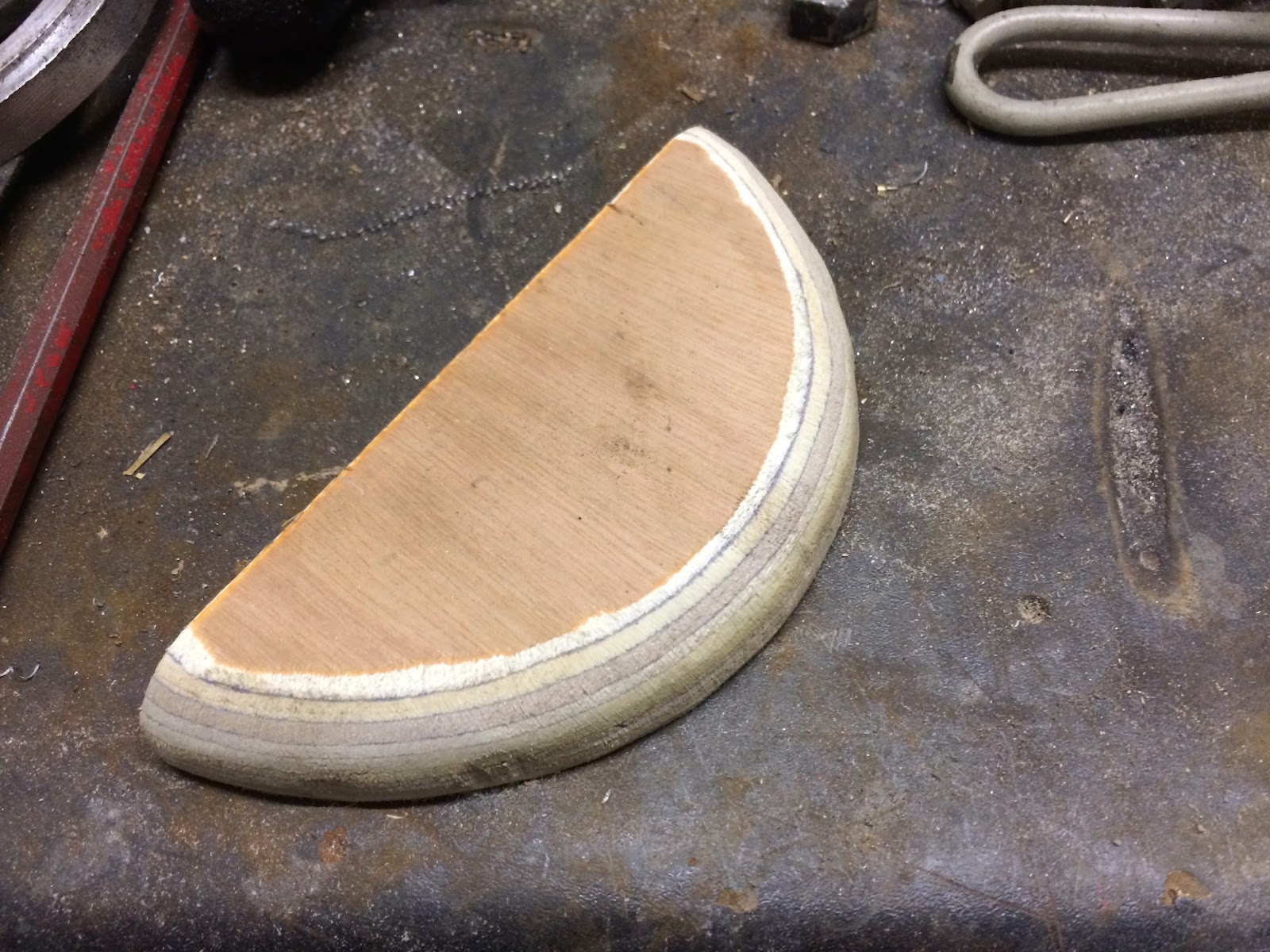 Then cut out a bit of 22-gauge just a bit bigger: 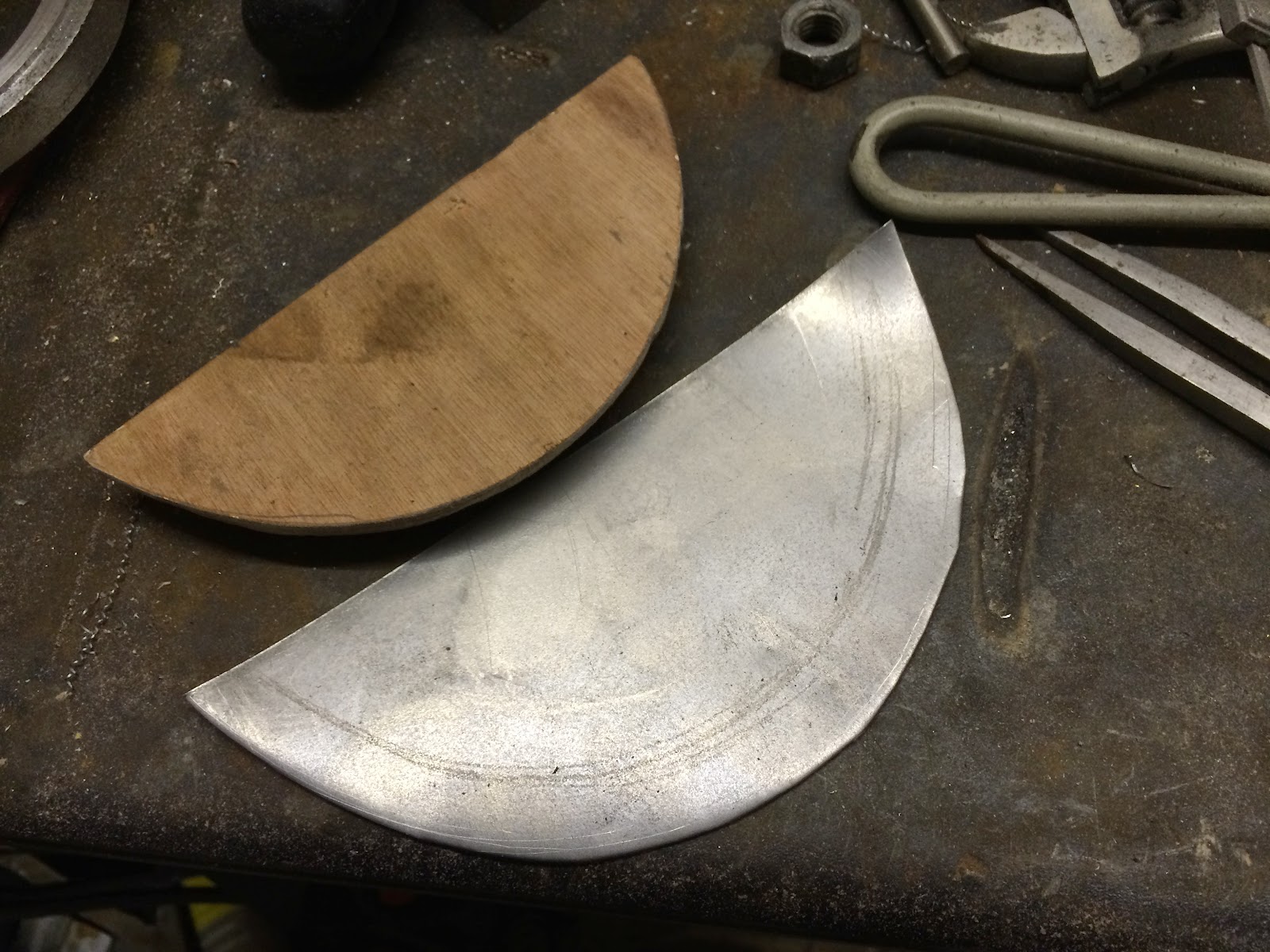 I then foraged a bit of wood from round the back of the garages. (my neighbour is a fencer) and started to tap the basic shape into the metal with the ball-pein of a normal ball-pein hammer. (I got as far as looking at panel-beating sets in Machine Mart, but decided to try the tools I had first. I did have a large surplus of 22-gauge). 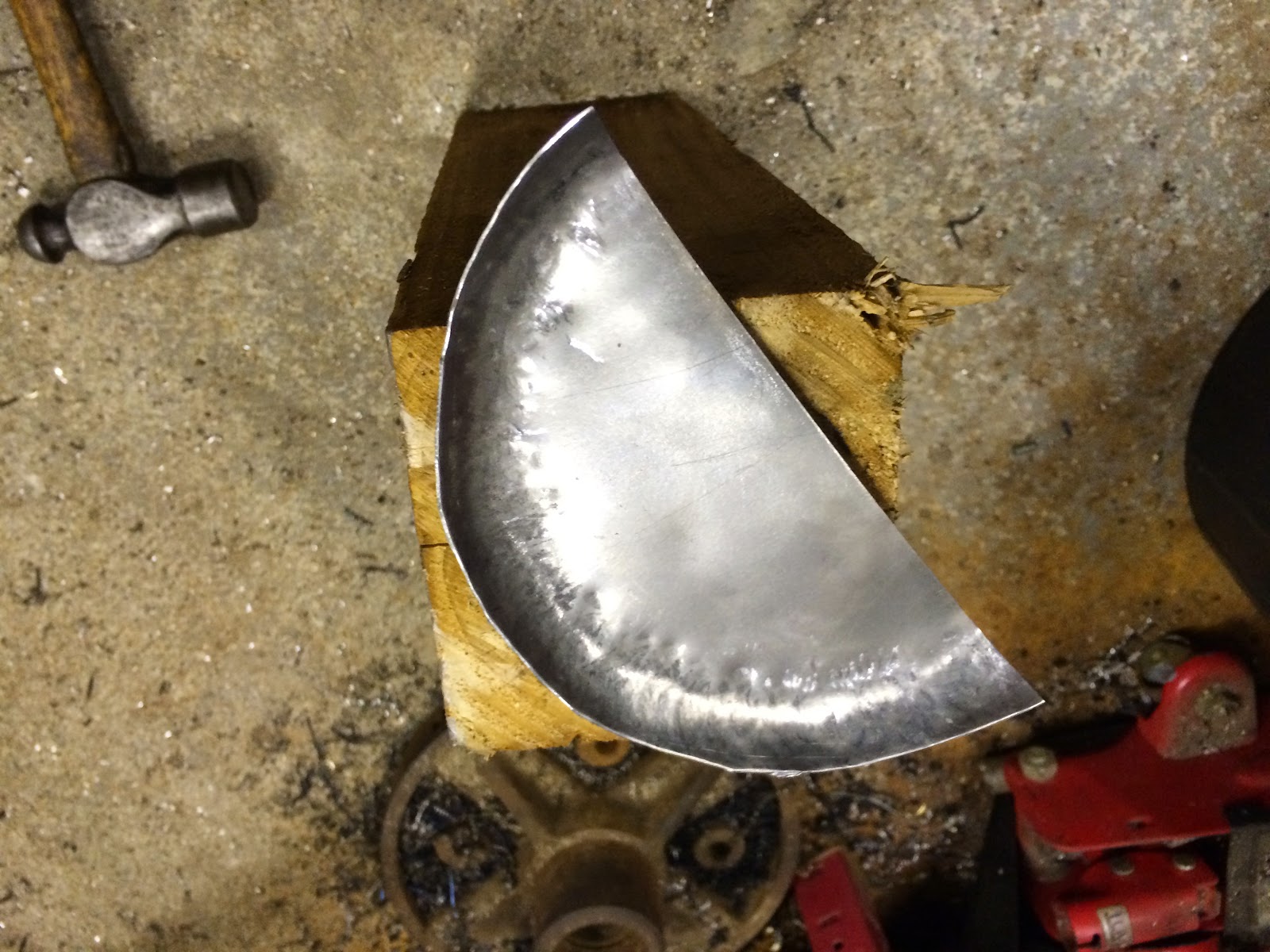 At this stage I was getting a bit worried about the "dentiness" of it, and thinking that I might need some spoons for smoothing out in the end.
It was at about the stage that I started to run into problems with the turned-up edge being too long and wanting to take on the air of a Cornish-pasty crust. This is just geometry. I think that there are special shrinking hammers to help cope with this, but I don't have one. To help mitigate this problem a bit I cut out the central U-shape so that the part could twist up a bit and also annealed the material as it was getting a bit work-hardened. 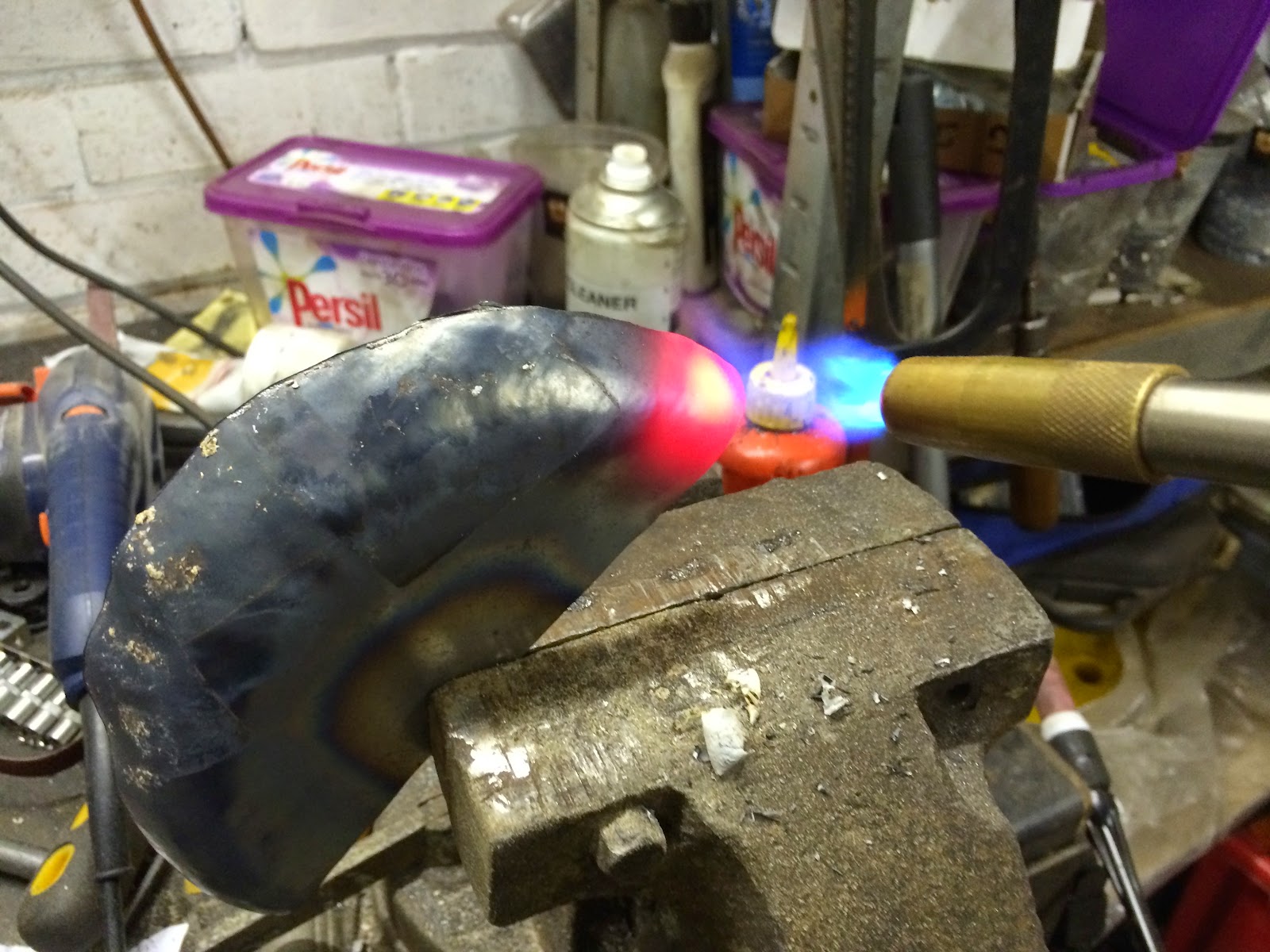 This seemed to help, and after another 15 minutes or so I had one adequately-dished side: 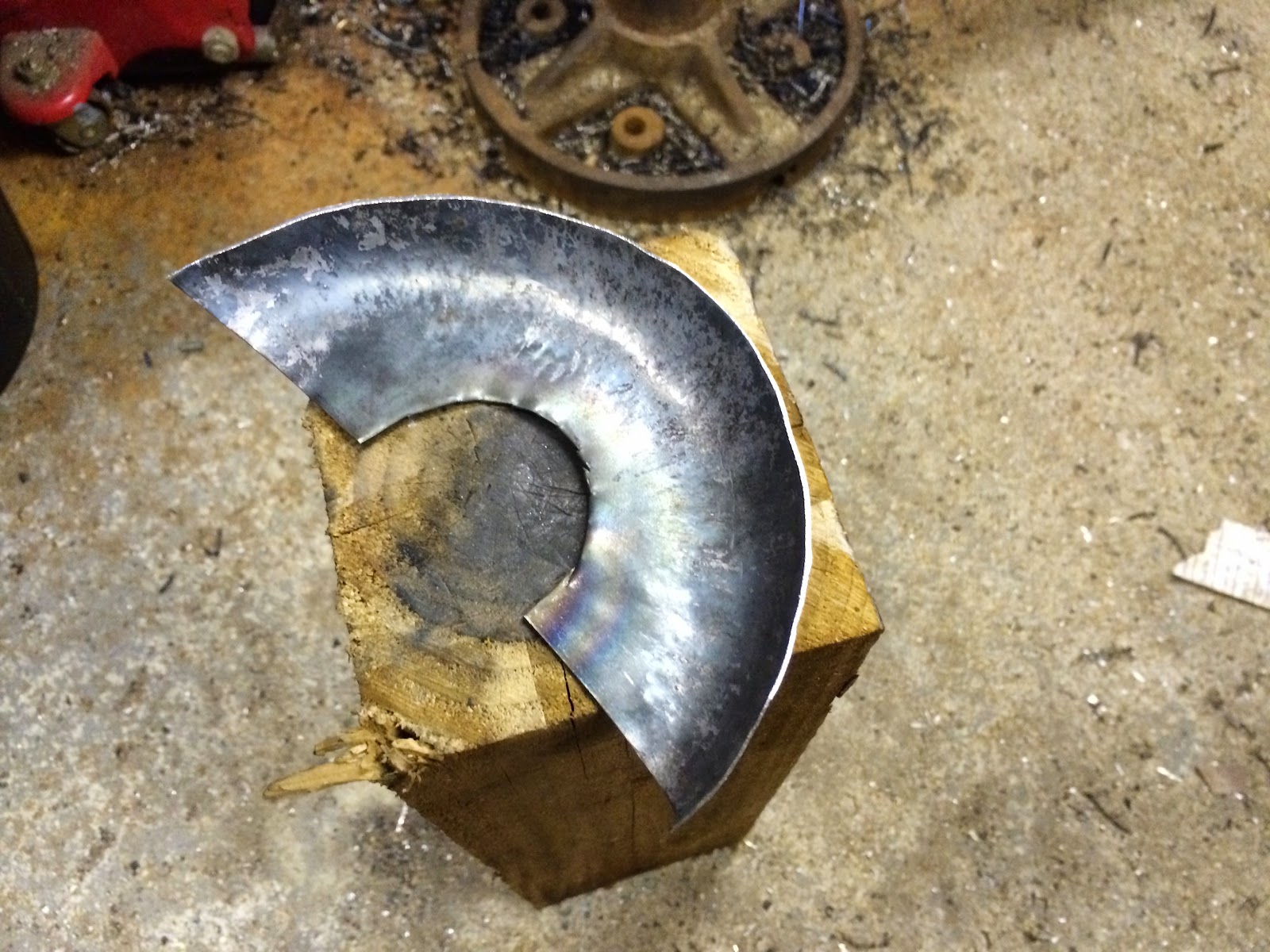 It is interesting to note that the individual hammer dings seem to have largely disappeared by this point. I am not sure how.

I then made another half and sanded the edges to be approximately flat. The two sides at this point absolutely did not fit together, and the "pie crust" effect was very much in evidence. The solution was to make the two halves hold each other in place.
I tig-tacked the middle of each edge together, ignoring the large gaps elsewhere. Then hammered the metal so that a point 10mm or so away touched and there was no gap for that 10mm, then tacked again. By iteratively working along the seam like this I got to this stage: 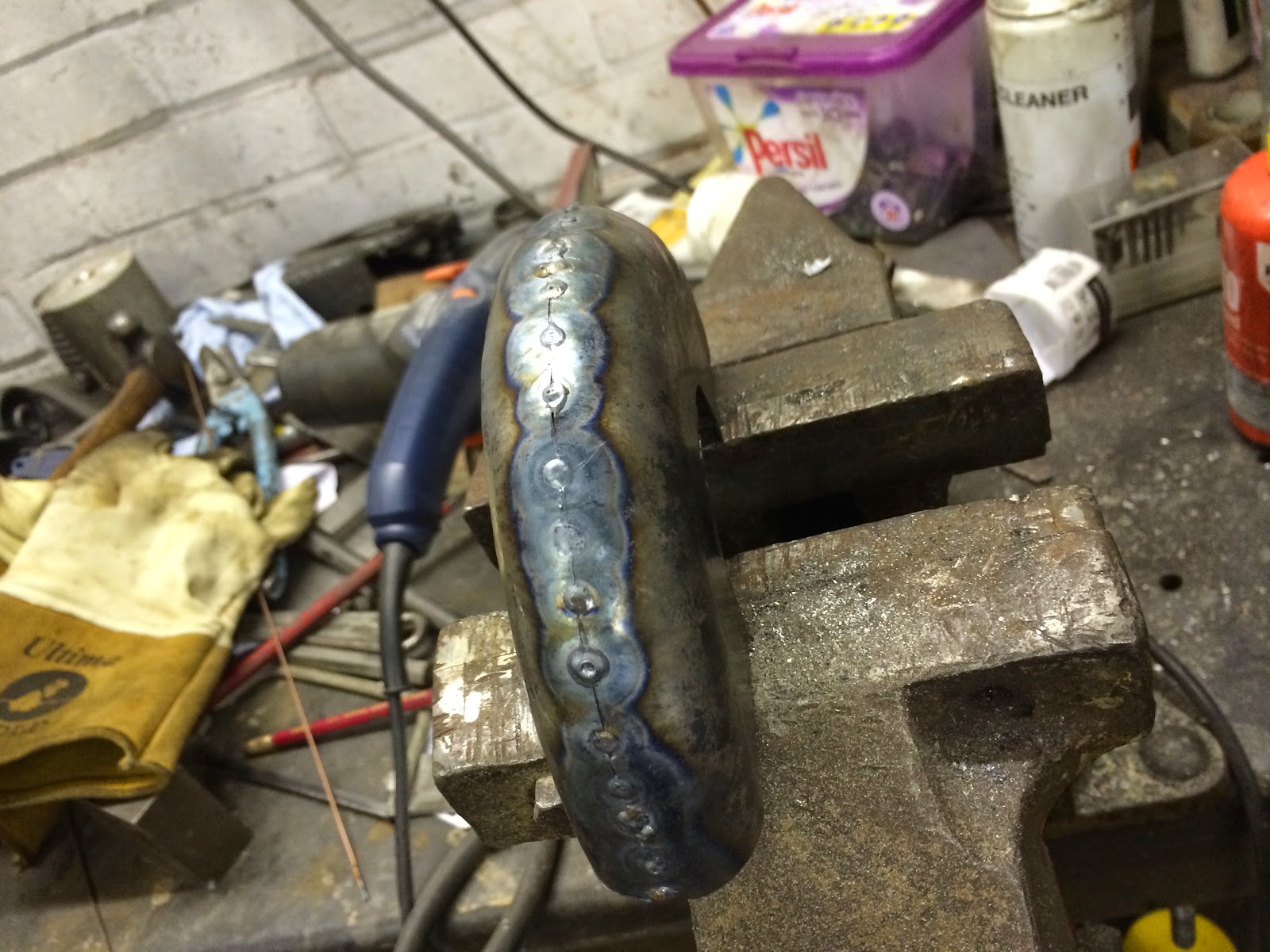 At this point the two halves seem to be restraining each other into almost the right shape. It was about at this point that I started to believe that it was going to work.

I then seam-welded and sanded the whole joint: 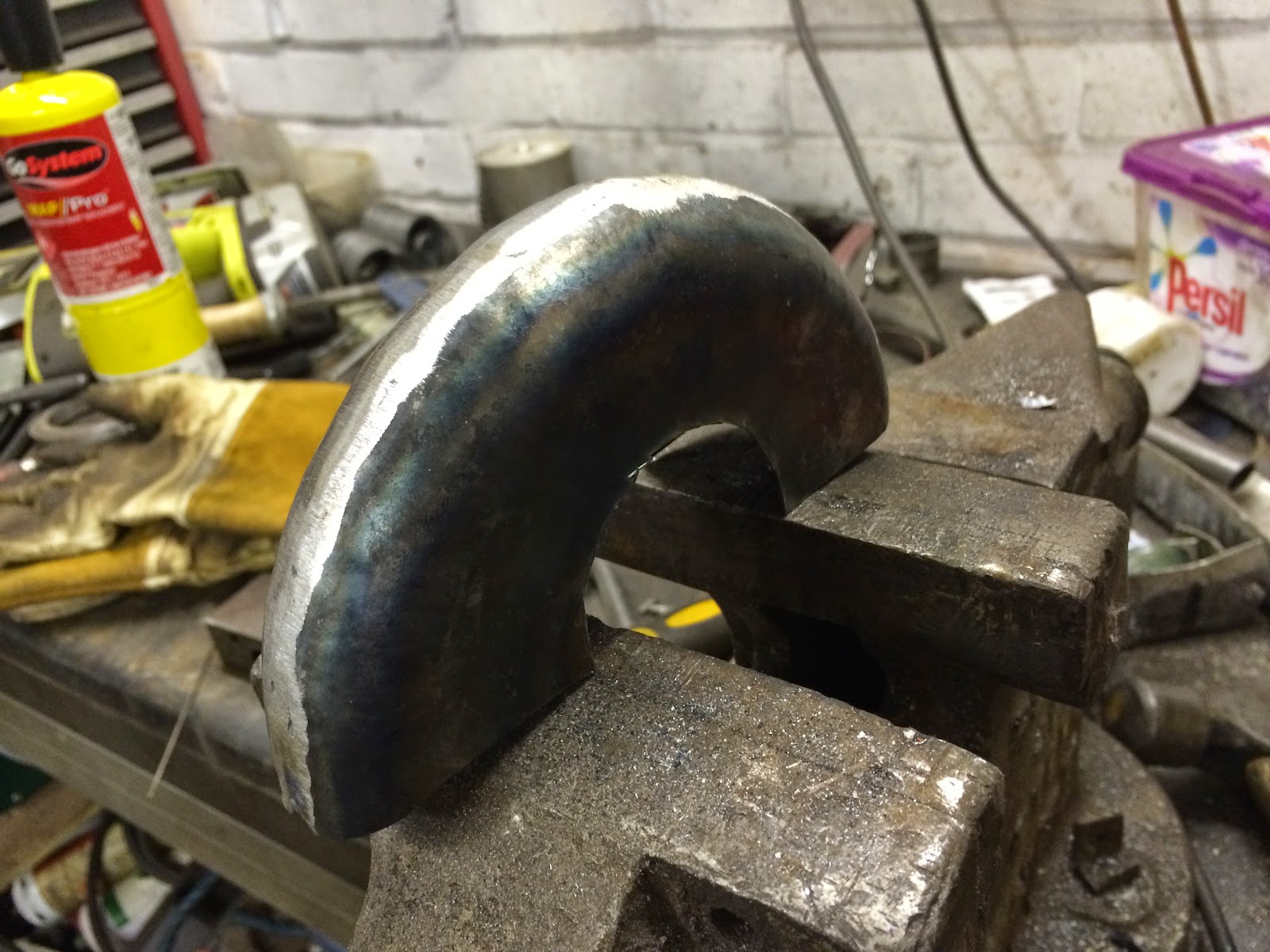 I trial-fitted the parts to the bike, marked height and alignment with a paint-pen, then put in a single tack-weld to check once more, before doing the final weld. I think that this is the only part originally welded in the whole machine (and, in fact, it might be brazed on the original parts) 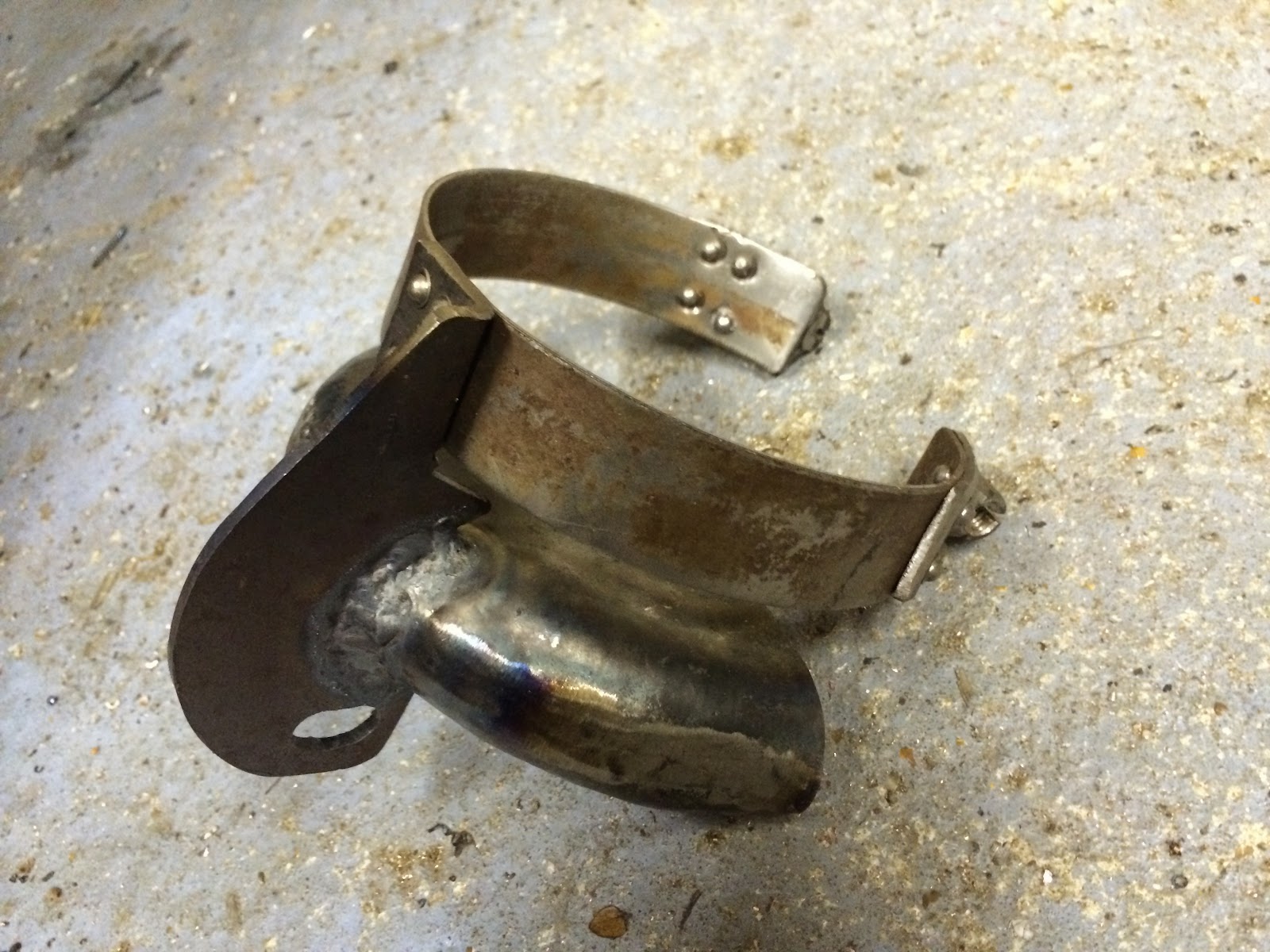 The brake linings came from Saftek as straight lengths at the desired width and thickness. Saftek used to be BBA, and before that Mintex. My grandfather worked there for 30 years or so, I have his 25 years service gold watch engraved with a dedication from the directors of BBA.
The material needs to be pre-curved which was done by putting it in the oven at 200C on a suitable former (luckily I had some 3.5" aluminium tube) and then held against the former as it cooled. On reflection, if I was doing it again, I would heat the linings then press them against a cold former. I think it would work faster and hurt less. With the linings curved and cut to length they were rivetted to the band with the rivet squeezer. 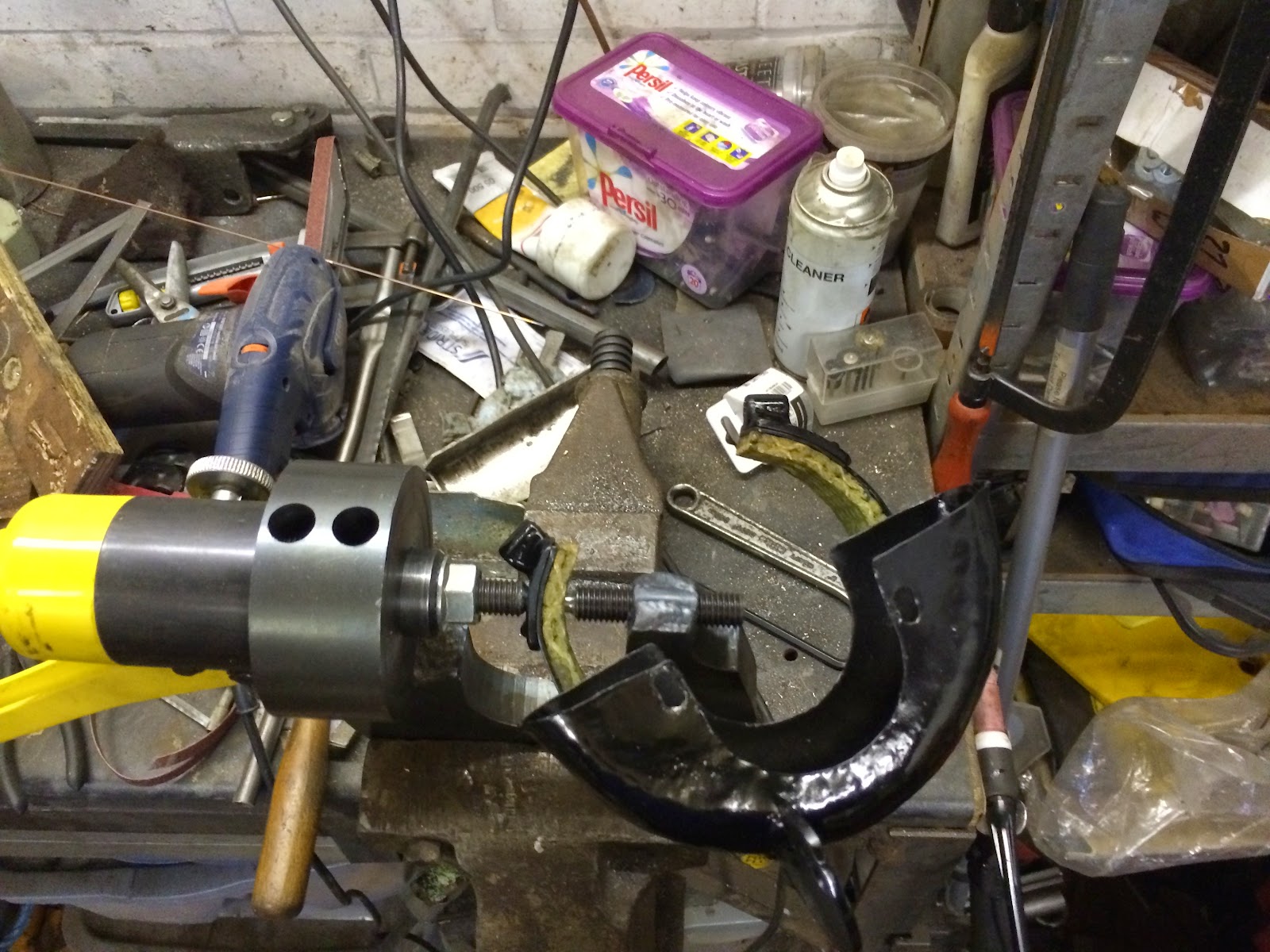 And finally the whole thing was mounted to the bike. 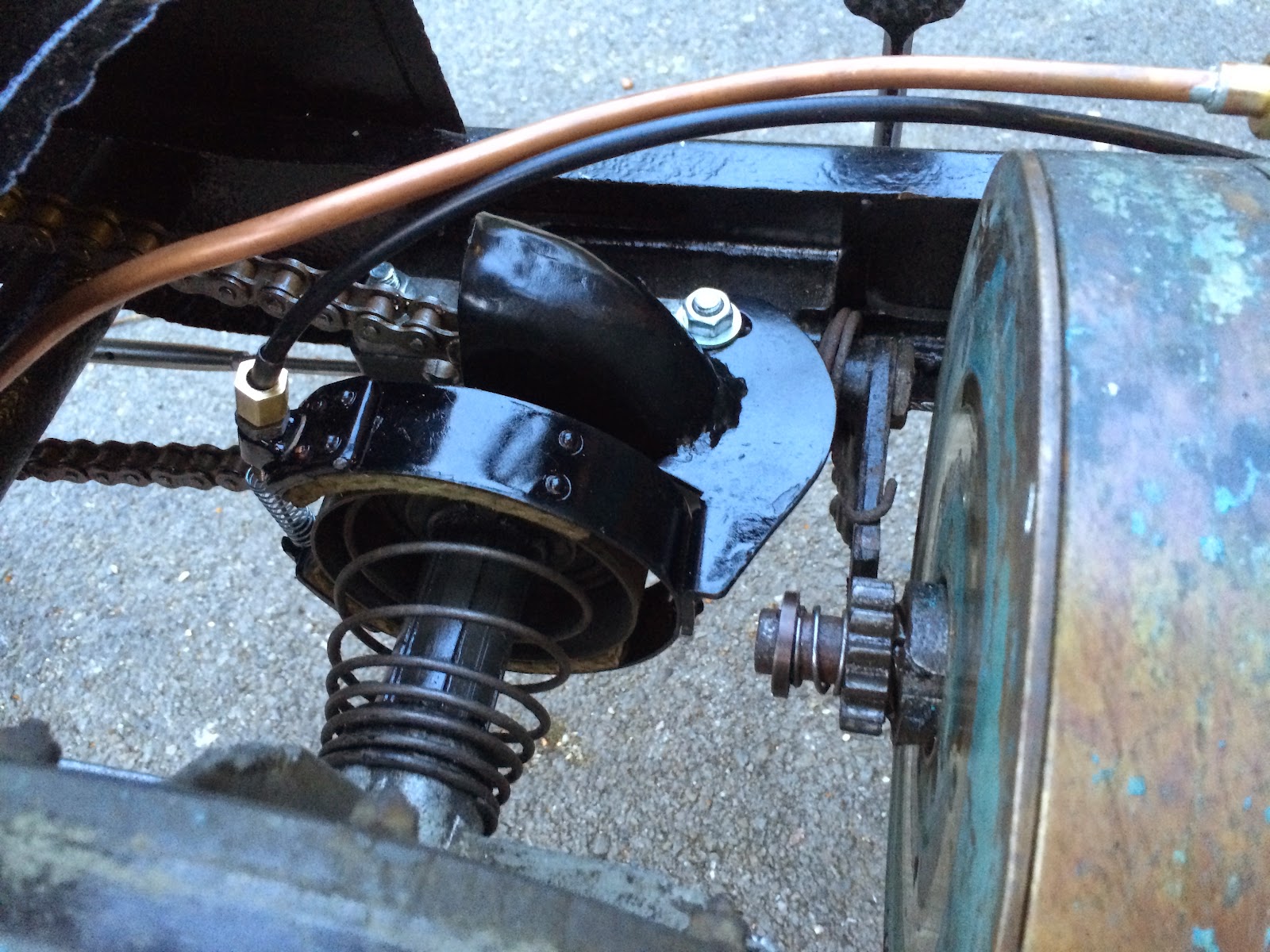 I think that means that the bike has everything it needs for the road. Apart from the paperwork.

Email ThisBlogThis!Share to TwitterShare to FacebookShare to Pinterest
Labels: Ner-a-Car, Neracar09 It's a Motor Bike!