In the last thrilling instalment of the Holbrook saga I got the lathe spinning and usable as a lathe.
So, naturally, the next thing to do was to disable it again, by unbolting important parts.


The reason for this was to determine what I would need to change to convert to CNC, as that is what the machine was bought with the intention of doing.
Much of this post is likely to be of extremely limited interest to anyone who has no interest in dismantling a Holbrook Minor, but I thought that it was worth sharing what I discovered about how to do that just in case.

My intention was to mount a servo motor inside the feeds gearbox. The Holbrook already has a feed motor in this area, as it has variable speed feed drive, rather than being driven from the spindle and geartrain.  The front of the gearbox comes off relatively easily when the gear selectors are removed, all of which have the usual spring-loaded ball detente to lose when pulling the knob forward. 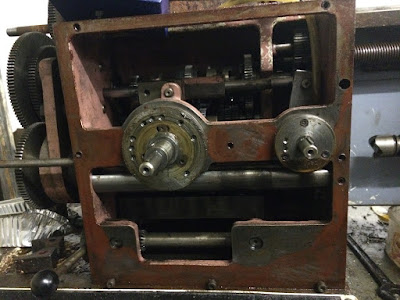 Inside there is an awful lot of stuff, all very nicely made. One thing that isn't in there are 5 of the gears that there are spaces for, as www.lathes.co.uk mentions. These correspond to the missing detentes in the larger detente circle in the picture above. Maybe there just no standard sizes there. 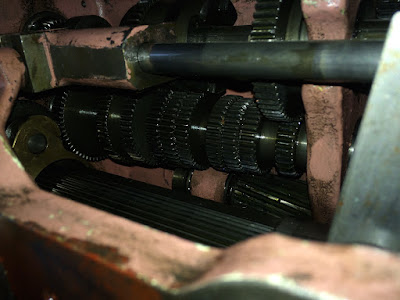 A typical lathe "Norton Box" has a tumbler that rolls an intermediate gear round a very long input gear (as can be seen in the picture above). Then the tumbler engages a sloped row of holes, the height of the holes being set by the different sizes of the gears being engaged with.
Not so the Holbrook. That has a sliding plate with a cam-slot in it. A spherically-pivoting peg engages in the slot. The slot is exactly the right shape to perfectly engage each gear.
Holbrook could provide custom gear-sets to order. That means that they were able to provide custom cam-slot-plates too. In the days before CNC that can not have been cheap...

The side panel of the feeds box stumped me for quite a while. You can loosen it simply by taking all the screws out. But that still leaves it shape-locked in place.

The first thing to do is to withdraw the leadscrew a few inches. If your leadscrew still has the end-thrust bearing (mine has gone missing, but luckily that doesn't matter to me) then that will have to be removed. The leadscrew drive is through a taper pin, this needs to be driven out.
NB: It is much easier to drive a taper pin out of the bigger end of the taper hole. Don't ask me how I learned that.
To pull the leadscrew out once the pin was removed I ran the carriage up to the chuck end, engaged the half-nut and then pushed the carriage back using the compound slide against the flat face of a chuck. 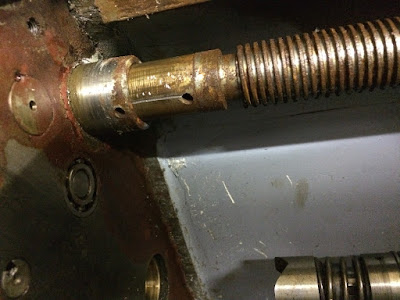 The observant will have noticed that this was a posed photo.

The power feed shaft puzzled me for a while, until I eventually noticed that, under the paint, there is a retaining cover for the overload clutch. With that removed the whole overload clutch assembly actually pushes itself out. 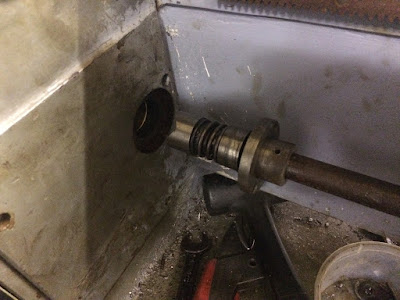 With the shafts removed, it is time to go round the back to look at removing the feeds box.

There are a number of brackets and suchlike for the back-gears, the removal of which I am too lazy to describe.

Round the back of the lathe lives the DC feed-drive motor. It is quite large, and pokes right the way through the bed: 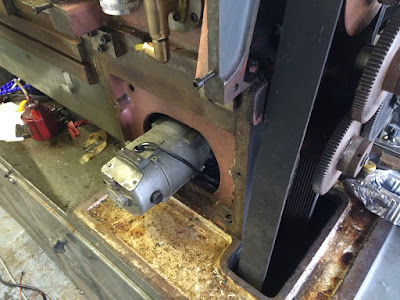 On the pink-painted face round the motor can be seen a number of holes. 4 of these allow access to the socket head screws that hold the gearbox in place. And 2 allow access to the locating dowels. It helps to have some 1/4" drive Imperial hex key sockets to undo the bolts. It is possible to assemble a 3/8 socket on the extension bar after poking the bar through the hole, I proved this to be that case and hope not to have to prove it again.

With the bolts undone, the gearbox slides out moderately readily. It is all stuck together with red Hermetite, I freed it by loosening the bolts a few turns then punching against the bottom of the socket holes with a drift. 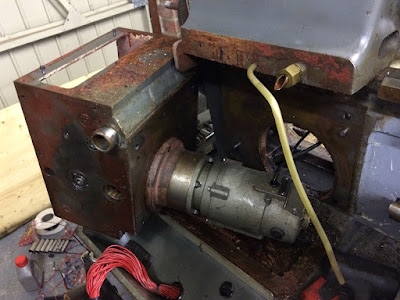 The picture above also shows the oil feed pipe to the spindle-mounted oil pump, and drain pipe which trickles into the gearbox.
I had noticed when my lathe started to run that there was no evidence of oil flow in this system.
I confess I am concerned about this, how long has the lathe run with no oil flow? 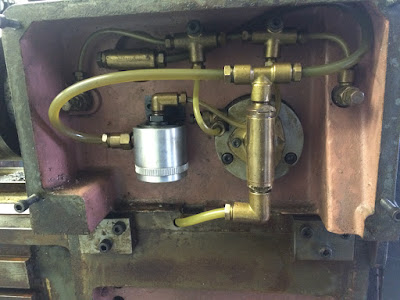 Above is the oil system mounted on the back of the spindle housing. The aluminium housing contains a sintered bronze filter. Mine was hard to access, I had to remove the housing from the machine and hold the body in a 3-jaw chuck to have any hope of getting the bottom off to remove the filter element.
For reference (as you can't see the label when it is mounted) the filter is Bijur Type B-7239 Ser A1.

I found that the problem was debris jammed in both of the spring-ball valves in the pump body (the vertical brass tube). The valves are easily-enough accessed by removing the top and bottom fittings, but for reasons of access I had to unmount the two T-pieces at the back.

Having dismantled the lathe to this state I was able to take a number of critical measurements to make progress on my 3D CAD model of the lathe. 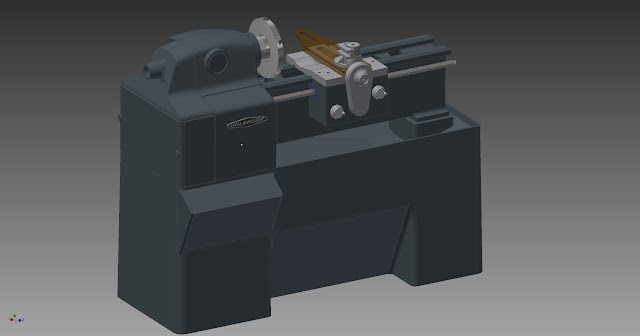 My original plan had been to disembowel the original feed gearbox, but having seen the quality of the work that went into making it, and having looked at the internal layout, I decided that that wasn't a good plan. So I designed a new box from laser cut and welded plate.
The quote for the laser-cutting (in quite thick steel) came to £120. This was more than I expected, so I rang the foundry I sometimes use. He quoted me £80, so I decided to make a casting....

And then I put the lathe all back together again, I will need it later.