In the last instalment I had the Z axis motor mounted and the Z-screw ready to install. But the apron casting still needed a hole through it, and a socket for the ballscrew.
First, though, I needed to make a new gib strip to suit the new apron. I couldn't use the old one, as that had gone missing at some point during the rebuild prematurely curtailed by the demise of a previous owner.
I had a couple of strips of iron cast for the job. I have previously made a gib from a length of round Durabar, and it took an awfully long time. Part of the problem was that the round bar was difficult to hold while machining-away most of it.
For this gib I made a fixture to hold it, a lump of aluminium with a slot milled in it and a bunch of allen screws: 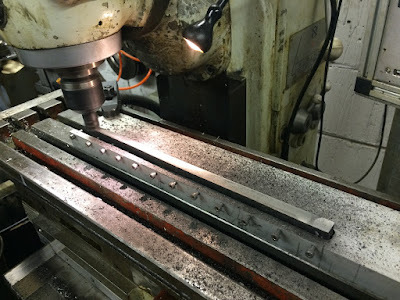 I machined it to as close as possible to the same taper as the groove I had machined in the apron casting (CNC makes this really rather easy) then scraped it to final fit to blue using an arrangment of edge-clamps on the mill table to stop it sliding about. 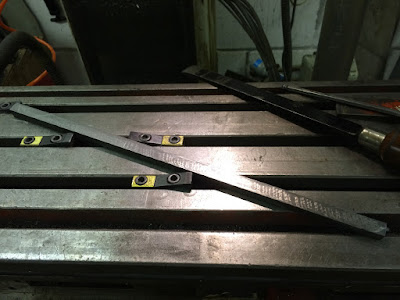 And here it is in-situ. No adjusting screw yet. 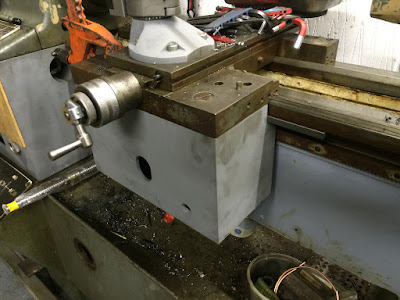 At this point it became evident that the bed is worn near the headstock end, the gib wants to be about 20mm further in at that end than at the tailstock end. I am trying to decide what to do about that. I got a quote for a regrind (£940) but that includes a lot of work that I don't need, such at Turcite under the saddle to retain the apron height and a cross-slide rebuild. Further thought is needed. Maybe another hand-planing setup is called for, it worked well on the Rivett.

With the apron now fitted and gibbed-down I was faced with drilling a long hole right the way through the saddle, and a socket for the ballscrew that needed to be in an accurately located place. My milling machine is much too short of travel to make the hole. But I had a cunning plan. It isn't a coincidence that the socket for the ballscrew is No3 Morse Taper, I did that on purpose to allow me to do this: 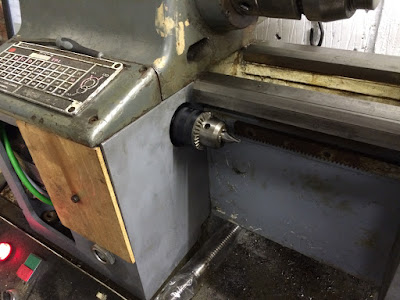 The 1kW servo motor is more than capable of spinning a drill but I had to take something of a break from machining to use this idea, it was necessary to start wiring the system up, including fitting the PC and finding a place for the servo power supply. I finally settled on putting the servo PSU behind the headstock.

I started with the centre drill as above, then switched to an MT2 long-series drill in an extension adaptor to drill a though-hole: 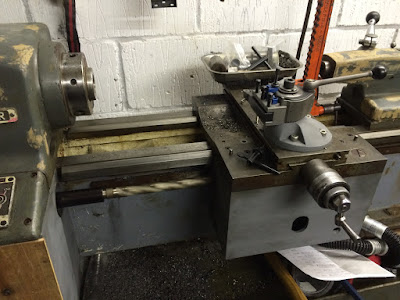 I used a carver clamp in the saddle to give the tailstock something to push against to supply the feed, and after rather a long time with lots of chatter and squealing, I finally saw the drill emerge from the far side. 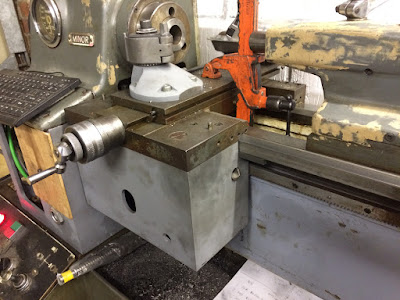 I then fitted a boring tool to the Z-drive to create a register exactly concentric to the drive as a reference.

The apron casting was then transferred to the mill, where I centred to the reference diameter using a coaxial indicator  and bored the pocket for the ballnut with the boring head. 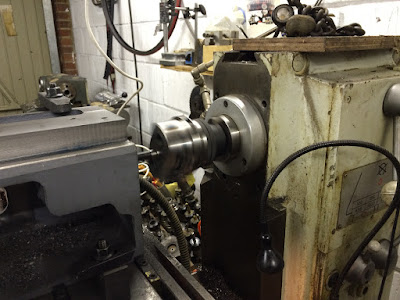 A bit of CNC milling made a pocket for the ballnut flange. 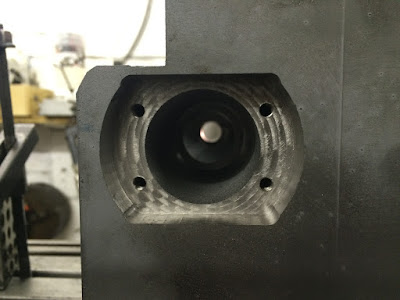 The casting was then reversed on the mill to allow me to come in from the other side. I didn't clock-up to exit hole of the drill as it was evident that the drill had wandered rather a long way. As it was cutting through radiuses and skimming along a few mm inside the top face of the casting cavity this was no real surprise. I kept the same height setting as the ballnut side, and set the lateral position relative to the rear reference face and then corrected the hole position with the boring head.
Even with the 100mm boring tool bought specially from China for the job it wasn't possible to get right to the middle, so I ended up using a lathe boring bar to "knife-and-fork" out the central 1.5" of the ballscrew path. I had decided to fully-enclose the screw, so I pushed in an aluminium tube with a couple of O-ring seals round it. This keeps the screw separated from the X-motor and its wiring and keeps the oil tank completely sealed. The tube also provides the required register for the spiral spring cover that will eventually be fitted.

If I was doing it all again I would definitely mount the ballnut on the left side of the apron. It makes assembling everything easier, it means that most cutting forces are pulling against the nut flange, it would put the nut in a convenient place to be oiled, and it would leave more space round the motor. But hindsight is a wonderful thing. 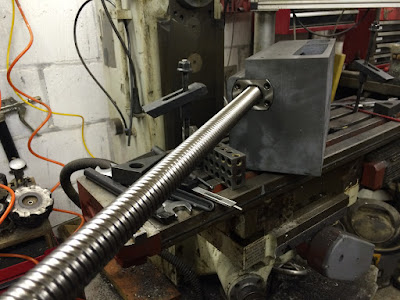 It was then finally time to thread the preloaded ballnut onto the ballscrew and put the apron back on the lathe. 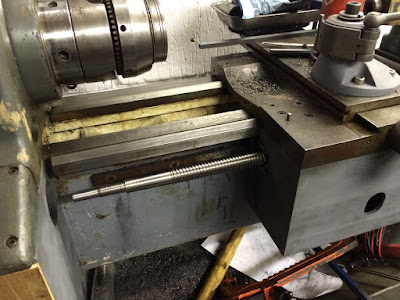 Then push the screw home and tighten the retaining nut. Actually I haven't done that yet, It is going to need a deep socket and a special tool. 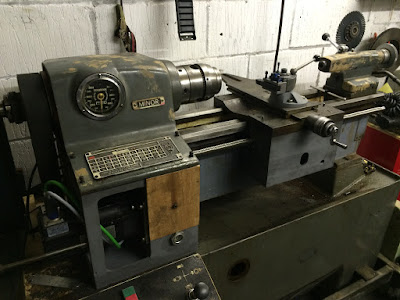 But even finger-tight there is enough drive on the MT3 taper to drive the carriage back and forth:

It's nice to see it moving, but I would be happier if I knew what I was going to do about the bed wear.
Luckily if rectification means that the saddle drops, it just means a bit of a skim off the top of the apron casting to put things right.