I recently managed to lose my house keys. I don't know quite what happened, but I came down one morning to find my front door open and my house keys (but nothing else) missing.

Soon after I moved in I had changed all the locks to use the same key, by buying a keyed-alike set of locks from locksonline. So the front and back doors, garage door, shed door and garden gate are all on the same key. That's 6 locks and 12 cylinders.

Knowing that somebody out there had my keys, and knew which house they belonged to wasn't super-comfortable so I made things secure by putting back some of the old locks and leaving a key in the lock on the inside on others. (You can't get a key into one side of a euro-cylinder lock if there is a key already in the other side that it turned slightly. )

I was going to get a whole new set of locks, but that looked like costing at least £140 even for cheap locks, so I decided to see if I could just re-key the existing set of locks. I found lots of information on the internet, but most of those were starting with a picked lock, not a lock to which you have a key. And whereas I can pick locks reasonably well, I didn't want to do 12 of them in an afternoon.

With a conventional cylinder lock you can simply withdraw the unlocked cylinder and slide a plug in from the back to retain the pins. This isn't an option with a Euro-cylinder, you need a special "keying shoe". These are available very cheaply, so I made one. 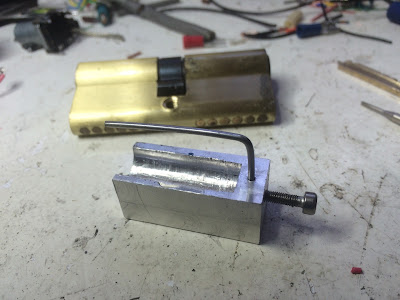 It is a bit of aluminium bar with a groove milled in it, and a bent bit of piano wire (1.6mm). I had to grind the piano wire to a square-ish section to allow it to fit nicely into the bottom of the lock key-slot. 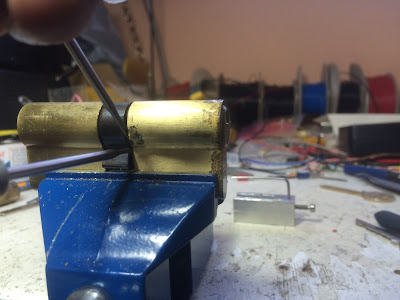 The first thing to do is to remove the circlip from one side. There are special tools, but I just used 2 screwdrivers. The photo above isn't really very good, because I was trying to hold two screwdrivers and a phone camera. And ran out of limbs. 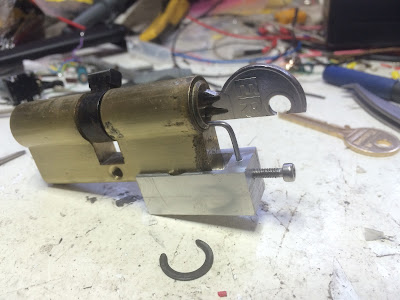 The second "special tool" you need to go with the pinning shoe is a key with the back milled off. You could file it off, it would work fine, but I had the mill set up and running so I used that.
You put in the special key, rotate the cylinder by 180 degrees, then slide in the pinning shoe and slide out the key, pins and cylinder. 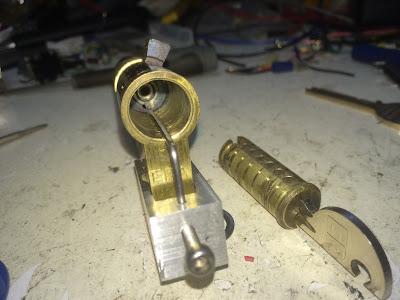 Here you can see the cylinder removed and also see how the bent wire holds all the pins and springs in place. 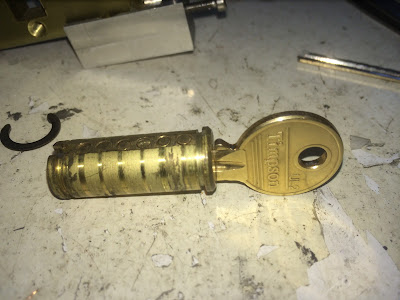 This is the new key with the existing pins re-arranged. The key was a blank bought from the local key-cutter. I marked the pin positions by passing a drill down the pin holes, then filed them to height to suit the new pin order. If you were very lucky you might find that you had a key that already fitted the permuted pins. 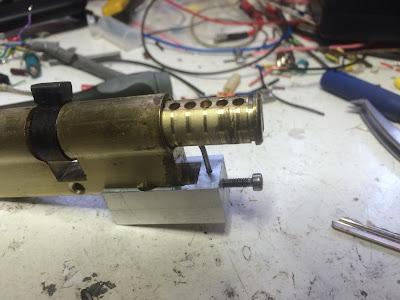 It is probably worth describing the re-assembly procedure. It is possible to get the key and the cam 180 degrees out of phase.

You won't be able to slide in the barrel with the new key fitted, and if you can slide it in with the modified key then you haven't changed anything.

Do not forget to put the spacer-blocks back in. The way that a Euro-cylinder works is that the key pushes a widget into engagement with the cam. There are spacer blocks to make up for the many possible cylinder lengths. Having put the cylinder back together leaving out those blocks would be annoying, as you would then need to make a cut-back version of the new key. Luckily I noticed in time.

Push the barrel in far enough to hold the pins down, but not quite all the way. Then withdraw the keying shoe.

Put the cam somewhere in the rest position, ie pointing towards the retaining screw hole, then rotate the cylinder into the normal orientation. When it is close you should be able to engage it with the cam and also let all the pins drop home. Your new key should now open the lock. But be very careful, as it is easy to pull the whole cylinder out at this point and all the springs will go everywhere. Don't ask me how I know this. It is possible to re-insert the springs and top pins, starting from the front of the lock and working back with tweezers and sliding the pinning shoe in one pin at a time. But it's tedious and fiddly. I told you not to ask how I know.

Put the circlip back, and do the other half.

When you have the rhythm it's a pretty quick job, less than 10 minutes per lock.