The last bits and pieces

The Ner-a-Car was somewhat unusual for the time in having self-generated electric lights. It seems they were not sure of the concept, because it also has Acetylene lights.
The light switch is an extremely solid and over-built device, as can be seen in the detailed pictures on Ben's website.

Luckily an Italian owner had already had some switch body castings made, so we struck a deal where I completed all of the switches and sent him one, keeping the others.

After drilling the screw holes the next job was to make the square hole for the switch shaft, and for that I had to make a square broach. 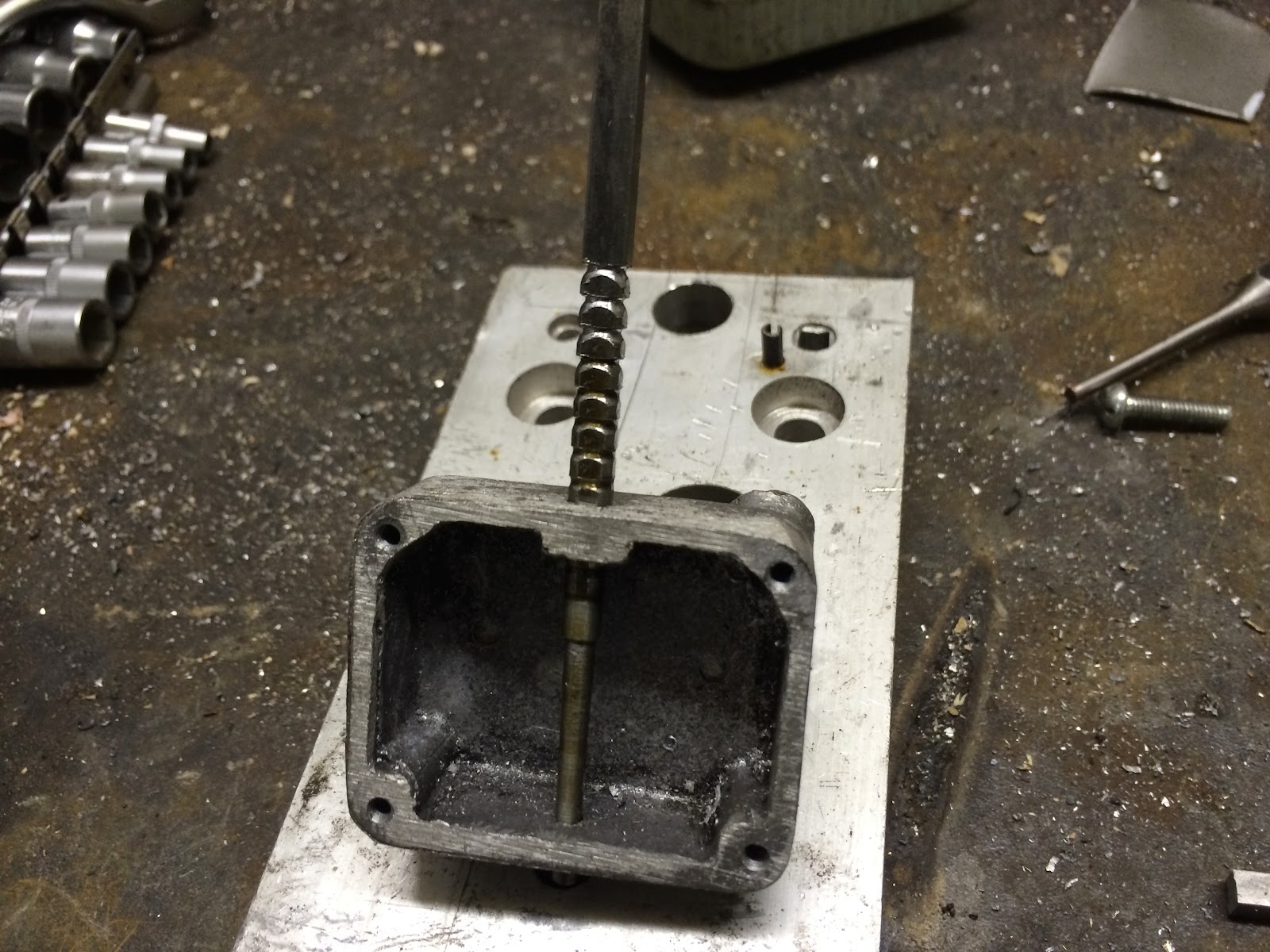 This was a bit of a pain as there wasn't really enough travel for the broach to work properly. But after repeated operations it did the trick.
I then machined the little brass and bakelite lozenges: 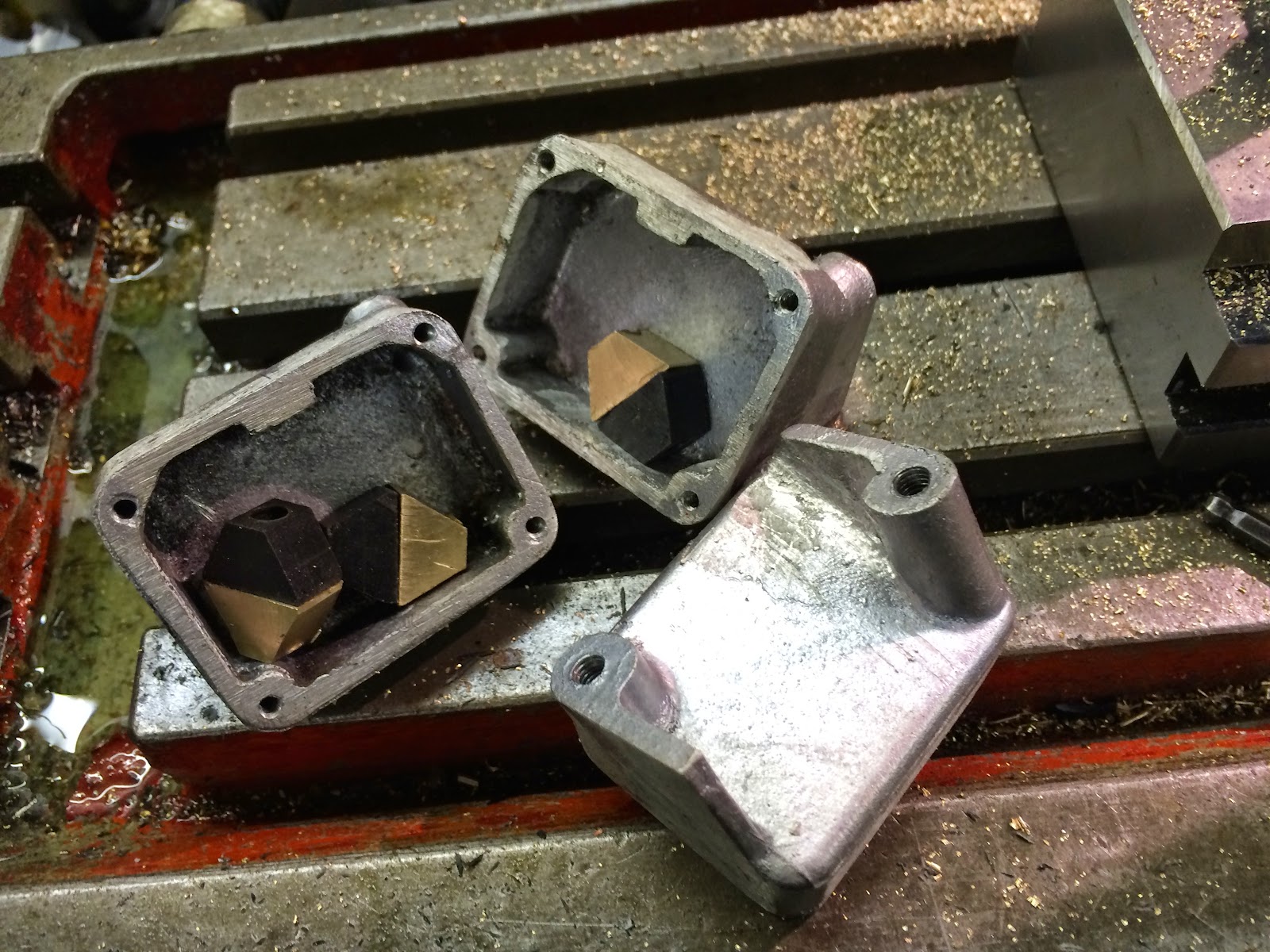 And did a trial assembly. 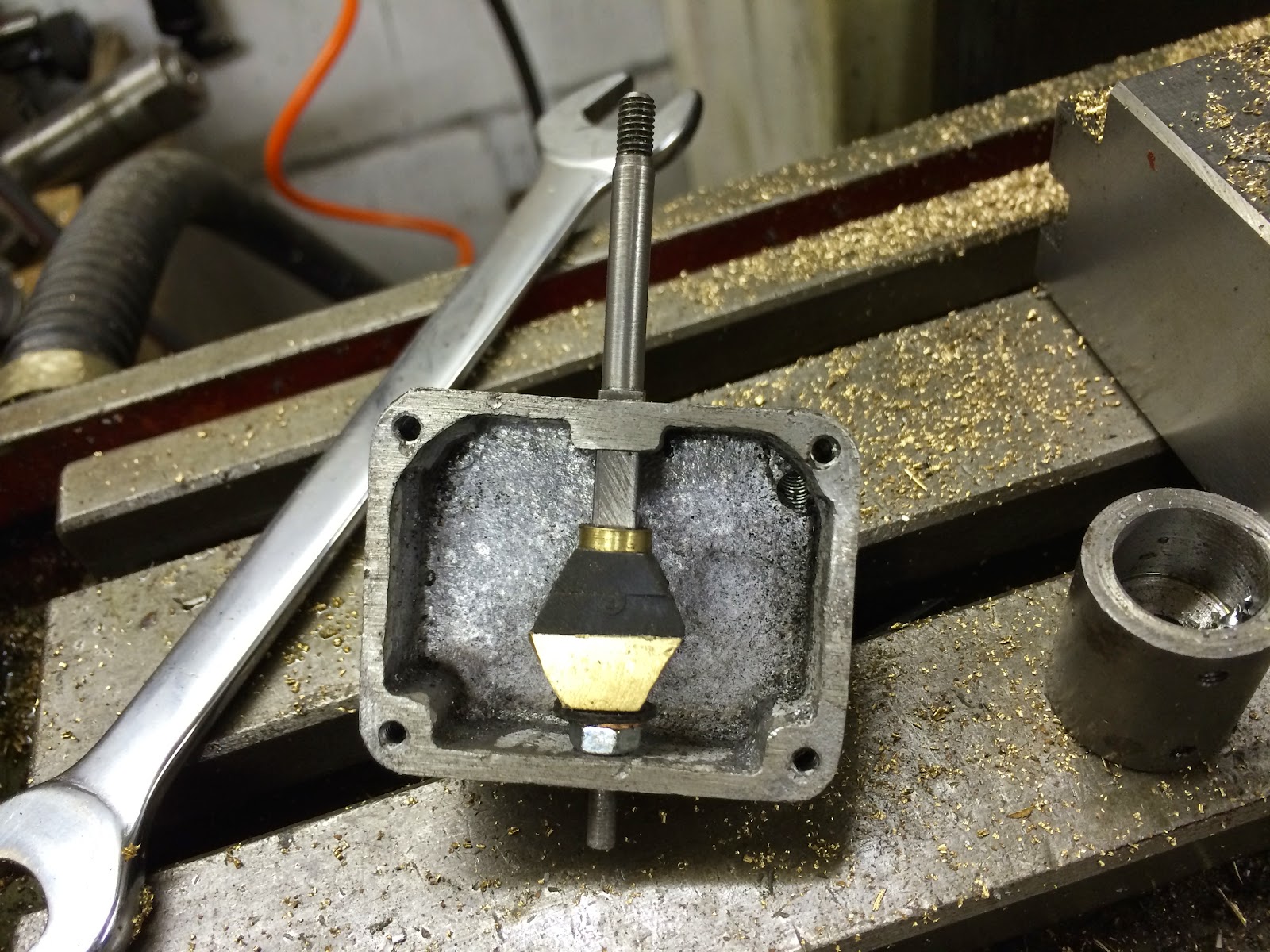 The bakelite sheet I got from eBay was a metric thickness, so I skimmed down the top-covers to the correct thickness on my lathe, holding them to a lump of brass with double-sided tape. 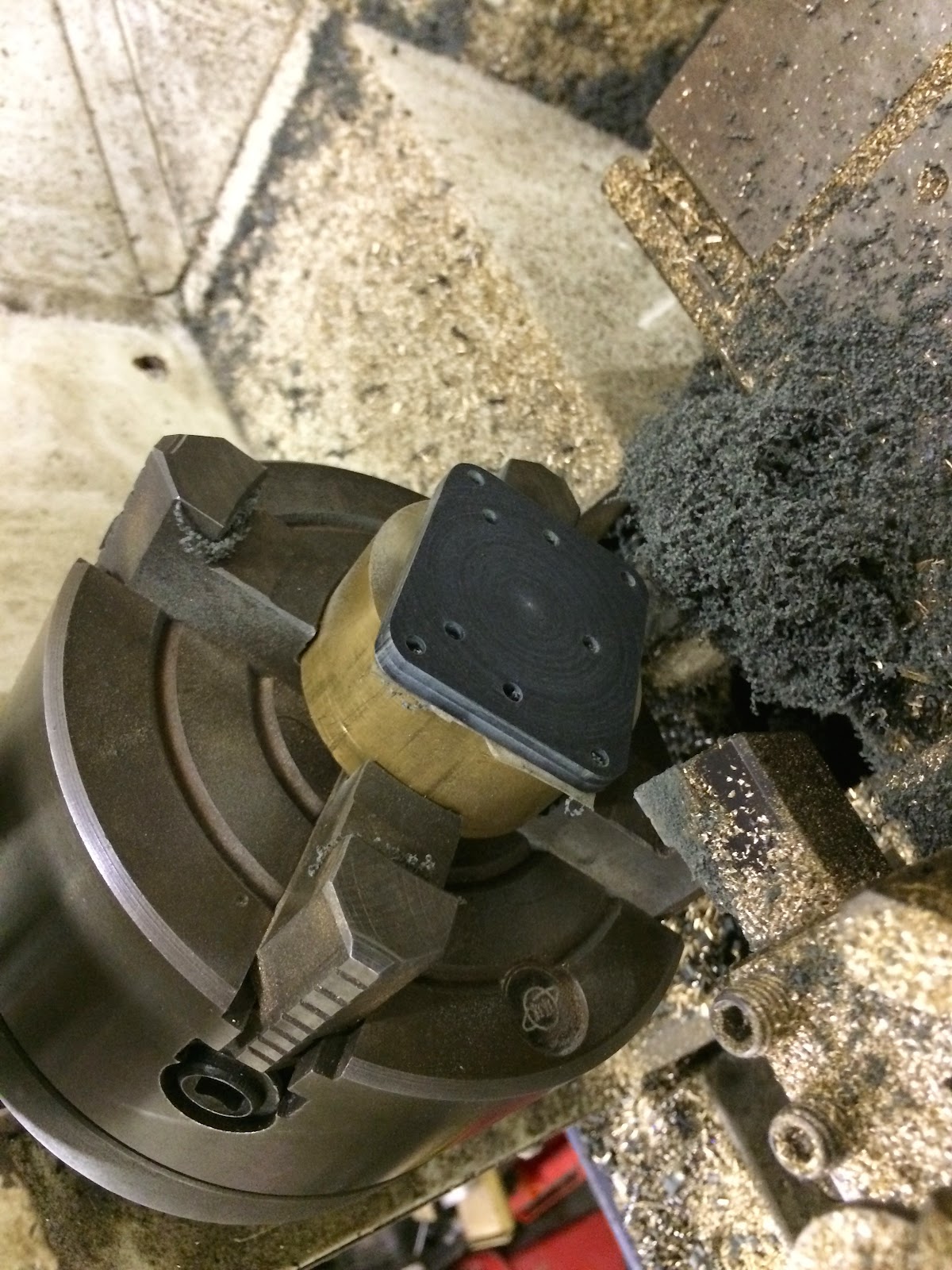 The contacts were originally copper. I made a little bending jig, and made some copper ones: 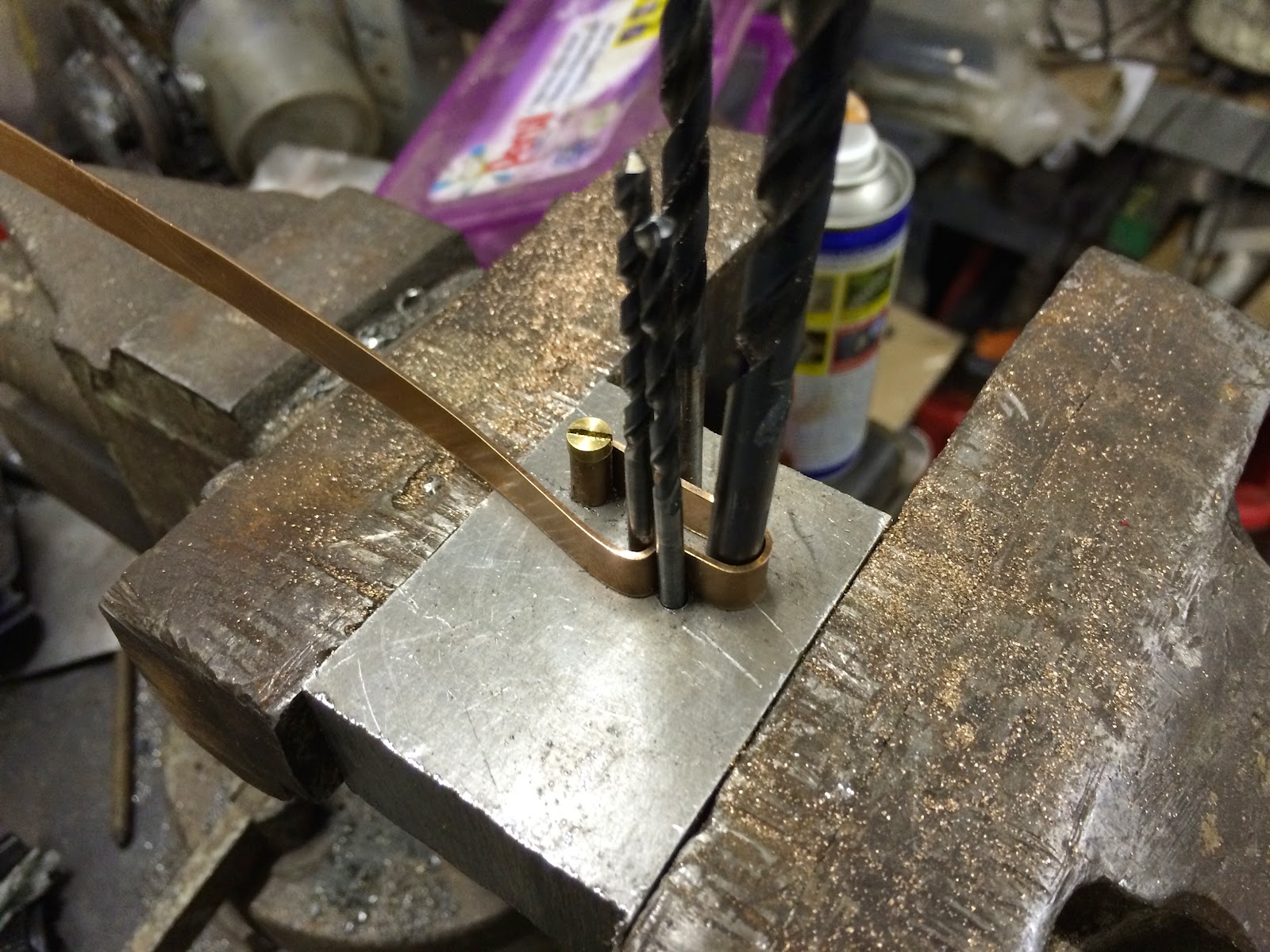 But they didn't work. The copper was too soft (originally they would have been "full hard" or even "spring temper" copper which I was unable to find a source of. In the end I switched to phosphor-bronze sheet, which works but is surprisingly very much less conductive.

To make sure that the contacts were the correct shape I made a special top cover with a window. 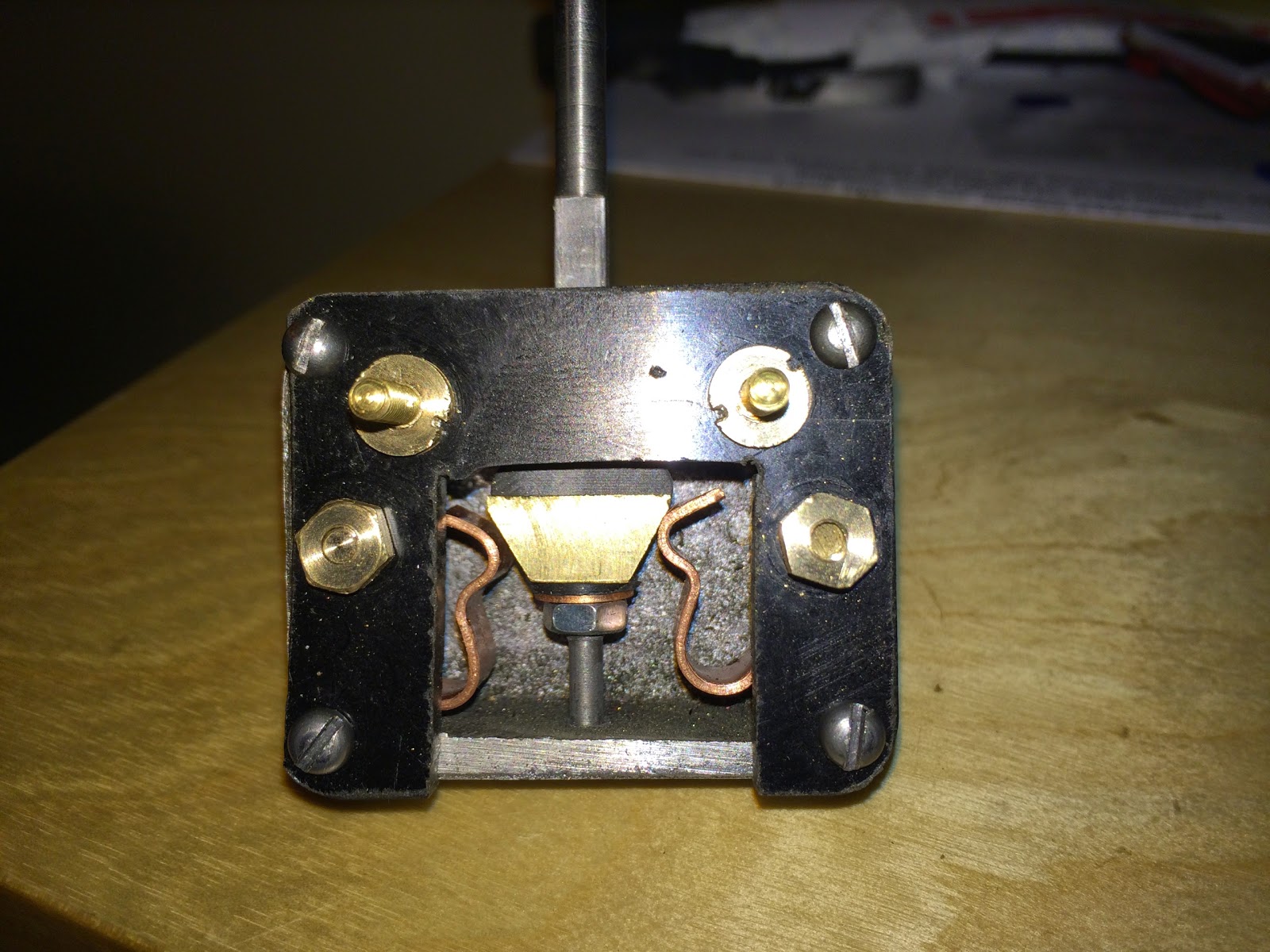 For all the clunky chunkiness of the switch it actually turns off and on a bit sketchily. In the on position (shown) there isn't all that much contact pressure, and in the off position the contacts are only just clear of the brass block on their straight section. 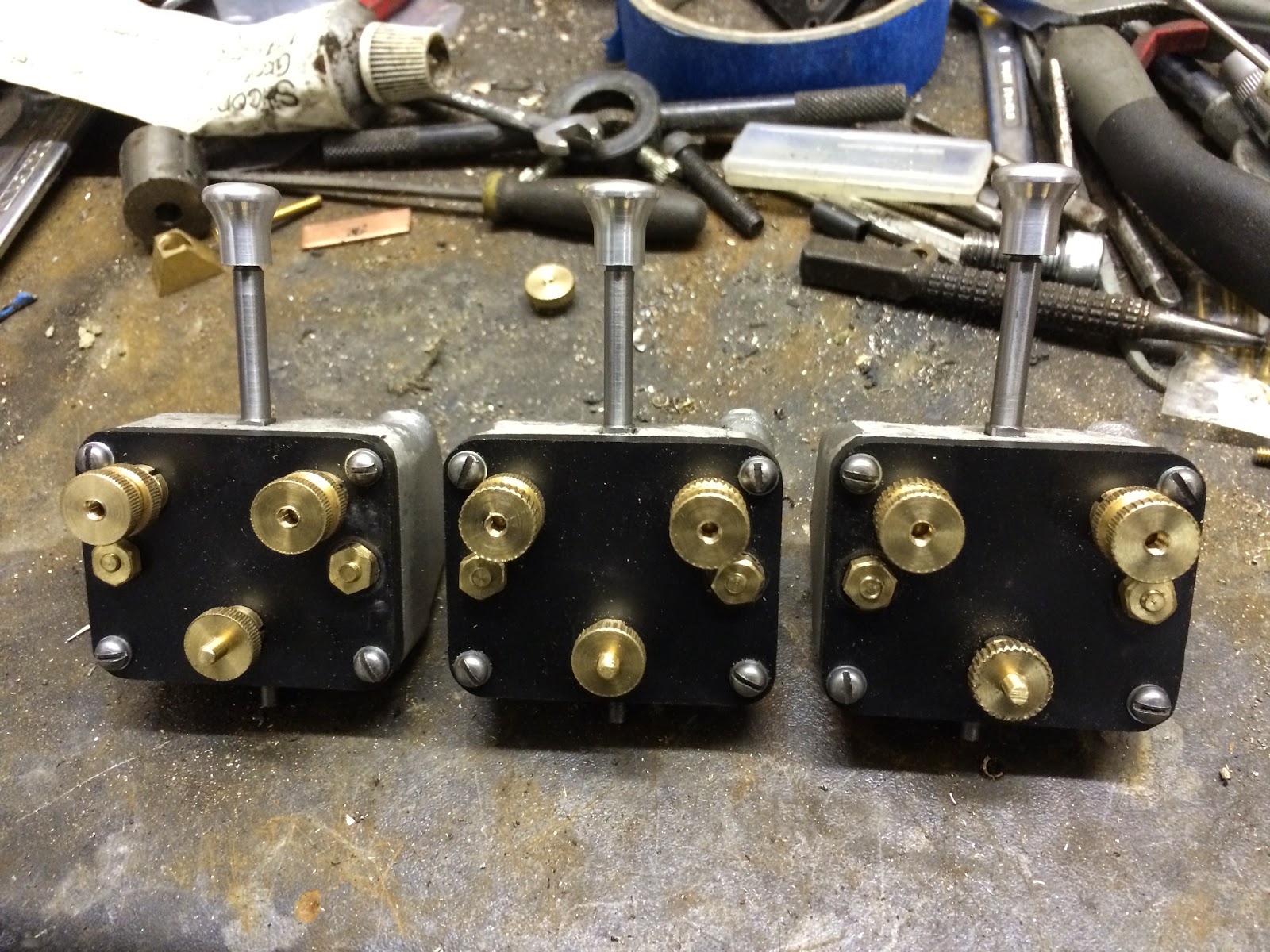 At the end I had probably the largest collection of Ner-a-Car light switches seen together for many decades.
This is the switch in-situ. It needs very strong fingers to operate it, and it is ideally situated to hook one's trouser legs immediately prior to attempting to put one's foot down. 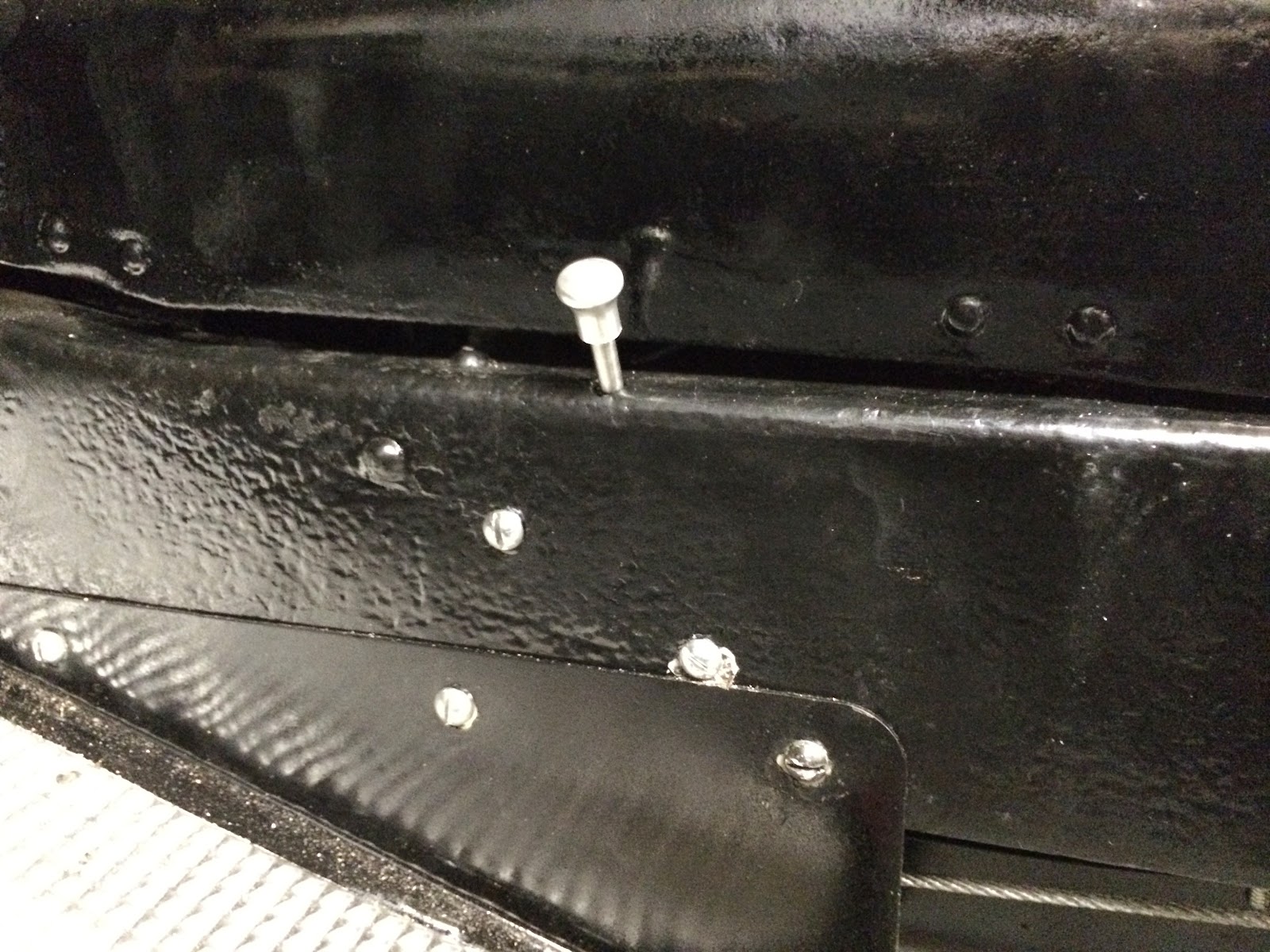 I wired the switch up with some rather nice period "Ross Courtney" connectors and some semi-authentic wire. 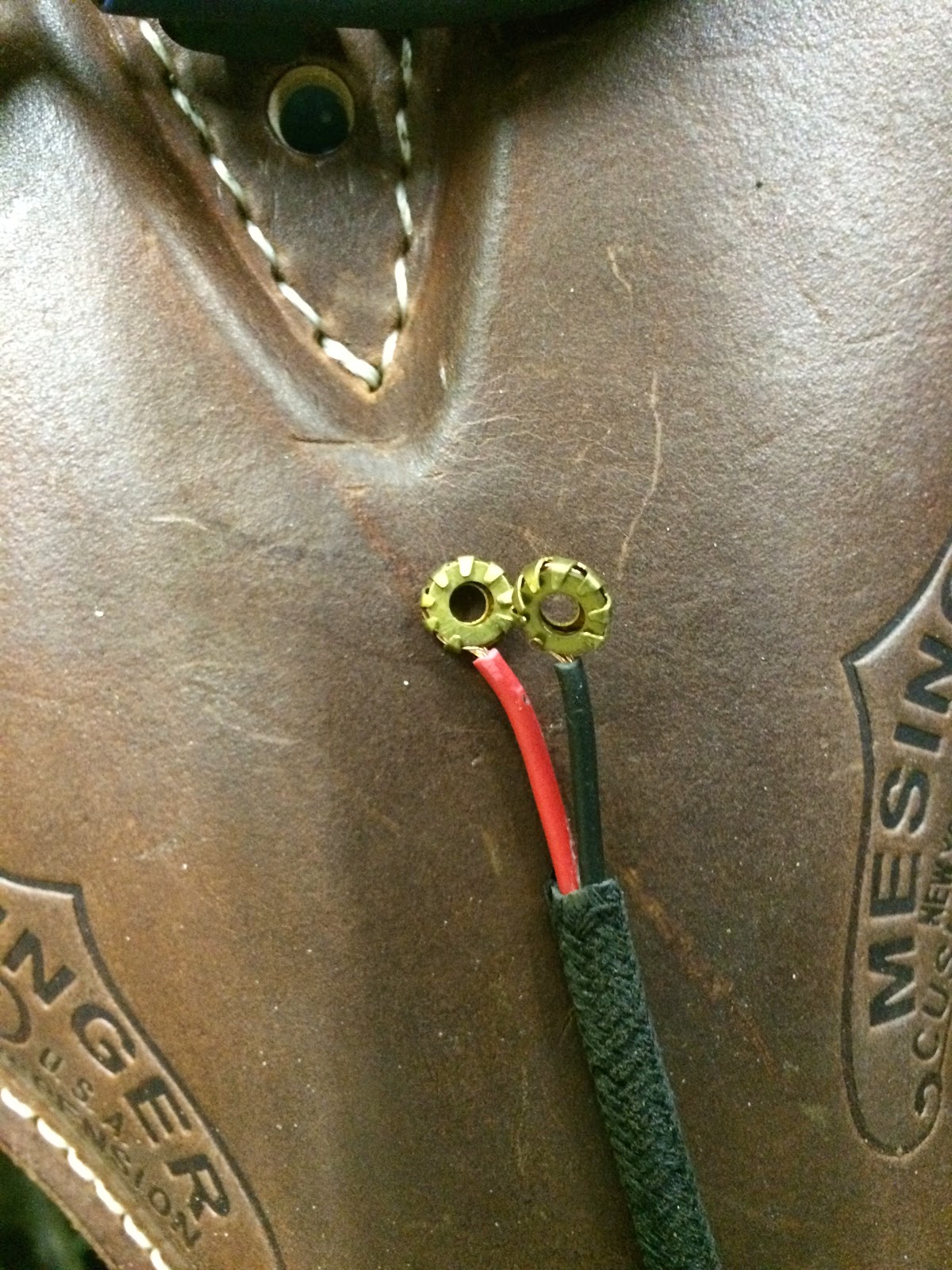 The original engine cover had been "repaired" in a rather ugly way with a row of screws.
It looked OK in an "honest repair" kind of way, but didn't actually fit. 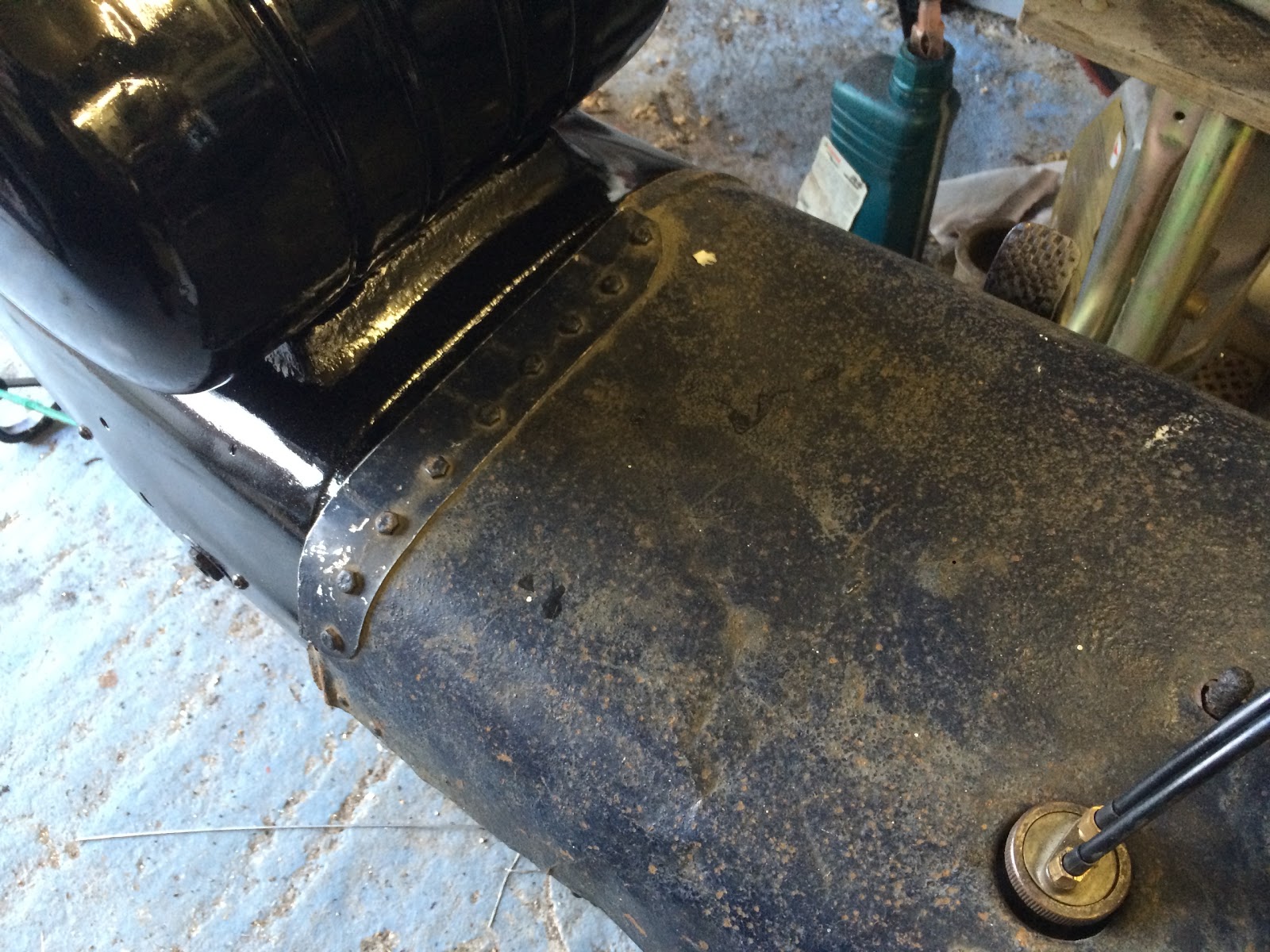 So I rolled up a new bit using the same rollers as for the fuel tank (in the same way) and welded it in. 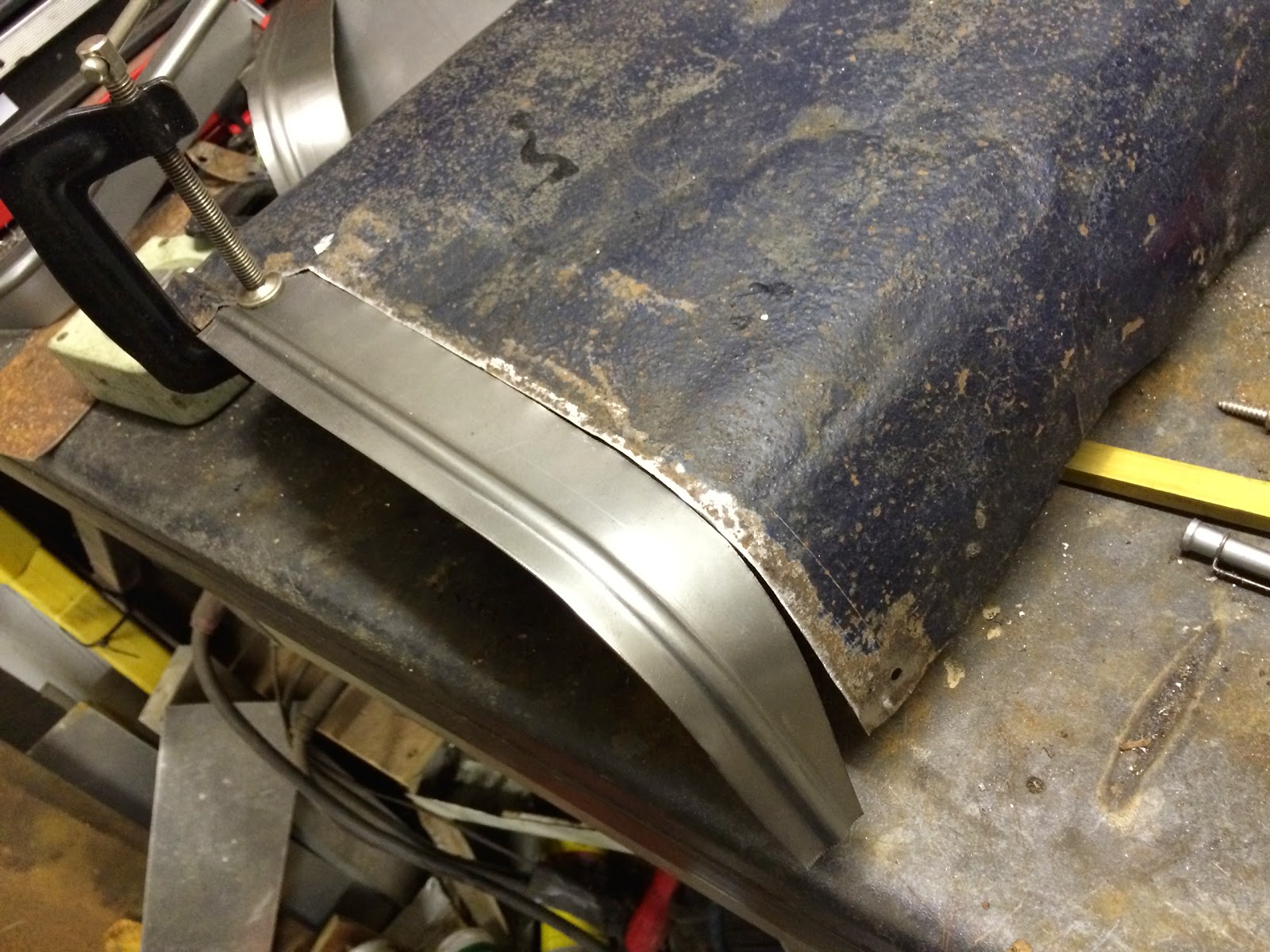 The cover was actually extremely thin, when stripped of paint it was semi-transparent. However with a bit of welding and filler it seems to look OK. 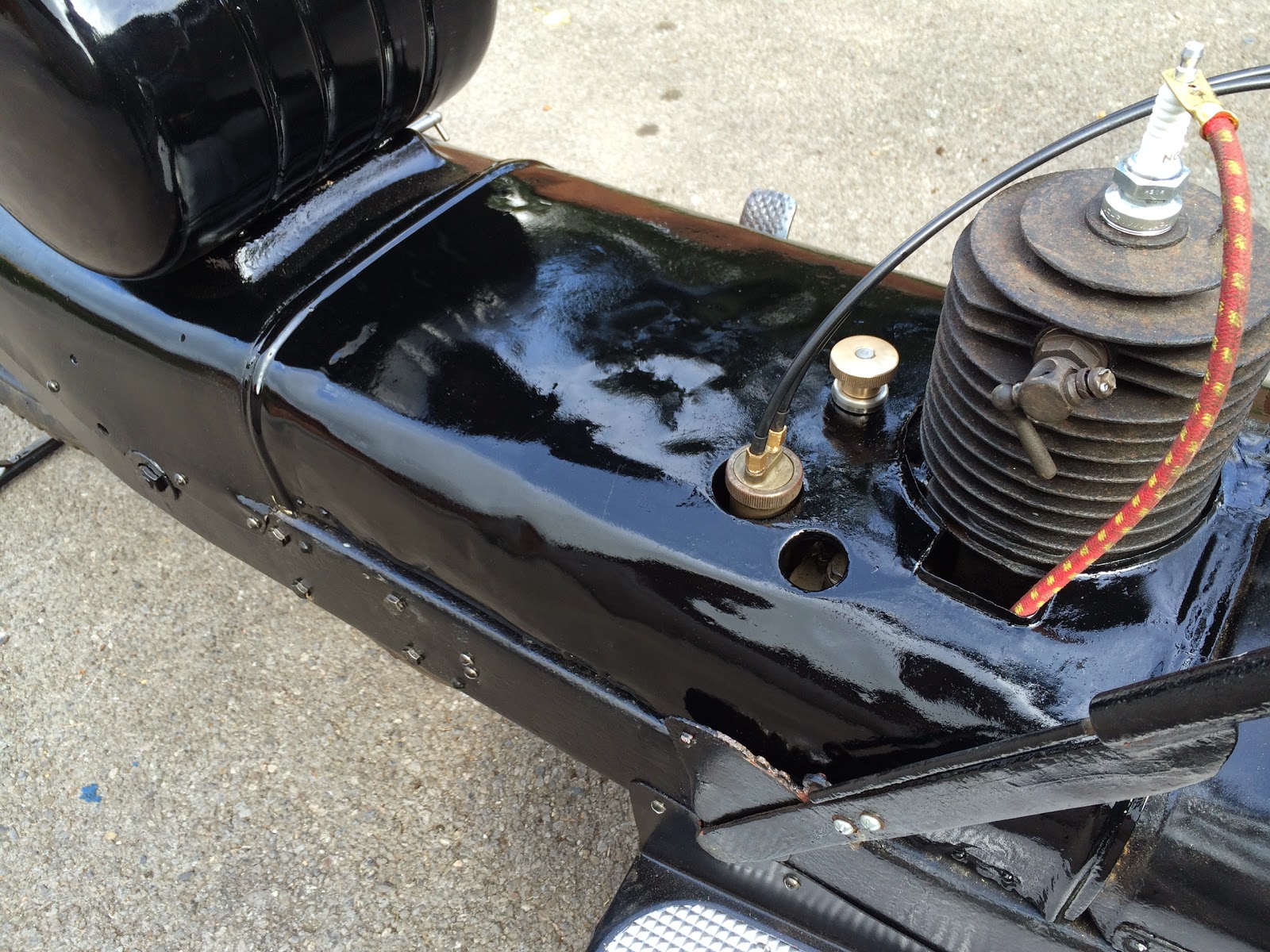 The engine on the Ner-a-Car is almost completely enclosed, and as well as the top cover there is an undertray.
I had one, but it was really in very poor condition. The photo doesn't really show how riddled with holes it is. As can be seen, I made a replica (but kept the real one) 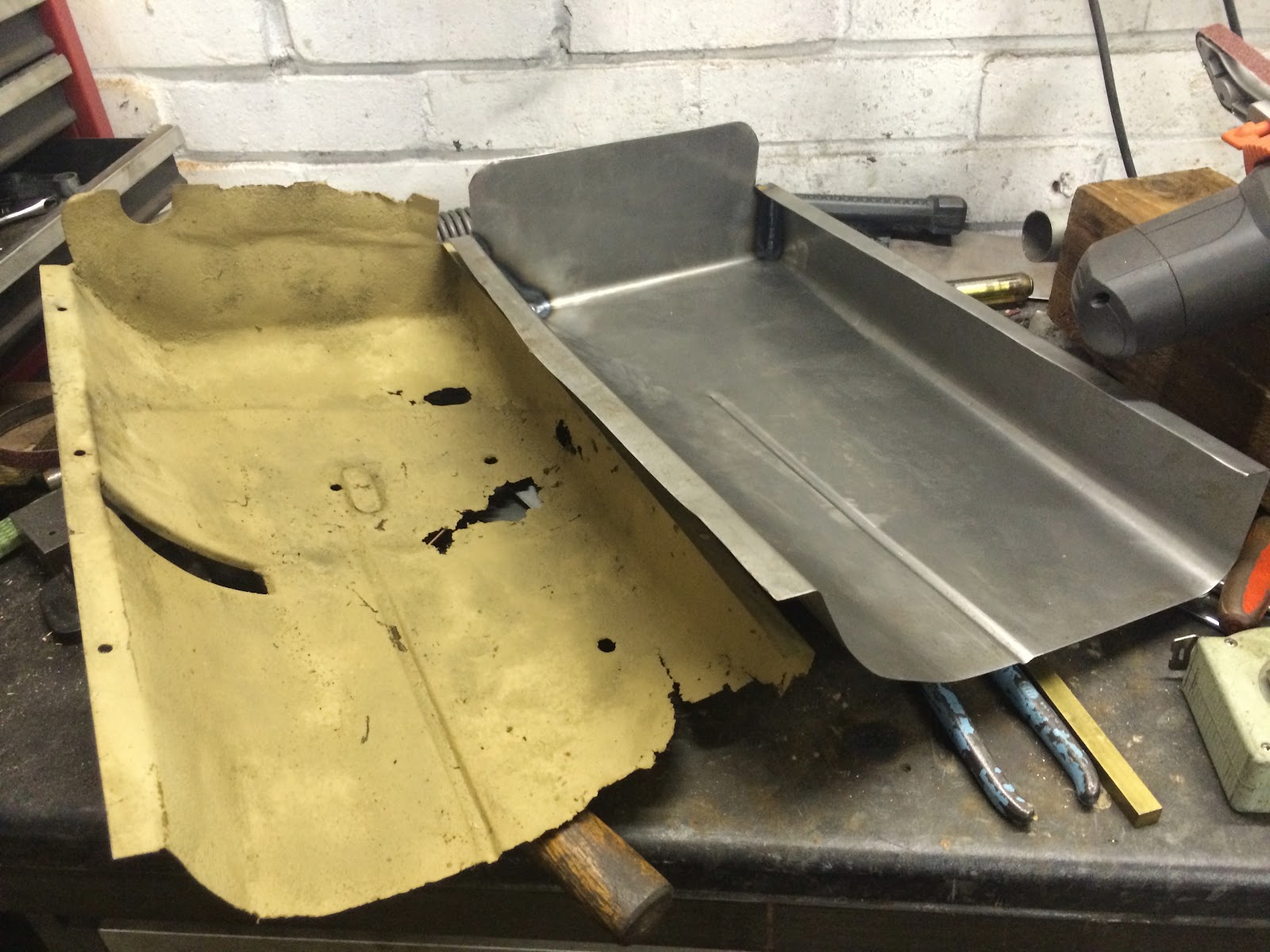 The under-tray makes assembling the machine about 10x harder. Some of the jobs are now just horrible.

How to register a vehicle with no VIN or chassis number

I tried to do some web research about how to register a vehicle like mine, with no chassis number while making sure to get an age-related plate, tax exemption and MOT exemption.

Firstly it is very much easier if there is a chassis number. The DVLA do not appear to have an exhaustive list of chassis numbers. This is a hint.

However, I didn't have a chassis number so the process is this:

1) Get a dating certificate from an owners' club. I got one from the VMCC and it took a little over a month.
2) Send off the V55/5 form. This is a paper form that you have to apply for on the DVLA web-site and takes 10 days to arrive. You can save time by sending for this in advance.
3) Return the V55/5.  You will need lots of supporting info, including an insurance certificate. You might need to shop around. Footman-James were adamant that a bike could not be insured without a frame number or reg number, Adrian Flux were happy to insure on the engine number. If you don't have a chassis number the form will come back to you with a new VIN to have stamped on the Chassis by a garage, a demand for the £55 new-registration fee (new VIN = new registration) and a demand for a NOVA declaration reference.
4) Send off for the NOVA paper form. This is an HMRC form for imports. You can do it all online, except if your vehicle isn't actually an import. In which case nothing fits and you need the paper form and a covering letter. This also takes 10 days to arrive, so send off for it in advance. You can read the HMRC guidelines and end up convinced you don't need a NOVA for this situation, and you would be right, but you do need a reference number and letter to prove it.
5) Get the chassis stamped then send off the NOVA letter, V55/5, dating certificate, photos, £55 cheque, letter confirming chassis has been stamped, proof of address, driving license photocopy and insurance certificate then wait 3 more weeks.
6) Shiny new V62 arrives with a registration number to use.

The Ner-a-Car chassis number wasn't stamped, which is how it was possible for it to get lost in the first place. It was an etched and stamped brass plate.
I made one using Press-and-Peel PCB making sheet from Maplin. I copied the original artwork in AutoCAD, then printed it from Inkscape, then etched it with Ferric Chloride. 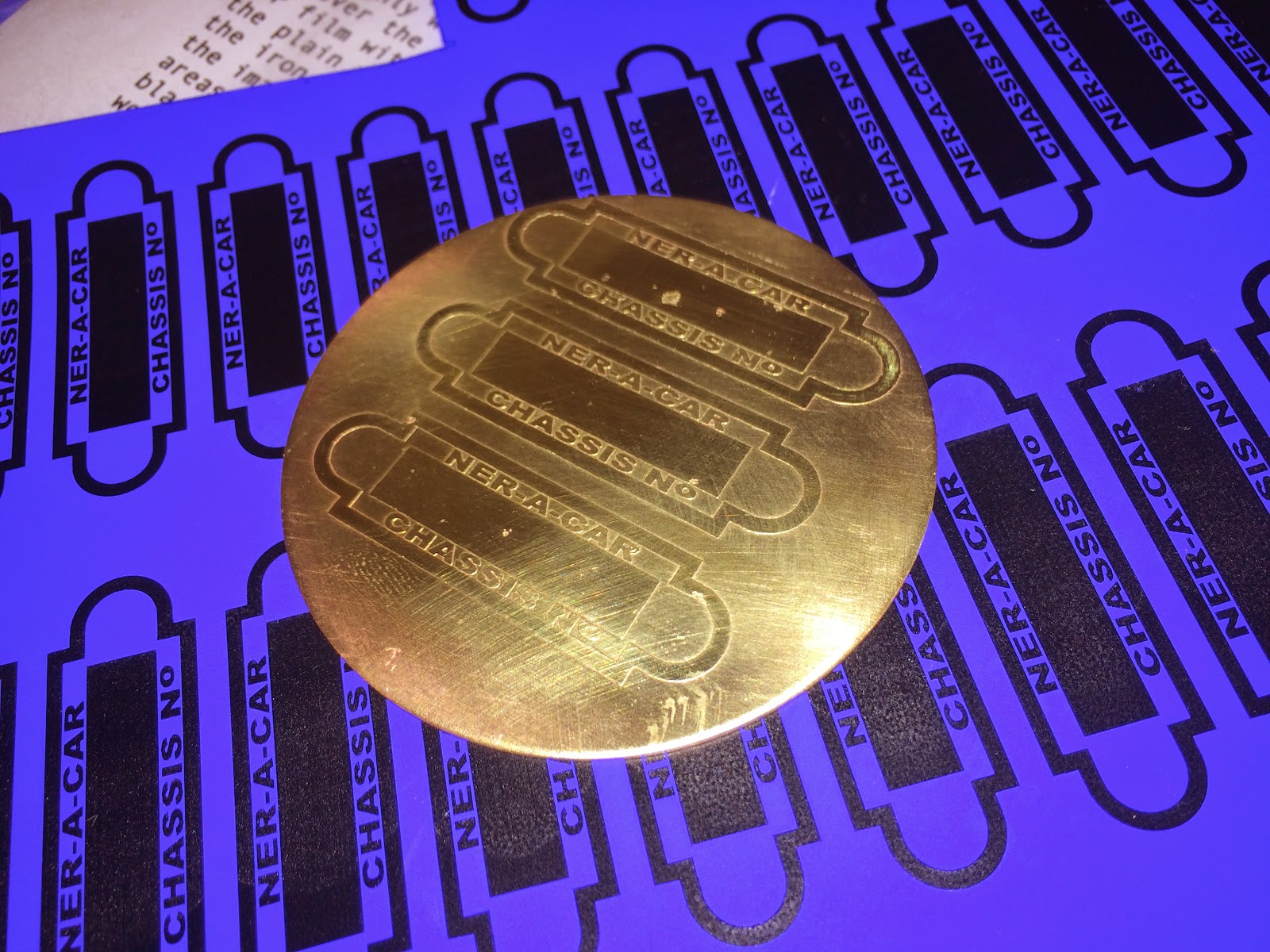 Once I had the VIN I engraved it on the plate. It barely fits. The original number would have had at most 3 digits. 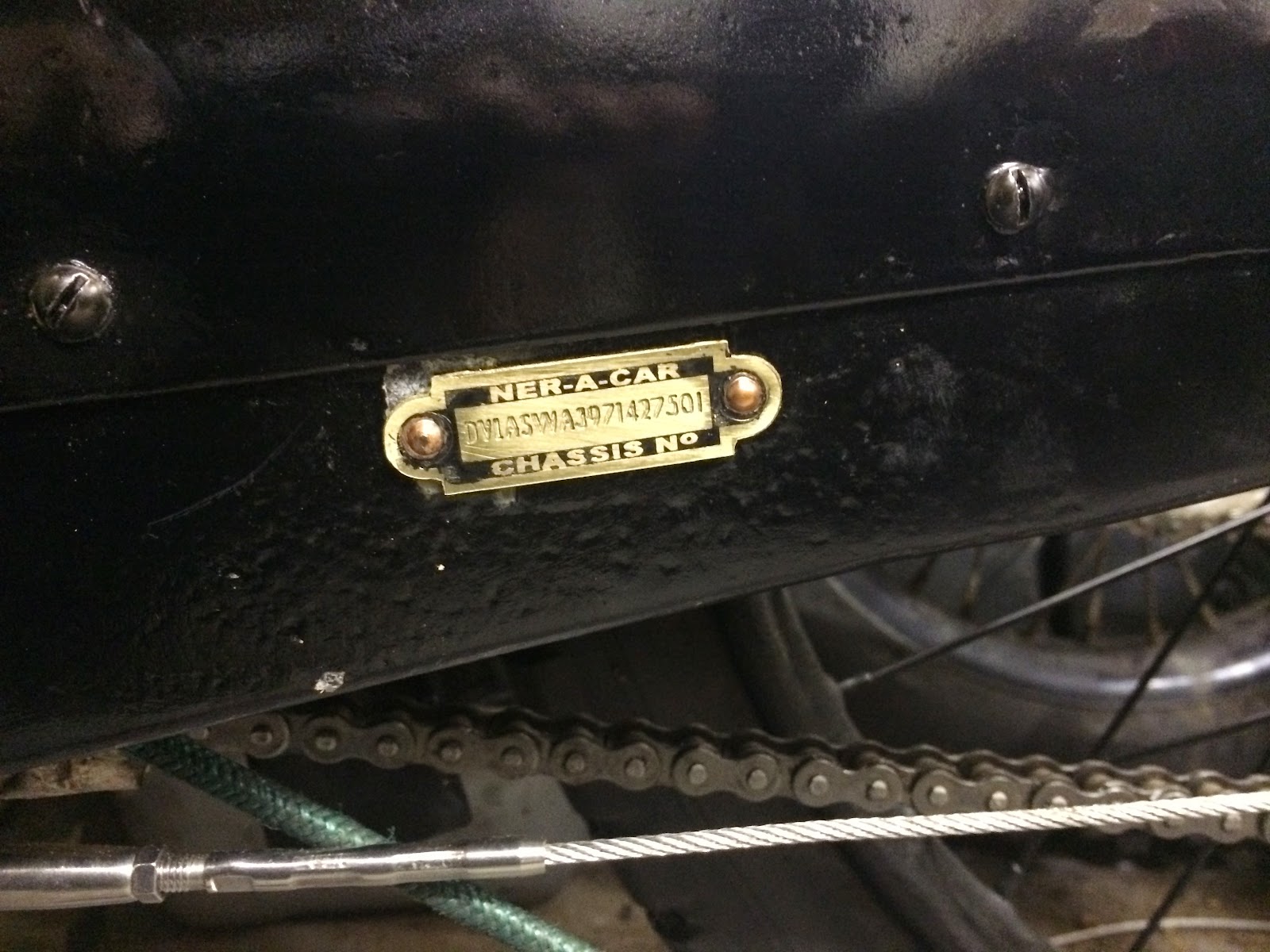 I managed to find the UK number-plate font online, and decided to use it. The number plates would originally have been signwritten in whatever style the signwriter liked, of course. I did find a signwriter who said he could do it, but then he stopped answering the phone and emails, so I gave up on him.
I printed out the number on label paper, then cut out the letters with a craft-knife. 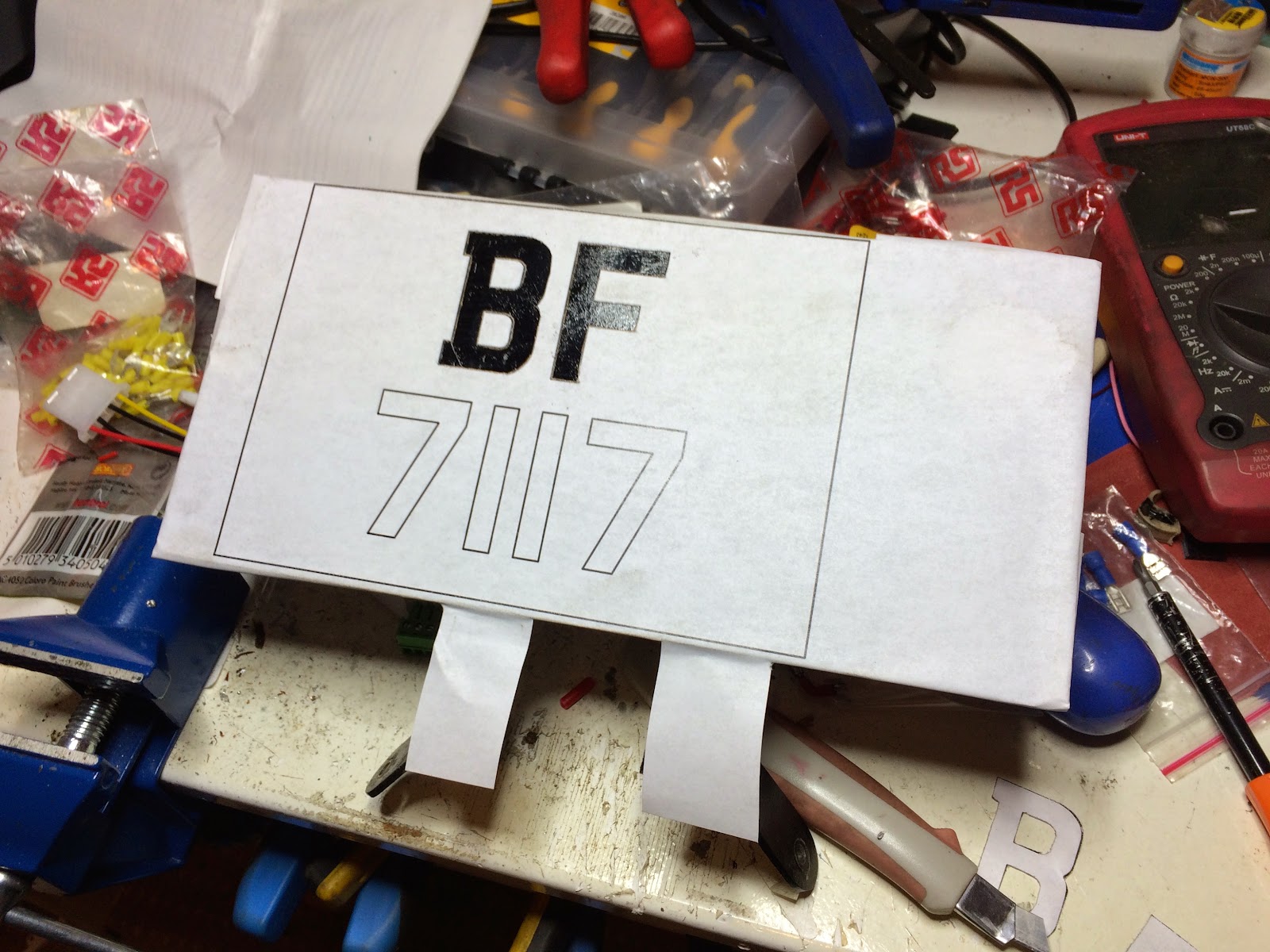 A quick spray with white paint, and I had some servicable number plates and a 100% road-legal bike. 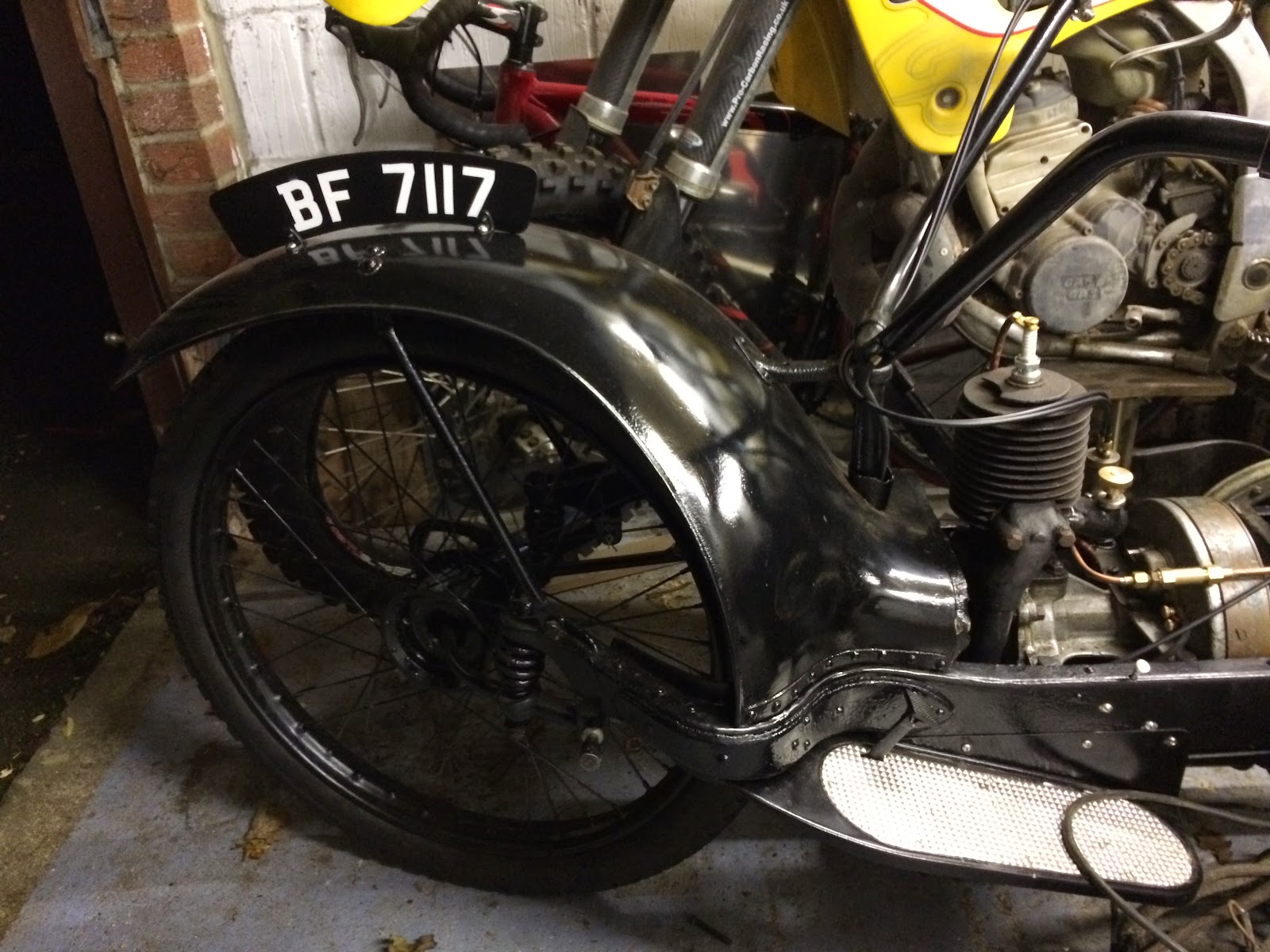 To celebrate I took it to a local WW1 aerodrome, where a photographer friend took some really nice photos.


On the way there the seat (leaf) spring sagged, so I had to heat-treat it. It was as-recieved O1 tooling plate, so this wasn't a huge surprise.  I did using the little tube-furnace I had made to heat treat some other parts, though I did need to temporarily extend it with a second tube and element. 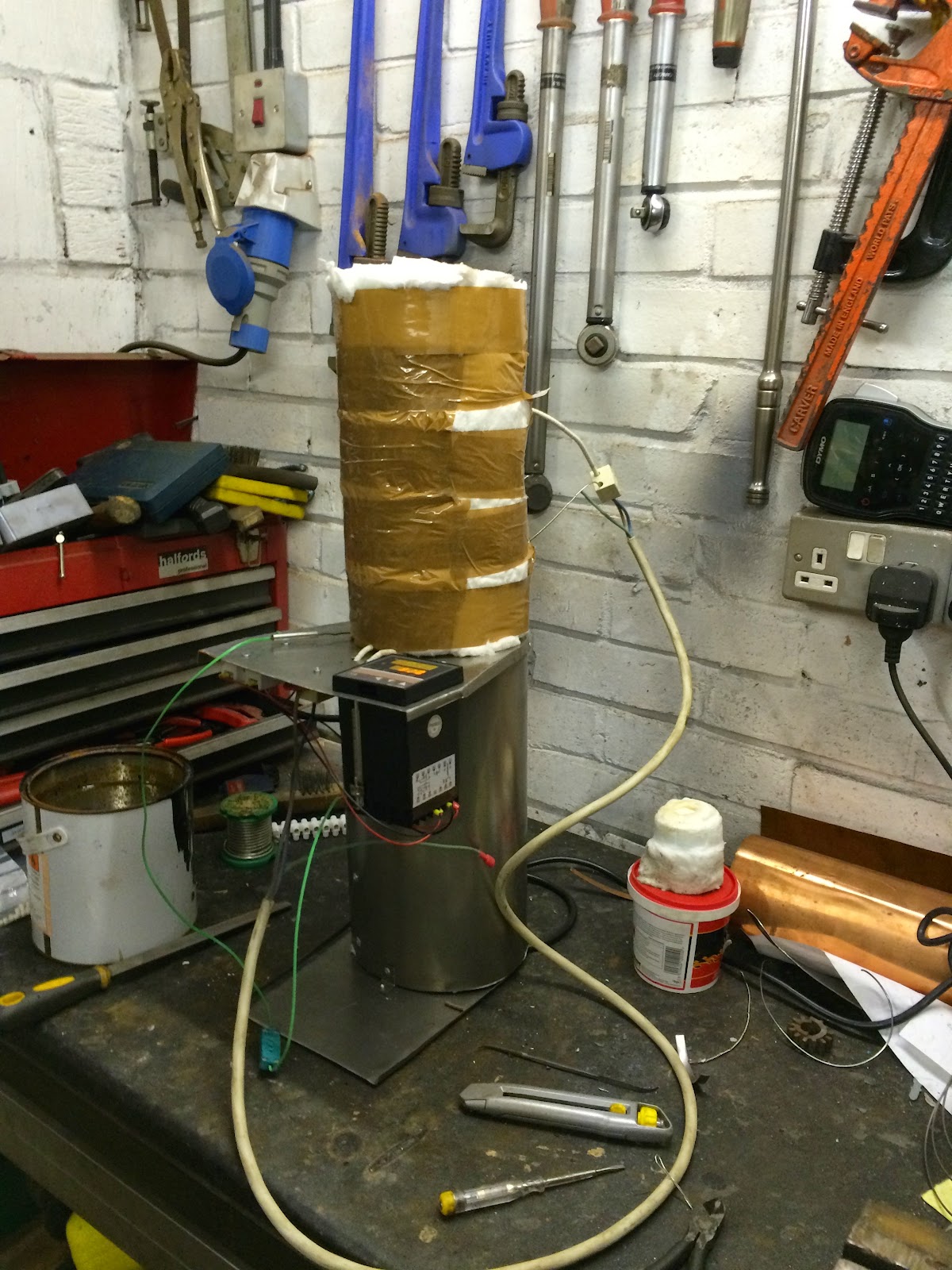 And here, I think, ends this blog. Unless I need to do something else, like make a piston.

Email ThisBlogThis!Share to TwitterShare to FacebookShare to Pinterest
Labels: Neracar, Neracar10 Finishing up