The Eyes Have It.

The Ner-a-Car was quite an early bike to have self-generated electric lighting, which is very convenient and taken for granted now. However it doesn't have a battery, so the lights go out when the engine stops. The road regulations of the time insisted that any vehicle had to be able to display lights all the time, so for that reason the bike was fitted with a "dual fuel" rear light and one electric and one acetylene front light.

Perhaps surprisingly carbide lighting is still popular with some cavers, and during my peak caving years in the 90s it was very much the preferred method. It gives a lot of pleasant bright light, and is nicer to cave with than the pencil-beam of an electric head torch. It is only in the last 10 years or so that LED lights have finally supplanted this Victorian technology.

You will have seen in previous instalments that I had found a correct combination acetylene / electric tail light on eBay. I had also made a light switch, and the rear light works nicely. The missing part was the front lights, and eBay failed to turn up any of those. Which wasn't a large surprise.

Luckily some previous owners had the same problem, and a set of patterns for metal-spinning new shells was available.  Metal spinning is an interesting and entertaining process, and is one of those techniques that once you have it "under your belt" very much increases the range of things you can make. YouTube contains many videos of the process, and it is perhaps surprising that such a hand-craft way of making things is commercially viable, but the tooling is so much cheaper than press tooling that it apparently still is. Of the YouTube videos one of my favourites is this one.

The patterns I received from another Ner-a-Car owner came with a number of fixtures and rings, which at first I couldn't figure out. One thing that was quite obvious was that the removable knob at the back of the pattern was for the lampholder of the electric variant.

I bought 12 150mm aluminium squares from eBay. I would have preferred circles, and I would also have preferred material in the dead-soft annealed condition, but I couldn't find any. I don't have a circle-cutter, so before every spinning attempt I had to anneal the sheet and cut it into a circle with snips. To judge the annealing temperature I scribbled all over the sheet with a green marker pen, then heated from the other side with a gas torch until the ink lost its colour. This seemed to work and avoided the danger of melting the metal. I nearly always remembered to remove the plastic protection film before applying the blowtorch too. 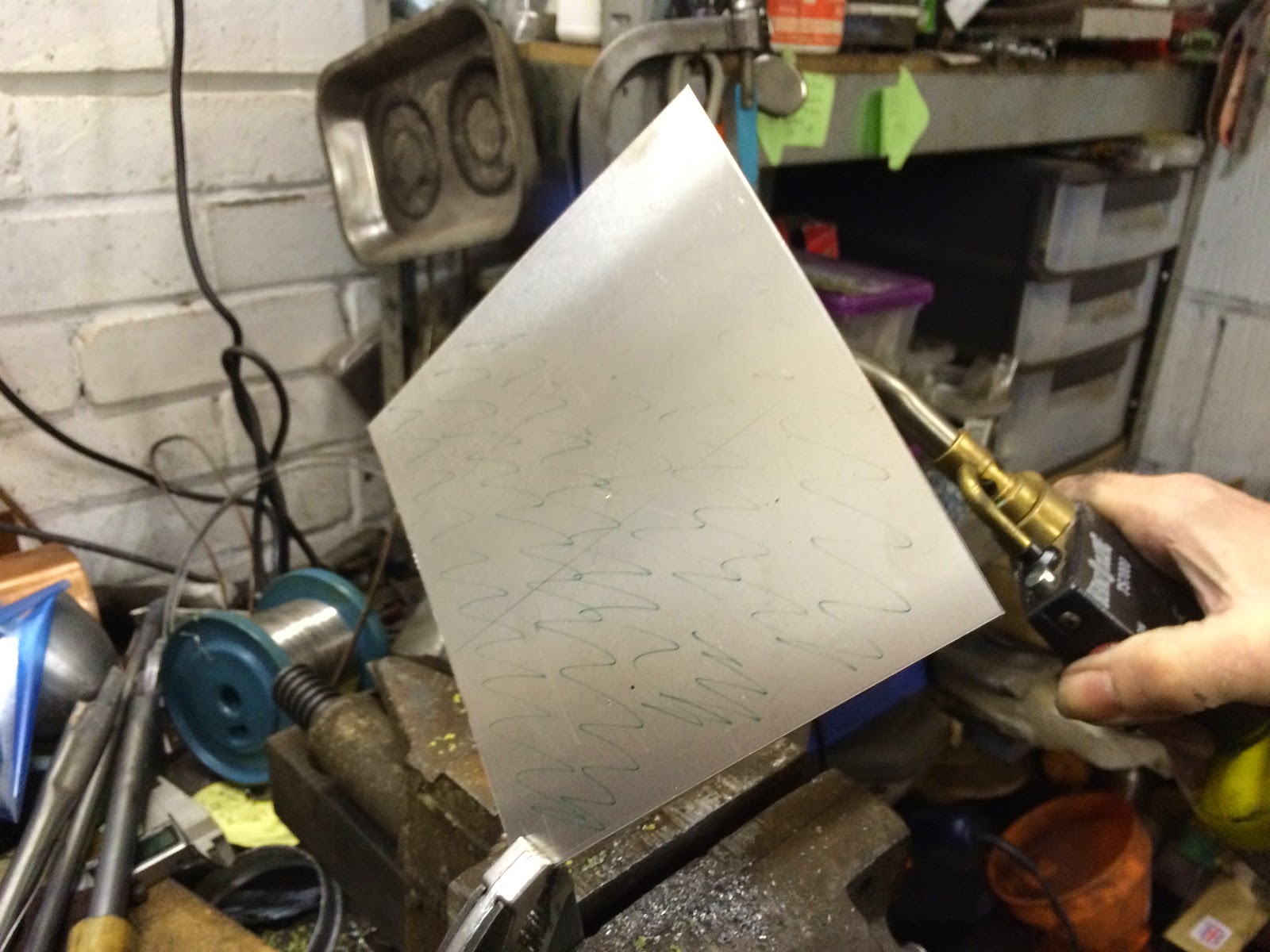 At the time I started this part of the job I was hoping to be able to ride to a VMCC meeting, but for that I needed lighting, so the electric variant was prioritised, and I started with one of those.
The first two attempts were dismal failures, the aluminium sheet fatigued and tore at the edge at the end of the lampholder spigot. I realised that this was because the forces at this point were rather high, and one of the extra bits of tooling in the box suddenly made sense: 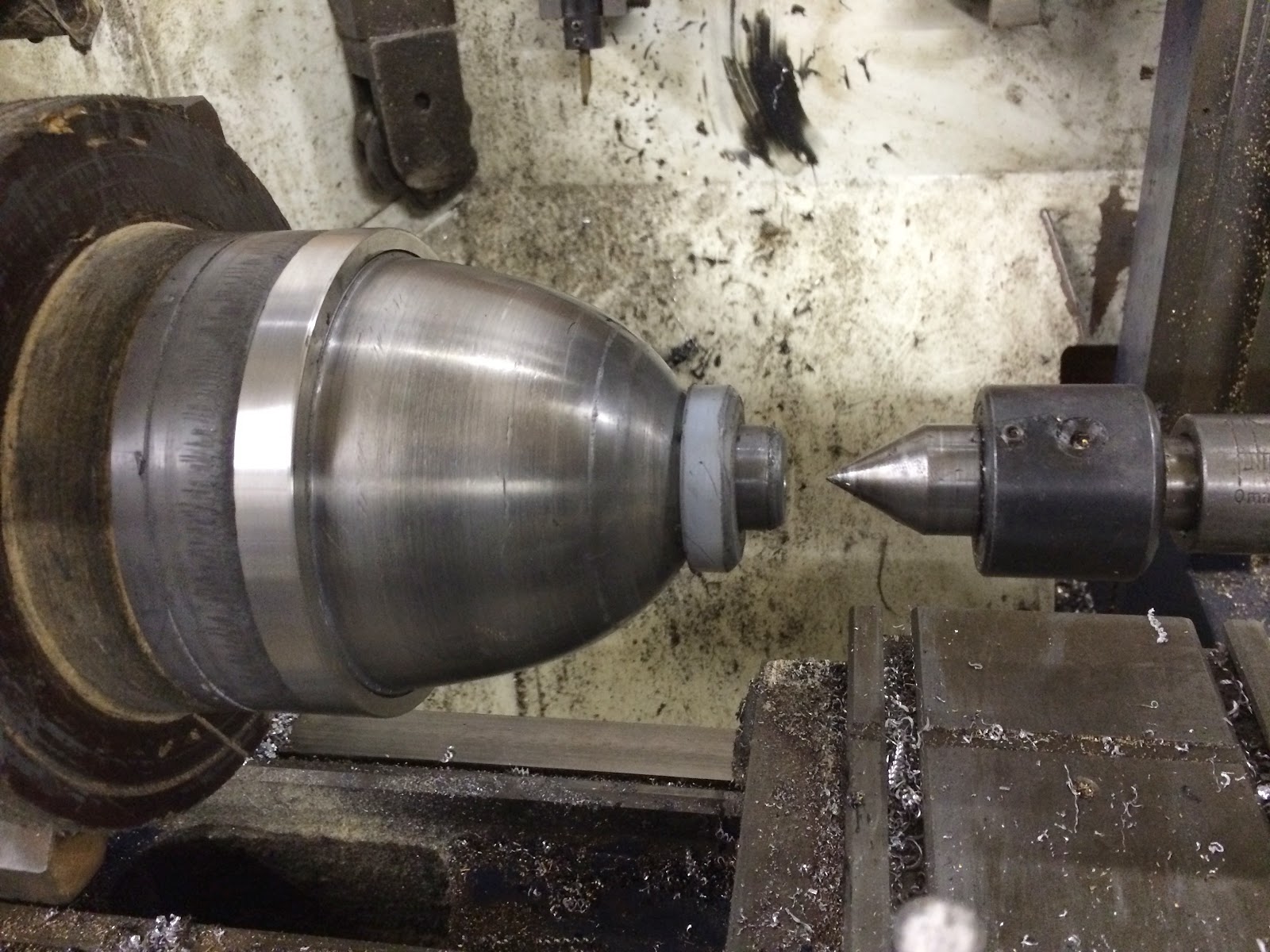 The nylon ring provides a surface to "set on" the material to reduce force at the spigot end. 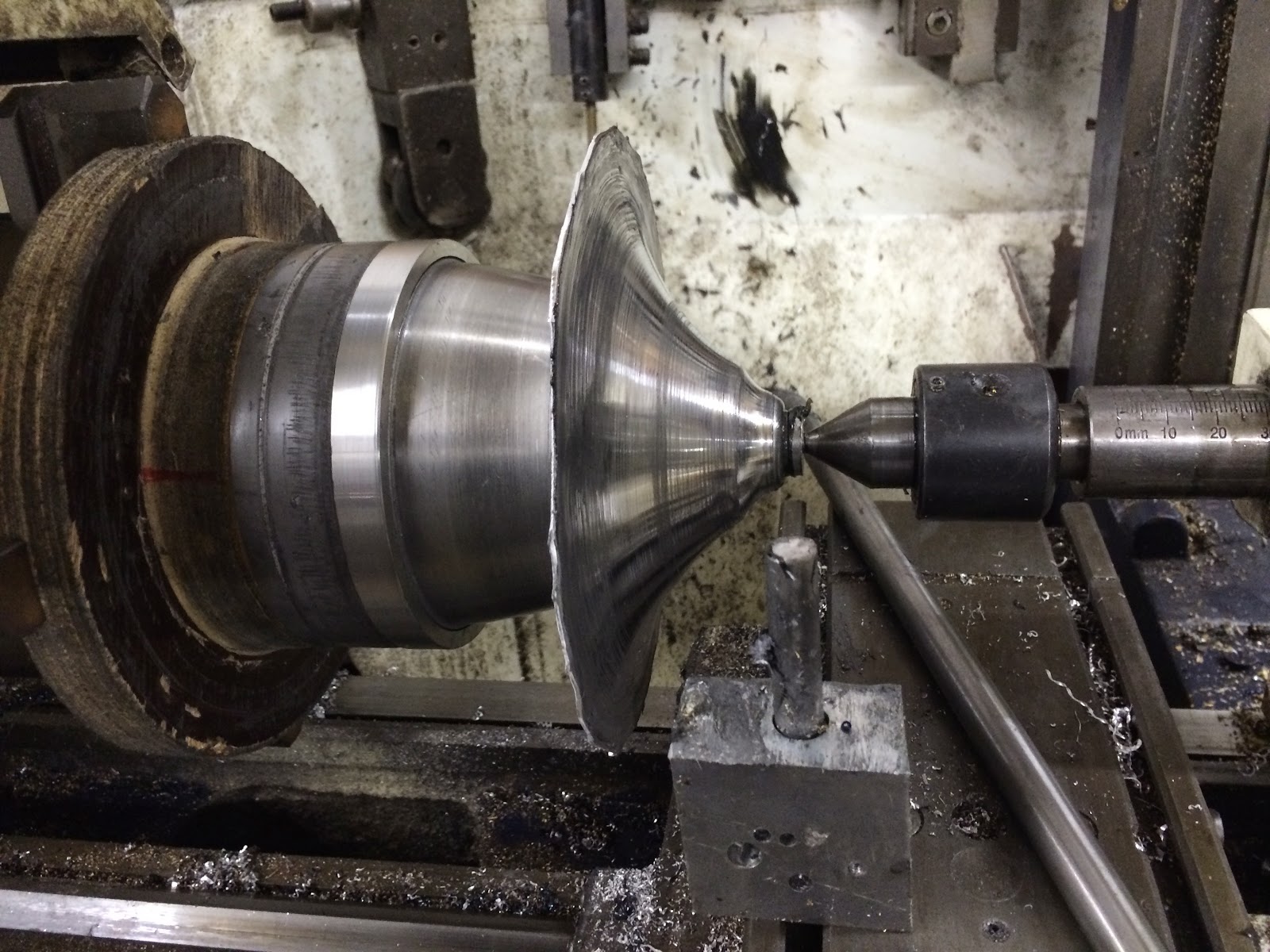 Then about at this point, with the material supported by the main body of the pattern you can remove the ring and complete the shape. 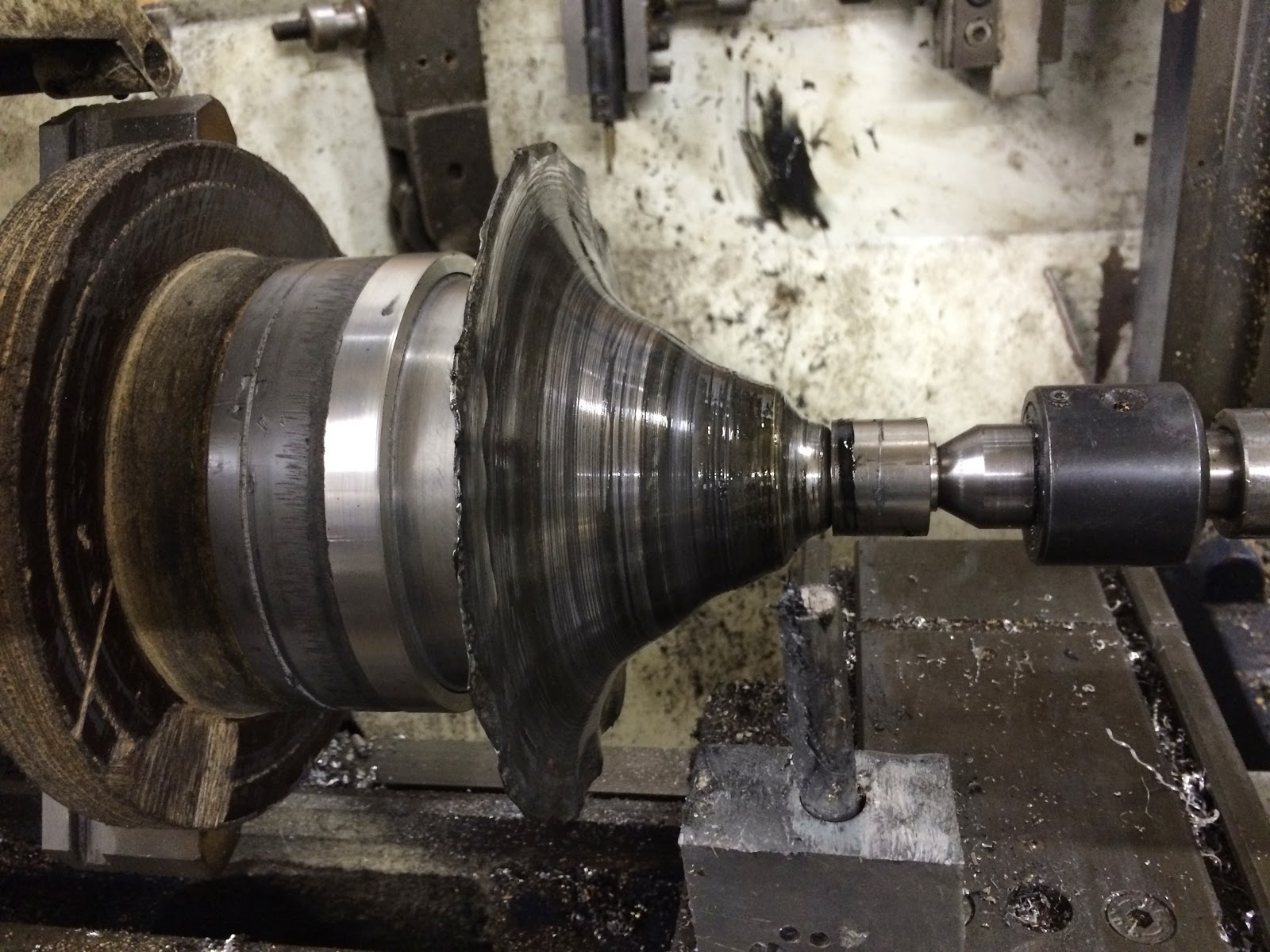 These lamps are a bit of an odd profile, near the bezel there is a thin vertical lip, then the bezel seat is at a reduced diameter. The photo below shows the first angle of the lip formed against a second removable collar 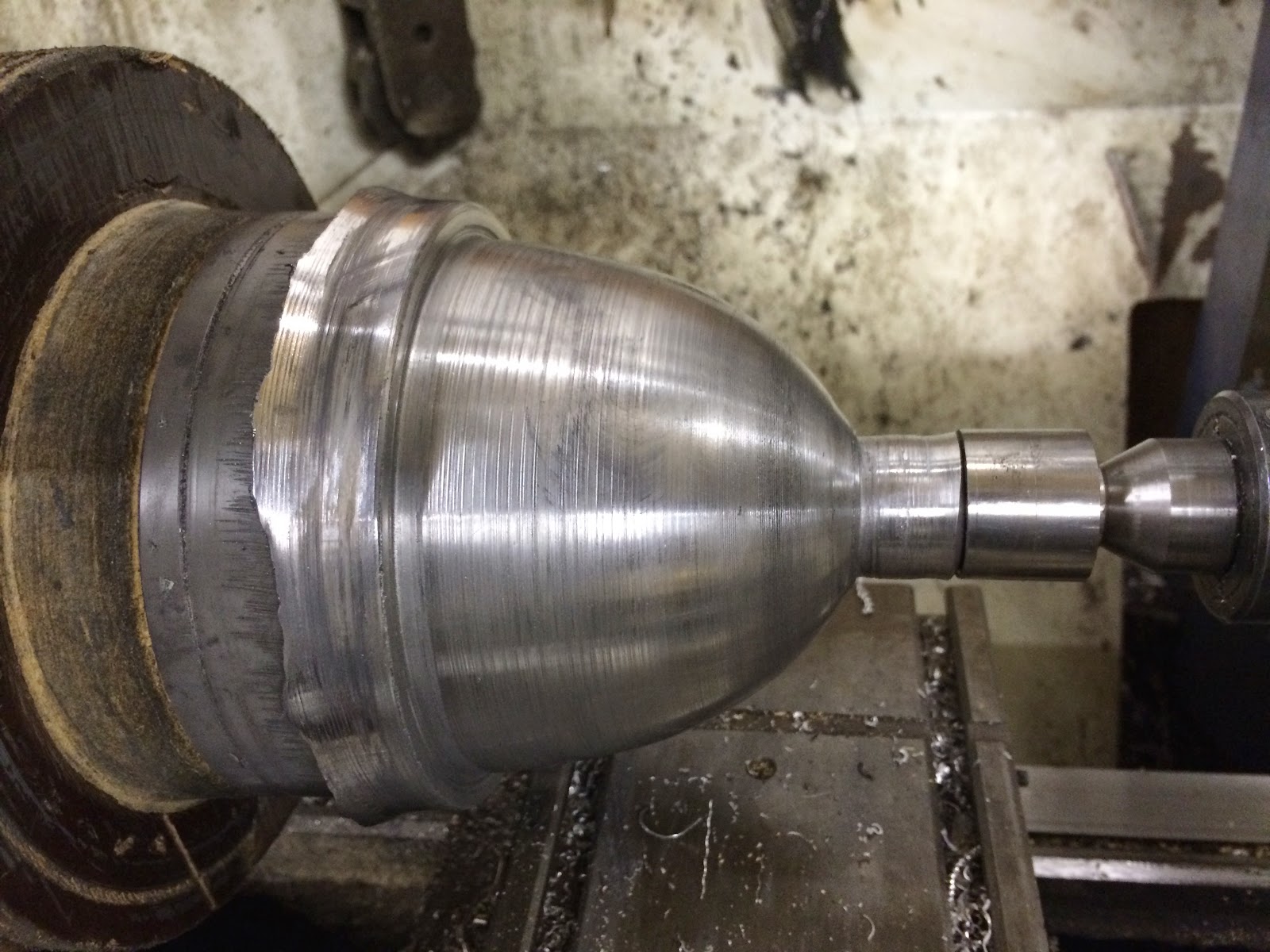 And then the collar is removed to allow further spinning to take the bezel seat to the required diameter. 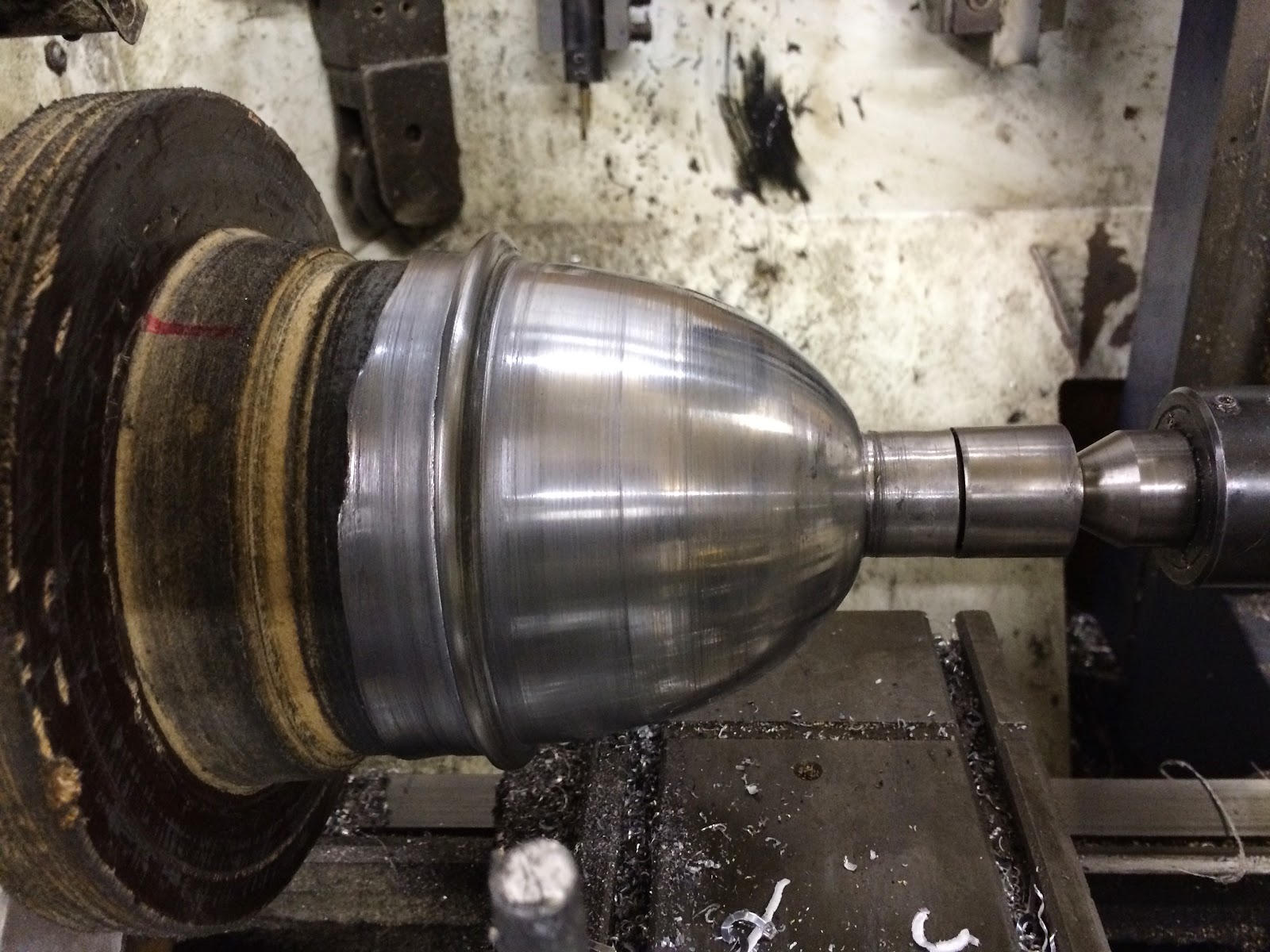 In the picture above you can see that the second operation on the bezel seat has deformed the lip. I really struggled with this and I have no idea how a pro would do this part of the process. I actually got quite frustrated and made a lot of scrap trying to get that part right without tearing the metal. 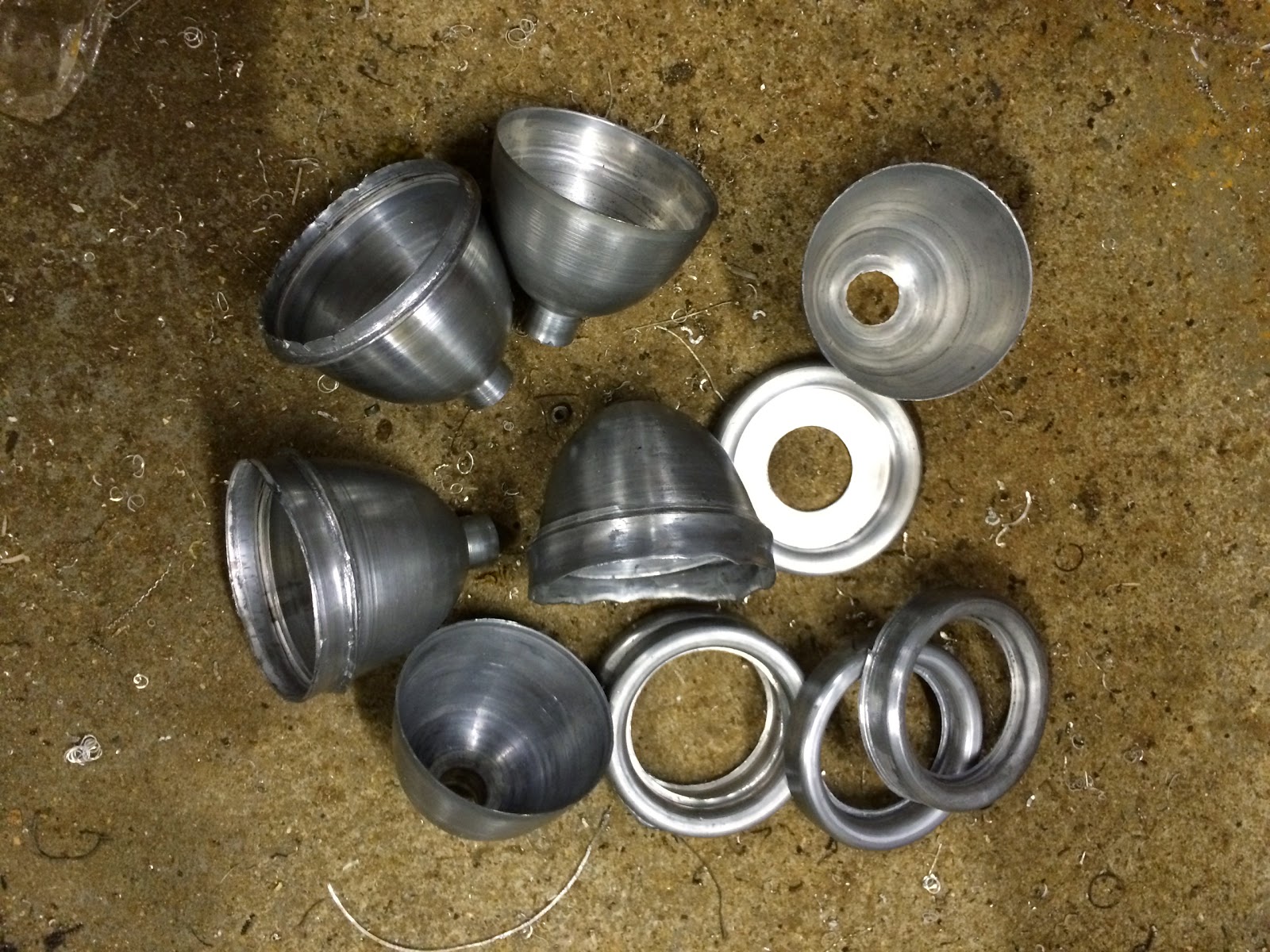 In the end I settled on using a big bit of tube to support the back-side of the lip. I would love to watch an expert doing it to see the "right" way. 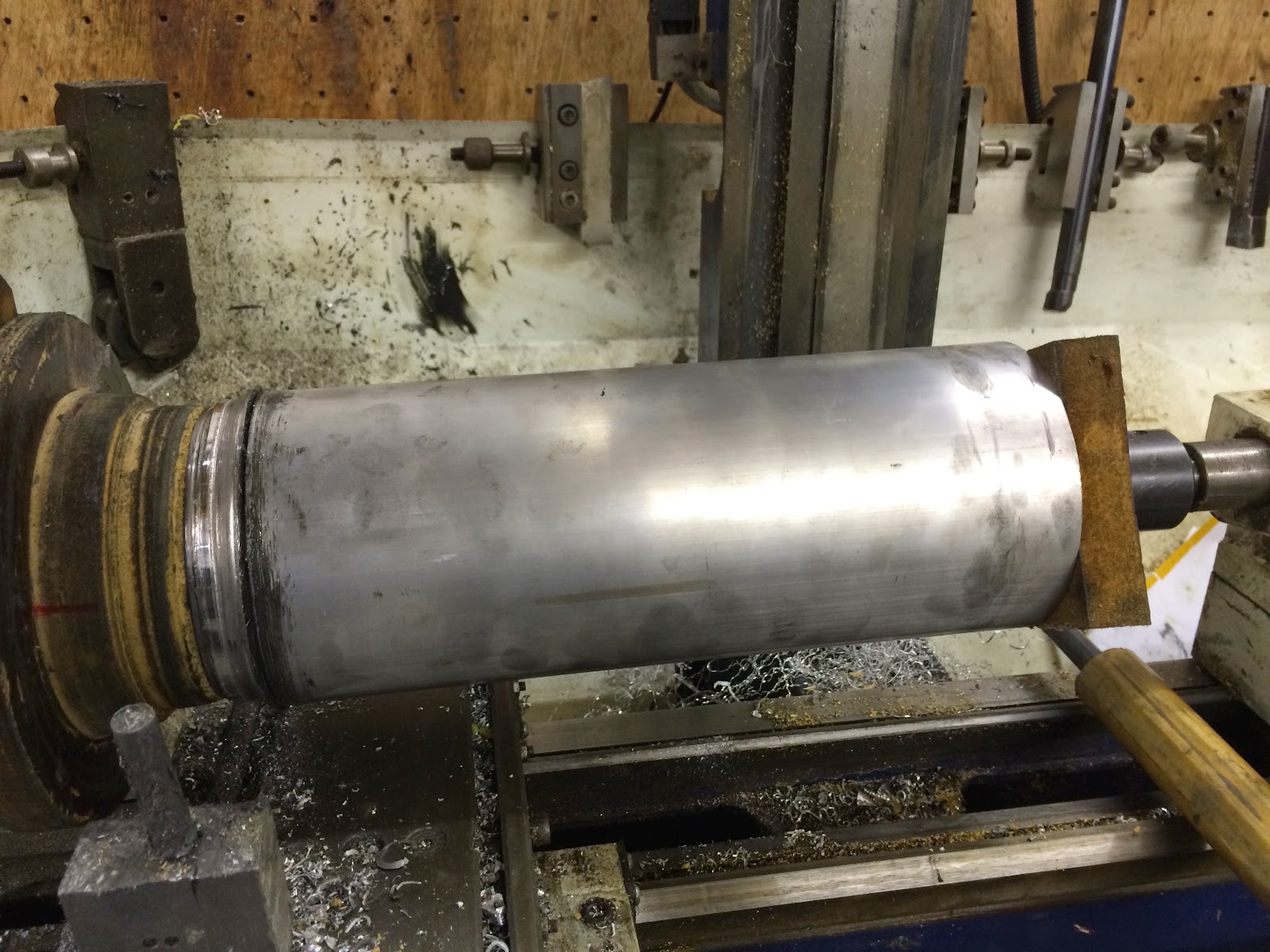 The next part to make was the bezel. I have looked at making lamp bezels before, but could not figure out how it is done. Once I saw the tooling provided it suddenly seemed obvious. The bezel form is double sided. You start off with a flat sheet in the position that the headlight glass would sit, then form the first curve against a former with the outside surface of the bezel against the former. Then you use the other side of the former (or a different one) to form the return curve. Finally you cut out the middle and replace it with something less opaque.

The original lamps had the glass retained by a spring clip held in a groove on the inner diameter of the bezel. The patterns did not attempt to reproduce this, as the part would be impossible to remove from the former. I decided to see if I could modify the pattern to also include this groove.

The trick is to make the pattern segmented, in the same way as top-hat moulds work. The rim former is made in 4 parts that screw to the main pattern, and can then be unscrewed to let the part come off of the former, and then the segments can be removed one at a time.

The photo below shows stage 1, with the clip-groove formed at a larger diameter than the rest of the bezel. 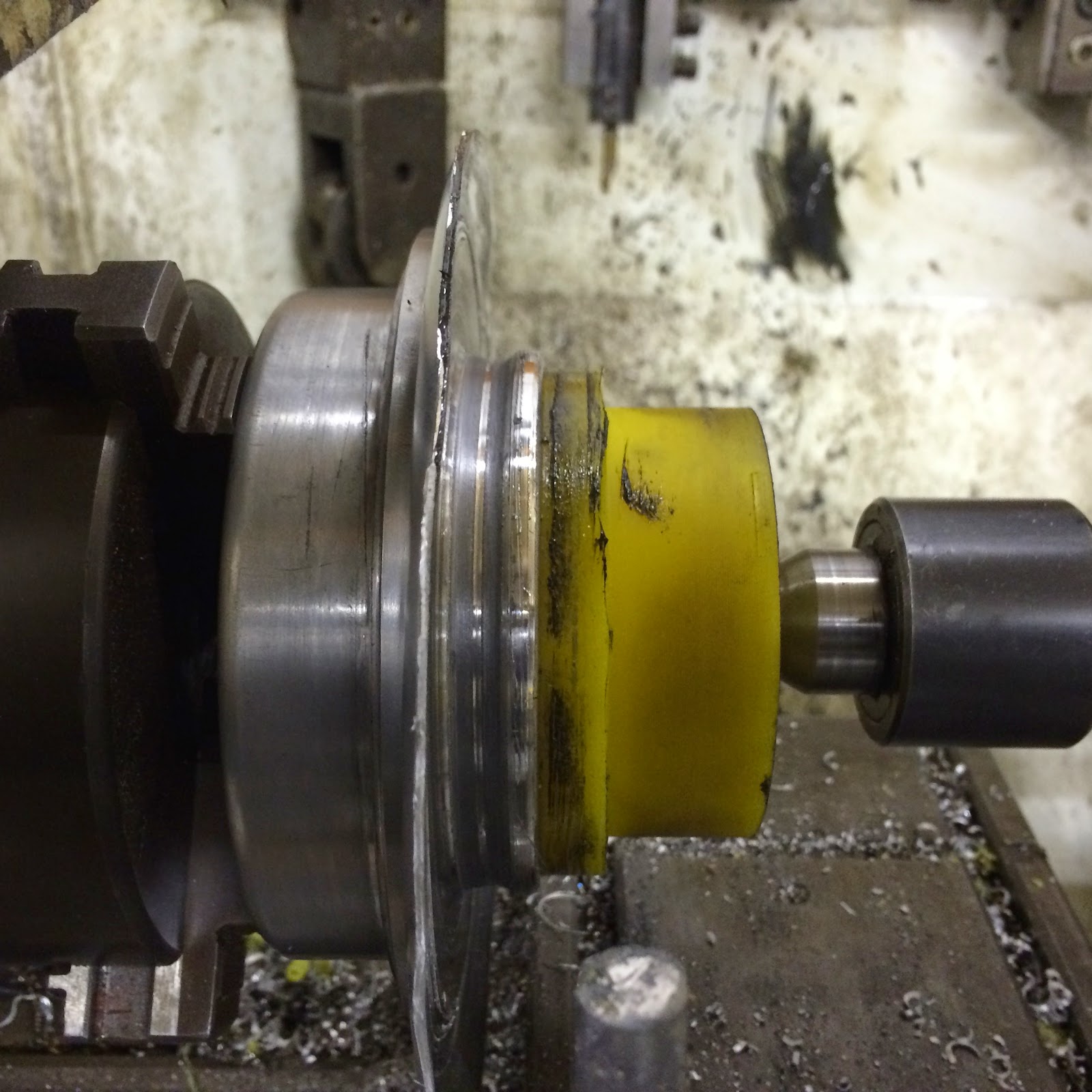 Then the middle has to be cut out with the trimming tool. Otherwise the screw heads can not be accessed. 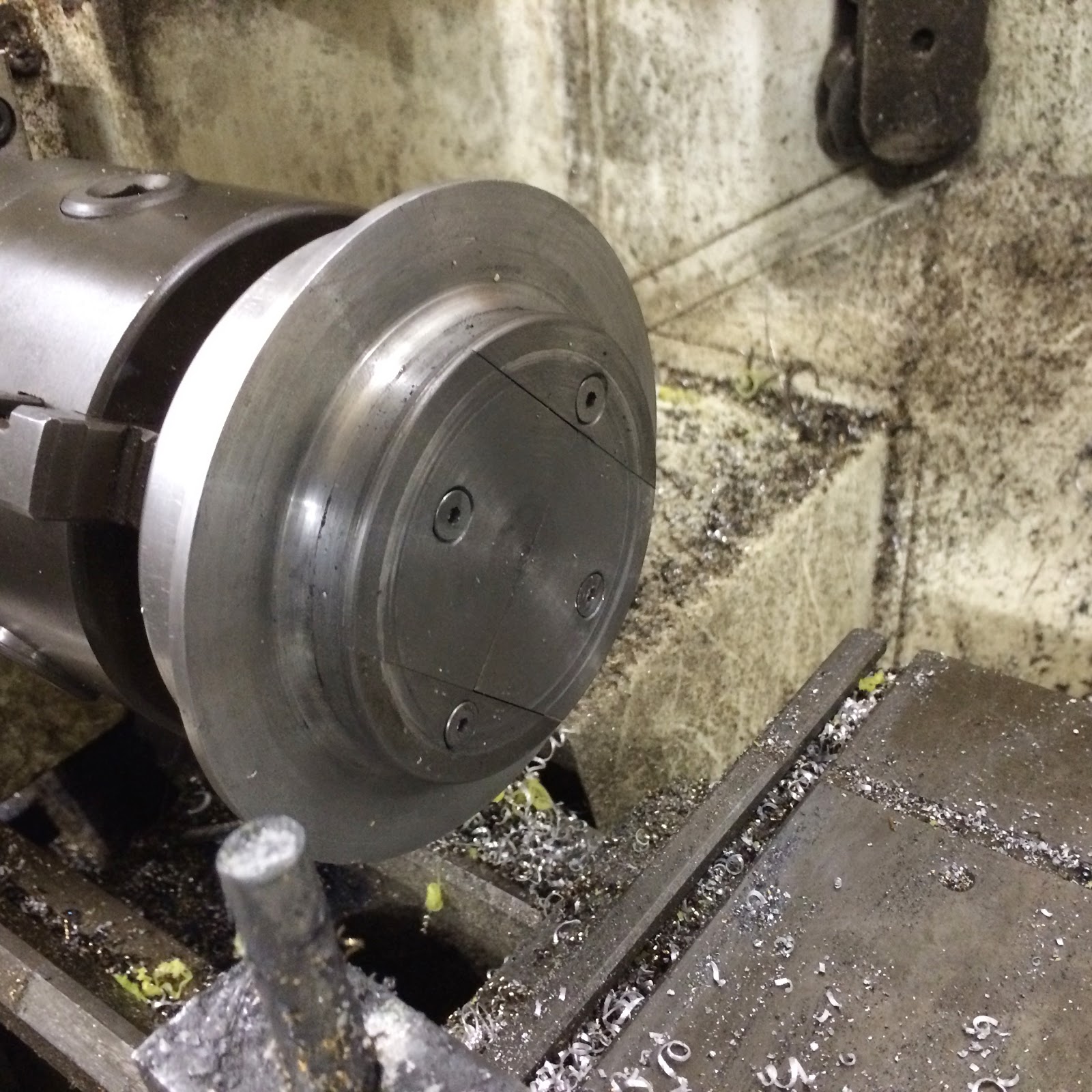 The screws are removed and the pattern and part reversed: 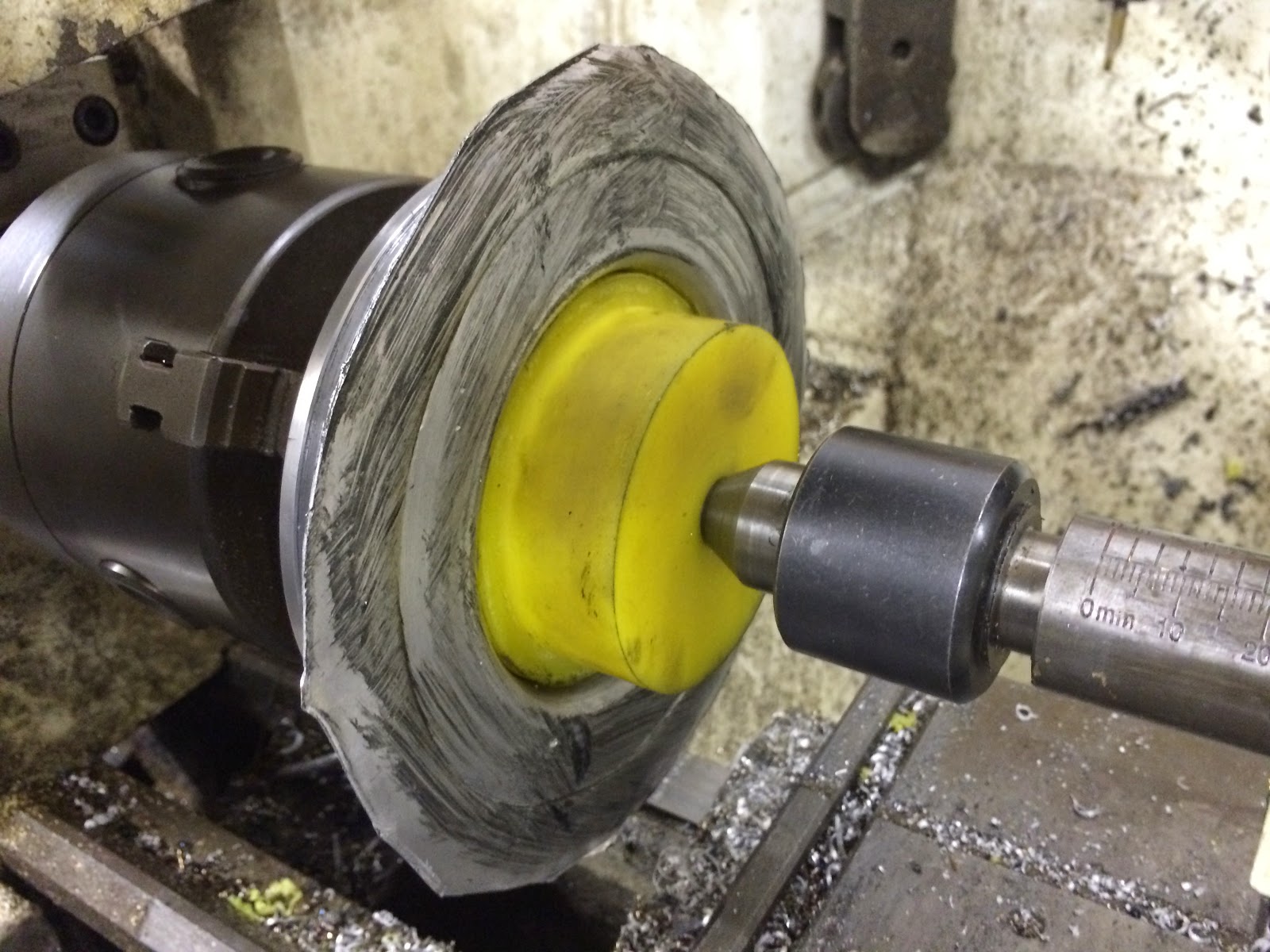 A clearer view with the push block temporarily removed. 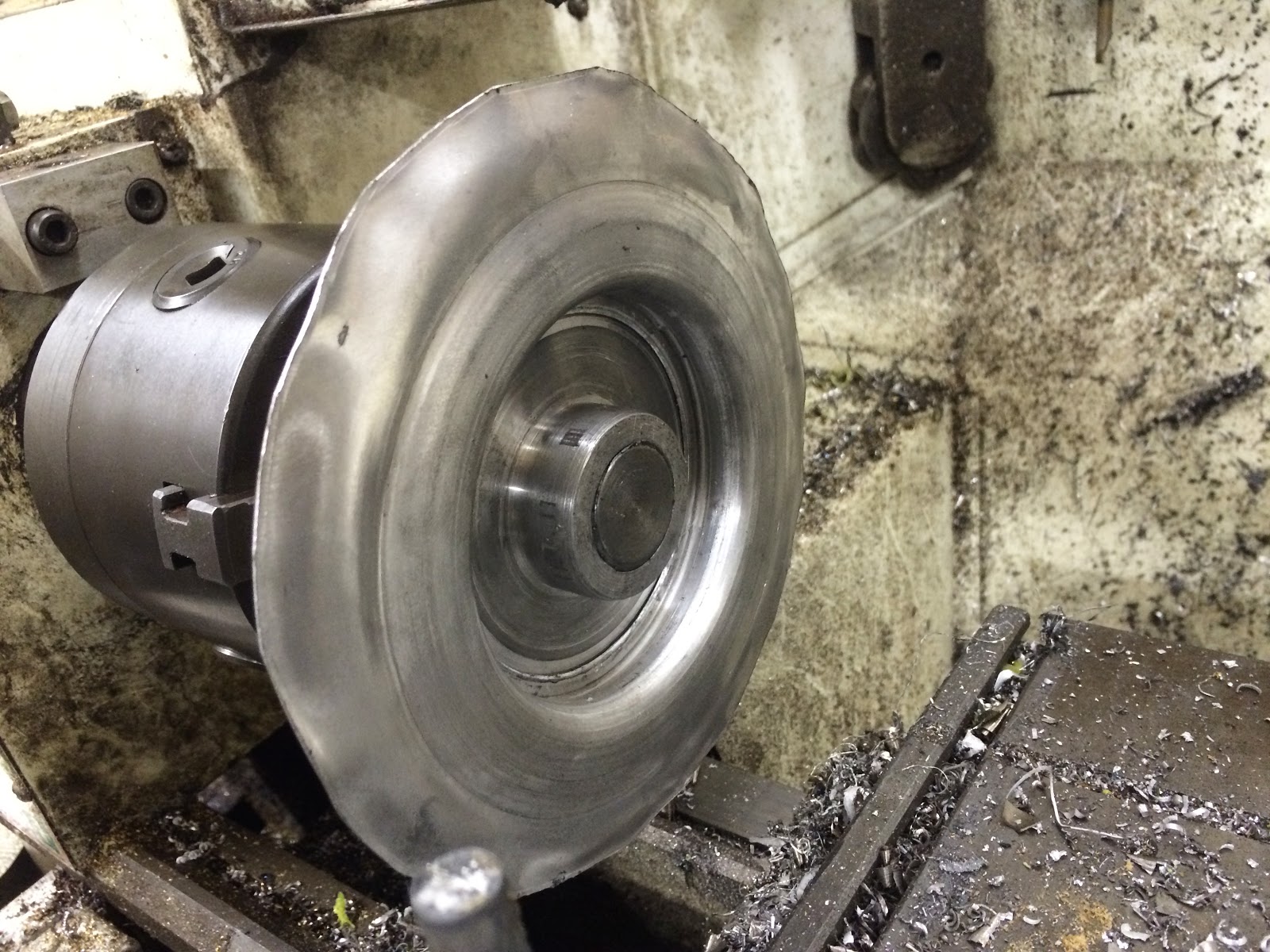 And a finished bezel on a lamp shell. 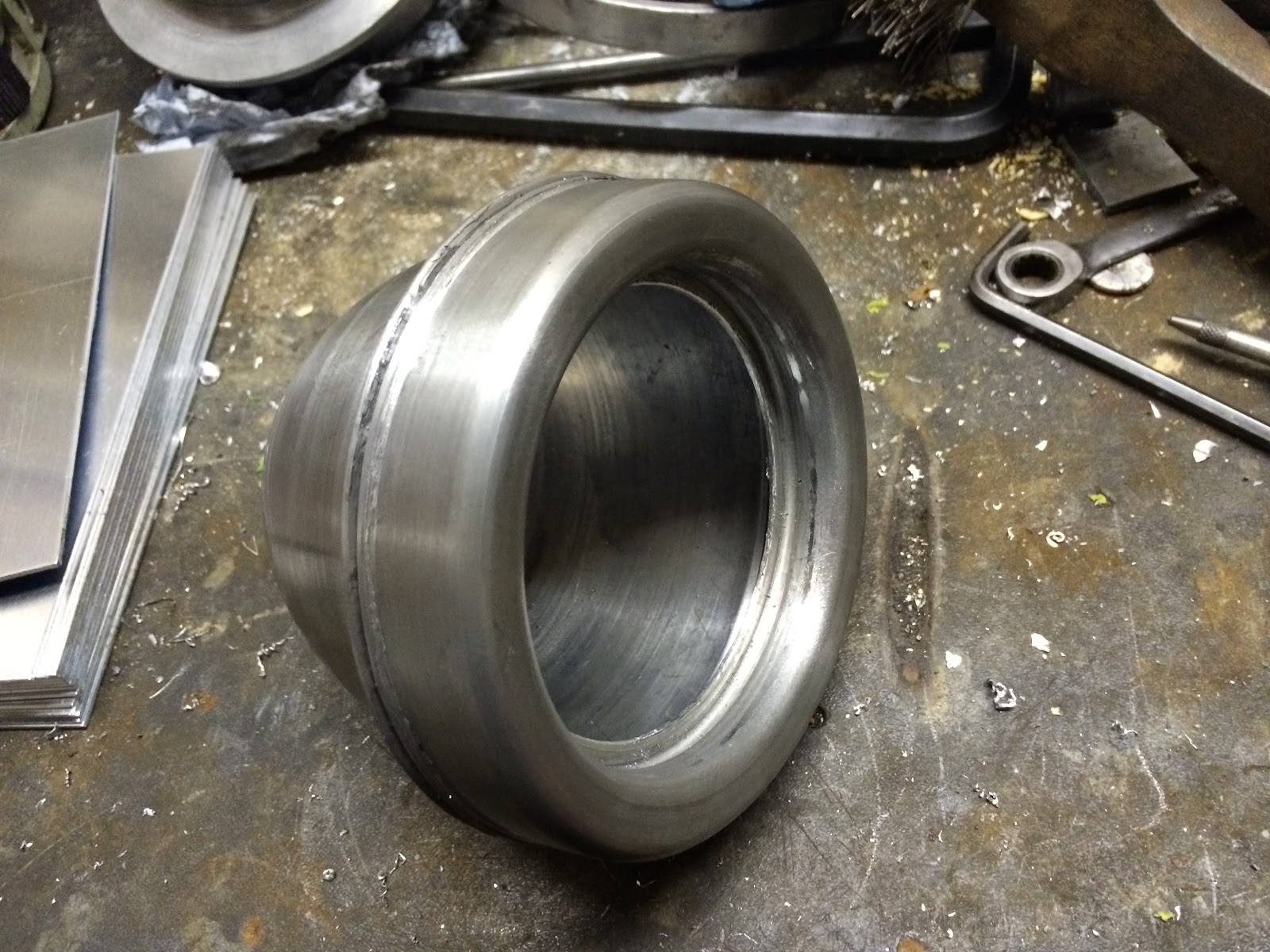 The mounting stalks were made on the lathe by turning the stem with a large circular flange. I then CNC-milled the flange to the required trefoil shape and formed them to the required curvature to fit the lamps with a hammer. 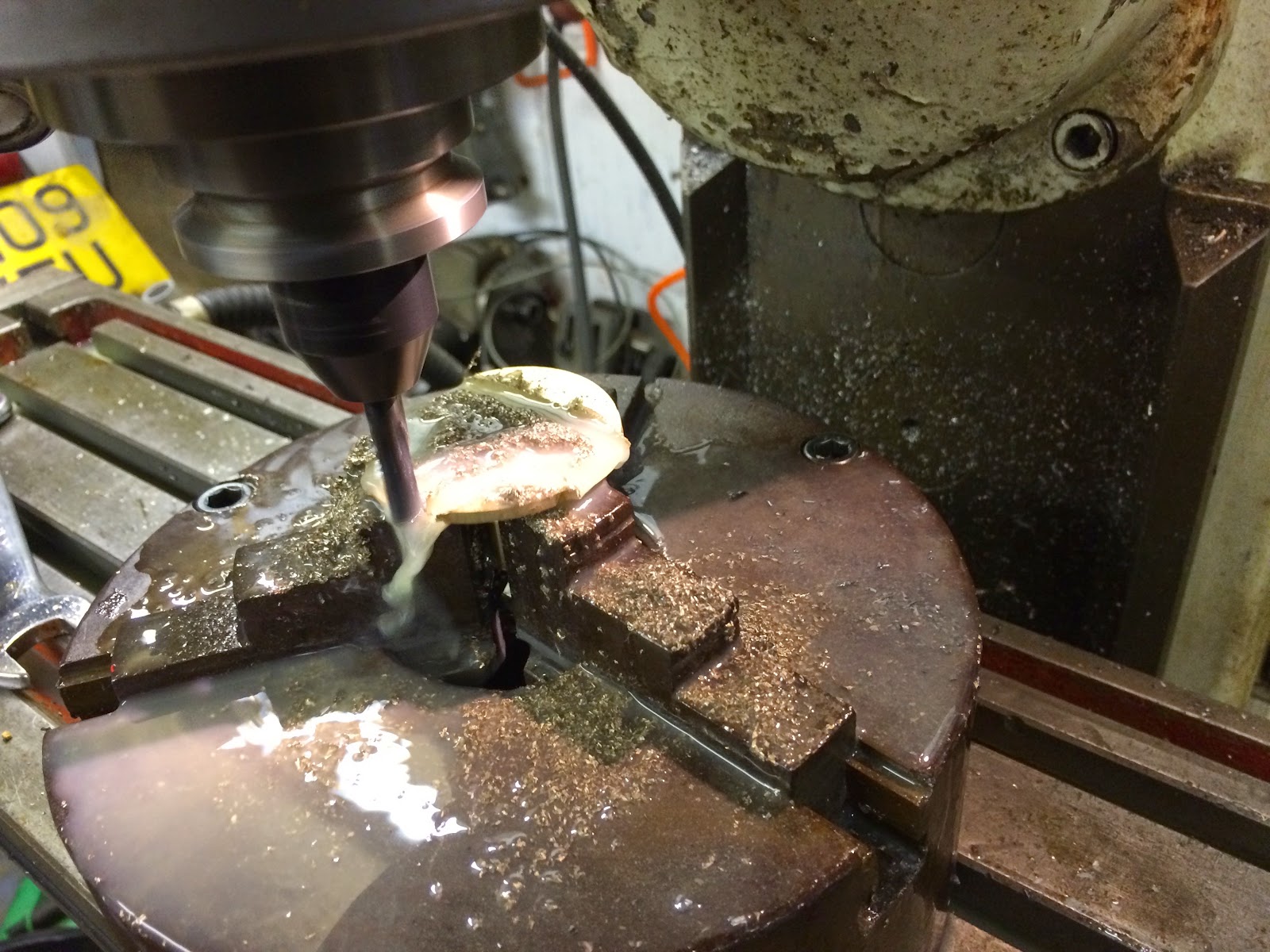 One good thing about all the failed lamps was that I had plenty of pre-formed material suitable for making the internal stiffener out of. 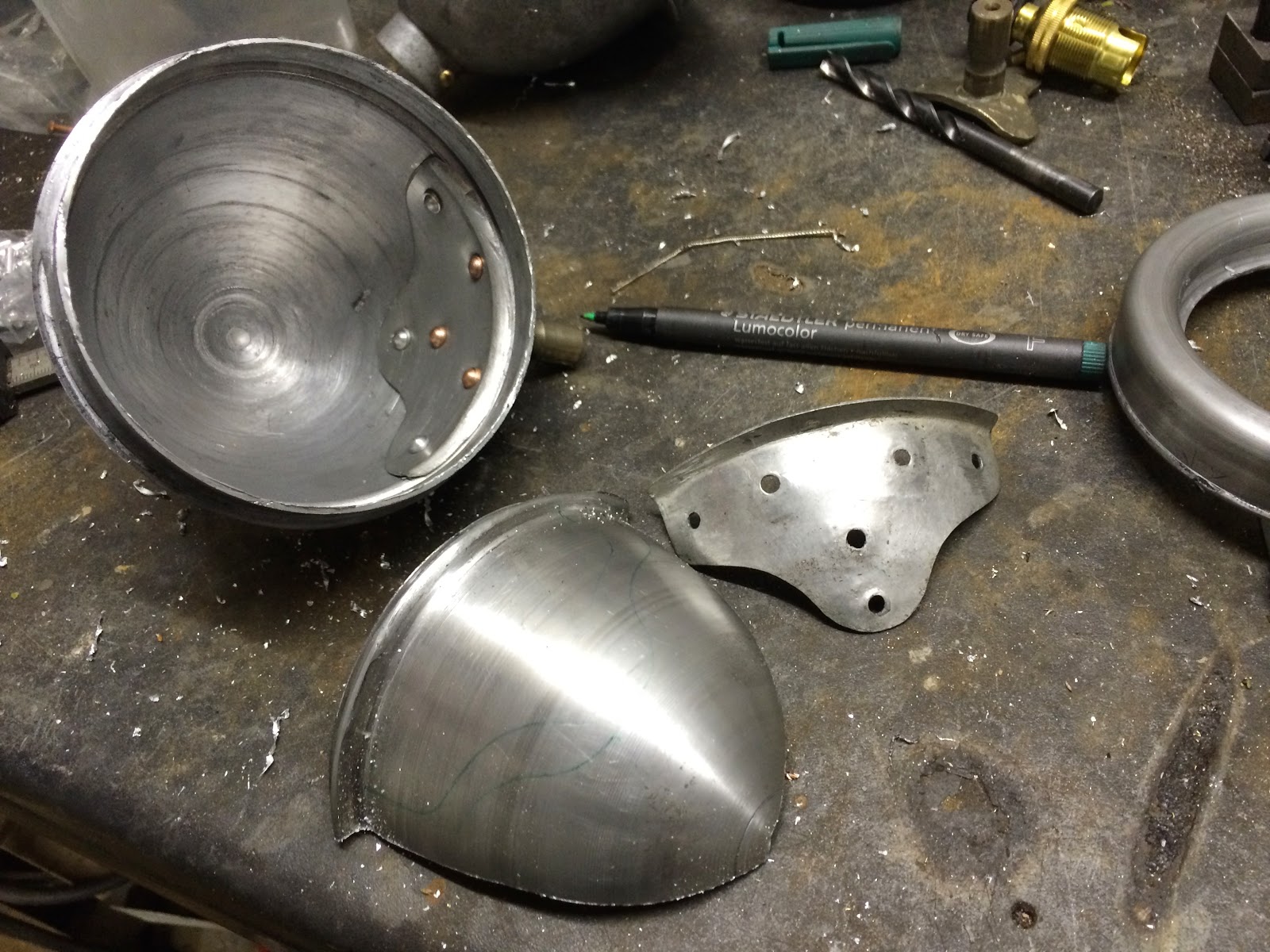 And then the stems could be rivetted on. 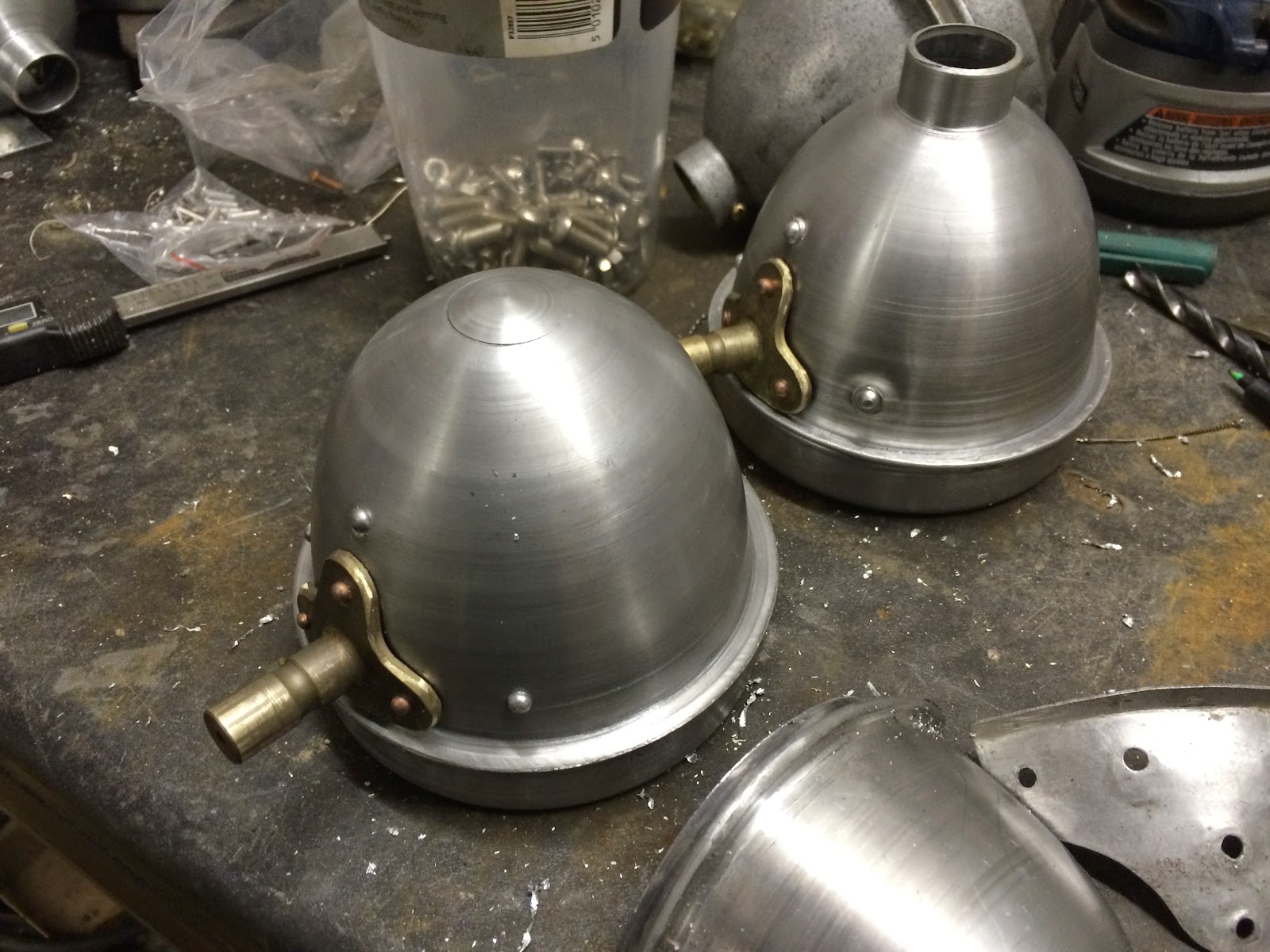 I could not easily find suitable glass circles. By all accounts tax-disc holders for motorcycles have the right size glass, but all the ones I could find were plastic. And I couldn't find many of those now that tax discs have been abolished.  After finding that the local glass cutting place was almost entirely unhelpful I eventually had a small brainwave and approached a local stained-glass workshop where the nice proprietress made me a set of four discs for a more than reasonable £15.

I persuaded my CNC mill to convert a 2" bar into a carved-from-solid mounting bracket and a rather large pile of not-mounting-bracket using the HSM CAM add-in for Autodesk Inventor. Luckily there is a 30 day trial, as at $10,000 to buy it, I won't be. However it is a first-class CAM system and knocks others I have tried into a cocked hat. 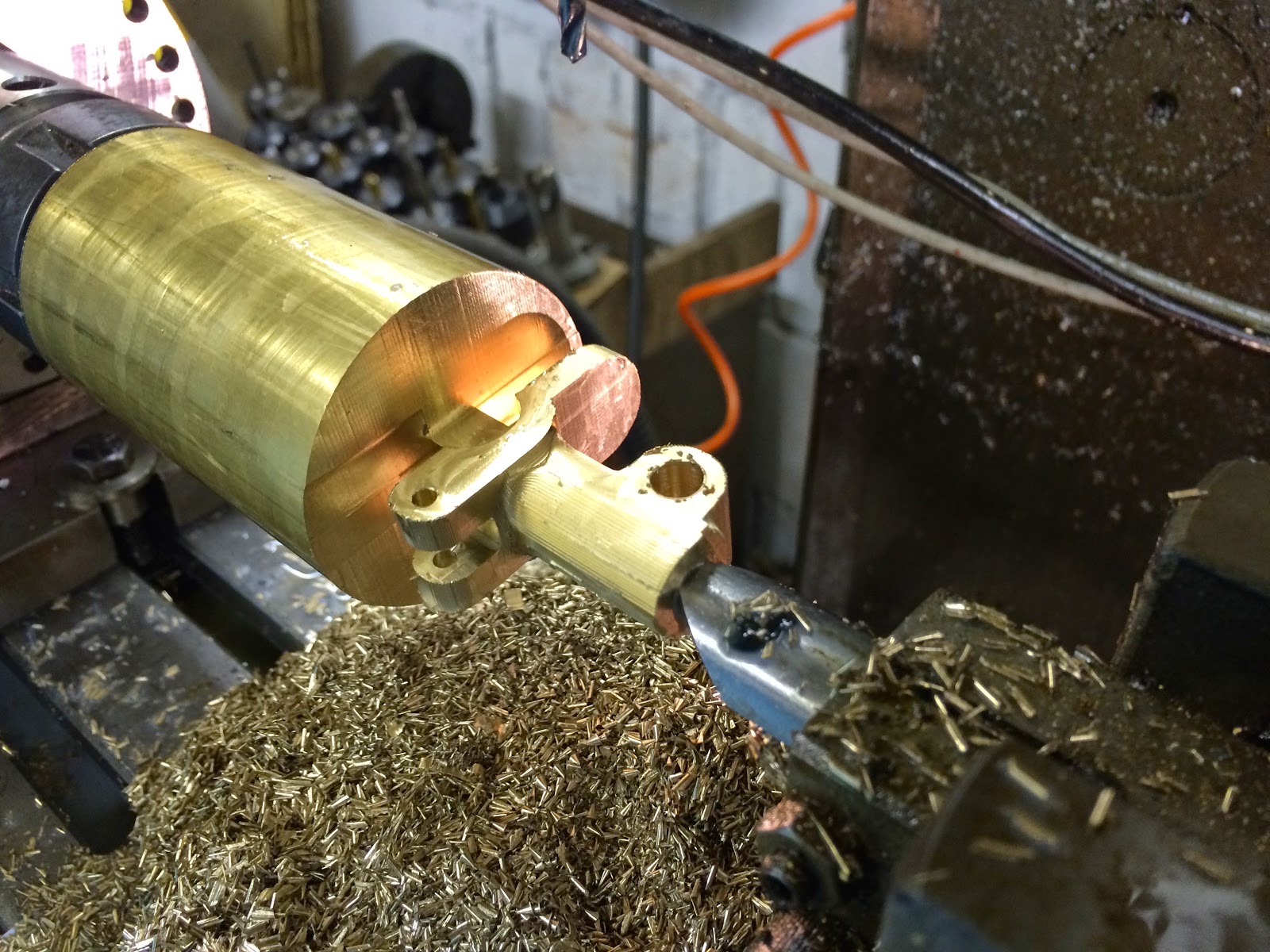 The other part of the clamp was machined in a broadly similar way, then after putting in the clamp-split: 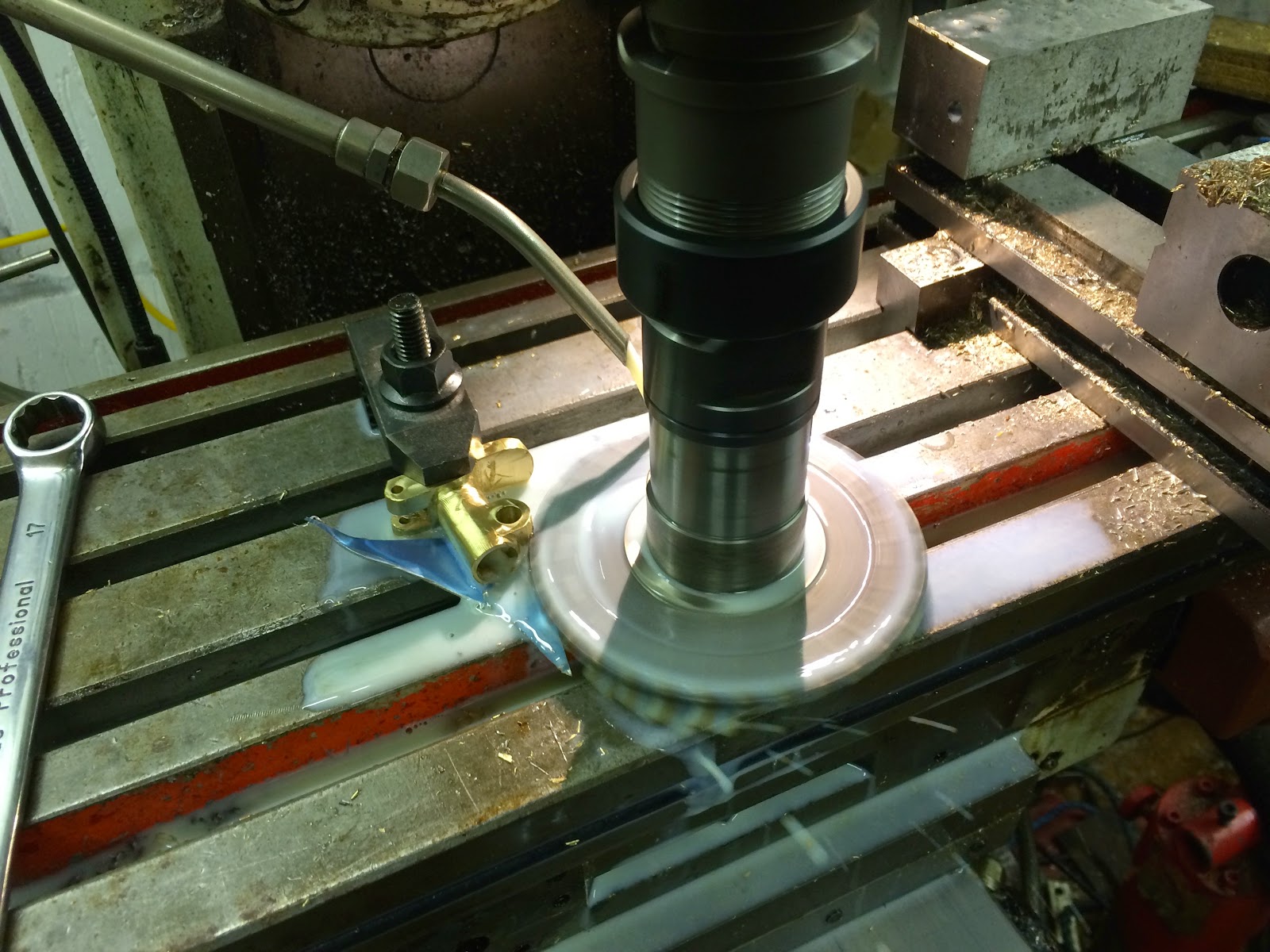 And rivetting in a hinge-pin the light were complete and ready to mount. (I admit to glossing over making the electric and acetylene fittings, and the clips and knobs that hold the bezels on) 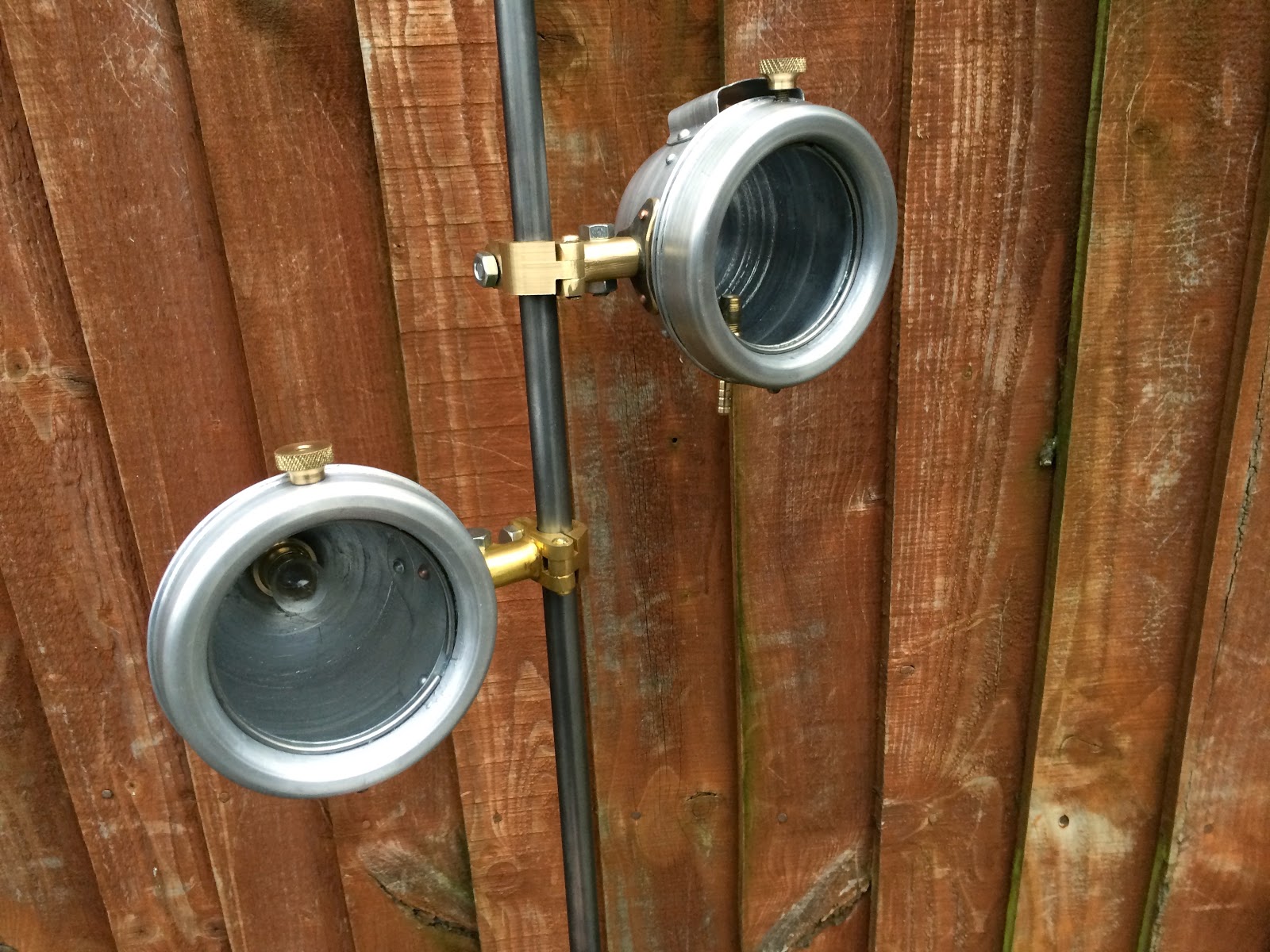 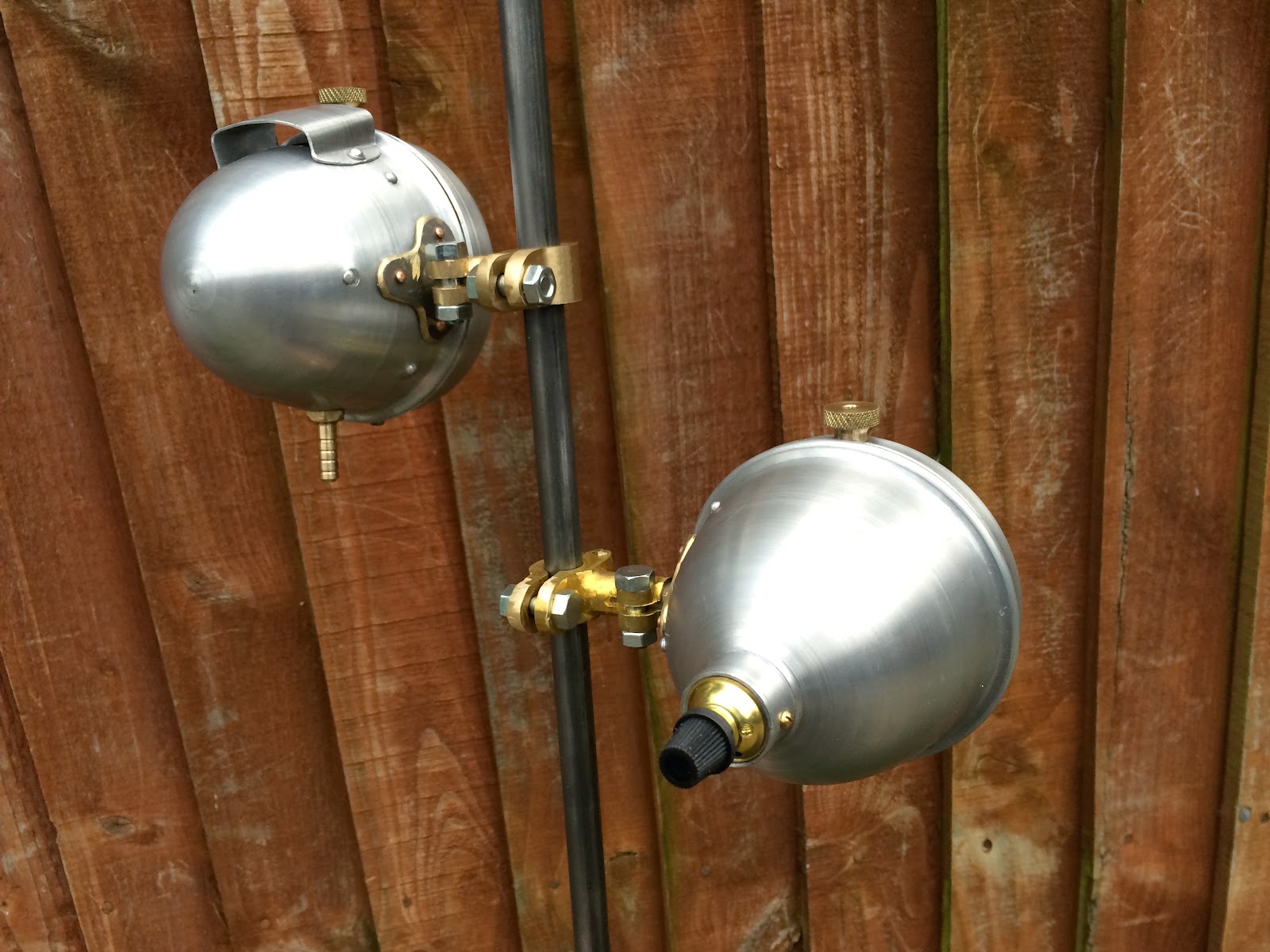 A bit of paint on the clamps, and the bike has its "eyes" back. And very googly eyes they are too. 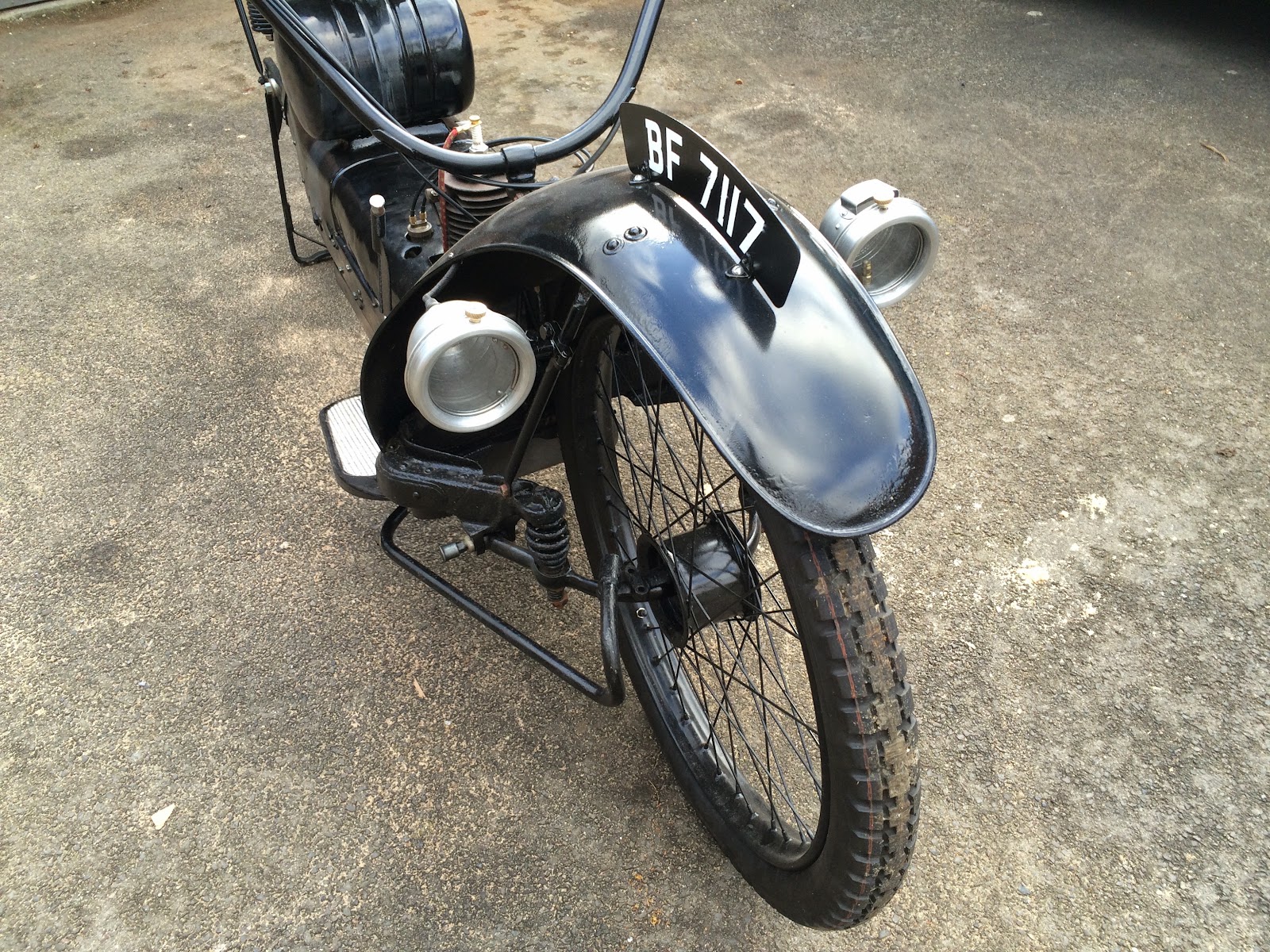 With the cable connected up, the light even works. 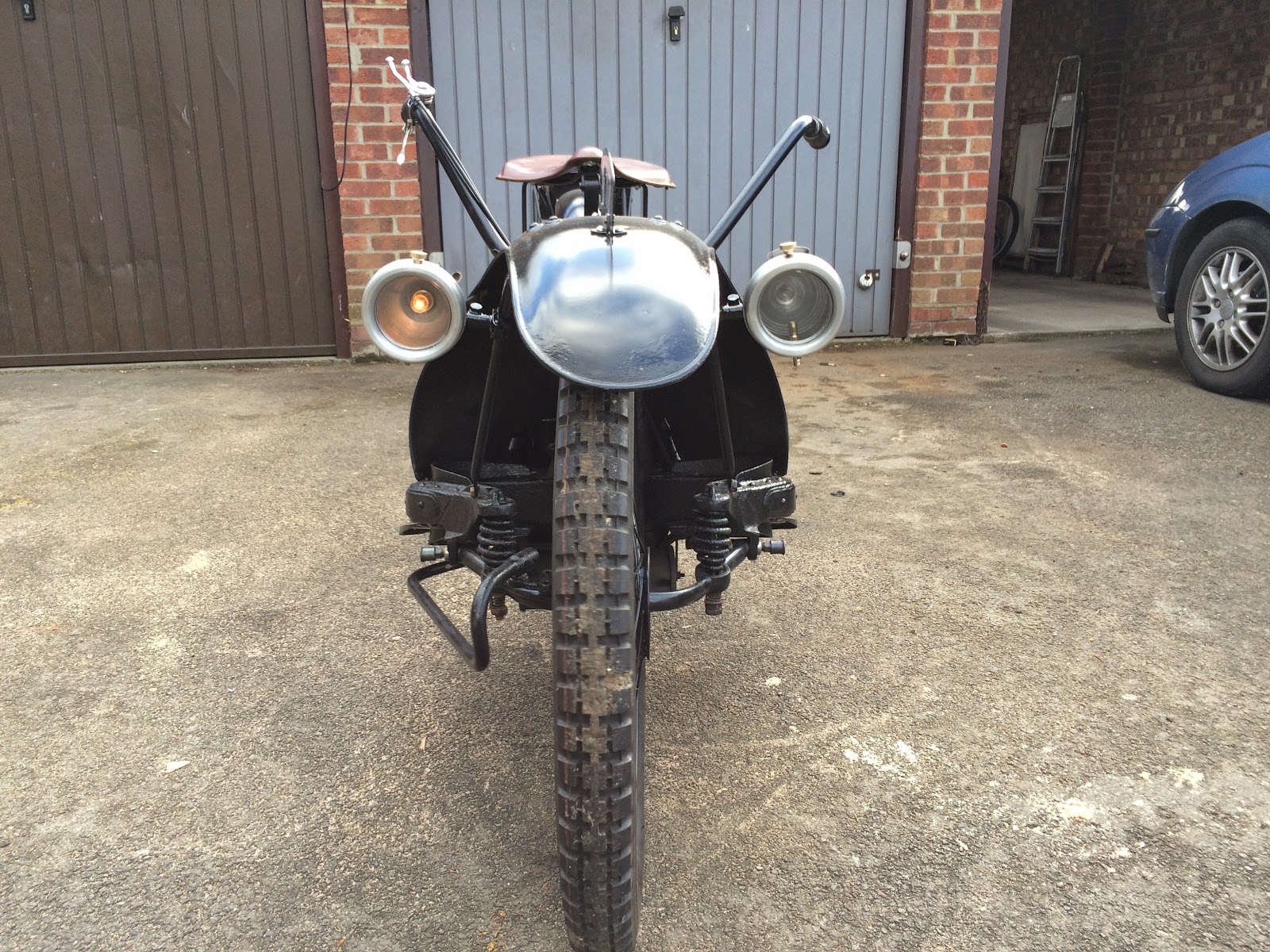 And this is the acetylene lamp running from my old caving generator. I suspect that it might be a more effective device than the electric one, in practice. 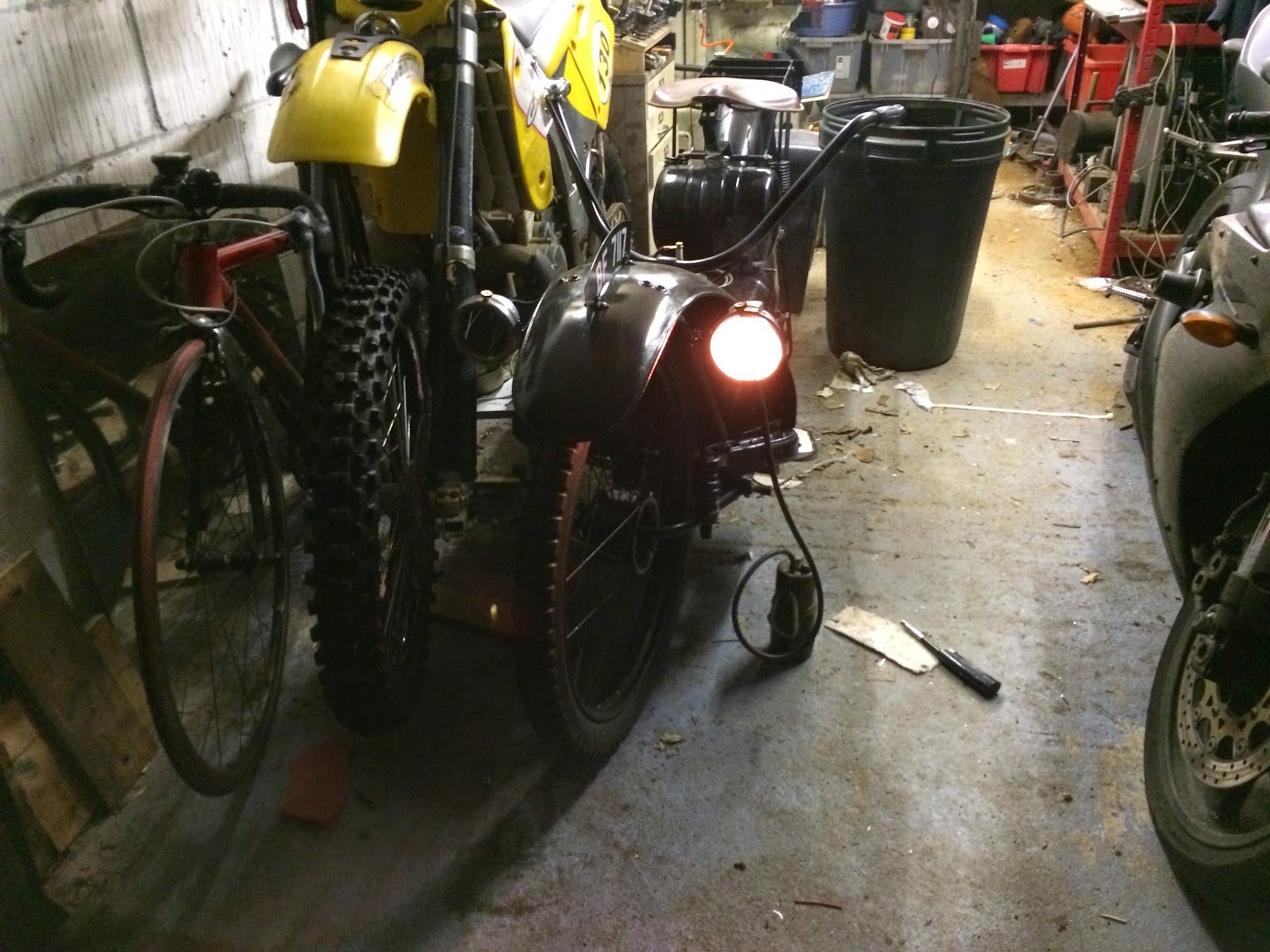 Email ThisBlogThis!Share to TwitterShare to FacebookShare to Pinterest
Labels: Neracar, Neracar11 The Eyes Have It