As documented in a previous instalment of this blog about 18 months ago I made an oak stand for the Rivett 608 that I bought in an eBay accident. What I don't mention in that entry is that when I got the lathe working I then realised that the slides were badly worn. So I took it apart to investigate.

The Rivett 608 has a rather strange design. The saddle is on the front of the bed, sliding in a dovetail. The reason for this is unclear, but Rivett were full of curious ideas like that. 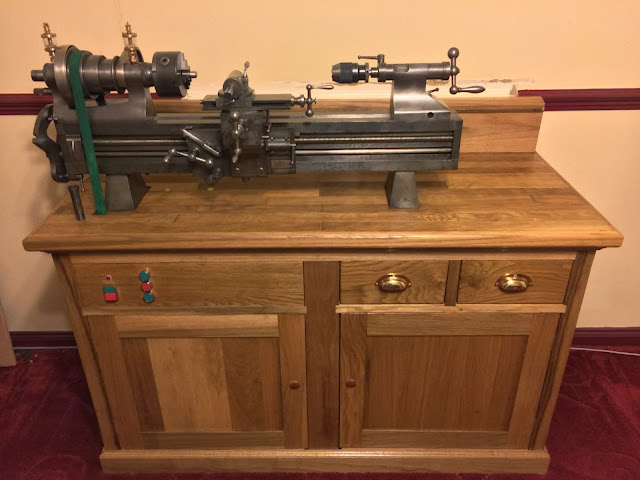 It appeared that a previous owner had re-ground the external faces of the bed, but had not done anything to the internal dovetail.
Unlike every other dovetail in the world the Rivett saddle dovetail bears on all 5 faces. This was achieved by very careful scraping by someone who was so proud of his skills that he signed the back of the serial number plate.
So, the effect of the external grinding was that the outer vertical faces no longer contacted the saddle, transferring the forces to the internal bits between the feed shaft and leadscrew and the sloping dovetail angles.
I managed to re-scrape the saddle so that all three vertical faces were simultaneously in contact (if the Blue was applied thickly enough) but I got rather discouraged by my attempts to scrape the internal angles. It was looking like it would be very hard indeed to check those faces for angle and straightness and parallelism to the top surface of the lathe.
Another problem is that the Rivett dovetails (in another departure from accepted practice) are perfectly sharp-cornered, with no relief groove as is normally seen. Which makes scraping even more difficult.
So, the lathe stayed in bits for a few weeks, and then a Ner-a-Car project came along, and weeks became months. Then months became a bit over a year.
In the interim I bought a new lathe, a Holbrook Minor for conversion to CNC. I made the decision that I wouldn't allow myself to start on the Holbrook until the Rivett was back together and capable of making parts.

I decided that what I needed was a planer, like this nice one on YouTube. It is almost certain that that is how the dovetails would have been originally cut.
However, I couldn't find one locally, and then had the idea that perhaps I could simply plane it by hand. It works for wood, after all. But the problem with that would be holding the cutter in line with the lathe bed. Some sort of linear guide would be needed. I considered a number of possibilities then it finally struck me that I was over-complicating. If I want to be parallel to the top surface of the lathe bed then I should use the top surface of the lathe bed...

So a plan was born. I scavenged around the workshop for a bit of flat plate that I could put a hole in the middle of, but then my eyes fell (figuratively) on an old Myford motor plate. After a skim flat on the mill and the addition of some adjustable brass guides and a spare lathe compound slide, I had the device ready.

The first thing to do was to get the angle right. I did this by mounting a dial indicator in the toolholder, and winding the slide up and down in various places until the reading did not change. 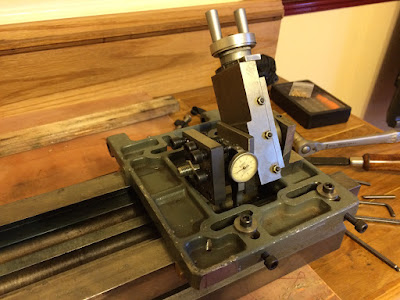 Once the angle was set I replaced the DTI with a lathe tool, and set to work. 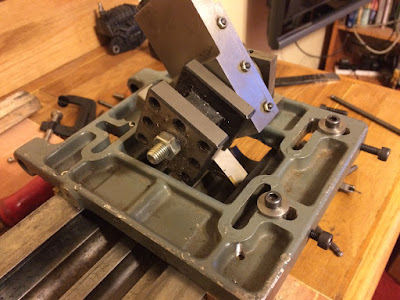 I even made an unexciting video of the process. A bit of light-scraping was needed afterwards to get the surface texture right, but the fit turned out to be rather astonishingly good.

The saddle adjusting gib had already been shimmed twice, and there was no way that it was going to be suitable for the new saddle position, so I set out to make a new one. The gib is 12" long, about 1" wide and 1/4" thick. Unfortunately the only cast iron bar I could readily find was 35mm diameter, so there was a lot of machining to do.

First I flattened off one side to about half way. 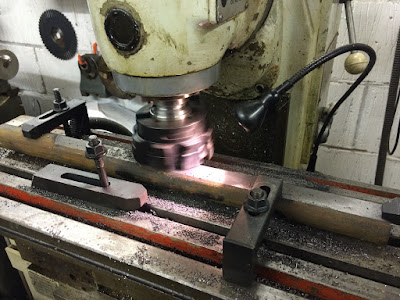 I had to progressively fit and remove clamps as the cutter moved across the work.
Then to hold the increasingly thin strip down I drilled and tapped a lot of M4 holes, and bolted it to a faced-off lump of scrap plate. 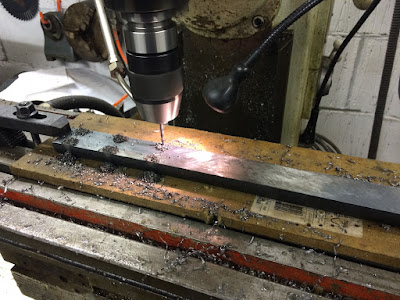 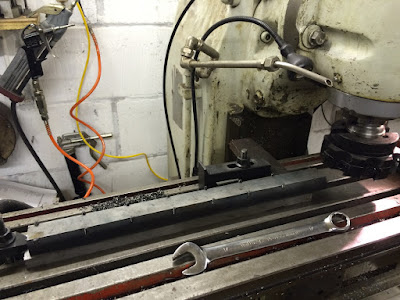 I was then able to mill the bar to the correct thickness and taper. (CNC makes this sort of thing really easy. G1 F50 X-350 Z8.05 sort of easy. At this point I was suddenly glad of the excess width that I had inadvertently bought, there would have been no room for screws with a more conservatively-sized bit of material.

With the thickness approximately right I was then able to cut down to width with a dovetail cutter to get the required angle. (my mill has a rotating but not "nodding" head. This process would be easy on a Bridgeport or similarly adjustable machine) 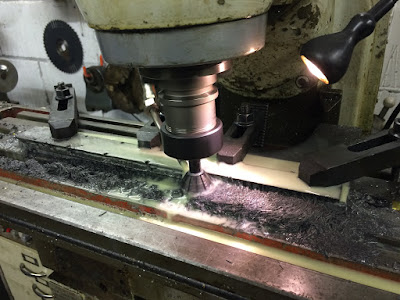 You might have noticed that the gib appears to be rather longer than 12". In fact it is 350mm, and would have been longer still but for the fact that 350mm is the limit of travel of my milling machine. I always get nervous around tapers, and like to make them long, try for size then cut off the excess.
In this case the gib slid through about 1" further than I thought it should from the measurements, so I was glad of the extra length.

The adjusting screw slots were next on the list, and those turned out to be a bit of a challenge because they are in the end of a long thin (and fragile) bit of iron.
I could have switched the mill to the horizontal head, but that is a fair bit of effort, and I hit on a way of doing it with the lathe which actually worked rather well. 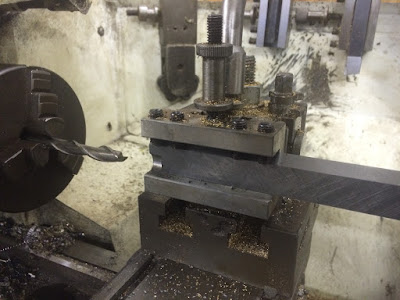 And here is the finished gib installed on the saddle. It is on the limit of adjustment, as it is only ever going to get looser. (No, you can't really see it. ) 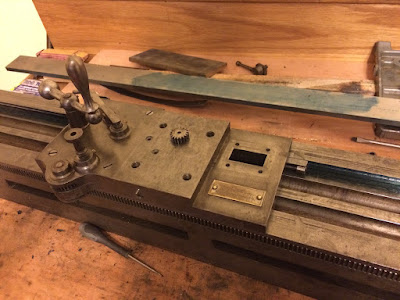 The next problem is that the saddle sits low in the bed. It always would have done, regardless of the method used to sort out the dovetail wear. I think that I can get enough adjustment in the saddle angle screws for that to fit, but the offset is enough to make the leadscrew bind in its very tight slot, and to make the power-feed bevel housing foul the bottom of the lower slot. So a little more work to be done there, but I think I have workable solutions.