I have been getting increasingly dissatisfied with my cheap Chinese lathe. It is a cheap copy of the original Emco 7x12 lathe (itself a cheap lathe) stretched to 9 x 20 purely by lengthening the bed and increasing the centre height. It then has a milling head bolted to the back, to also make it a rather poor milling machine. I spent a fair amount of time and effort converting the machine to CNC, but eventually decided that the mill wasn't really good enough, and converted a Harrison Universal Milling machine to CNC too.

Having decided that a better lathe was needed, I then had to decide which one. The Harrison M250 seemed like a good candidate as they are very compact for the capacity, and lots of them are being removed from schools where they have almost never been used. However I am not the only one for who that is a good set of features, and so the M250s (and the bigger M300 and M350) end up selling for quite a lot of money. I then accidentally found an advert for a Holbrook Minor, and after a bit of research on lathes.co.uk I decided that they had quite a lot of nice features that lend them to CNC conversion. They don't have any gears in the head, but instead use a variable speed drive and a 2-speed electrically-controlled gearbox. The feed is by a DC motor, rather than geared to the spindle too. But, mainly, I like the look of them.
As it happened, the lathe I found on Gumtree had been sold months ago, but then another one appeared. 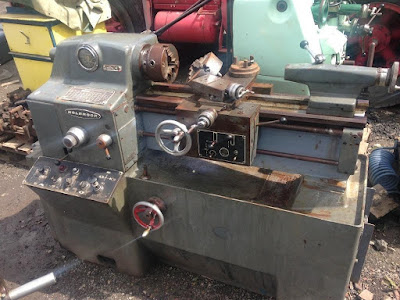 Unfortunately the lathe had been stored outside for a while, and had managed to get a bit rusty. However lathes always look a lot dirtier and rustier in photos, so I decided to have a look.

The Holbrook Minor is diminutive only in name. It weighs 750kg, so when I went to look at it I took a van and a 2-tonne engine crane.

It will come as no surprise that I bought the lathe, otherwise the blog entry would be a bit pointless.

Loading it into the van was pretty easy, the place it was being stored had a telehandler. 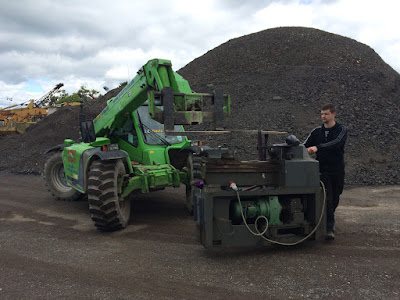 The picture shows the drive-train rather nicely. The flange-mount 3hp 3-phase motor bolts to a Kopp Variator.  there is then a short drive-shaft to a 2-speed gearbox with two electrically operated clutches and a brake.

When I got the lathe home it was a simple matter to lift it with the engine crane, then drive the van out from under it.

Actually, that's a lie. It was a horror of a manoeuvre, mainly because the 2-tonne engine crane (from KMS on eBay) appears to be made from cheese. I had the boom in the 1-tonne position, but with the van half-way out from under the lathe, this happened... 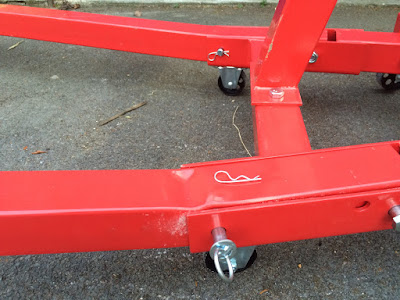 This left me with my newly purchased toy trying very hard to fall over and out of a van, and seemed quite keen to wreck the (hired) van in the process. Luckily a neighbour was at hand and he was able to quickly find a trolley jack, and another neighbour had left some bits of wood lying about. We were able to stabilise the situation with the jack, and then have a re-think about how to proceed. It turned out that the crane didn't bend any further in the 1.5 tonne position (and so it shouldn't, with a 750kg lathe) and that access for the crane was easier with the lathe half-way out of the van, so that this position could be used.
The lathe was then lowered on to the legs of the engine crane and an attempt to roll the lathe into the garage mainly served to prove that the 2-tonne engine crane doesn't have 750kg castors either, as they collapsed.
So, the lathe was finally rolled into the garage on several lengths of 1" pipe that I had plenty of. 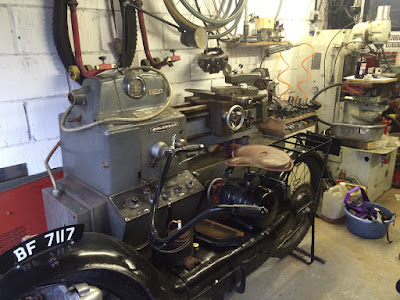 On a whim I decided to try the tailstock of the 9x20 Chinese lathe on the bed of the 10x20 Holbrook. It seems to demonstrate quite nicely the difference in scale between the nominally similar lathes.

To access the Variator and gearbox for oil-changes and maintenance I needed some way to move the lathe away from the wall. The engine-crane had proved unsuitable for the job, so I made a frame the can bolt up around the lathe, hook into the hold-down bolt recesses, and then be used to jack the lathe up onto castors to roll it around the workshop. I am pleased to say that this actually works nicely. 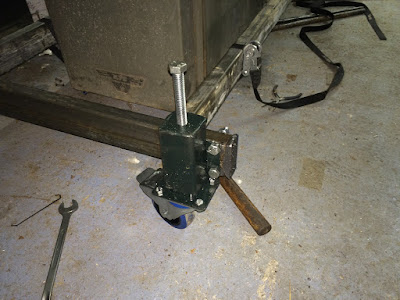 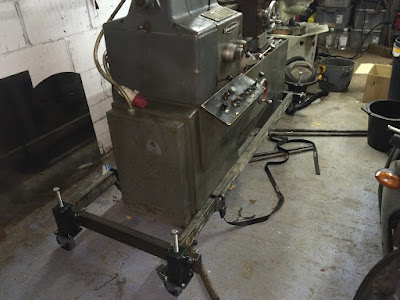 The eagle-eyed will spot that the lathe is actually hanging on a strap in the photos, I forgot to take any  after I had made the hooks, and these photos are of a test move to make sure that the (simple) screw jacking system works.

Once the lathe was home I almost immediately obtained a manual (including the circuit diagram) from lathes.co.uk.

The Minor was quite a high-tech lathe for the day (the contactors had a production date of 1968), and this is reflected in the unusual complexity inside the control cabinet. 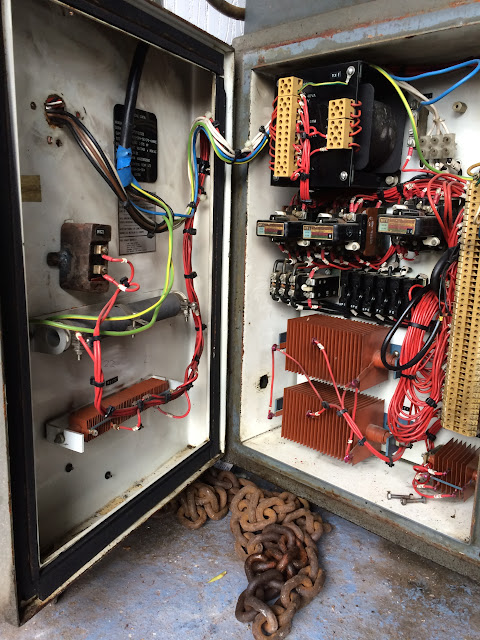 At the top-left of the main box is the transformer that produces 24V control power for the gearbox, 110V of the contractors, 300V for the DC feed motor and 50V for the low-voltage light from a 440V 3-phase input.  Below that are the reversing contactors and the main on-off contactor Then an overload trip unit, and a rack of fuses. The large finned double-bank Selenium Rectifier converts the feed-motor armature current to DC, the one in the door is the field-coil bridge rectifier and the one at the bottom-right is the 24V bridge for the gearbox clutches.

The variable speed DC motor achieves variability by passing the 300V AC through a Variac on the control console.
At least I think it is a Variac, the wiring diagram shows a loopy version of a potentiometer, but the abbreviation "VR1" seems odd for a Variable Transformer.

To run the machine in my garage I needed to make all that work on 240V single phase. The first thing to do was to re-wire the spindle motor in delta configuration. Unusually I needed to make jumpers for this, as the motor has an unusual circular terminal layout, and the star-mode jumpers could not be adapted. 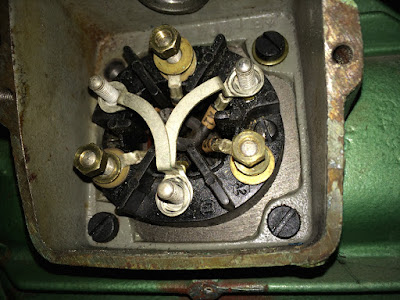 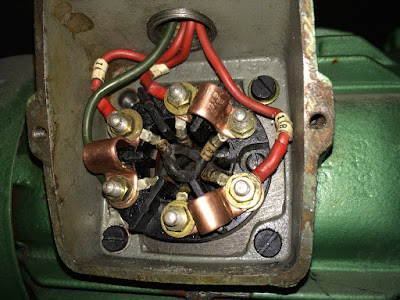 With the motor now converted to 240V operation I could use a Variable Speed Drive (VFD) to generate 3-phase. I found a suitable 2.2kW drive from a vendor on eBay for £83.
I tried to retain as much of the original control wiring scheme as possible. This may seem odd when the plan is to convert to CNC, but I wanted to test the lathe out first.
The original Forward/Reverse joystick contacts were wired to the VFD FWD/REV terminals and I added a 240V coil contactor as the no-volt release main contactor. The lathe came to me with a key-operated switch but no key, so I replaced that with a 22mm dual push-button start-stop to control the contactor.

To control the 2-speed gearbox I installed a DIN-rail mounted 24V PSU (also from eBay) and again this was wired through the original control wiring.

The DC motor originally ran from a 300V output of the transformer for the field coils and the 240V between neutral and Phase 1 for the armature. I wired both these to 240V single-phase power through a couple of modern 35A silicon rectifier bridges. I didn't need 35A, but that size from Maplin have handy Faston terminals and a central mounting hole.

It proved to be rather easier to re-wire the suds pump for 240V as that was just a matter of moving wires: 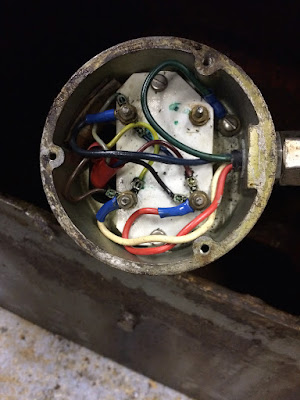 Rather than use a small VFD for the suds pump I chose the much cheaper route of using a capacitor to synthesise a third phase. For simplicity this was mounted in the control cabinet. So the coolant switch now just switches live + neutral  and then back in the cabinet again the third wire to the pump is connected to one side of a Motor Run Capacitor and the 240V Live to the other side of the capacitor and the first terminal.

And here is how the control cabinet now looks: 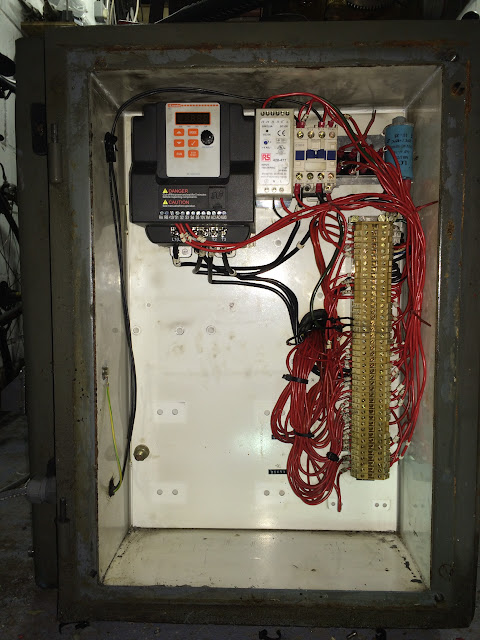 There is quite a lot more room in there now. Time will tell if there is enough for a PC and servo drives to run the lathe in CNC mode.
At the top, right to left: The Lovato 2.2KW VFD, then (on DIN rail) a 24V PSU, 240V contactor, a pair of rectifier bridges and the suds-pump capacitor.

After one false-start where it turned out that the current through the power-on lamp was enough to keep the contactor engaged (I had misunderstood the wiring scheme slightly) the lathe now has all the features that it had originally, but runs from 240V single-phase.

Before anyone comments: Yes, I need more individual earth cables.