The previous post (some considerable time ago) ended on a slightly downbeat note as I had found significant bed wear. Well, the good news is that it seems to have largely gone away. I don't know what happened, maybe things were a bit out of place and have now settled down, but the wear is now just enough to make the carriage a bit tight at the tailstock end, rather than enough to make it loose at the chuck end, so I decided to press on with the rest of the project.  First I tightened the nut retaining the Z-screw, which turned out to be a slightly interesting task, so here is a picture. I used a large ring spanner on the nut, and then used an ER32 collet chuck on the bearing surface of the other end to apply the counter-torque. Luckily this lathe is 20" between centres and not 60".

I had previously ordered a casting to contain the X axis drive chain, and the first thing to do was to machine it and prepare the housing for the angular-contact bearings. 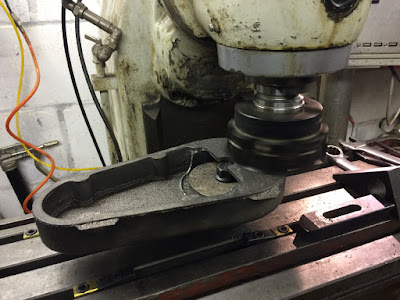 The bearing preload is supplied by a screwed-in cap, with hole spacing to suit the pin-spanner of my angle grinder: 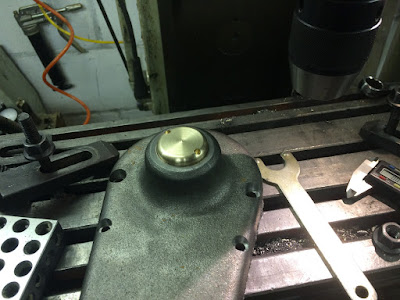 At this point I made the first irreversible change to the lathe. I cut off the extension that the taper-turning attachment connects to. My lathe came without the taper-turner anyway, but it still felt like a step too far. However my workshop is small (very small), and with the lathe close to the wall, the extension hits the wall before the tool gets to the centre-line, so it had to go. 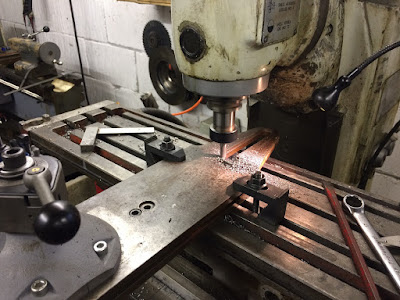 I also needed to slightly increase the size of pocket in the slide to make room for the ballnut. I had tried all sorts of ways to squeeze it in without doing this, but it was just too difficult. Only 1mm in width and 2mm in depth needed. 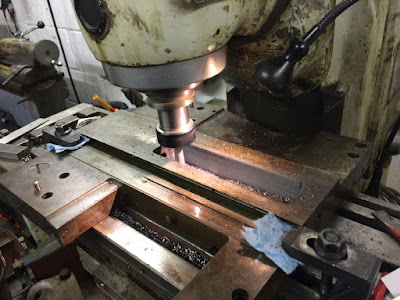 And here is the screw and nut in place. The block clamps round the ballnut thread, and then the threaded hole is how the cross-slide is connected. 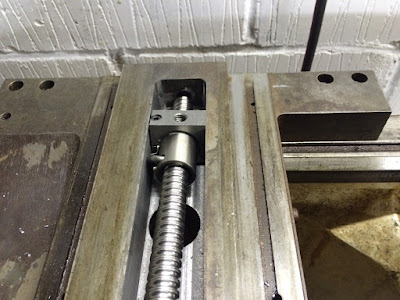 The new screw does not sit in exactly the same place as the old screw. I thought long and hard how to bore the new housing for the end-bearing in the correct location, and finally came up with the idea pictured below. I pushed the slide all the way back so that the nut was right against the back face, snugged up the gib and tightened the slide-to-nut screw. Then I squodged epoxy putty into the gap around the ball screw end (which had been previously machined for a bearing). When the epoxy was set I was able to unbolt the cross-slide and slide it off, then centre my coaxial indicator on the centre-hole in the end of the screw to exactly align the horizontal milling spindle with the screw. Then the screw was tapped/prised out and the bearing housing was bored with my Wohlhaupter boring head. 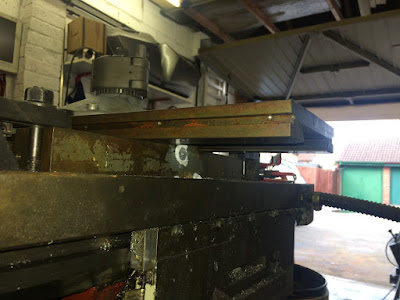 The next three pics show how I made a path for a proximity sensor cable (the X-axis home and limit switch) back into the apron casting where the electronics is. I used a CAD package to work out the compound angle required to get from the proximity sensor bore up and over the V-way and into the leadscrew tunnel. 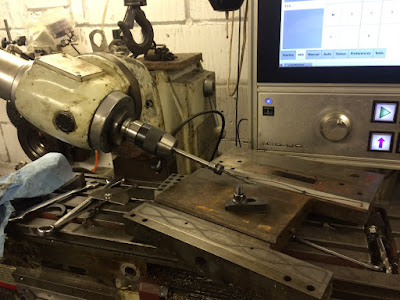 All blanked off by a little phosphor bronze plate. No reason for the material, except I had some in the right thickness.

The proximity sensor uses two shallow holes milled in the underside of the cross-slide as targets for homing and limit. In normal use it is never exposed, the photo below was taken with the connecting screw removed and the slide pushed back. 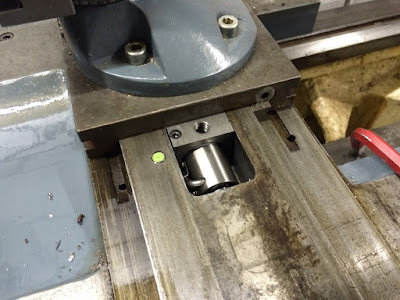 Also visible in the photo above are the oil grooves for the oiling system, and the fact that I made a new, shorter, gib-adjusting screw out of a shoulder socket screw because I had a clearance problem.
The oiling system is fed from an oil sump in the apron, and feeds oil to the cross-slide and saddle ways. I don't think it lubricated the compound or the screw directly. I thought about an electronically controlled oiler based on a solenoid, but decided not to bother. 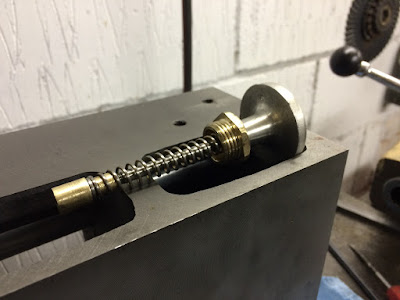 This is the new pump piston, which simply fits in a bore in the apron casting. I had made provision for this in the casting shape, though I had perhaps not given quite as much thought as I should to the oil routing from the pump to the saddle. I ended up with a very wiggly copper pipe and a drilled grub-screw at each end to swage it and hold it in a counter-sunk hole. 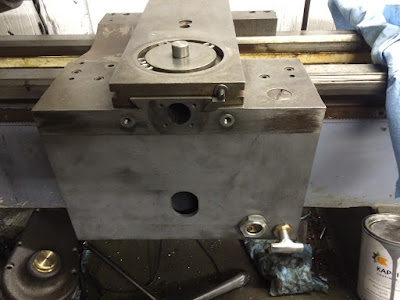 Around this time (looking at the photo dates) I decided to move the VFD nearer to the motor and further from the PC to make a bit more space. This was partly necessitated by the purchase of a rather bigger VFD, as the first one seemed to struggle a lot. I am not sure why, but the 3hp VFD over-currented at 12A whereas the new 4hp VFD runs the motor nicely at a max of 6A.
Anyway, whatever the reason, I made a bracket: 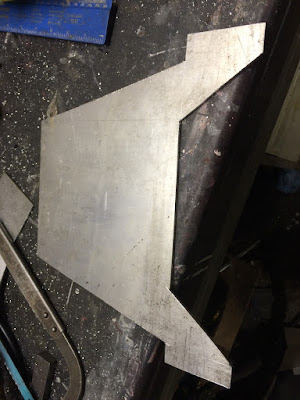 And mounted the VFD in the new position. 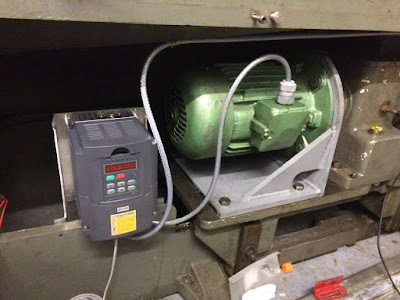 In a fit of zeal, I started painting things with Tractol Paint, recommended somewhere on the Internet for painting machine tools. I chose 7031 - Blue Grey as the colour, which I thought was close to the original Holbrook colour, though in practice is a bit more blue. 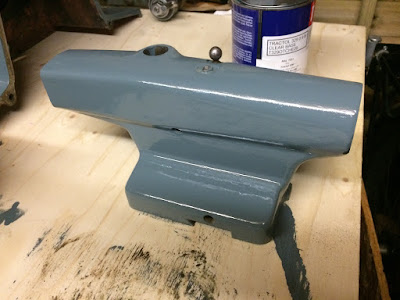 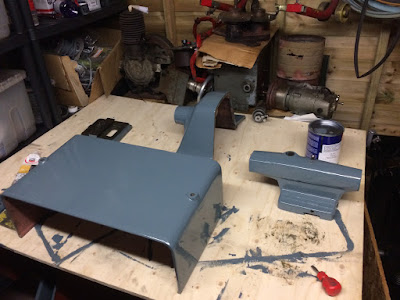 If you are wondering why the  sudden switch away from the X-axis drive and onto other things, it was because I moved the lathe to the other side of the workshop to get to the VFD and motor. This also seemed like a good time to fit the monitor post and to paint the back of the lathe and rear covers. 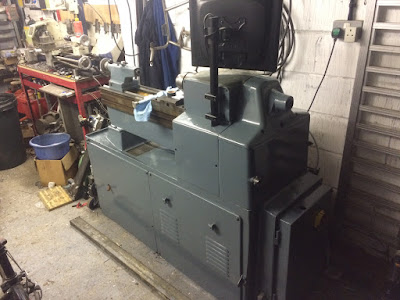 As part of my policy of not having any visible wires (my first retrofit is positively festooned with them) I led the wires up through the bed, up the monitor tube, and out the top.

Much late-night cogitation was expended in figuring out how to mount the X-axis servo in such a way that the chain tension could be adjusted without taking the saddle off the machine. (A more than slightly tedious process)
In the end I came up with the idea of using a mounting plate with two T-slots, clamped up by the two lower screws that hold the chain cover, and with a second screw up through the bottom to apply a tension adjustment. 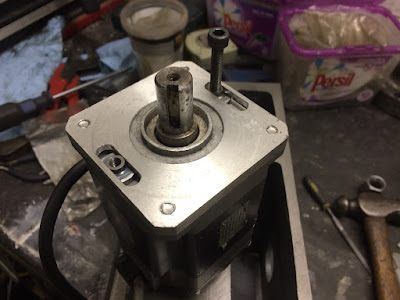 And here it is in place, except with much shorter screws and minus the chain cover. The sprocket drive is taken through another tapered interface between the sprocket carrier and the ballscrew. Morse-like angle but a non-Morse dimension. One nut clamps the bearing inners against a thin spacer, and pulls the taper into the sprocket carrier. Having learned my lesson with the Z-screw there is a little hex milled on the end of the X-screw to apply counter-torque.

I had decided to have a pair of jogwheels on the actual apron. If I had planned these in time their bosses could have been part of the apron casting, but perhaps that would have been a step too far. I machined some aluminium mounting plates, and wired them to a Mesa 7i73 inside the apron. This also interfaces the proximity sensors and an extra rotary switch which will eventually adjust the jog-increment. It also has a push-action button included, though I haven't yet decided on a function for that. Any ideas? All the IO is interfaced through a single CAT5 cable this way, which seems like a good plan when it all runs in a cable chain. I got special oil-resistant cable-chain rated wire. 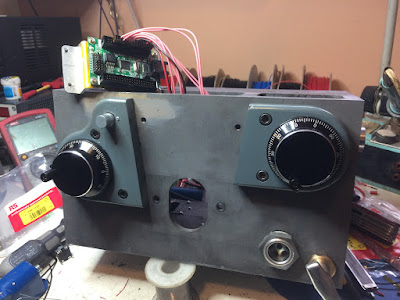 A stainless box protects the end of the cable chain for the apron. The cable chain contains the CAT5 for the 7i73, the servo motor power cable and some special resolver/encoder cable I found on eBay. 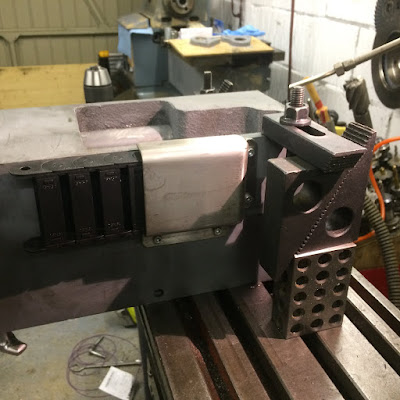 It was all a bit floppy and awkward at this point as I made the connections to the motor and 7i73. The motor uses a pair of Lemo connectors and the CAT5 is just a normal RJ45 plug. Which feels like two ends of the connector-quality spectrum. 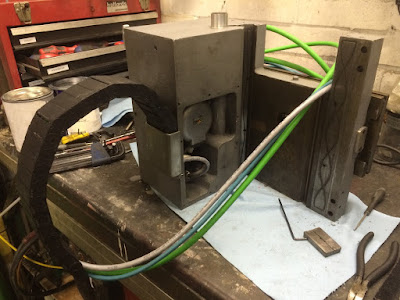 The cables were pulled through a conduit. Not after some struggles, and in fact I had to split the bend in half and re-assemble with cable ties to get the cables round the tight corner.

I was then able to assemble the lathe and start making parts!

Which seems like a reasonable place to end this edition of the blog. I hope both my readers are still awake :-)